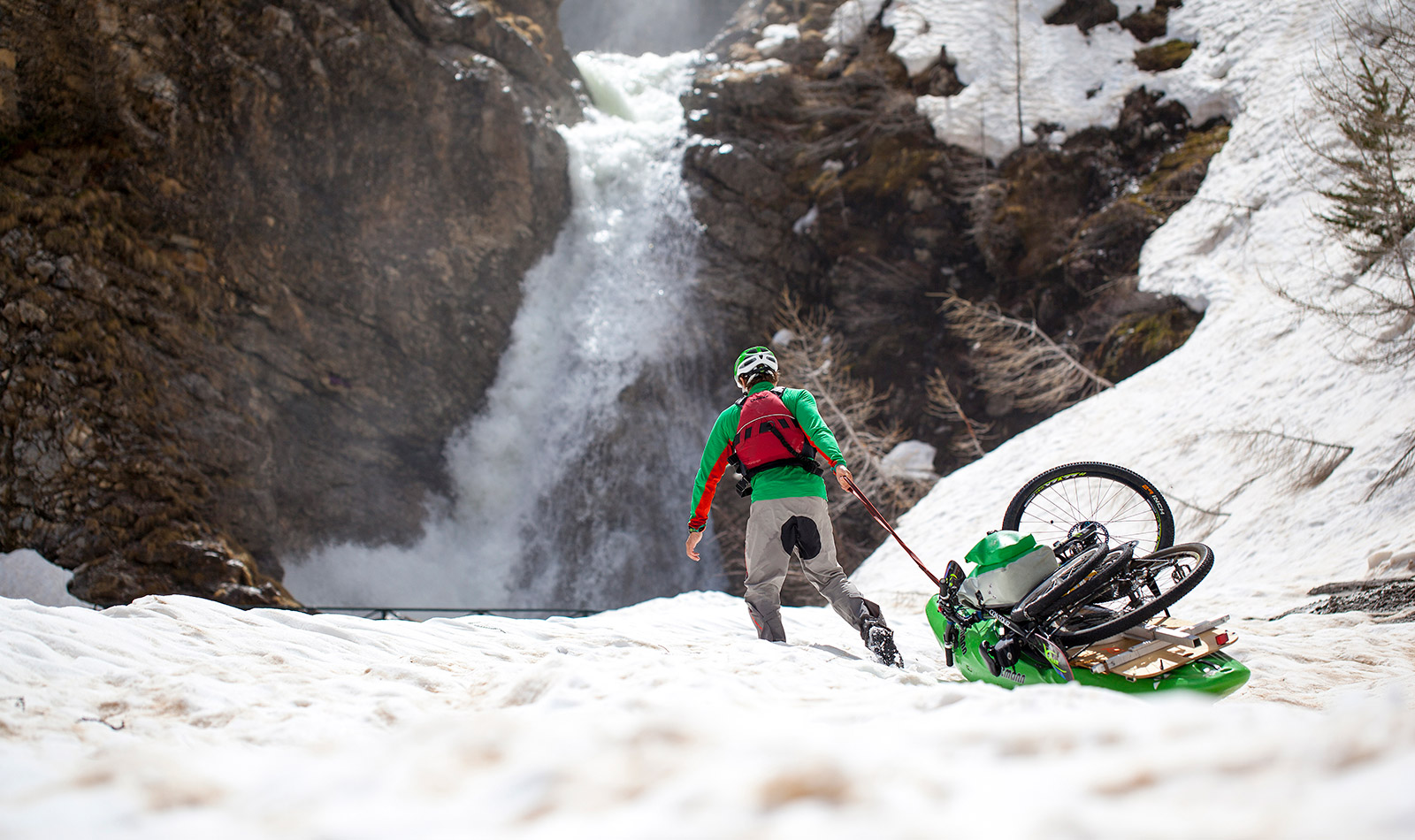 Five countries, 2,000 kilometres, 22,000 meters of altitude, 52 days on the bike and in the boat. There are not many ways to travel the Alps more intense than by bicycle and kayak. Stop where you want, sleep where you fall over and paddle as much as you can.

The first time I think about giving up is at the Col de la Cayolle, in the French Maritime Alps. I am stuck in the snow, hip-deep – one hand trying to push myself out, the other clutching the rope with which I drag my kayak behind me like a pulka. My bike is strapped on top, and every few meters the whole setup begins to totter. But for now nothing is moving – largely because I’m immobile. As I sink again into the powder, I’ve just about had enough. I scream every four-letter word I know, and even create a few new ones.
But it’s no use complaining. For one thing, we somehow have to get over that mountain top and for another, it’s our own fault: the moment we entered the valley of the river Var, huge Col Fermé signs admonished us that the first big mountain pass on our trip would be closed due to a huge snow pack in mid-May. But back then it was 30°C and we were confident that the pass would only be blocked for cars – if at all.

After paddling through the Gorges du Daluis we have to make a decision. Should we turn around and take a detour of several days, or should we take on the challenge? We are no cowards, so the answer is clear to us.

So we find ourselves pedalling up the narrow road in the lowest gear possible, pulling the fifty-plus kilos of equipment behind us on a trailer. And the higher we get, the more we doubt our plan. At first the valley dwellers are cheering us with shouts of Allez! Allez! but eventually they just look-on disbelievingly and the shouts change to C’est impossible! La neige! ‘So what about the snow,’ I mutter. I’m betting it’s been ages since they were up there themselves and everything will be fine.

At 2,000 meters it begins to rain. Shortly afterwards, the drops merge into snow. Then the road ends. This is not just avalanche debris – what faces us looks like the perfect freeride resort. But as I don’t have my skis with me, I would look pretty stupid. It will be dark in about an hour and turning back is not an option, not least because of our pride. Fortunately there is a small shelter in the basin. After trying, and failing, to push our bikes through the snow, we decide to use our kayaks as a sledge with trailer and bike on top. Once we’re sitting in our little hideaway, with our wet kit drying by the fire, the whole mission seems pretty cool again. Haven’t we been asking for adventure?

The next morning the alarm goes off at 5:30am. One glance out the window is enough and I just want to crawl back into my sleeping bag – heavy fog has painted the world a drab grey. Only the snow poles marking the road give us a hint where we should be heading to get down to the valley.

After trying, and failing, to push our bikes through the snow, we decide to use our kayaks as a sledge with trailer and bike on top. Once we’re sitting in our little hideaway, with our wet kit drying by the fire, the whole mission seems pretty cool again. Haven’t we been asking for adventure? 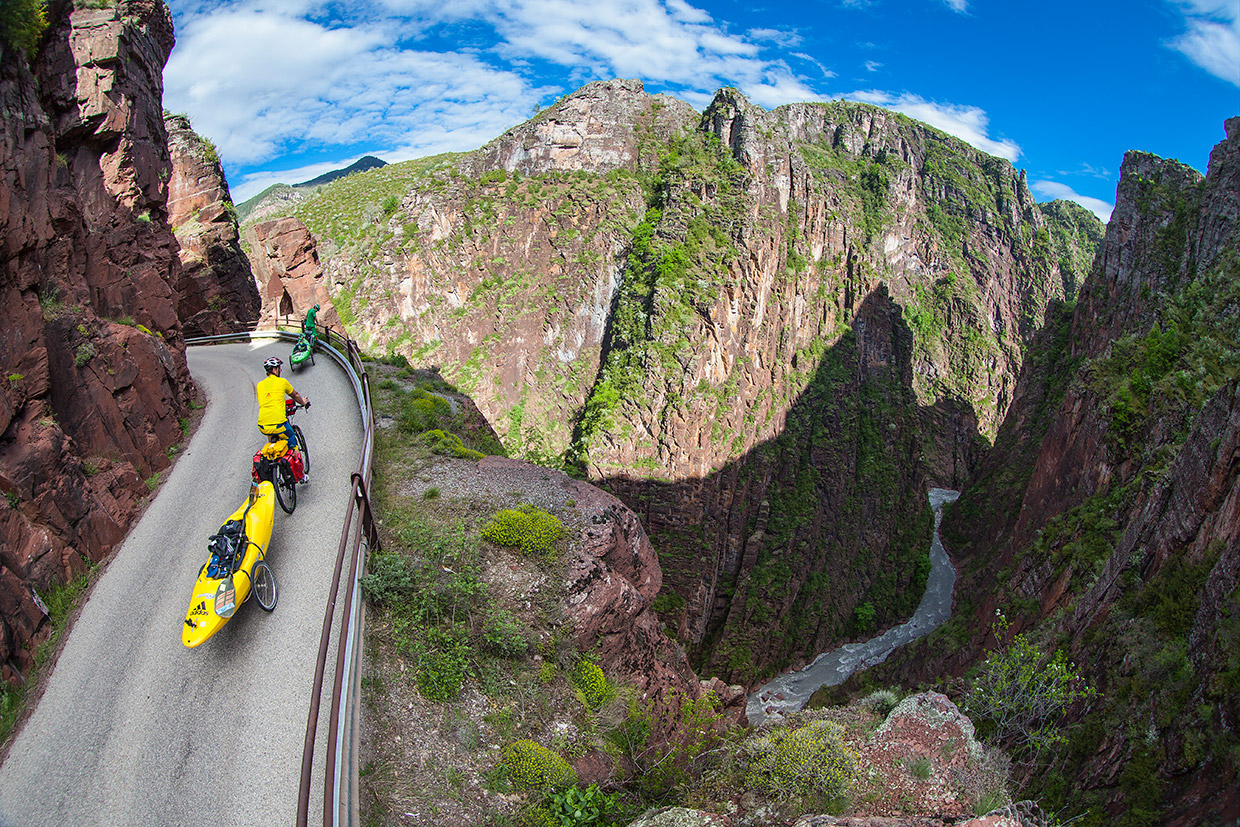 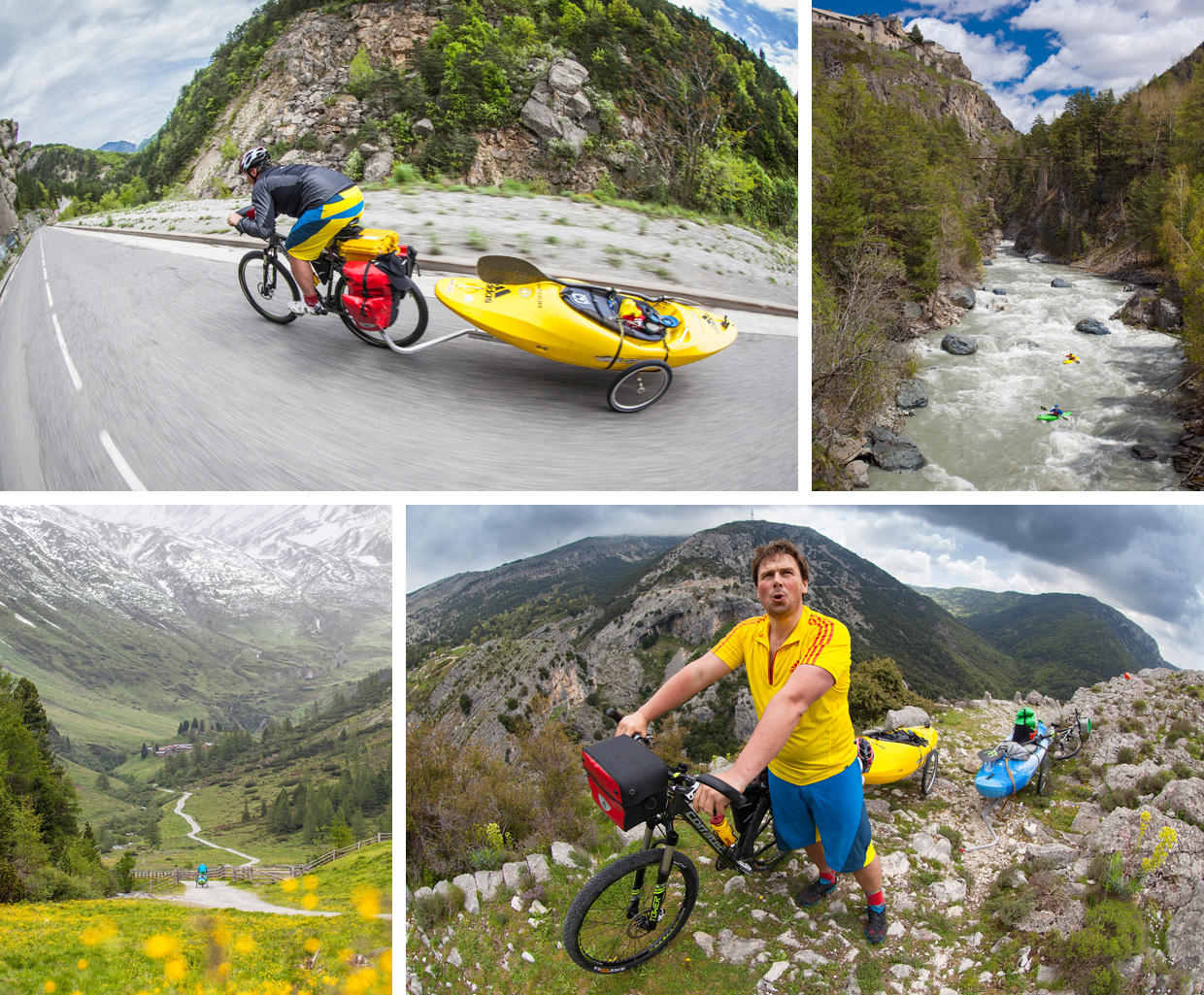 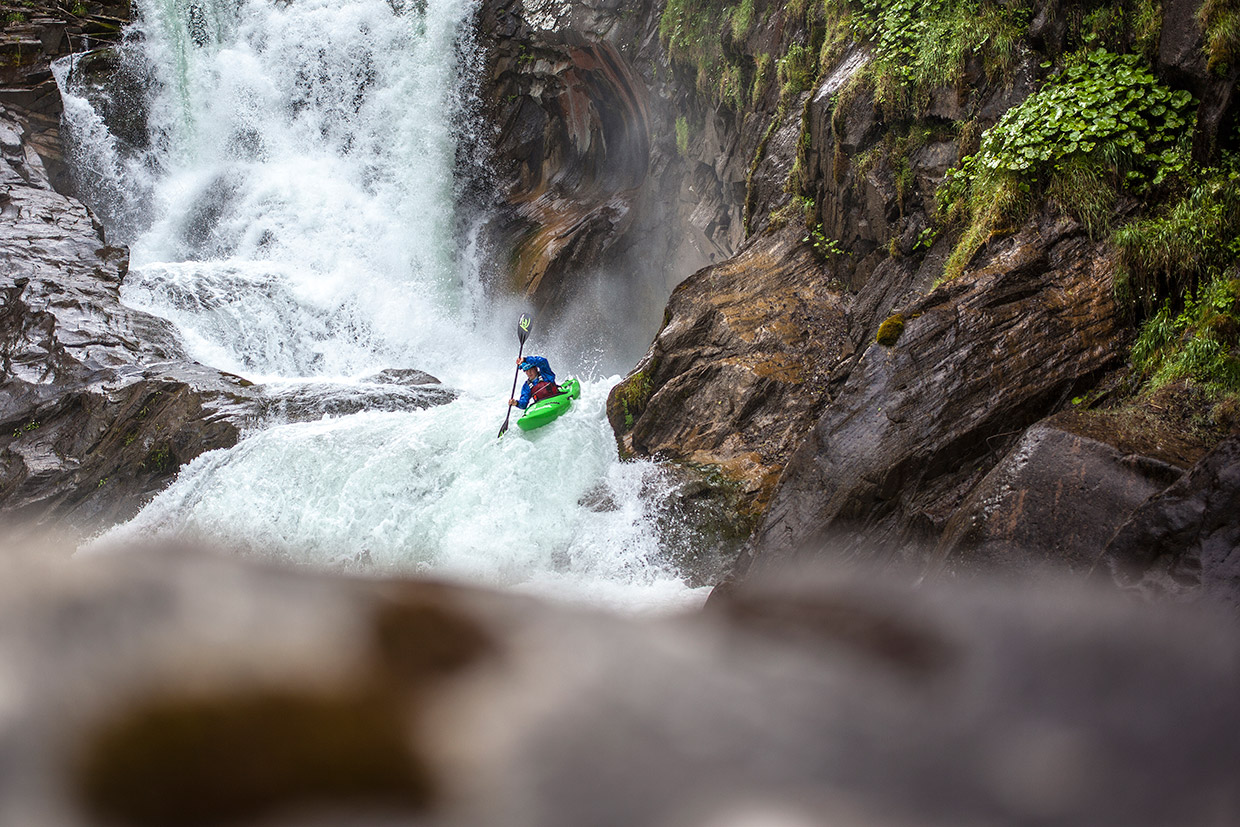 Olaf has discovered another way to ease the effort of pedalling – he simply tosses all of his gear. The first time, it is his rain jacket; then a t-shirt, followed by his sun glasses, a single sock or the back-up stove. It’s a very special way of traveling light. Olaf’s explanation is simple: “Too many possessions handicap a free mind.”

A few days later all that struggle is forgotten and replaced by countless new impressions. Although it’s been only a week since our start in Cannes at the Côte d’Azur, it feels like we have been on the road for an age. There is nothing between us and nature, and with our bike/trailer combination we attract considerable attention. When the biking is particularly hard, there are always cycling-mad Frenchmen to cheer us from the side of the road. And Olaf has discovered another way to ease the effort of pedalling – he simply tosses all of his gear. The first time, it is his rain jacket; then a t-shirt, followed by his sun glasses, a single sock or the back-up stove. It’s a very special way of traveling light. Olaf’s explanation is simple: “Too many possessions handicap a free mind.”

His comment captures the spirit of our endeavour. Our journey is set to take two months, with everything we need packed in our kayaks and the cycle panniers. Back home, we have all been living life at a breakneck pace – we have mobile phones, 24/7 e-mail access, Skype and in between we post our latest gossip on Facebook. Fall away from this social-media rat-race and you are soon labeled as an outsider and, worse, you begin to feel like one. So, right now, we feel privileged to have pulled the plug and rid ourselves of all that stress. Our bikes may be slow, but here we can live in the moment, and experience the right-here-right-now life we’ve been looking for.

With this mindset we cruise from day to day through the endless variety of the European Alps. When we feel like kayaking, we head to the next river and play in the pristine waters. But instead of chasing the biggest waterfalls and hardest rapids around the globe, this time it’s about the journey itself: the scenery, the people, and about discovering simplicity. The route leads us from France over to Italy. Then Switzerland and Austria; back to Italy, back to Austria; then from there to Slovenia, and finally to back to the sea in Venice. 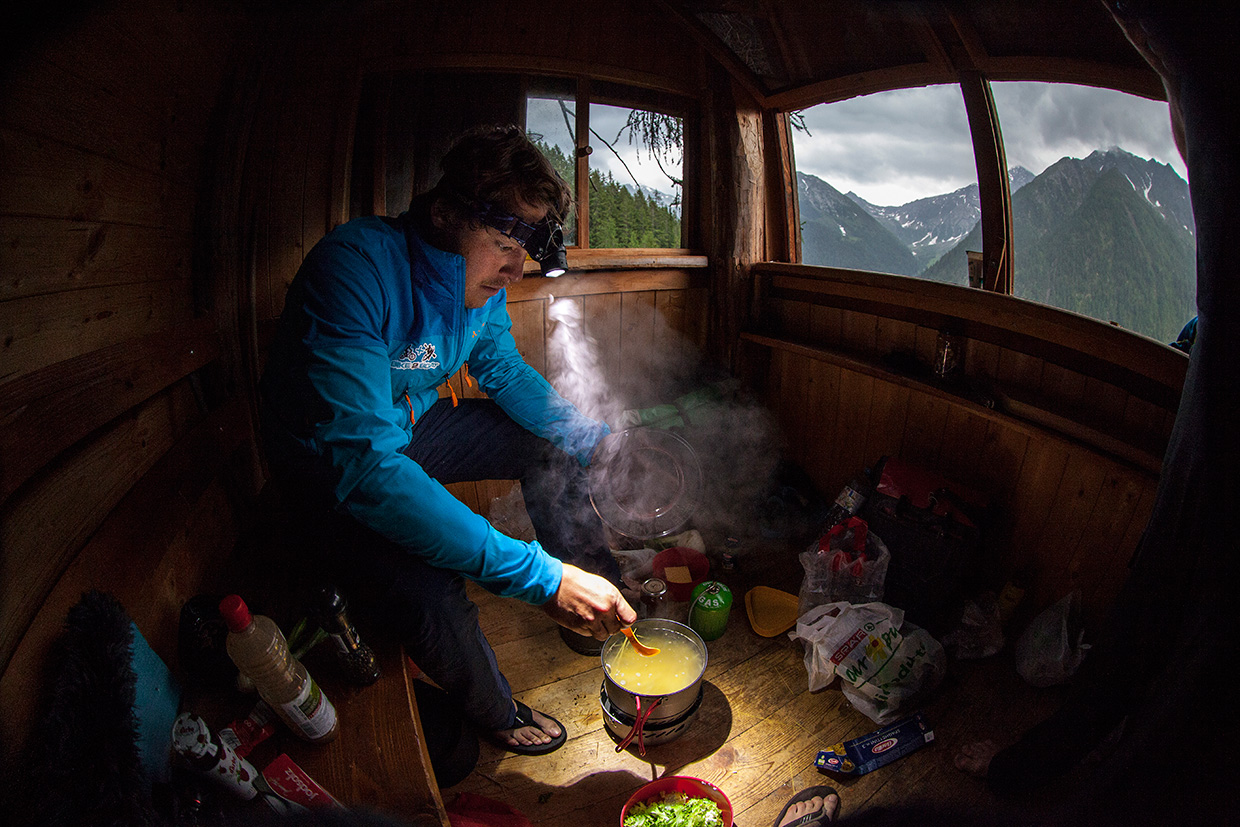 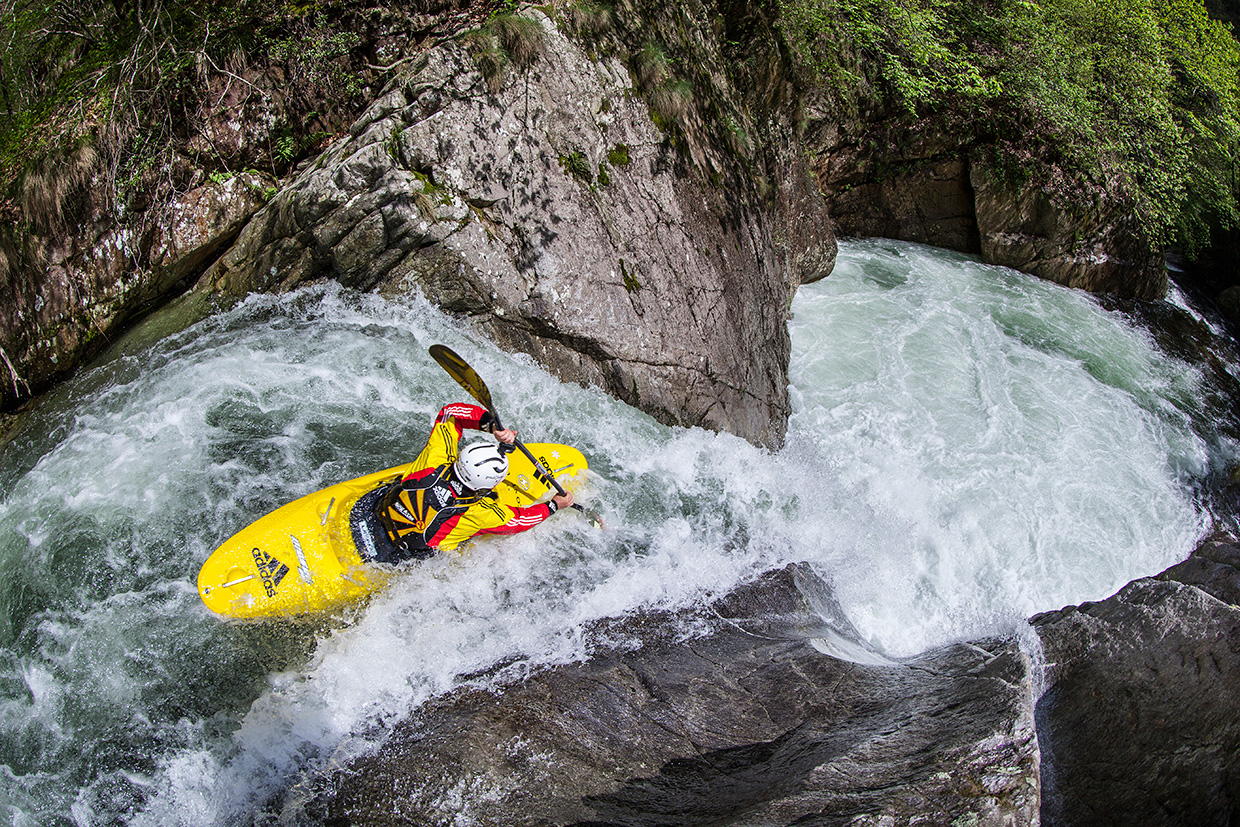 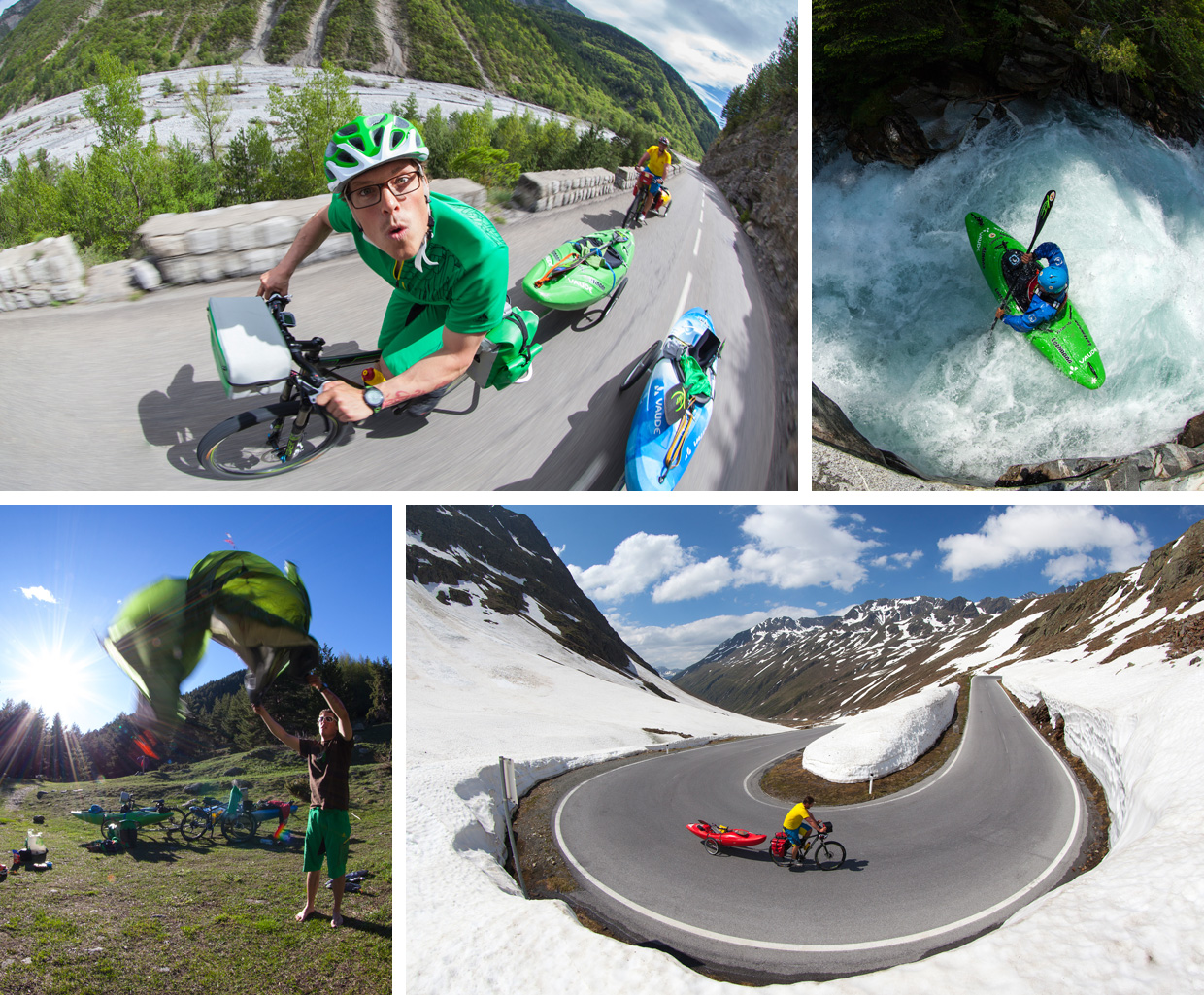 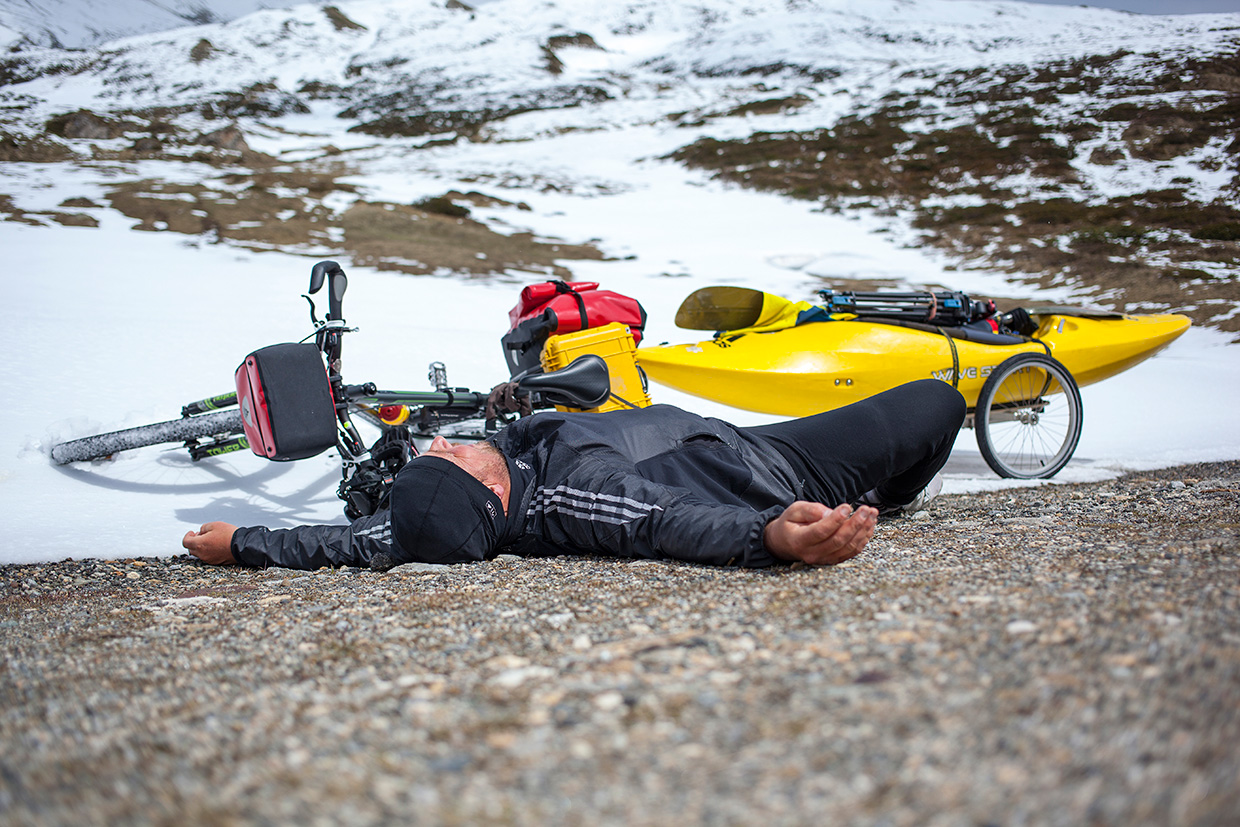 But we cannot stay on the road forever. On the way to Slovenia we realise that this great adventure will soon be over. One last time we use our kayaks for what they made for, because after that, only the placid channels of Venice await us. Suddenly, we enjoy paddling in the crystal clear water of the Soča all the more.

After that we make our way to the final stage in Venice, with full memory cards and unforgettable experiences. Before plunging into the hurly-burly of the big city we want to spend one more relaxed night at the sea. But as we get to the city of Cáorle we are shocked: the hotels are as ugly as the temperaments of the people densely packed at the beach. But the real kicker is our Czech camping neighbour – with the engine running, he is sitting in his car, drinking canned beer. We ask politely if he would mind silencing his vehicle, but he just answers: “Sorry, but then the air conditioning is not working.” Happy holidays, my friend!
As we reach Venice, we are really relieved to jump back into our boats. The white water kayaks are perfect for seeing the city by water. On the Canal Grande, and numerous other channels, we soak in the beauty of this historical place. Only the waiter at St. Mark’s Square hauls us back to reality – by charging eleven euros for a small beer.

And then suddenly it’s over. We’re standing at the train station in Mestre waiting for the night train to Munich. During the ride in the crowded carriage, I wish myself back into the kayak. How much cooler it would be to inhale pure, clean alpine air, rather then the perspiration of the man sitting next to me. But only a few hours later, I am back in the lazy mode. Instead of biking the 60 kilometers back home to my hometown Augsburg, I take another train. Welcome back to reality.

Olaf Obsommer:
Olaf is and award-winning film maker and producer and a living legend in whitewater kayaking. His first movie like “Boof Chicken Boof” to his latest production “In search of the River God II” was a long journey. Olaf now executes large TV-projects for adidas outdoor and major German TV shows as SternTV and Aktuelles Sportstudios.
www.big-o-productions.com

Jens Klatt:
Over the years, Jens has gained a reputation as one of the best outdoor-photographers in the business. His works have been published in numerous magazines and newspapers such as outdoor, Geo Saison, Men’s Health and 4-Seasons. Jens now works for adidas, Globetrotter, Ötztal Tourism and industry partners such as TK Hockey or Aqualung. With a creative mind, Jens not only shoots extraordinary pictures but also works as a graphic designer.
www.jensklatt.com

Philip Baues:
Philip is a freelance journalist who writes primarily for German speaking outdoor magazines such as 4-Seasons, KANUmagazin, adidas magalog, Abenteuer Reisen and more. He also created ahoimag – a core magazine for the whitewater paddling scene. Philip still loves to kayak and travels the globe in search of adventures and new rivers.

Journey to the Furnace Volume One