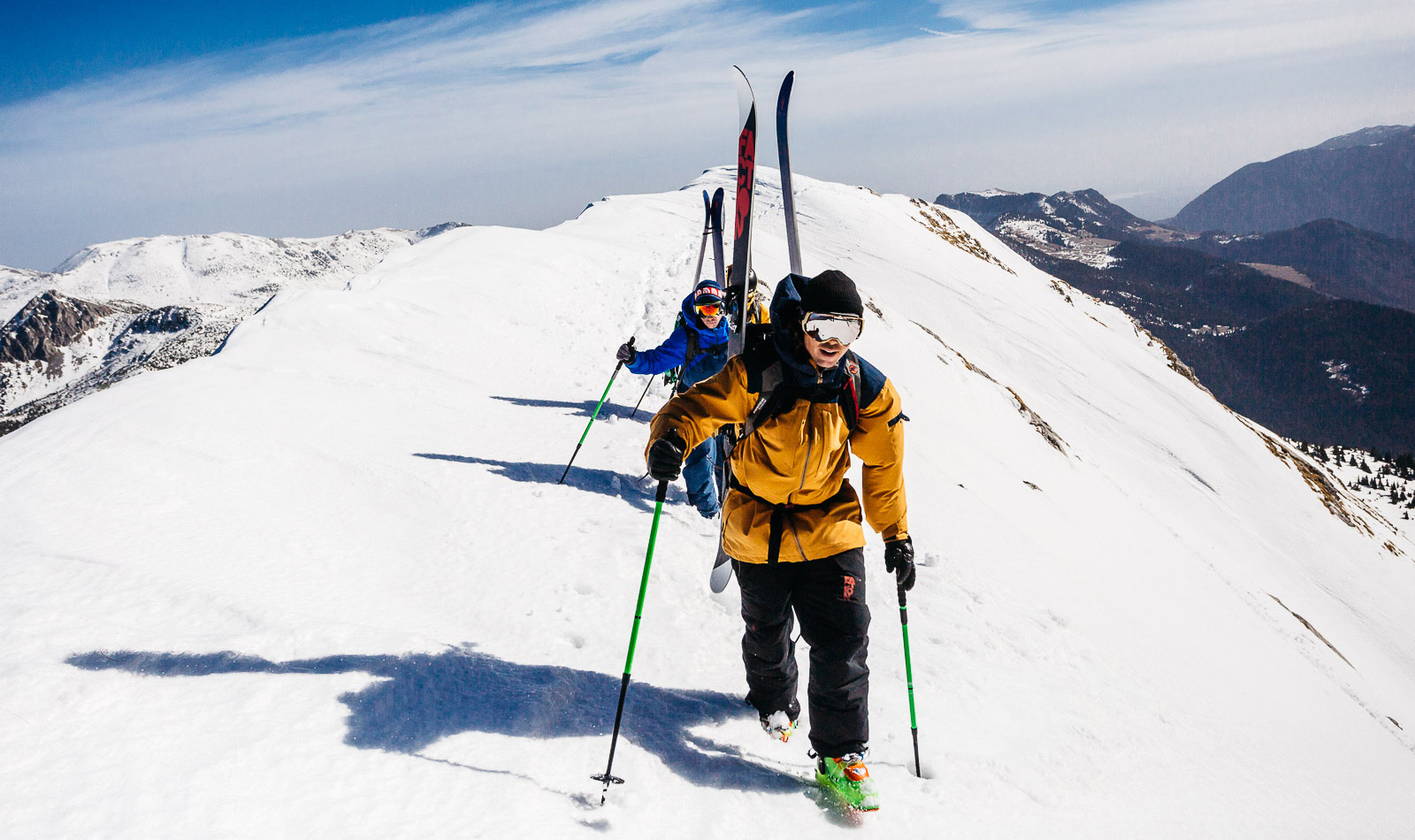 Breaking Boundaries in the Balkans

Our objective is to supply equipment and provide training on skiing and avalanche hazards, promoting the development of cross-country skiing in these mountains. It’s an area with much potential.

Hajla, a mountain 2,403m high, stands on the border between Peja in Kosovo and Rozaje in Montenegro. On one side the rakija (brandy) is toasted with a cry of ‘Ziveli!’; on the other, ‘Gëzuar!’.

30 years ago, people in these towns lived under the same republic, Yugoslavia, whose implosion in the late 1980s heralded two troubled decades throughout the region. When the border was open, shepherds and mountain villages above Peja were able to trade directly with Rozaje, and Hajla was more accessible. But conflict raged in 1999 between Kosovo and the forces of the Serbian army. In 2006 Montenegro achieved independence from Serbia; Kosovo proclaimed her independence two years later.

It is this disputed ground that hosts our mission, ‘Hajla 2016’, working with the Gear4Guides association founded by Olaf Sueters. Our objective is to supply equipment and provide training on skiing and avalanche hazards, promoting the development of cross-country skiing in these mountains. It’s an area with much potential.

Our team includes Arnaud Rougier, 34, who made his debut at the French Freestyle in 2000, and Swiss guide Samuel Anthamatten, 29, known for his performances on the Freeride World Tour. Skier-director Etienne Merel, 27, is in charge of the adventure filmmaking while I take care of words and pictures for our 12 days of travel. Also accompanying us is Todd Walters, an American in his 30s who travels the world to create transborder national parks between countries marked by conflict. And then there’s Peter Crosby, a young employee of Avatech, a Vermont-based startup making mobile connected probes to test the quality of the snow.

We start in Geneva on February 12th, 2016, aiming to return on the 24th. It’s raining at the airport, but we’re confident – our contacts confirm 50cm of fresh snow on the mountain the week before our arrival. We choose to approach from the Kosovo side for easier access. We land, our passports are stamped – no visa required for short stays in Kosovo – and we meet our guide, Fatos Lajçi, founder of the Environmentally Responsible Action (ERA) Group. Then we get ready for the one-hour drive to Peja. 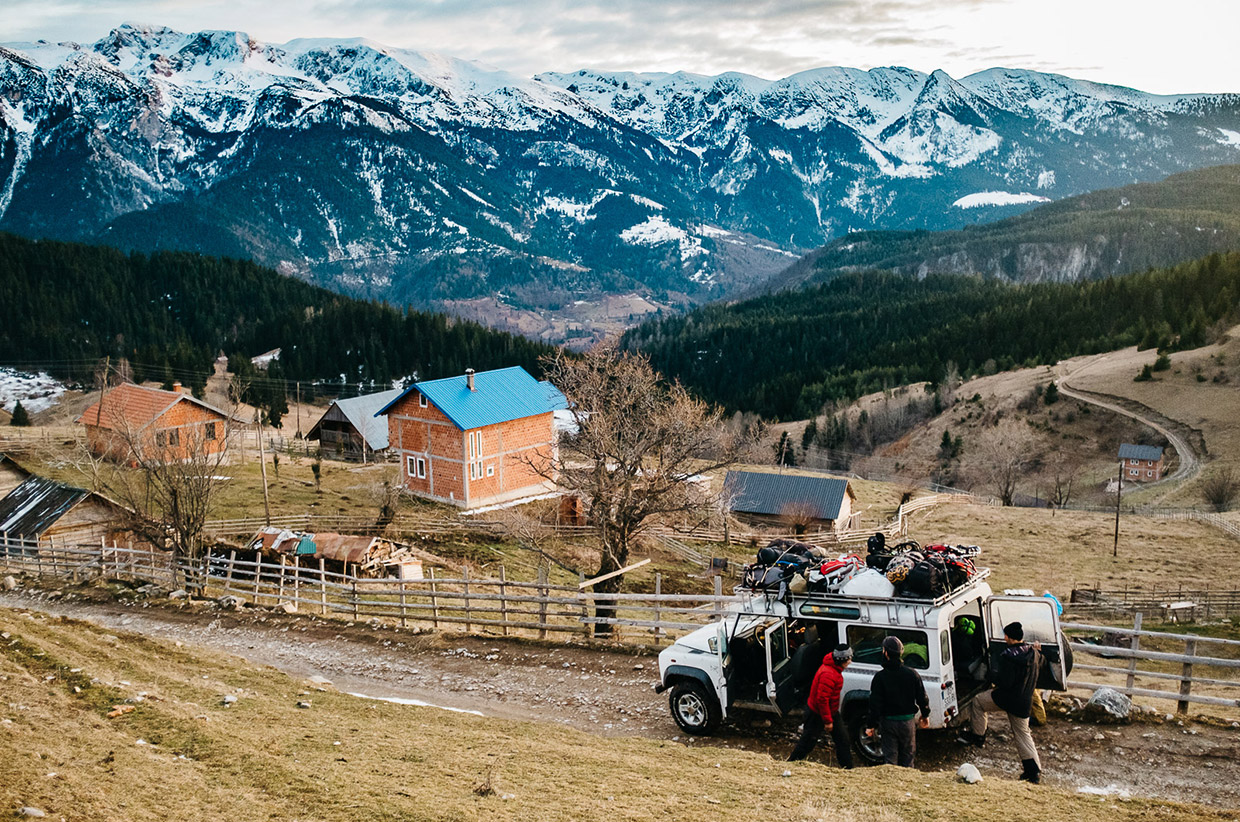 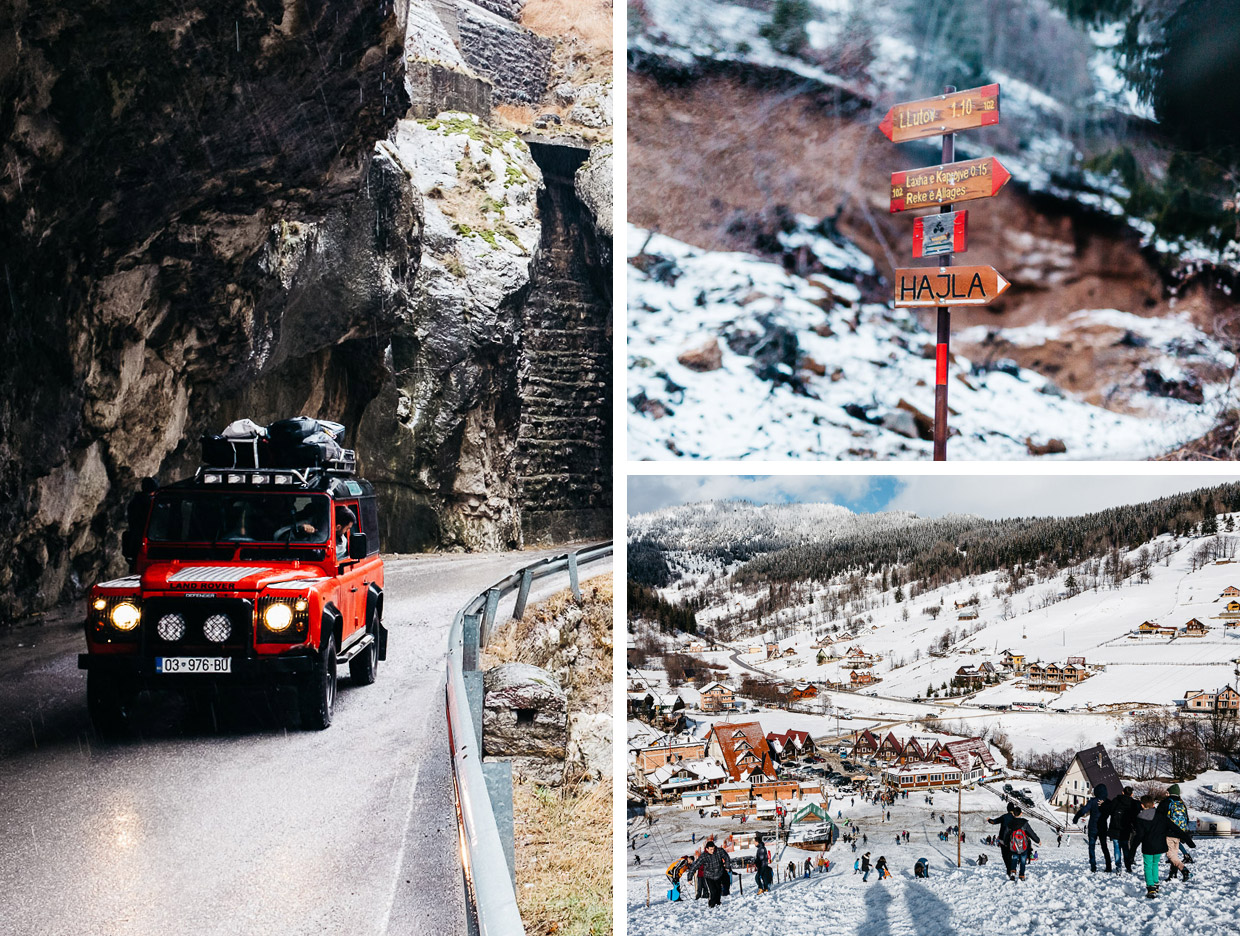 Peja is Kosovo’s second city; 100,000 people cram into this ancient mountainside centre of commerce and industry. We feel the influence of the Ottoman Empire which dominated the region for almost five centuries, leaving signs everywhere in the food, music, and ancient mosques.

When we visit the tourist office, we’re disappointed to find a few scant brochures about activities in the area: just two independent guides, and a handful of summer hikes to local waterfalls or viewpoints. Afterwards, we visit the mayor and learn of his project for the region. ‘I wish to bring European investors to create fifteen ski lifts on Hajla. Plans are ready. We can couple this with a spa centre.’ But this is not to the liking of Fatos and his ERA association, founded in 2003 to transform Hajla into a protected area whose wealth comes from the sustainable management of forests, local crafts, the development of guest accommodation and a census of the local wildlife. They aim to protect this precious environment before it is exploited and degraded.

Fatos explains his mission. ’Look at this picture – a Balkan lynx we have just, for the first time, captured with our automatic camera.’ Proof of the lynx’s existence is a major asset for the ERA to help them enhance and protect the national park that the government finally made official in 2012. But Kosovo remains a young country, and corruption is rife. ‘You have to constantly fight,’ Fatos sighs.

Our team drives to the hamlet of Rekë e Allagës below Hajla, where Mustaf and his wife Fetije welcome us to their eco-friendly cottage. They established their business two years ago with the help of Todd Walters and the ERA, aiming to provide accommodation for tourists, and today offer ten beds in two bedrooms. We are the first to visit this season. Fetije serves us hearty meals made from local produce while her husband scouts out our route onwards.

Late the next morning, we depart for the ERA refuge. ’These are ancient shepherds’ huts, destroyed by Serb forces during the war of ’99. We fought in these mountains,’ Fatos says, breathing heavily from the three-hour climb to Hajla cabin. Fatos was born in these mountains and is intimately linked to them. His parents lived here, and he has lost a younger brother, killed in the war. In 2009, Fatos and the ERA began building a new cabin at 2,000m in an open clearing on Hajla, surrounded by fir trees. In summer it receives ERA camps and schoolchildren from Peja who come to discover nature. Now it is to be our base.

Fatos is assisted by Rudi, former soldier of the Kosovo Libertarian Army, as well as the young cousins Bardh and Parsim Sanaja, 23 and 20 years of age. They get busy arranging rations, and diesel for the generator, which is able to provide two hours of light per day. Our hosts prepare local specialities: burek, vegetable soup, marinated peppers, beef sauerkraut. A large stove warms the large living space and rooms above, but this doesn’t stop Sam preferring to sleep on the balcony under the stars.

For two days, rain prevents the ascent of Hajla, and the snow dwindles before our eyes. We start to wonder if the thick blanket of snow we’d been promised will ever appear. But Arnaud and Sam still take the opportunity to instruct Bardh and Parsim – this is the first time they’ve skied, and at the end of the day, barely containing their excitement, they manage to make their first turns under the watchful eye of Fatos. He recalls: ‘I was like them at 14, when I wanted to ski. My village was 500m below, so no-one skied there, and I thought I’d build my own skis. I found a special tree with the right shape and borrowed my neighbour’s horse to bring it back. I cut it in half and dried it for two weeks, then sharpened and buffed it, painted it. All the children of my village were jealous. I liked skiing through the forests – like flying. It was extraordinary.’

Arnaud and Sam take the opportunity to instruct Bardh and Parsim – this is the first time they’ve skied, and at the end of the day, barely containing their excitement, they manage to make their first turns under the watchful eye of Fatos. 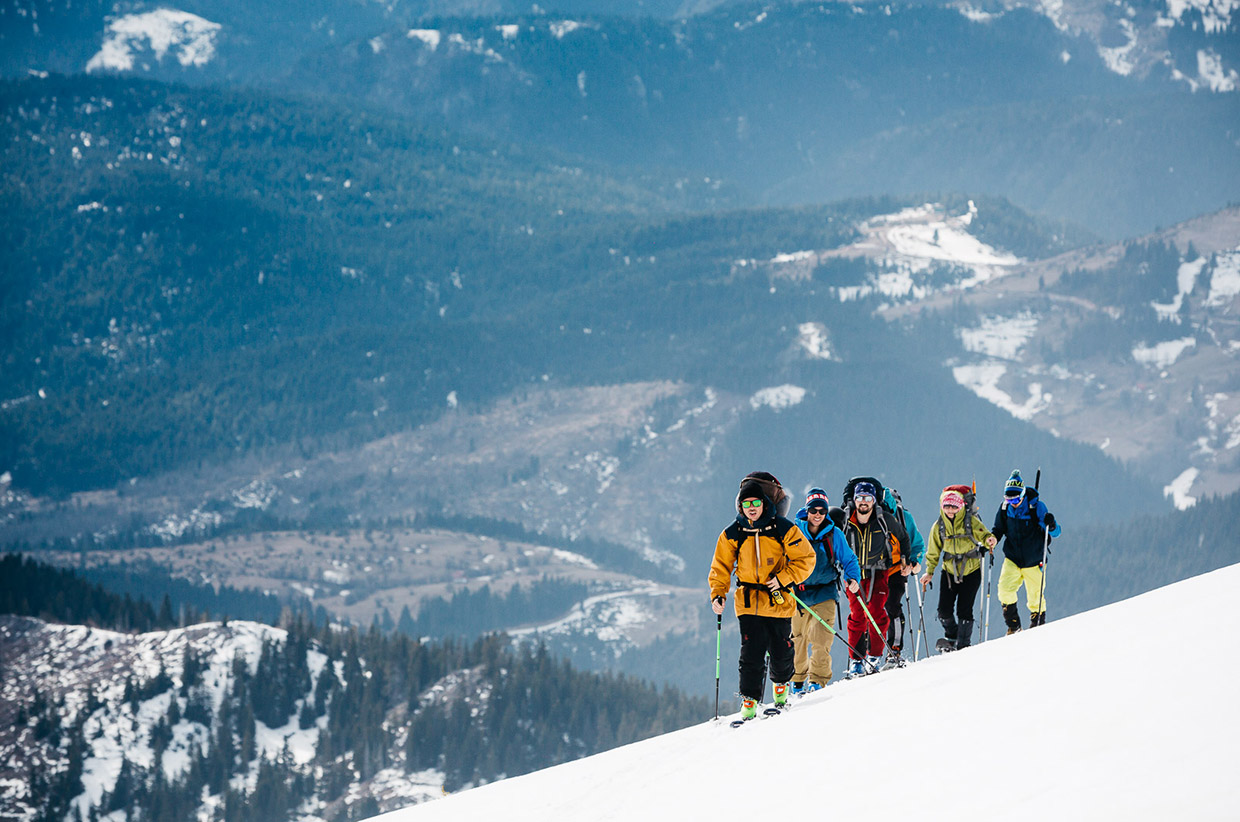 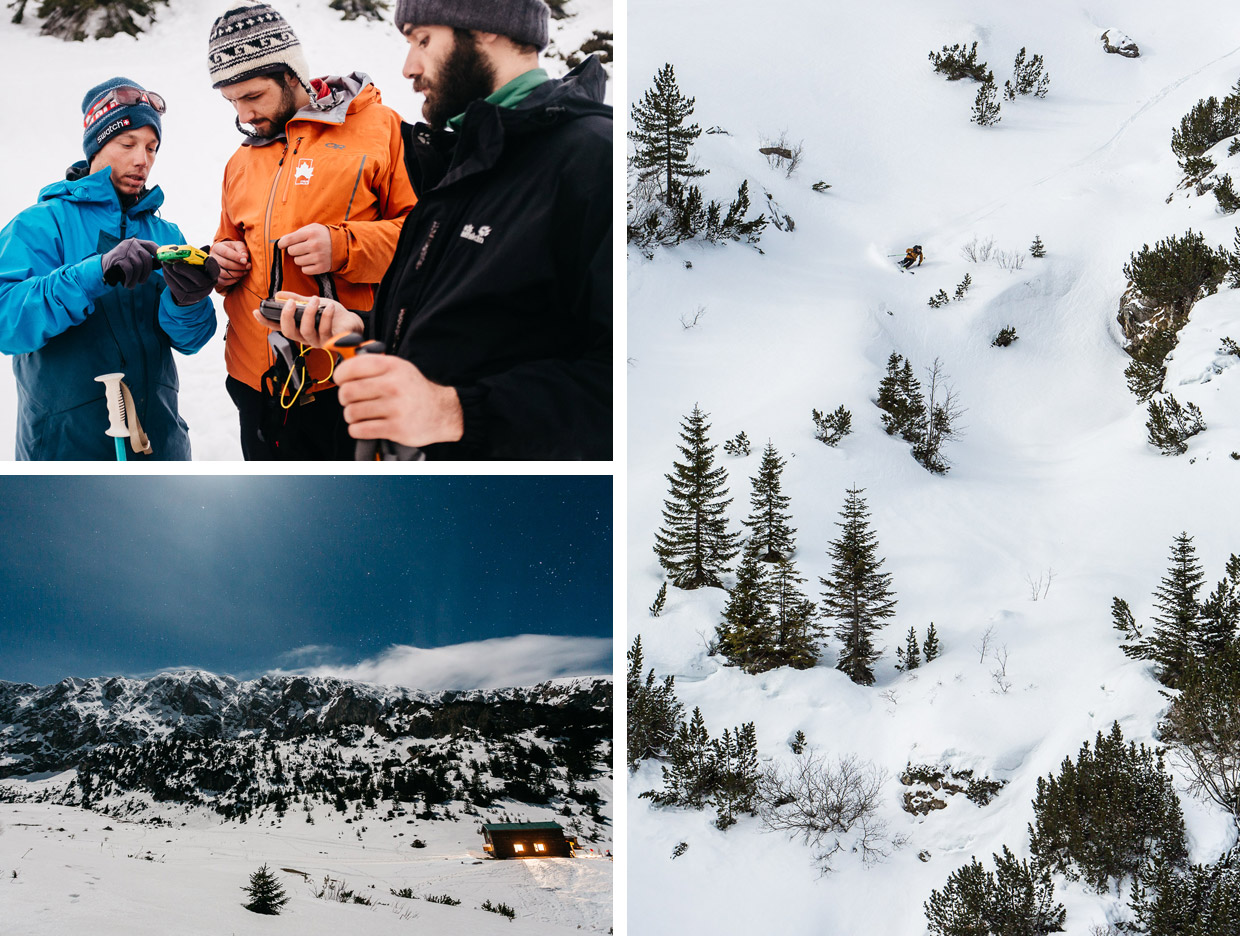 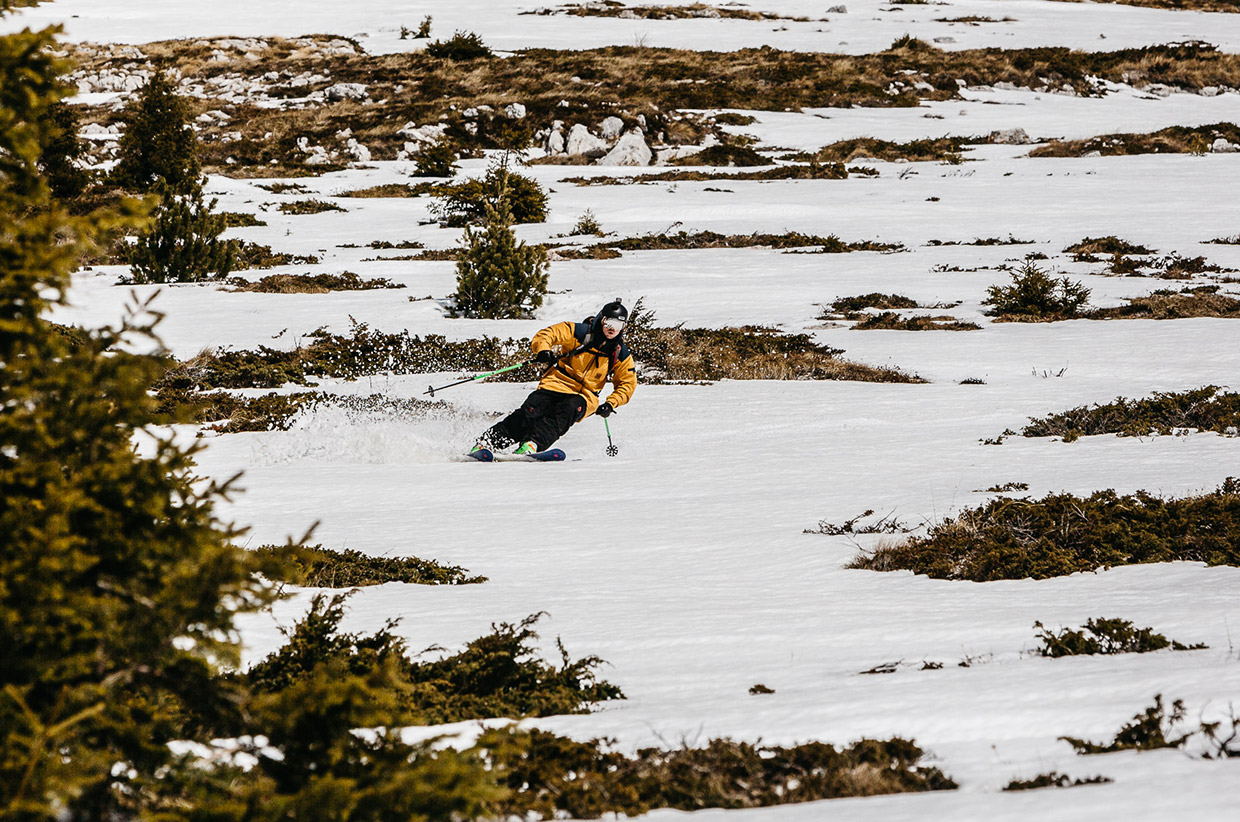 The ERA has two pairs of shoes, skis and skins, and avalanche transceivers. Sam is a good guide; we all spend hours studying the analysis of snow and avalanche research. For Bardh and Parsim, skiing allows faster trips and facilitates park preservation work, helping them monitor the lynx.

The rain finally stops, the sky is blue, and the wind drops. We make the 500m climb from the south side in just under 1hr 30, and from the top we look down the massive north face, almost 1,000m high, into Montenegro where we’ll go the next day. But this is a dangerous mountain ridge and we’re wary of the drop.

Four days after our arrival in Kosovo, we make the ascent of Hajla. The rain finally stops, the sky is blue, and the wind drops. We make the 500m climb from the south side in just under 1hr 30, and from the top we look down the massive north face, almost 1,000m high, into Montenegro where we’ll go the next day. But this is a dangerous mountain ridge and we’re wary of the drop.

Our skins removed, Arnaud and Sam trace the first lines on this face, not too technical for any good skier. But the rain has caused a lot of damage. Arnaud isn’t demotivated – he goes back a second time that day for more, a valuable opportunity given the few lines still ridable.

On Hajla the borders of Albania, Montenegro and Kosovo meet. There are now three national parks in these countries, grouped under the Balkan Peace Park. Todd explains that they created a ski course that can go from one park to another by jumping borders.

Through binoculars, we see a team approach on snow shoes. Zuko Kurtagic, a 32-year-old Montenegrin guide, is among them, and they come down to stay with us in the ERA cabin for the night. The reunion between Zuko and Fatos is a happy one; they know each other well despite the differences in language.

The next day we pass the border by jumping from an icy ledge at 2,000m on the eastern flank of Hajla – no customs inspection here! Some of our teammates, more responsible perhaps, take an ancient trade route between Peja and Rozaje below.

After a quick ski descent, we find ourselves in the simple climbing cabin of the Hajla Ski and Mountain Club, situated high above the town of Rozaje. It’s a homely place, crammed with posters extolling the virtues of Montenegrin mountaineers. Upstairs we find two dormitories with room for a good 30 people. It’s almost like being in the Alps.

Skiing culture is more prominent in Montenegro, due to its more peaceful history and more robust economy than Kosovo. Zuko says, ‘Our club has existed for 50 years, and we have 15 active members and volunteers, most of whom are qualified in guiding and first aid. But the main Montenegrin ski stations closed during the breakup of Yugoslavia. Today we wish to develop the backcountry skiing and hiking, despite the lack of equipment in the local stores.’ He goes on to explain that proper equipment must be bought in Slovenia or Austria at a hefty premium – and the impact of the expense is doubly felt given the low average income. The club is trying to increase the number of winter visitors so that they can afford a permanent employee.

‘I was caught in an avalanche last year,’ recalls Sémir Kardovic, one of the club members. ‘There were no aid supplies; luckily I was not buried.’ 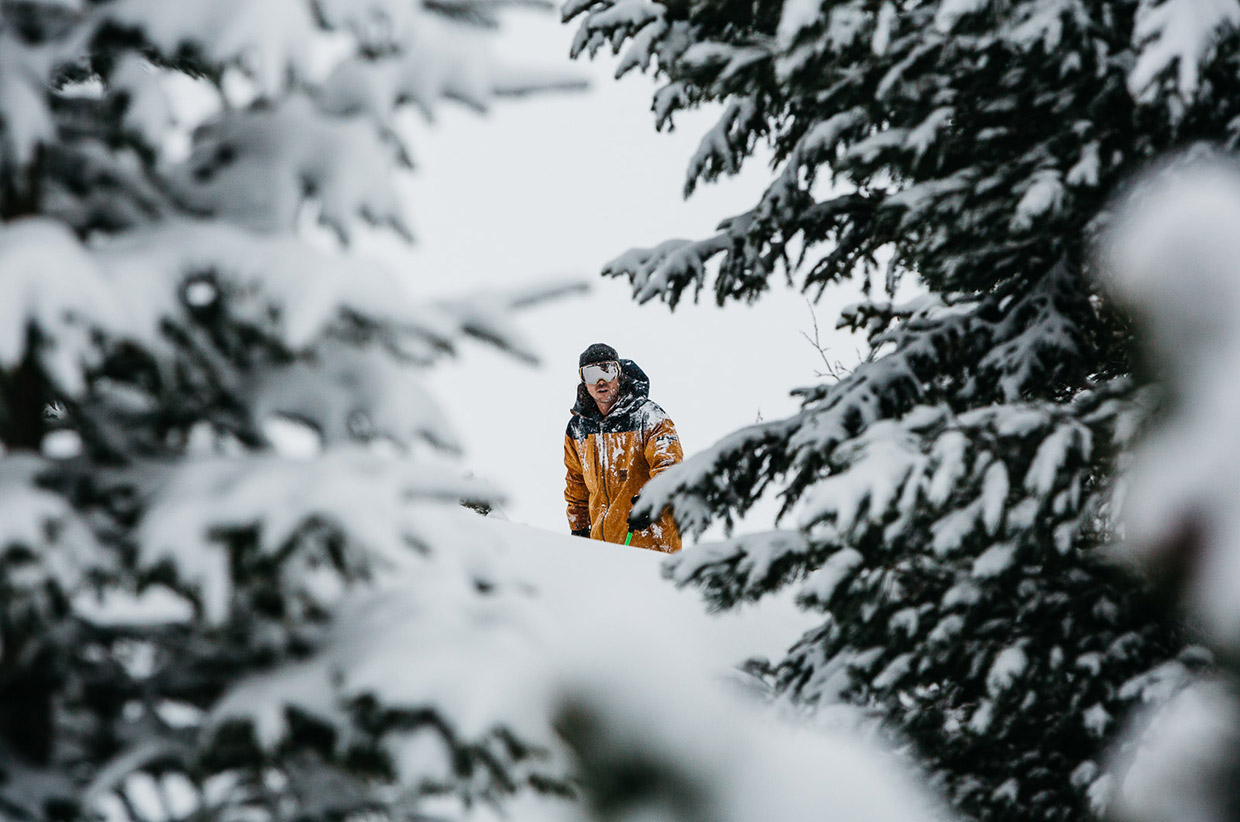 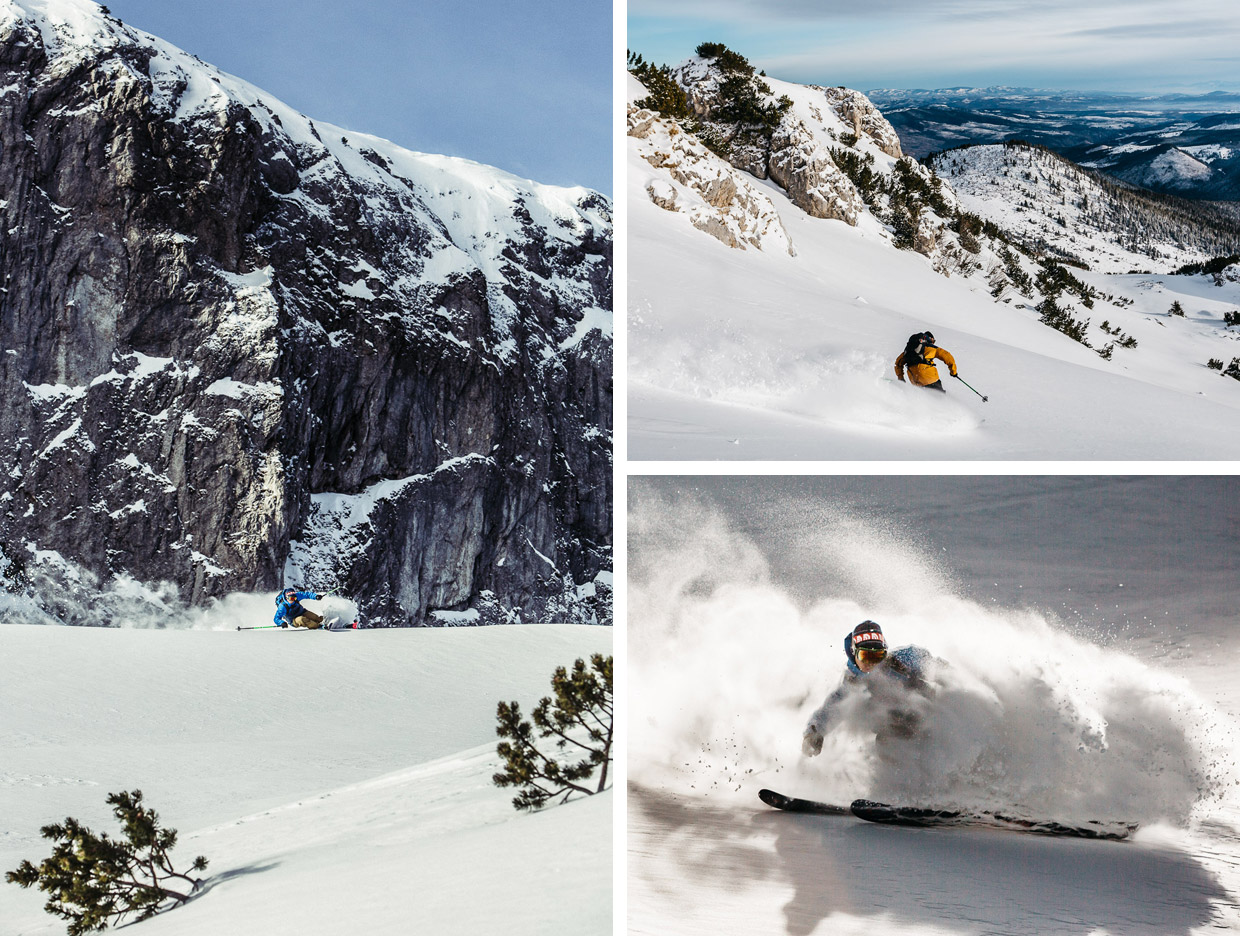 As in Kosovo, rain persists. We take advantage of the lull to practise skiing under Etienne Merel’s expert gaze. With equipment provided by our team, the friends Zuko, Sémir and Armin achieve their first freestyle tricks. We spend two days learning with freestyle rider Arnaud Rougier, culminating in the spectacles of a cork 720, a backflip and a timeless Daffy.

The weather spoils us on the penultimate day of our trip with 25cm of snow on the majestic North Face of Hajla. Finally! It’s a long day – Samuel wakes us at 4.00am so that we can be on the top for 7 to enjoy the first rays of sun across the Balkan mountains. Zuko, Sémir and Armin accompany us, anxious not to miss the show. Arnaud and Samuel make long turns in the powder offered by Hajla’s foothills, and it’s a peaceful experience – only five groups of skiiers have been here so far this winter, mainly from neighbouring countries.

Smiling after this beautiful last day of skiing, we leave our new friends to return to the Montenegrin border. Fatos, Rudi, Bardh and Parsim await us. Exhausted after 10 days of travel and skiing, we descend towards Peja. Sam tells me: ‘The greatest experience of this trip has been to compare our lives with those from other cultures. We realise we are privileged.’

Ultimately, Kosovo and Montenegro are two sides of the same coin: the sense of hospitality and passion for the mountain is shared. The arrival of new winter travellers in this region will benefit business owners, improve local accommodation, develop skills and improve access to equipment, secure jobs, and allow this part of the world to continue its recovery from the shadows of the past few decades. Skiing brings these people together.

Produced in partnership with The Faction Collective 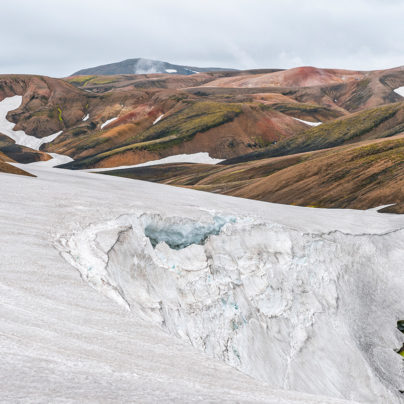 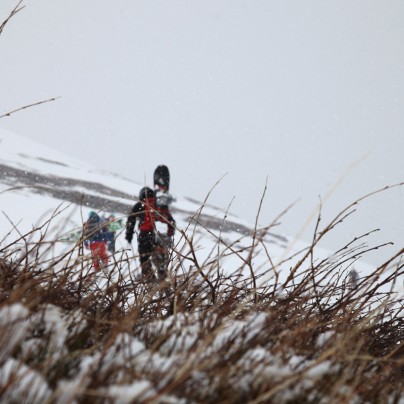