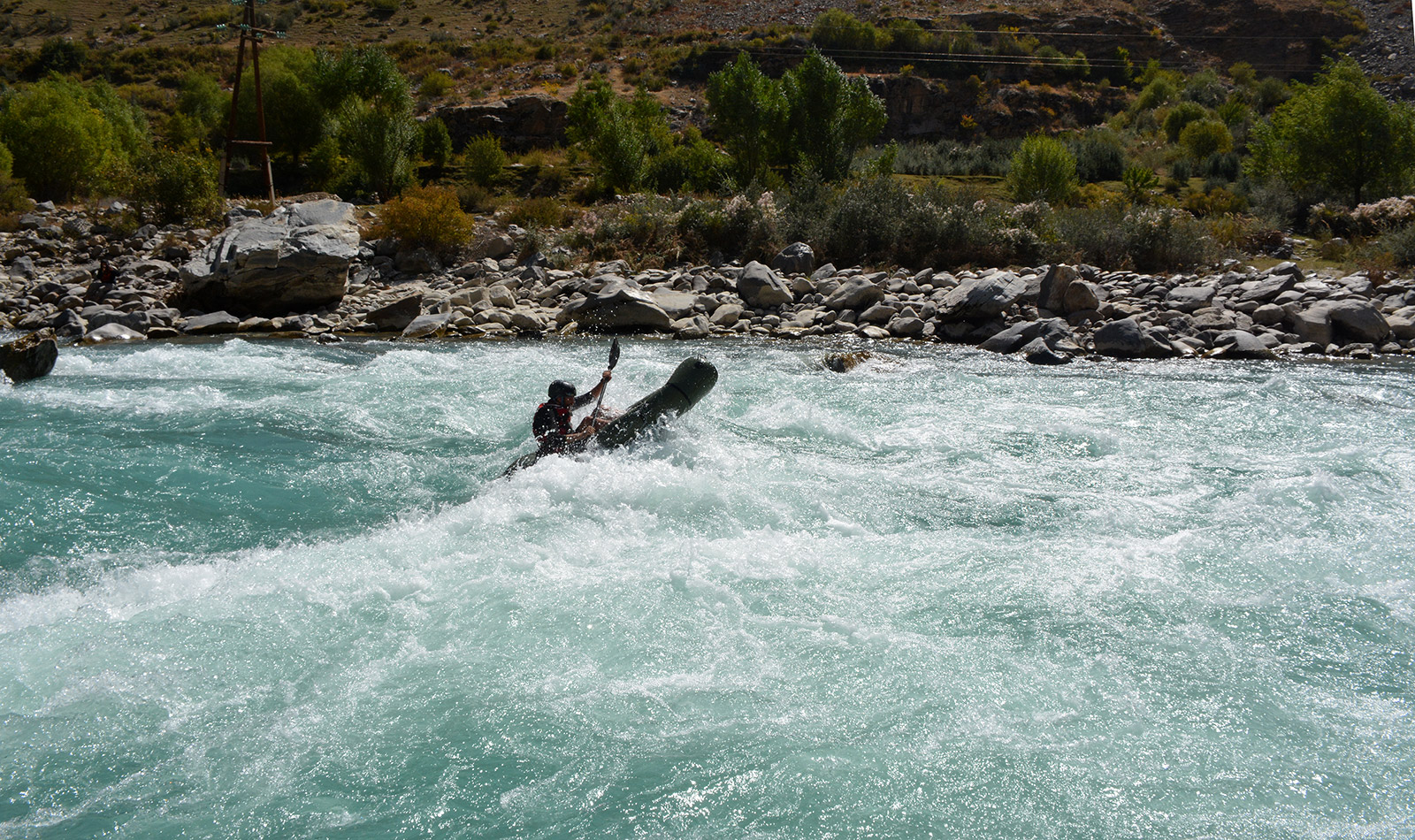 Jonathan Rider and Edmund Le Brun make the first descent of the Oxus River in Afghanistan by packraft. This is their joint account of the adventure.

A smooth stretch of river cuts through low gravel banks under a heavy sky. Silence but for the water and wind. Either side, mountains stretch in a drama of snow-capped peaks and sheer outcrops. Although we have never rafted before, we aim to be the first people to raft from the source of the River Oxus in Afghanistan. How ridiculous that now seems as we nervously lower the rafts into the water for a test run the day before our expedition properly begins.

The moment you’re sitting in a packraft, everything changes. At water level, little ripples become waves that rock you violently from side to side; the wind increases, whipping water and dust into your eyes; the smooth current suddenly feels like it’s pulling you towards certain death. You can’t see what’s coming around the corner. Your swimming trunks seem woefully inadequate protection from the elements, your buoyancy aid disconcertingly small.

In a moment of clarity, we finally realise just what we are undertaking, and for the first time start to question whether this will be possible at all. We push off from the bank. Too late to turn back now.

With something resembling a grin, Edmund says, ‘Just remember to look where you want to go. Don’t look at the dangerous bits or you’ll head straight into them.’ An hour or so of YouTube research and a dog-eared Packrafting for Beginners book qualified him as the packrafting expert.

The rafts are smaller than we imagined they would be. We’re both over 6ft 6, and although we each have our own raft, there is only enough space for a single change of clothing, some food and our cameras. The rest has to be packed on yaks. As soon as I drop into the seat, I’m swept downstream after Edmund who is already bouncing between the riverbanks another 50m ahead. I shout for him to slow down, but he can’t hear me. Even if he could, there’s little he can do other than run himself aground and wait.

We learn more in the next ten minutes than in all the months of preparation leading up to this point. Why did we choose packrafts without spray decks? Why didn’t we think of bringing drysuits? Why did we ever think this was a good idea at all? I cut the water with deep strokes to catch up with Edmund. The speed is exhilarating, but neither of us is in control. With a superhuman effort, we make it to a shallow sand bar and drag ourselves ashore. I try to laugh but my face is numb from the wind chill. Edmund returns my look with an expression somewhere between excitement and extreme worry. Tomorrow the journey really begins as we turn away from gravelled roads and head into the high Pamir Mountains towards the source of the Oxus.

At water level, little ripples become waves that rock you violently from side to side; the wind increases, whipping water and dust into your eyes; the smooth current suddenly feels like it’s pulling you towards certain death. 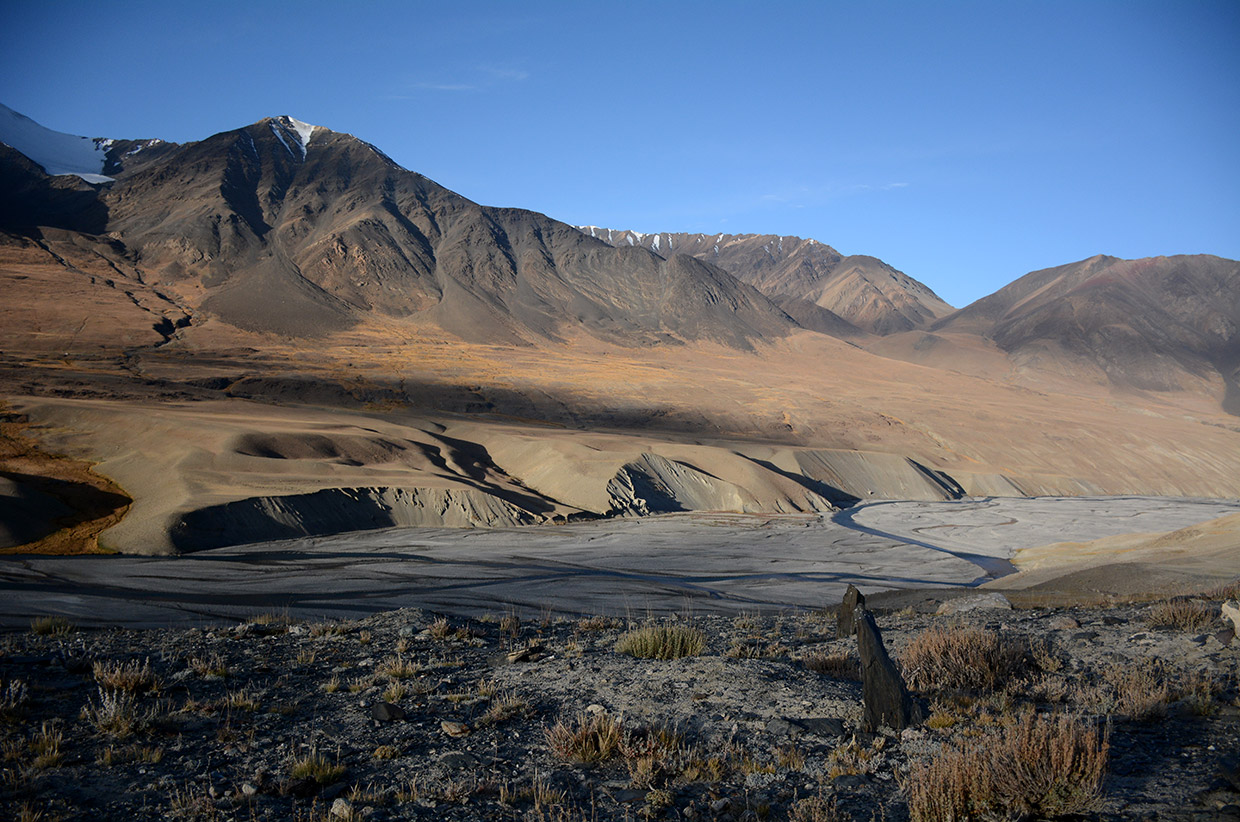 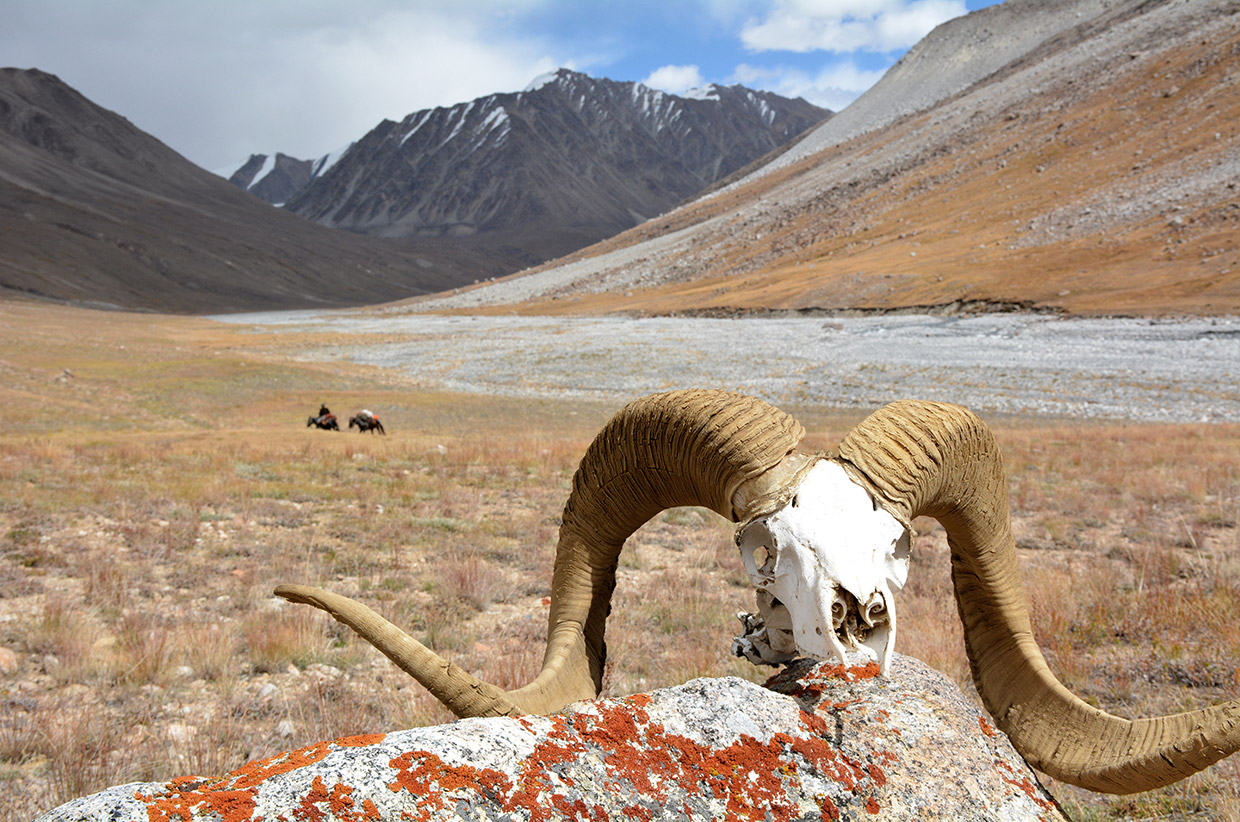 Ahead of us thousands of glistening icicles hang from the undercut of a glacier, dripping into rivulets beneath. This rarely visited spot marks the end of our hike, and the beginning of our rafting. Or so we thought.

Eight days later Jon and I are standing at 4,500m, surrounded by some of the most spectacular scenery on Earth. Ahead of us thousands of glistening icicles hang from the undercut of a glacier, dripping into rivulets beneath. This rarely visited spot marks the end of our hike, and the beginning of our rafting. Or so we thought. The water here is far too shallow for the rafts, so we have to walk back down the valley for half a day before there is enough water to float in.

Even here, it’s rarely more than a foot in depth. We lie flat on the boats to remain buoyant in the skittish water, sliding and scraping over the rocks until we are forced to get out and pull the rafts through the pebble spits that intersect the river as it changes course from one channel to another.

Our confidence grows with the widening river, but nothing is certain as we crash from one set of rapids into another. Some days later we’re crouching between two boulders desperately trying to get warm. After trying to negotiate a particularly tricky set of rapids, I found myself pinned on top of a rock, struggling to get free. Suddenly Jon, in his infinite wisdom, came hurtling towards me shouting ‘ramming speed’ at the top of his voice in a doomed attempt to dislodge me.

He capsized immediately and was flung headlong into the torrent. I, on the other hand, remained trapped on the rock. After scrabbling to the bank, Jon caught up with his raft downstream. No real damage – just a knock to the shin. I decided to get out of my raft and tried to pull it ashore, but it was full of water and the current was too strong. It took both of us to finally drag it onto the riverbank, where we immediately peeled off our wet clothes and tried to get warm as fast as possible. I’m already starting to shiver uncontrollably and Jon doesn’t look like he’s feeling much better.

We take stock. We’re in a steep narrow gorge, and the yaks carrying our tent, food, and clothes are somewhere above us. They could be a couple of kilometres behind, or in front – without any means of communication, there’s no way to tell. We can’t afford to fall in again because we don’t have any more dry clothes, so we decide to pack the rafts away and walk to our agreed rendezvous some 20km further downstream.

The river is a far cry from the gentle stream just below the glacier we’d eased our rafts into a few days ago. Having figured out how to slide and scrape through the shallows, we are now faced with an altogether different challenge. As the river passes into narrow gorges, it’s impossible to see ahead, and we often find ourselves having to negotiate rapids well beyond our ability. It’s often only luck that sees us through to clear water as the river pummels through huge boulders. We learn the hard way to get out of the rafts and scout ahead when the river looks like it’s about to enter a narrow section, but we still frequently find ourselves glued to the side of rocks or being swept sideways into nasty undercurrents and whirlpools. 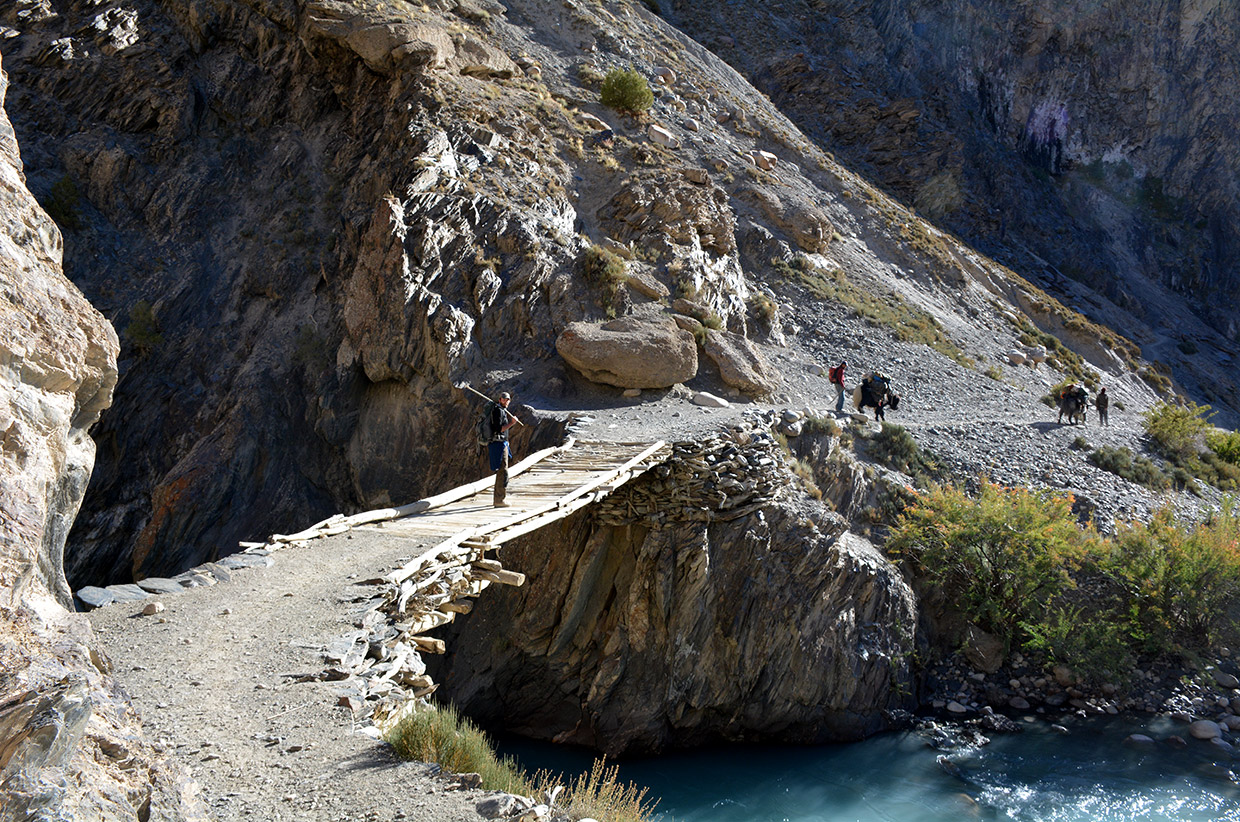 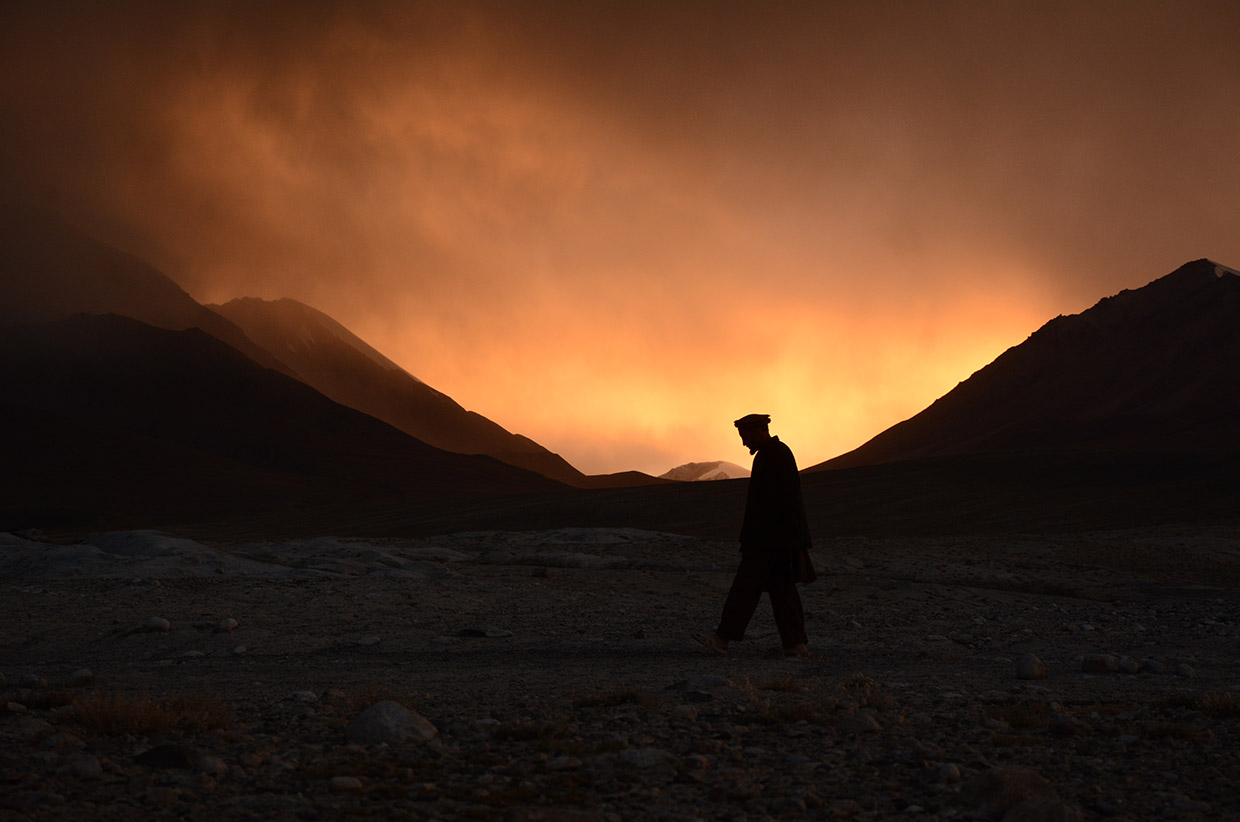 As the valley widens at Sarhad-e Broghil, so too does the river, and we drift through green fields and small hamlets towards the Tajik border. For three days we barely exchange a word as we glide through this bucolic landscape, each lost with our own thoughts. Over time, rivers change course and even direction. But they are also timeless and immutable. To sit in a small boat at the mercy of wind, current and wave, you are connected to something that hasn’t ever changed, and you are at once a part everything the water has ever experienced; all the people who have ever lived by it, crossed it, swum in it, or fished in it. It is strange to think that this lively mountain river ends its life in muddy ignominy in the deserts of Uzbekistan, where it used to flow happily into the Aral Sea.

At this point in our journey, the river becomes the international border between Afghanistan and Tajikistan, and we can’t go any further. It’s tough having to stop here. We’ve bashed our way down the river this far – more than 200km of rafting, unintentional swimming or portaging down uncharted water. But there’s more than 1,000 miles more river to raft before it reaches the Aral Sea. That’s 1,000 miles of adventure. We’ve unlocked a small part of the river by rafting from the source, but we’ll have to save the rest for another expedition.

This is the first time either of us can claim to have achieved a ‘first’ – at least in an expedition sense. No-one has done this before and no-one thought it was a good idea when we decided to do it. But we made it, stick thin, sunburned and wind-cracked. The River Oxus is navigable. It has been an adventure from start to finish, and one that we both hope to continue in future expeditions down the river.

Jonathan Rider currently consults for UNESCO in Afghanistan, where he has been based for the last four and a half years. He studied archaeology at the Universities of Nottingham and Oxford.

Edmund Le Brun worked in Afghanistan for three years having graduated from Oxford University. In 2016 he co-founded a social enterprise called Ishkar which brings contemporary craftsmanship from countries at war.

Watch the film from their journey here

Breaking Boundaries in the Balkans Through The Wardrobe 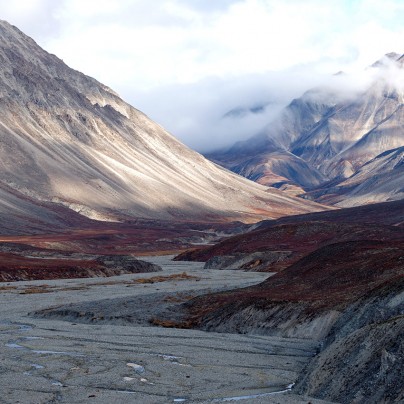 From Yakutsk to Okhotsk Clemens Ratschan 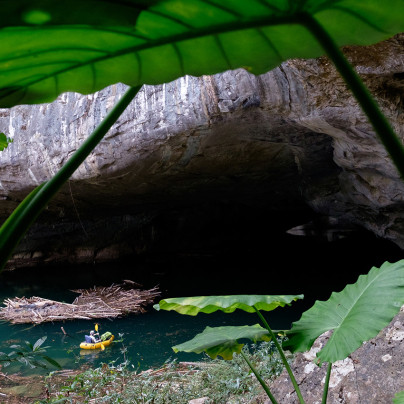