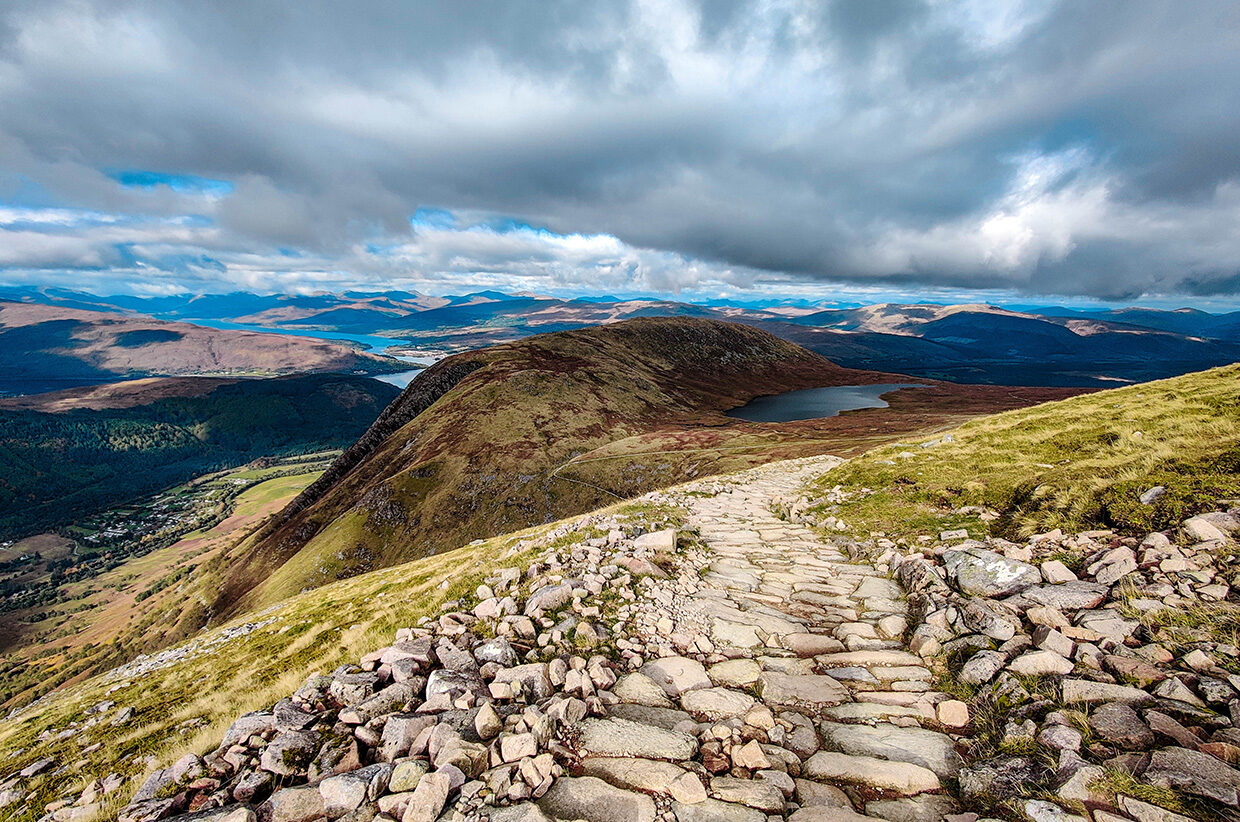 Caring for the UK’s highest mountain, and why it needs our support more than ever.
Written by Alex Roddie // Produced in partnership with the John Muir Trust

In 2021, conservation charity the John Muir Trust are celebrating 21 years of caring for Ben Nevis – one of the UK’s most magnificent wild places. But what is wildness? And why is it important? Here’s why the Trust needs your support.

For those who love adventure, wildness can mean many things. It’s the birdsong that greets us when we unzip our tent on a bright springtime morning. It’s the otter’s footprint on the sand of a remote storm-lashed beach. It’s the feeling of vast open skies above us as we run the ridgeline, relishing in the solitude and the freedom, and it’s the sparkle and crunch of snow beneath our crampons. Wildness gives shape and context to adventure. Perhaps, for some of us, even meaning.

Wild places are essential for the well-being of people and wildlife, but they also have immeasurable value in their own right – and they are fragile, threatened by development, climate change, and human interference. These special places need our care and protection.

The John Muir Trust is a conservation charity committed to exemplary land management and the protection of wild places for the benefit of people, wildlife, biodiversity, and our climate. Alongside communities nationwide, they connect people with wild places, campaign to protect those places, and restore and rewild land for the common good. The trust owns and looks after some of the wildest places in the UK, including several that are well known to hillwalkers and climbers: East Schiehallion in Perthshire, Glenridding Common in Cumbria (including the summit of Helvellyn and the famous Striding Edge), part of the wild and enigmatic Knoydart peninsula, Quinag in Assynt, and Ben Nevis, the UK’s highest mountain. Thanks to the Trust’s careful management, these world-class landscapes are flourishing for the benefit of ecosystems, wildlife, and people alike. 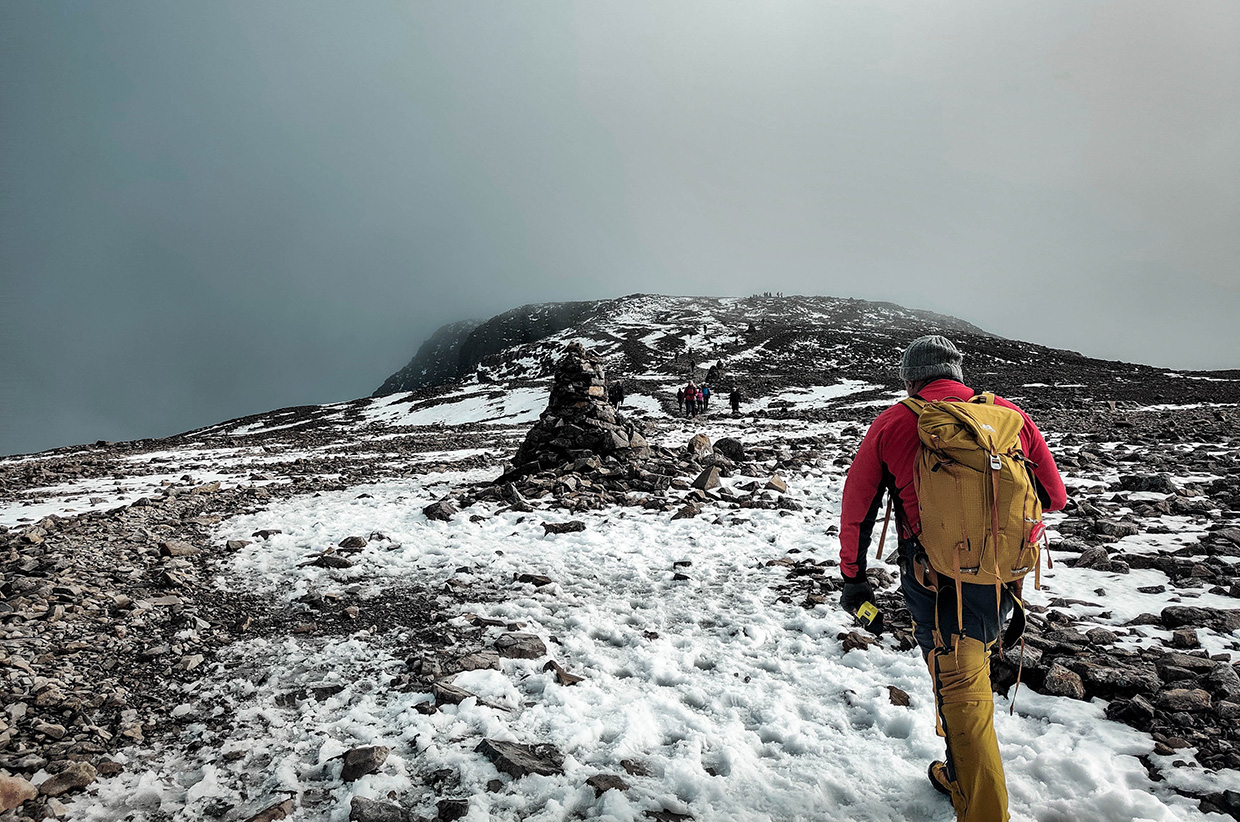 21 Years of Caring for Ben Nevis

This year, the John Muir Trust are celebrating 21 years of caring for Ben Nevis – an area including the summit itself, the neighbouring Munros of Càrn Mòr Dearg and Aonach Beag, and a significant area of woodland and meadow in Glen Nevis.

It is a charismatic landscape of rugged peaks, wooded gorges, and some of Britain’s most famous mountain terrain. The arête from Càrn Mòr Dearg to Ben Nevis is an all-time classic mountaineering route, and one that has thrilled and challenged generations of mountain lovers. Most visitors climb Ben Nevis using the mountain path from the west, and its upper half is managed by the Trust, who work to minimise the impact of 140-160,000 hill-goers each year: gathering countless bin bags full of litter, working to repair and restore paths, and much more.

Climbers will be focused on the Ben itself, but if you haven’t been for a walk through Glen Nevis, climbing up through the spectacular rocky Steall Gorge, then you’re missing out on something special. The woodland here is a perfect habitat for wildlife such as pine martens, golden and white-tailed eagles, water voles, rare butterflies such as the chequered skipper, and 75 species of lichen (33 of which are nationally rare). Such a wealth of biodiversity is precious, and visitors can feel how special it is as they climb the rugged path up through the gorge, listening to the birdsong and watching insects flit in dappled patches of sunlight.

The Trust carries out regular wildlife and habitat surveys here. They also control red deer numbers to allow native trees to regenerate. Heavy grazing pressure is a key threat to wild Scottish woodlands, as deer tend to eat saplings before they can get established – one reason why much of the Highlands has such sparse tree cover. To help minimise the impact of human visitors, the Trust carries out path-repair work and conducts regular litter picks. Peatland blankets many of the hillsides nearby, but erosion of the ancient blanket bog is an increasing problem, as eroding peat releases historic CO2 into the atmosphere, accelerating climate change. One hectare of peat can store up to 70 tonnes of carbon per year. The Trust is working to prevent peat bogs from drying out and releasing stored carbon.

Over the last 21 years, the John Muir Trust has achieved some remarkable things on Ben Nevis:

The Trust’s vision for Nevis is of flourishing native woodlands, heathlands and uplands; a place where nature is given free rein to develop a natural mosaic of wild landscapes and habitats that lock in carbon; where people are welcome but their impact on the landscape is minimal, and the mountain and its diverse plants, insects and wildlife are protected and valued for generations to come. 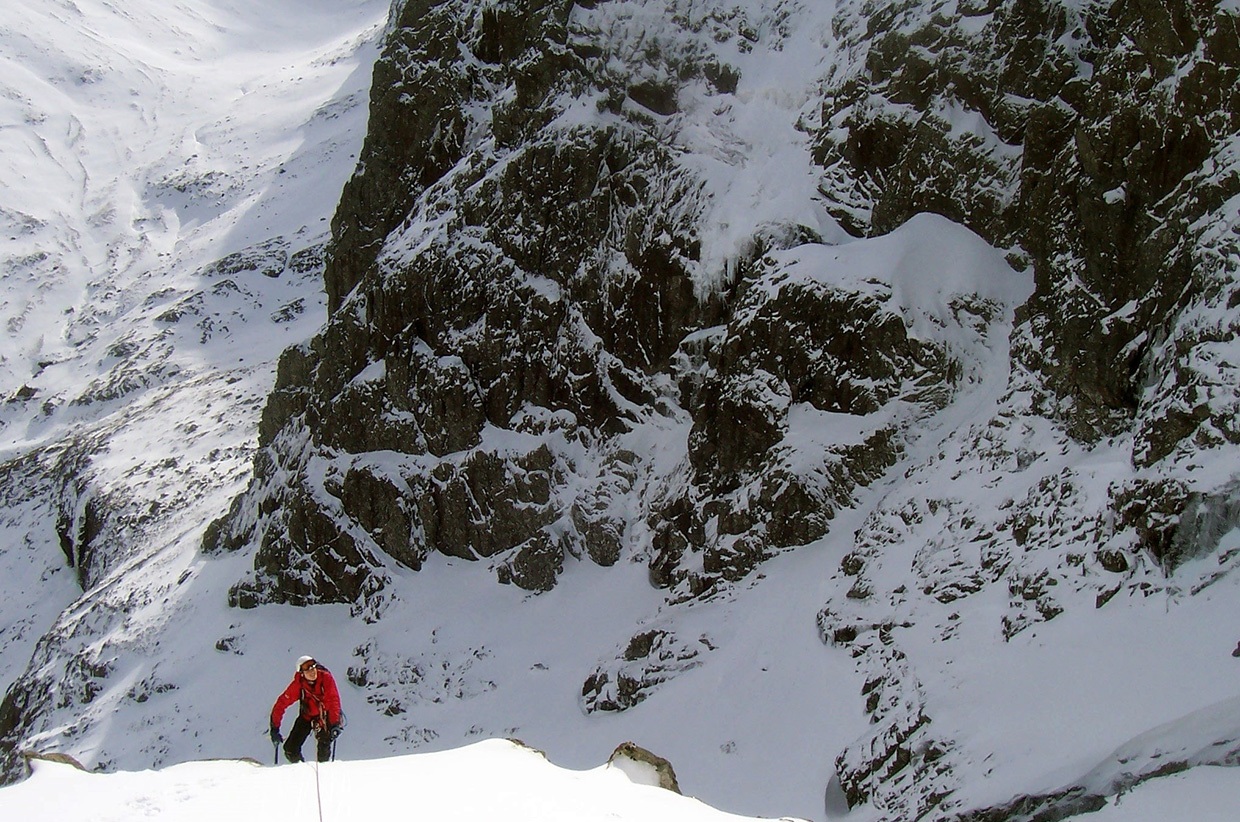 By Alex Roddie, Editor of Sidetracked

For me, Ben Nevis is a place of drama, magic, and many of the stories that underpin the person I am today. As a climbing-obsessed teenager, it was the legends of the pioneers who cut their teeth on the North Face that enthralled me the most: Harold Raeburn hacking steps up Green Gully with a wooden-handled ice axe, Tom Patey on Hadrian’s Wall, Jimmy Marshall and Robin Smith on Orion Face Direct. The North Face of Ben Nevis is a forge of experience and a place where characters are made and tested. It was only natural that I yearned to add my own stories to that shared mythology.

I climbed many of the lower-grade classics, and they enriched my life beyond measure – Ledge Route, Castle Ridge, Tower Ridge, North East Buttress. But for all my starry-eyed dreaming about the imposing cliffs of the North Face, the route that bewitched me the most was the arête between Càrn Mòr Dearg and Ben Nevis. This blade-like fin of rock, sculpted by prehistoric glaciers, is either an easy climb or a hard walk depending on your point of view, but everyone can agree that it’s one of the best ridge routes in Britain. Especially in winter.

I first crossed the CMD Arête many years ago in summer conditions, and was so enthralled by its perfection, its graceful curve around the lip of Coire Leis, that I returned many times. The thing about Ben Nevis is that you can’t appreciate its full majesty by climbing it via the Pony Track to the west, taking the zig-zags up the easiest route. The mountain looks broad and even a little uninspiring from this side, but take the CMD Arête around the back, approaching with full view of the magnificent North Face, and you will make memories for life.

My most memorable crossing of the arête took place in November 2009. The winter’s first cold snap had deposited a good dump of snow on the mountain and I set out with my friend Isi, keen to take on this big route in the limited winter daylight hours. Crossing the arête in a near whiteout, treading carefully to avoid the fresh cornice already building on the narrow crest, we could feel the sting of spindrift on our faces and the call of another winter climbing season just around the corner. The excitement of winter, the novelty of crampons after a summer in rock shoes! Tantalising views of the North Face opened up in front of us, revealed and then concealed again by ragged holes in the cloud. And then, as we reached the summit cairn at dusk, the clouds suddenly lifted and golden light spilled over the patchwork of moor and lochan far below. We met no-one else that whole day. Ben Nevis was ours alone. We descended in the twilight, lost in the wonder of it all.

This mountain means more to me than I can ever put into words. It’s not only a world-class landscape and a precious habitat; it’s an integral part of who I am. For me, wildness is a big part of what makes life worth living. 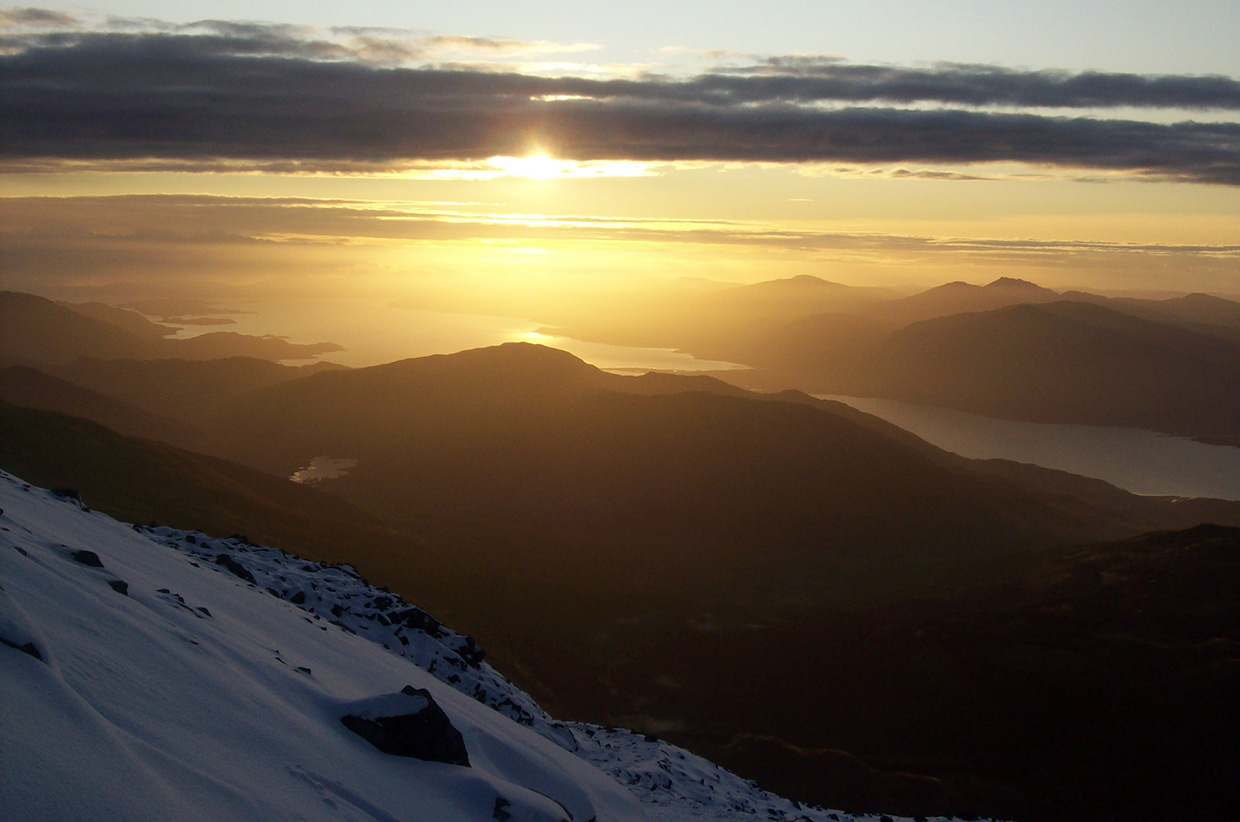 In 2021, the John Muir Trust aim to raise £100,000 to help care for the UK’s highest mountain. As a community-focused charity, the Trust depends on voluntary contributions to help fund its essential conservation, restoration, and rewilding work. And as COVID-19 has shown us all how vital wild places are for our physical and mental well-being, leading to an explosion of interest in the great outdoors, it’s more important than ever that the value of wildness is understood – and that these irreplaceable landscapes are looked after as they should be.

Your gift to the John Muir Trust will help protect and restore wild habitats, manage visitor impacts, regenerate woodlands, and provide education and engagement with communities both local and widespread. You can either make a one-off donation or become a monthly donor. 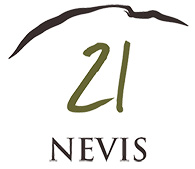 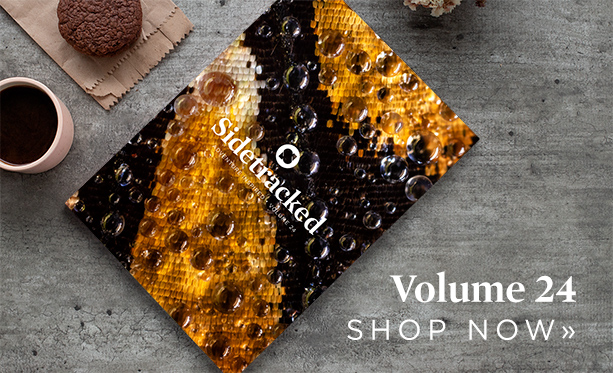