A Note to New Adventurers 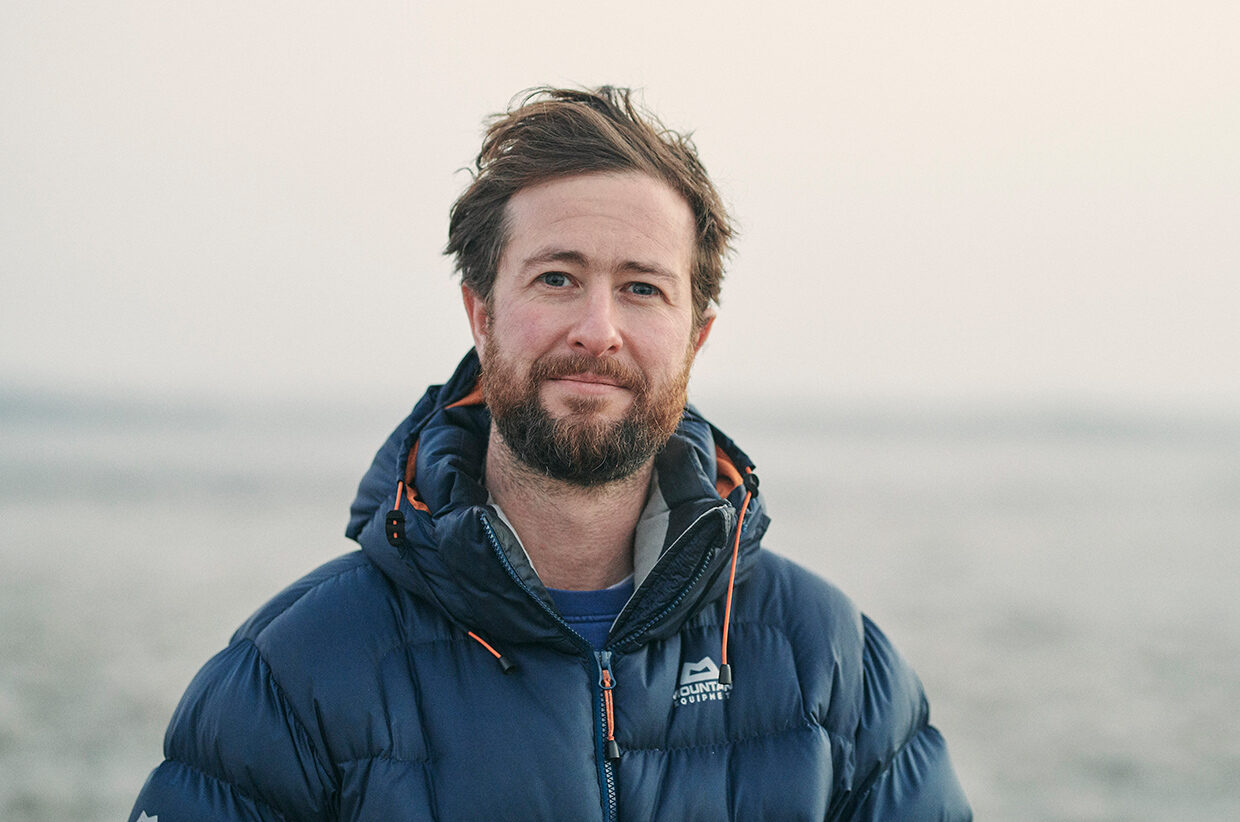 In Conversation with Teddy Keen
Written by Marie Audemard

Exploring the landscape to inspire and help children do the same, Teddy Keen details his passion for the outdoors and how his two kids inspired him to create The Lost Book of Adventure.

Sidetracked: You grew up in an adventurous family. How was your childhood?
Teddy Keen: I had an interesting childhood. My parents separated when I was three years old and I went to boarding school at the age of seven. My dad lived in Scotland, so from a young age my older brother and I were often exploring the hills, woods, and lochs with paintbrush, fishing rod, or shotgun in hand. Apart from that, we had a normal childhood – but there were moments when it was pretty feral, and in close contact with nature.

What is your current job?
That’s a good question – I’m not sure I’d call it a job. I am a writer and illustrator of children’s adventure books. That’s essentially what I spend my time doing in between visiting schools, doing festival talks, and going on adventures. At the moment I am doing a talk based on an Amazon expedition I did in 2019. I try to introduce the kids to the books, but also to the idea of exploration and some of the environments that I have been to. From my experience, when you can show photos, videos, and artefacts from a place like that, it really helps them imagine themselves in those wild places – I’m just planting the seeds for their own missions.

You have two children yourself. How is it for them to grow up with a dad like you?
I have a nine-year-old and seven-year-old boy and girl, and they come on smaller adventures with me. We spend time bivyying in the mountains or canoeing wild Devonshire rivers. They’ve helped build shelters, sail rafts, pan for gold, and have generally been my adventure guinea pigs. They also come in handy when preparing talks. In many ways they are young explorers, but I don’t want to put too much pressure on them. They seem to enjoy it, mostly, although I wish they’d carry more weight in their rucksacks. 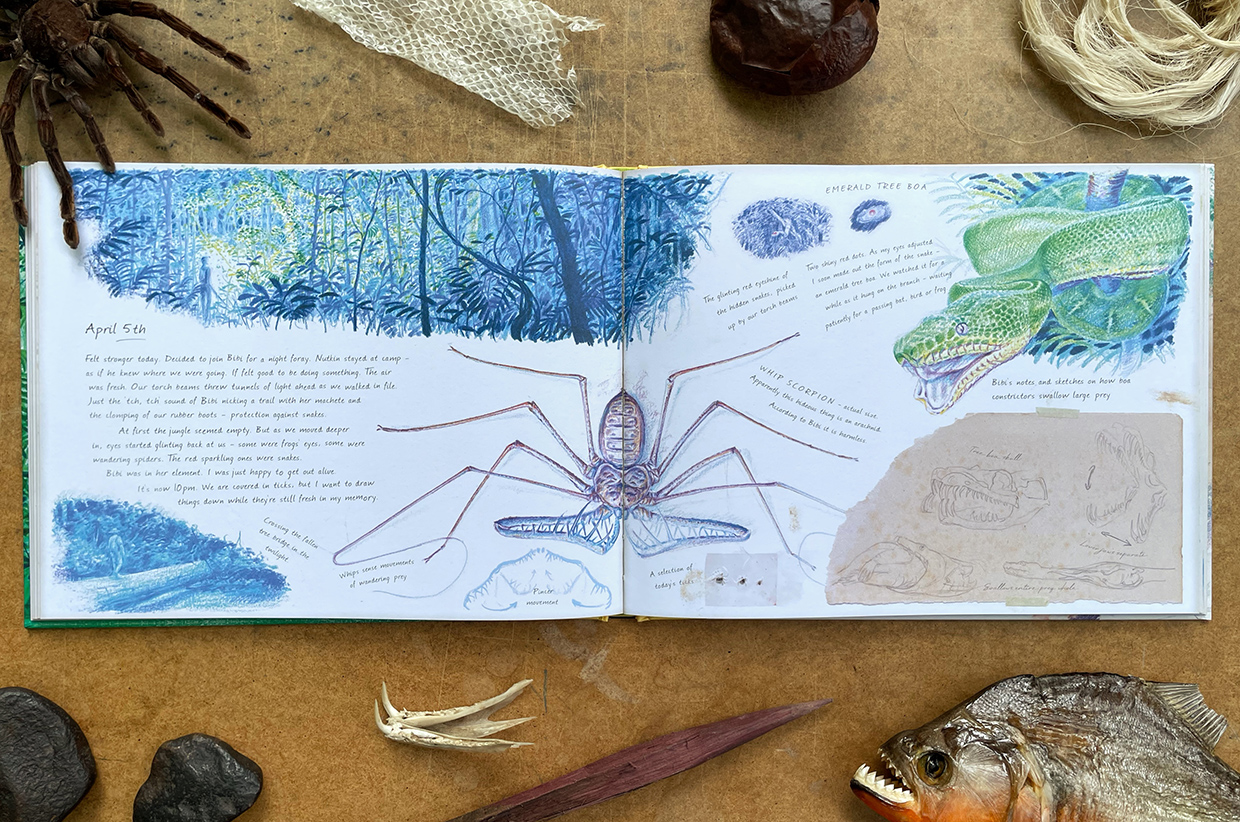 When did you start going on expeditions yourself?
In my mid-twenties I got the urge to travel and explore a bit of the world. The adventuring I do normally serves a purpose – whether it’s to raise money for charity, or something personal, like retracing my grandpa’s escape route across the mountains in the war or researching my books. I now get to go to these amazing places and try to communicate what I discover, and then give that to children.

Tell us more about one of your trips.
There’s an amusing one that comes my mind. Some years ago, myself and a couple of friends decided that we would attempt to raft our way down the Tara Canyon through Montenegro to the Mediterranean. The raft was just made from some inflated truck inner tubes. However, at the Bosnian border we arrived to find the river flowing 2,000 miles in the wrong direction – we’d somehow misread Google Earth. Massively. It was also over 40°C and it was snowing ash from wildfires. Living off some cheese and a hard loaf of bread (we met some elves) we headed up the canyon – swimming, climbing, and scrambling, mostly.

At night we lay on the riverbank trying not to think of the brown bears that were around us. It was great not knowing how far we would get, but we did eventually make it. I think we may have been the first people to ascend parts of that river. Sadly, we managed to lose our camera, but that somehow just helped to etch in those memories of our ludicrous jaunt.

Getting to the books. What inspired the leap into writing adventure books?
Although I had a good career in communications, after having kids, and not really seeing them growing up as much as I’d like, I realised that I needed to be doing something closer to my heart – closer to the outdoors. I spent time thinking about what I could do, and I soon realised that I wanted to help inspire and give knowledge to kids about the outdoors and to unlock a world of adventure for them. On my shed wall I wrote the words ‘Inspire escape by any means necessary’. After a good mulling over, I thought perhaps a book might be the right place to start. Two years later I had written and illustrated a hefty tome titled The Lost Book of Adventure. 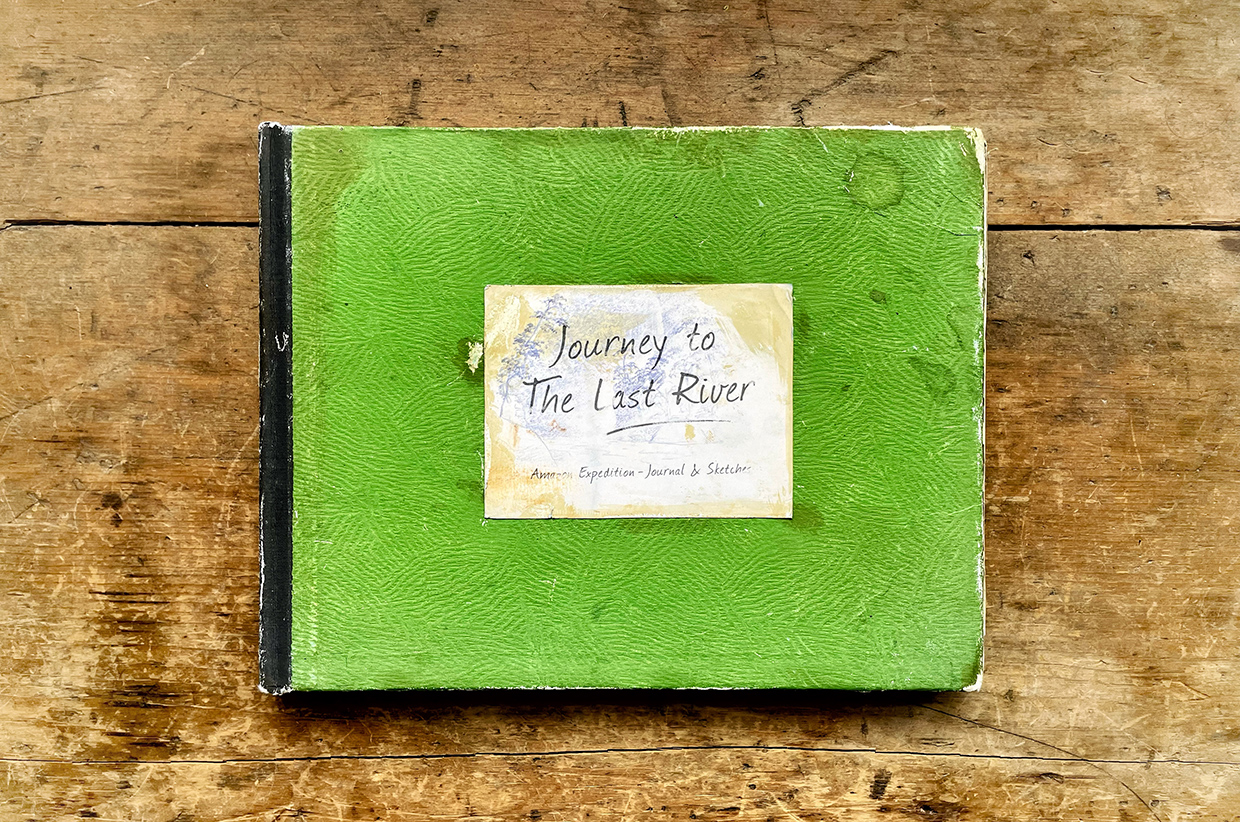 But you are not listed as the author. Can you tell us about the mysterious Unknown Adventurer?
The idea behind this book is that no-one knows who made it. The story goes that I discovered an old metal chest on one of my trips to the Amazon, full of the life’s work of an unknown artist and adventurer. The chest contained notebooks, diaries, illustrations, and stories from a lifetime of adventure. The truth is that nearly all of these stories are based on real people and events, many of which I’ve grown up with. But I wanted to create a bit of mystery so that young readers get to imagine who the author could be, and in a way place themselves in this person’s well-worn walking boots. The Lost Book of Adventure is the accumulation of all this adventuring knowledge.

In your books, you chose to mix stories with how-to guides. Why?
For me there were two keys to unlocking the world of adventure for kids. Firstly, I needed to inspire them – to somehow make them feel the rush and excitement that comes with stepping into the unknown. This is where the stories came in. Then there was the confidence element. Most kids don’t have the self-belief to think they can actually do this stuff. The pages of knowledge are there to show them how to do almost everything. I even took it to a level where adults would be able to use the book as a guide. This way the whole family would feel empowered. Inspire, then show how – that’s when things start happening.

The Unknown Adventurer’s latest book took you deep into the Amazon. How did you find exploring this part of the world?
For book number two, I had the idea to write a journal about the Unknown Adventurer’s search for a lost river in the Amazon. Obviously, I had to go and research it for real. It took three months to find a river that hadn’t been explored by canoes. I had heard of one person who had tried to get up there, got so far, and then had to come back. This was back in the ‘80s. I managed to get hold of him and he became our fixer for the trip. He put us – I travelled with a friend, Chris – in touch with some local Indigenous guides, without whom the trip wouldn’t have been possible. Where we were headed is a remote mountain range within the Guiana Shield. Things didn’t get off to the best start when Chris’s backpack and half our gear went missing between the flights. So, no satellite phone for us. We were on our own. 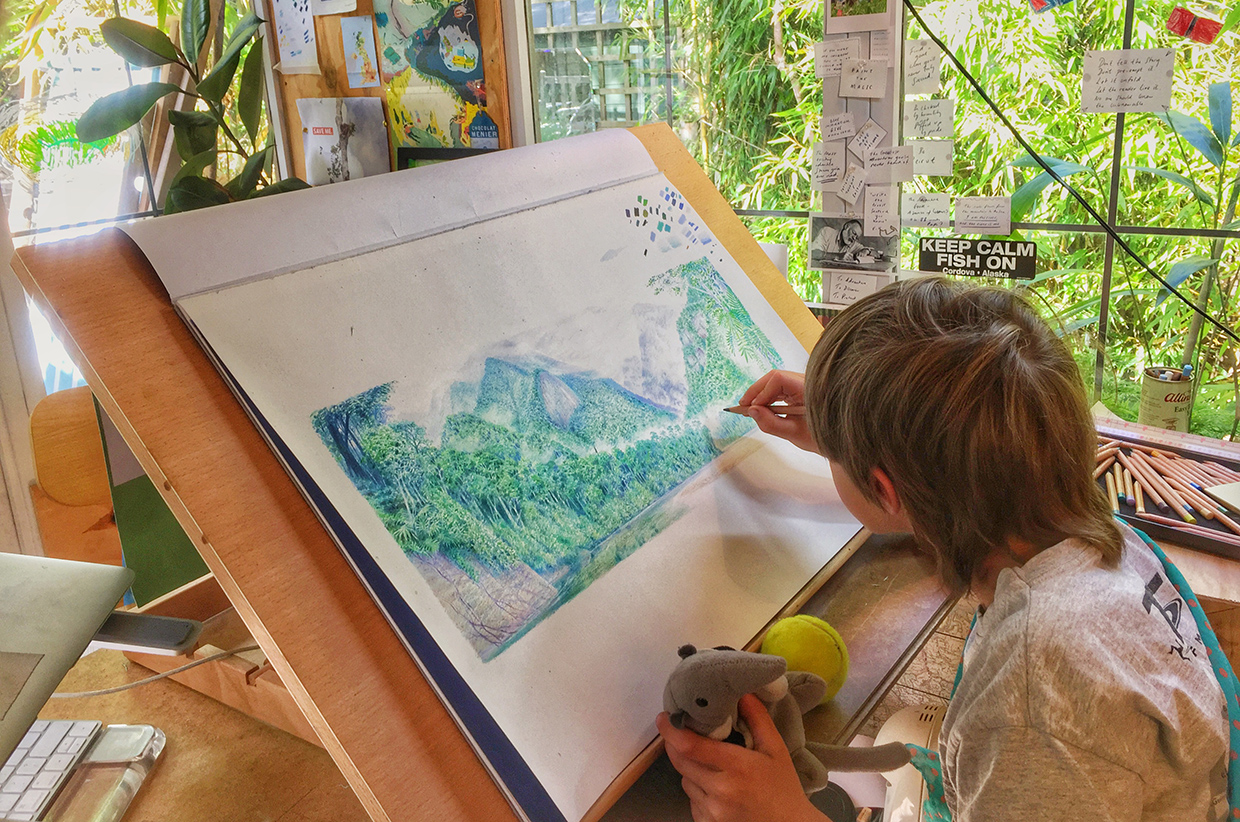 When you finally found the river, what happened?
We navigated as far as we could, but eventually it became too dangerous with the canoes. We had a few close moments – including a capsize in rapids that swept us into a pool where we had previously been watching a congregation of electric eels. We found ourselves trying to save our canoe and belongings (now completely submerged) while surrounded by these wonderful but dangerous creatures. In reality, we were more worried about losing our canoe, as we were a long way from anywhere and had no communications. After that we continued on foot.

As we got further into the mountains we made some incredible discoveries, including a potentially new species of butterfly, as well as an unrecorded bioluminescent mycelium – all wonderful inspiration for the book and the talks. The highlight, though, had to be watching a large female jaguar swimming across the river in front of our canoe. That was quite something.

What do you think about being the first to explore a territory?
I think times have changed a lot – 50 years ago it was all about conquering and being the first to do something, and I think that it’s becoming a lot more about the why. Why do we do stuff? Why are we there? Is what I am doing important? Sometimes it is nice to be the first, because you may be genuinely stepping into uncharted territory and that’s a very special feeling, but now we almost expect there to be more to it than that.

However, it is the pull of the unknown, the sparking of curiosity, that is the greatest driver for our kids, so let’s celebrate exploration. We need more explorers.

How does it feel when you meet children who have been inspired by your stories?
It reminds me why I am doing what I am doing. When I see kids who are genuinely affected by the books, and when I hear the stories of their adventures, where my books may have played a small part in guiding them outside, it makes me deeply happy. I just listen to them and think it works.

The Lost Book of Adventure, and Teddy’s latest book, Journey to the Last River, are available in all good bookstores and online.
Follow Teddy on Instagram @the.unknown.adventurer, check out his website theunknownadventurer.com, and listen to The Adventure Podcast Episode 087
Portrait by Spencer Murphy // @mrspencermurphy