A Feather in the West – Behind the Scenes with Coldhouse 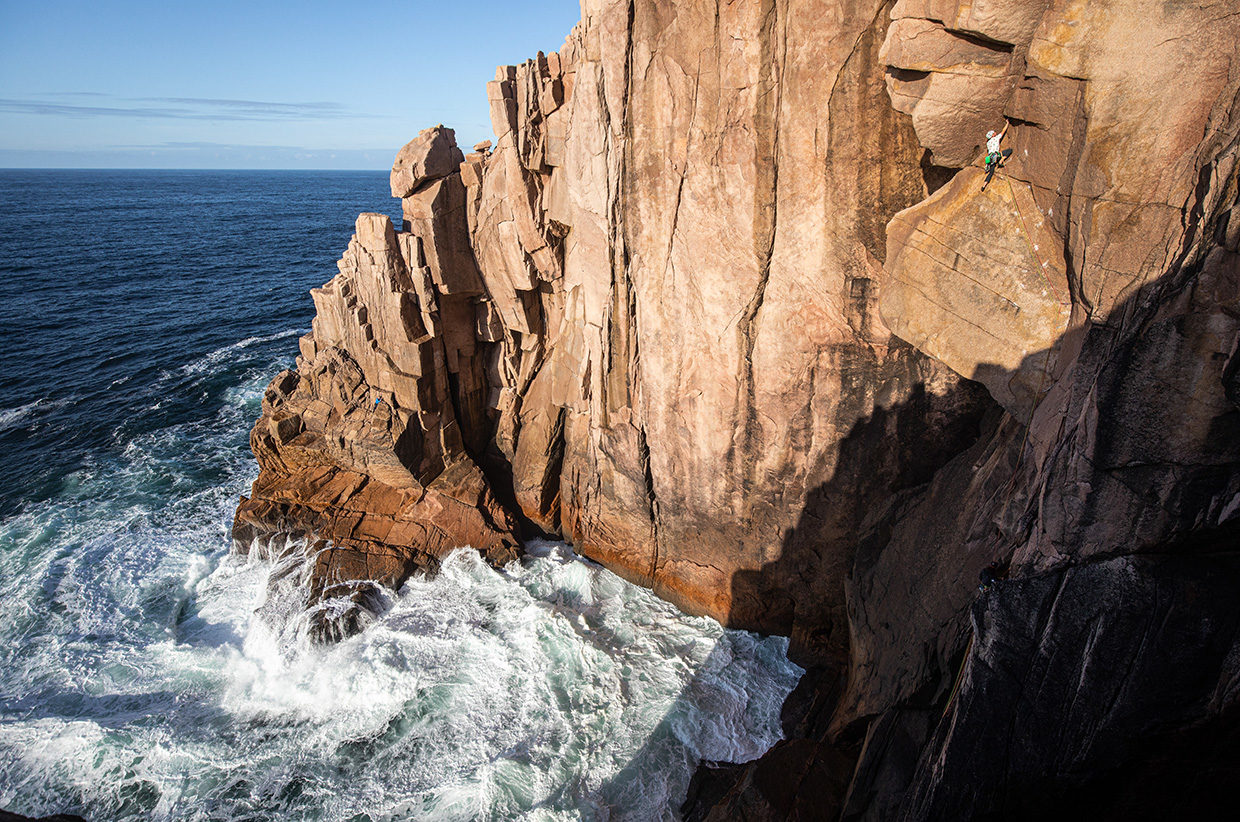 It’s late in the year, though, for the west coast, and things are looking unsettled… Mind the weather; there might not be a boat in September… You can get stormed in for weeks.

These were the sensible pieces of advice running around my head as Matt and I stood sheltering from the torrential rain in a tiny fisherman’s shed on the remote island of Owey. Owey lies off the coast of County Donegal in the far north-west of Ireland. It is, notoriously, one of the country’s most rugged and wild regions, exposed to all the weather the stormy North Atlantic has to throw at it. This was the location recce in July; what would it be like when we were due to come back and film in September?

At that moment I didn’t have high hopes. There could be way too much rain to make a climbing film, even if the notoriously choppy seas around the island were calm enough to make the crossing to the island in the first place. And it was not just the weather. The local boatman who took us there did not seem keen to have a bunch of filmmakers on the island. This film might be a write-off before we even get started. We knew that the rock climbing on Owey was world class, but could we make a film about it – and would we be welcomed by the locals? 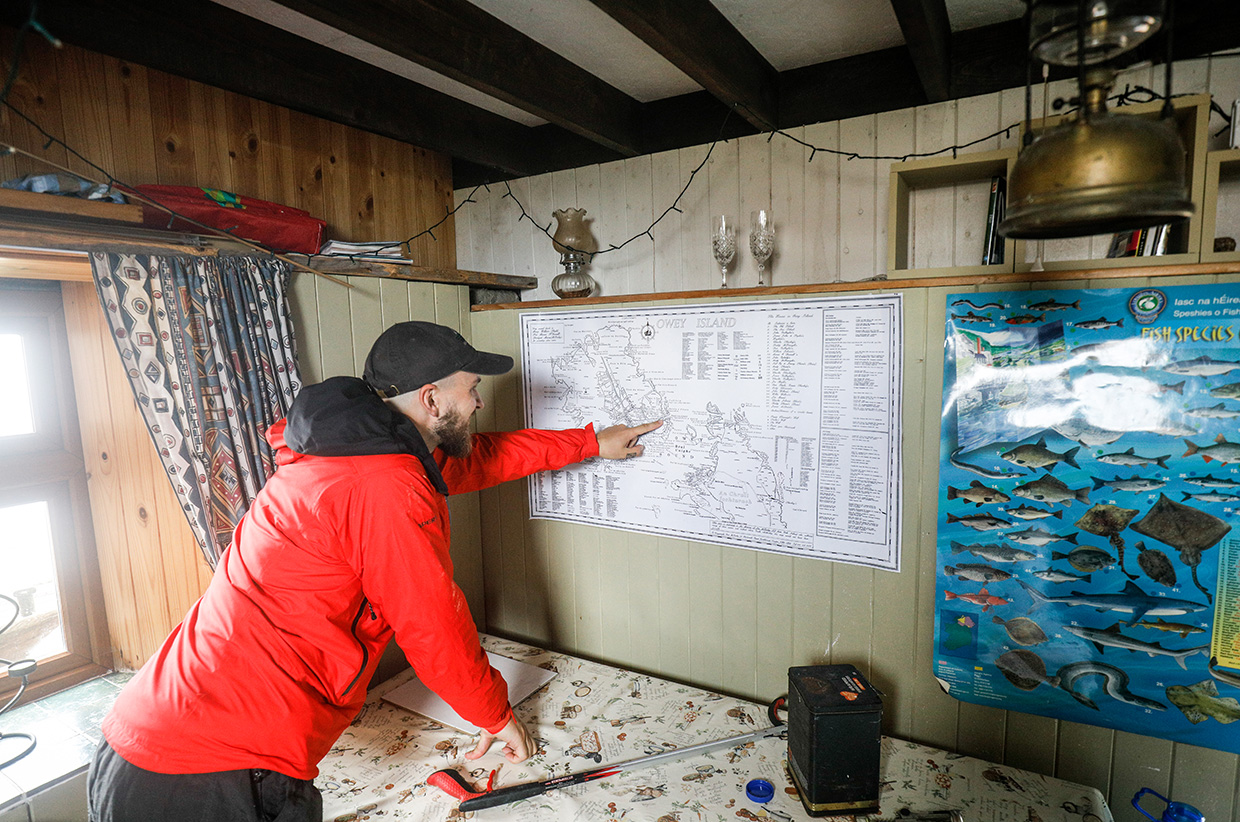 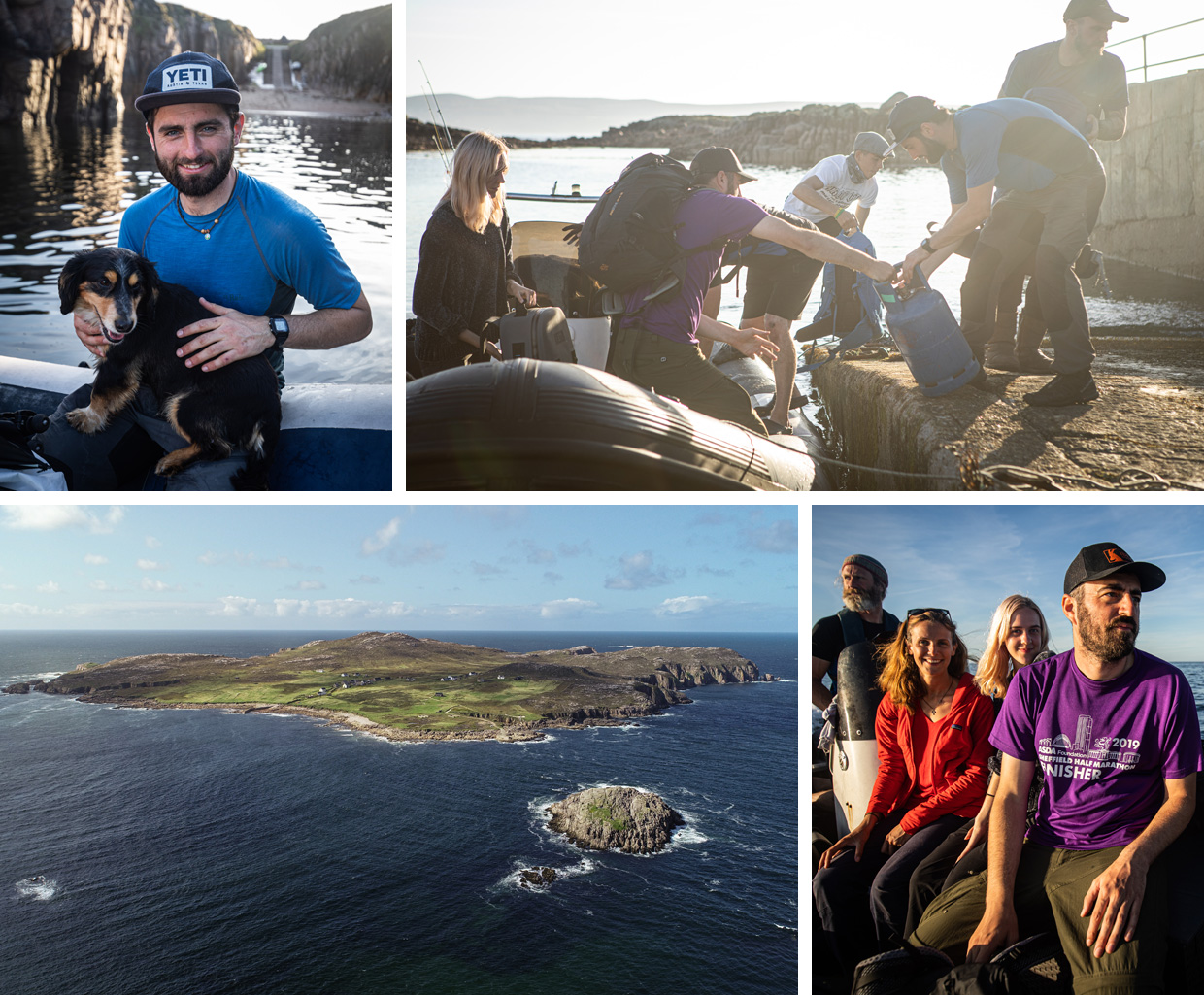 A few months later, myself and the rest of the crew, along with some of Ireland’s best rock climbers, were making our way over to Owey to begin the adventure of making a climbing film. I was still apprehensive about how the locals viewed the project. Our original boatman was suddenly not available to take us out, and neither were any of his mates. I started to ask myself why. The possible reasons weren’t hard to grasp. Would a film adversely affect their quiet corner of the world? It is easy to presume that people who choose to spend their time on a remote isolated island with no roads, electricity, or mains water do so for the peace and tranquility, an escape from the modern world. Would a film crew and a bunch of climbers ruin this tranquility? Would the publicity surrounding the film attract an unsustainable number of visitors, putting further pressure on fragile infrastructure and ecology? We had not quite answered these questions, and the whole team felt a huge responsibility to do right by the people of the island, especially as outsiders. As well as sustainable filmmaking, our hope – our need, really – was to make friends and find a supporting cast of locals on the island to add character and authenticity to the film.

Sid and Karen, on the back of a quad bike, were the first of these characters to materialise. News had spread on the local grapevine and they had come to help us move kit from the harbour to our accommodation – a good start! Sid and Karen bought the old post office in the 1980s and had been spending their summers on the island ever since. For the first 10 years they were the only ones visiting on a regular basis. They explained that until the mid-70s about 30 families lived full-time on Owey, making a living from farming and fishing. However, the closing of the school led to a gradual exodus to the mainland until there was no-one left living on the island. Today there is a small community on the island again. Descendants of the original inhabitants as well as some newcomers spend their summers on Owey, helping each other fix up the old buildings, going fishing, and enjoying the craic in the evenings.

With no electricity, summers can be an idyllic escape from the modern world, but the residents were quick to point out that the weather can be extremely hostile – the island can be cut off for weeks at a time. ‘You have to be good in your own company,’ we were told more than once, and ‘You have to have a good supply of bottles.’ They said that one of the best parts of island life is the spontaneous community gatherings that happen during the storms, when the only option is to sit in someone’s kitchen drinking tea – or something stronger – and enjoy the ambience.

On our first night, some of the locals invited us to join them for a few beers and traditional music. Doors are left unlocked on Owey, and neighbours come and go from each other’s houses borrowing things without the need to ask (only the alcohol is off limits). This community spirit, this willingness to help one and other, is typical of the island, but seems lacking in a lot of other places that are better connected to the modern world. Our welcome was heartening – but also added to the sense of responsibility to avoid any negative effect on this community that we had started to make friends with. They were quick to add that people that have not respected the locals have been firmly asked to leave. 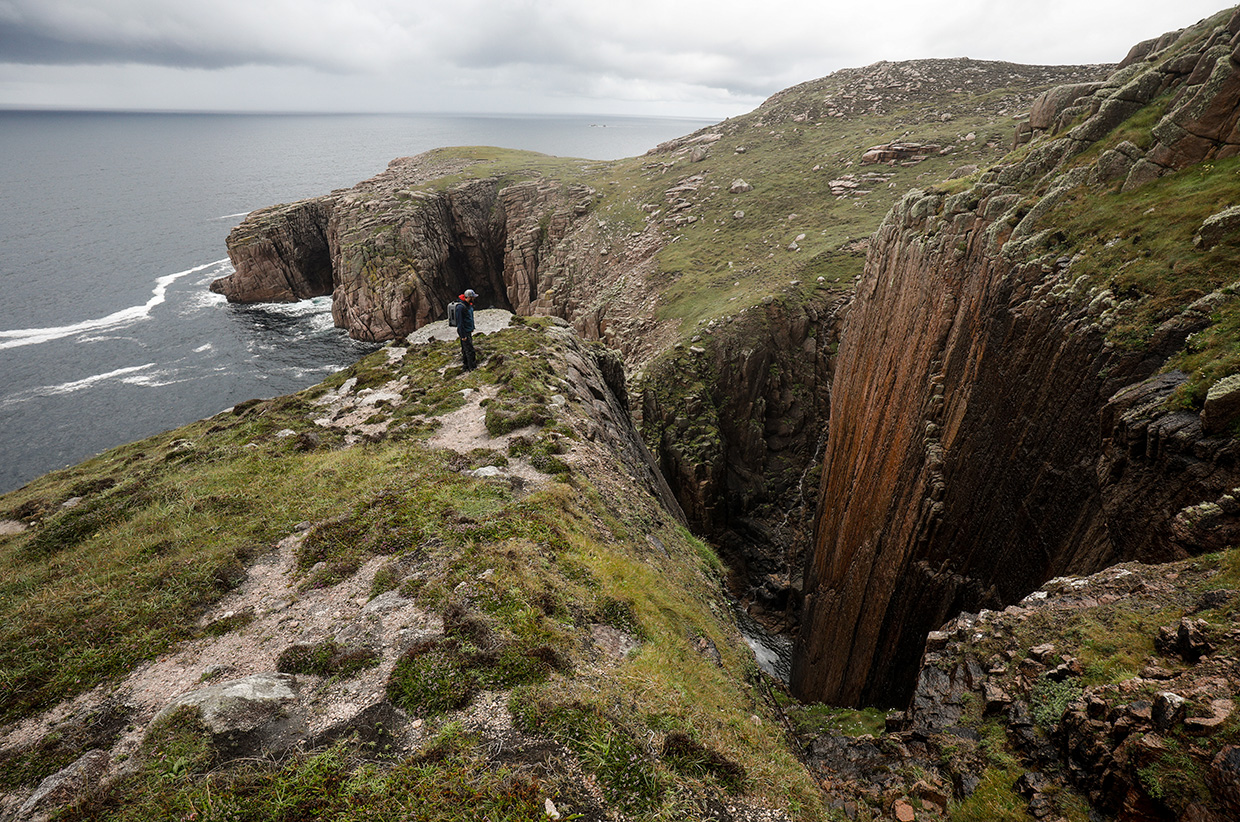 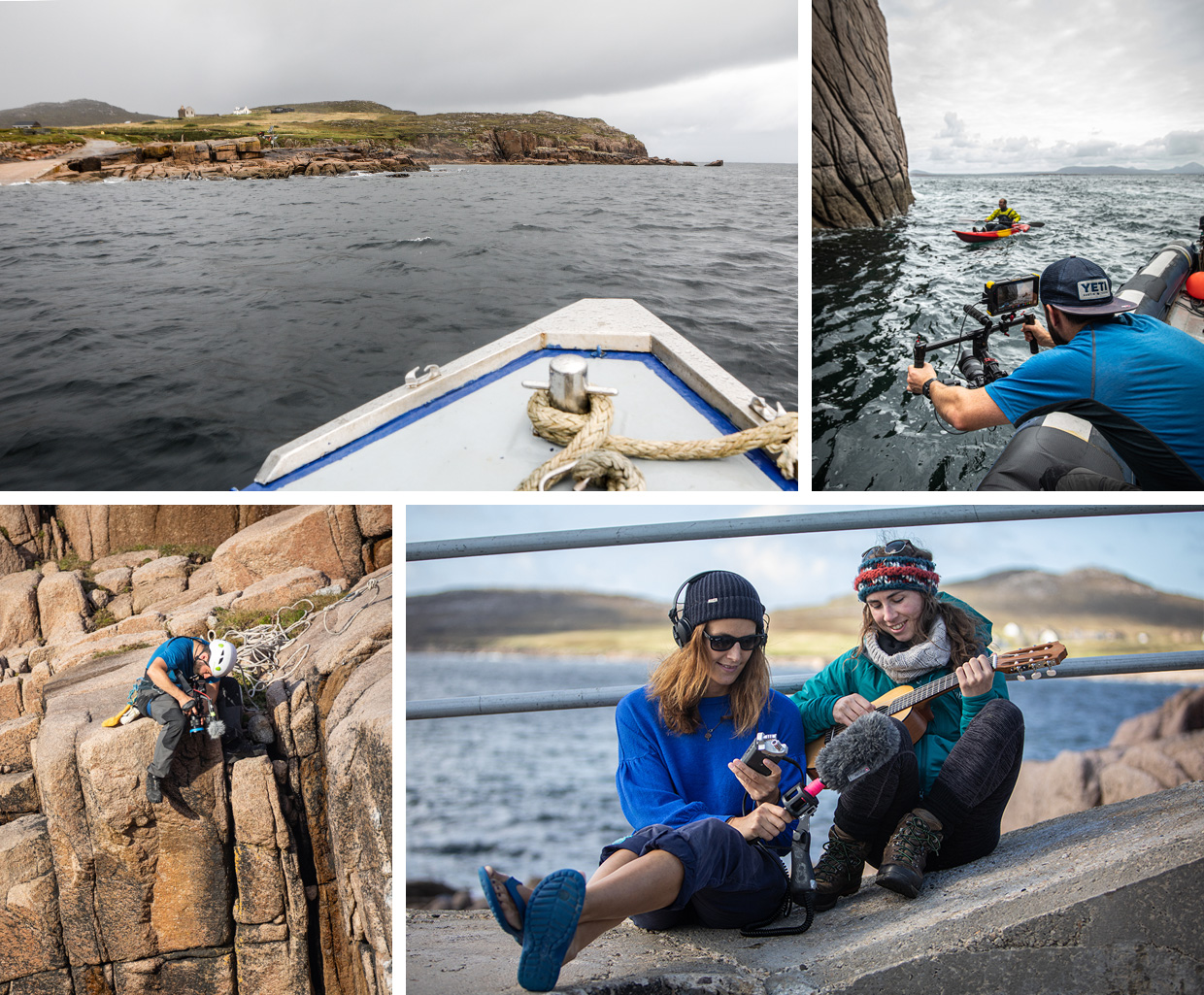 The only person who has tried to live on the island alone over winter in recent years is Niall. By his own admission it ‘kicked his ass’. Although fish is in plentiful supply, he found it hard to grow enough food on the island to sustain himself through the winter. The winters are long and brutal, with short days and massive Atlantic storms blowing in; it is a hard place to live on your own. Niall now lives on the mainland but spends as much time on the island as possible. He has planted vegetable plots and gardens, and is renovating an old home to use as a hostel for visitors. He does his best to keep the local stories and traditions alive, such as building the island’s traditional boat, the Owey curra – a small boat unique to the island that was once used for fishing and making the crossing to the mainland. He is dedicated to the upkeep and renovation of the island but is as determined as any of the other locals to maintain Owey’s character and traditions.

One year Niall brought a cow and a goat to the island to keep him company. In a hilarious turn of events, alone on the island the next winter the cow and the goat became best friends and are now inseparable, shunning the human population. The goat, Pio, has begun a vendetta against Sid for some unknown offence and can regularly be seen knocking down his garden wall in the evenings. Meanwhile the cow, Angus, eats all of the neighbours’ flowers in revenge for being tied up by them on one occasion, sparing the gardens of everyone else on the island. Stories like this give the island a character all of its own, a rich and unique folklore. It was a real joy to spend the evenings listening to Niall and the others tell stories about the island and its characters. The locals became an integral part of the film – almost as important as the climbing – and we felt that we had a duty to do right by the stewards of the island.

Tourism to Owey has so far been limited. However, the island has a huge potential draw for climbers thanks to a lifetime’s worth of unclimbed routes at all grades on spectacular rock, brilliant climbing above the breaking waves of the Atlantic. As well as their feelings towards us making a film there, we were keen to find out the locals’ opinion of tourism and development of the island as a climbing and sea-kayaking destination. Understandably they are keen to maintain the island’s character at all costs. They have rejected a plan to bring electricity to Owey, and limit construction projects to repairing and renovating existing structures. 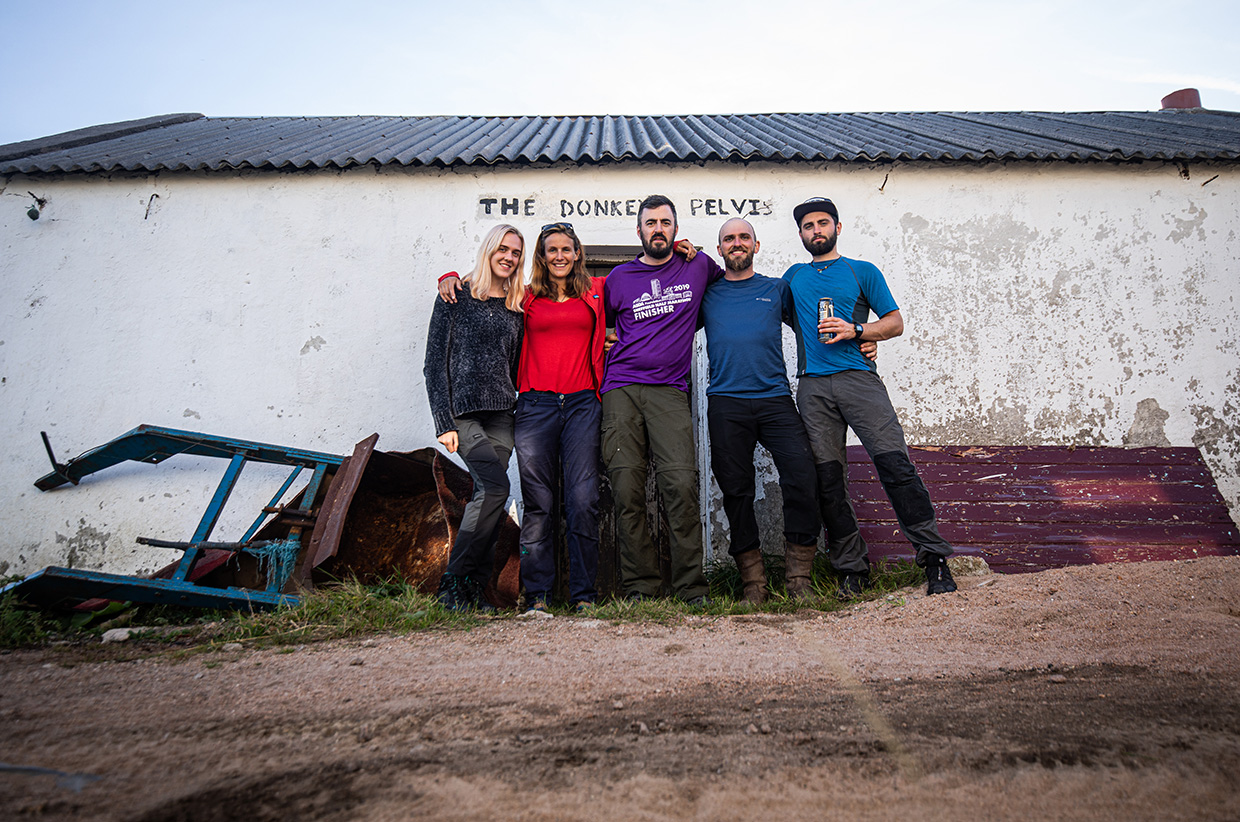 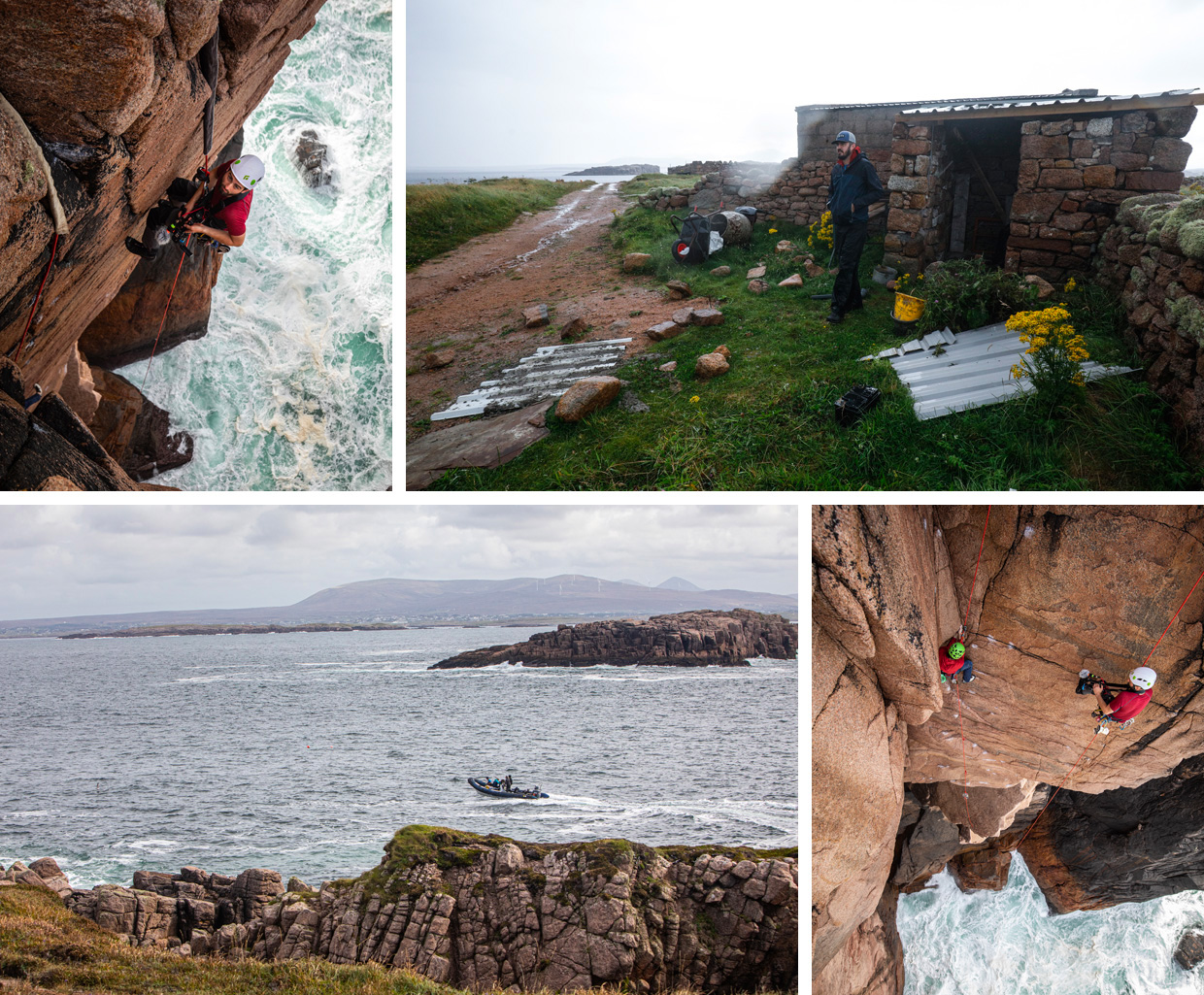 Owey is undoubtedly a spectacular destination, but the limited access to the island and accommodation should ensure that visitor numbers will be manageable. However, most of us have seen other tourist destinations become unsustainably popular in a short space of time. As fresh water is in short supply, large numbers of visitors would become a problem very quickly. Climbers have been accepted over the years because they have generally cleaned up after themselves and seem to respect the natural environment, but some larger groups of visitors have caused annoyance and damage and have been asked not to come back.

One man, Iain Miller, has been promoting climbing on Owey and Donegal for the past 15 years, has written the guidebook to the area, and runs a busy adventure company. We were keen to have him on board from the start. Originally from Orkney, he has developed close relationships with the small communities along the coast of Donegal, and is keen to spread tourism throughout the county. Spreading out where he is willing to take people has limited the negative impacts of overtourism in specific areas as well as sharing the income between communities. His support and guidance did a lot to allay our initial fears about the film having a negative impact on the island.

It is fair to say that the development of climbing in Ireland is behind a lot of the rest of Europe, so there is room for new routes on almost every crag in the country. This is part of what attracted us to make a film on Owey: the exciting potential of new routes on amazing rock, and people who are passionate about developing the sport for all to enjoy. As well as this, the idea of true exploration close to home is attractive, without needing to go off to Europe or further afield to feel that sense of adventure and otherworldliness. One of the climbers, Chloe, described this perfectly: ‘Owey is like being in another world, despite being so close to the mainland.’ The bigger picture here is that we as climbers, filmmakers, and outdoor enthusiasts will need to look closer to home in search of our adventures if we are to limit our impact by cutting back on the fossil fuels we use for travel. I hope that we can be mindful of the amazing jobs that communities such as the one on Owey do as caretakers of these often-fragile environments. 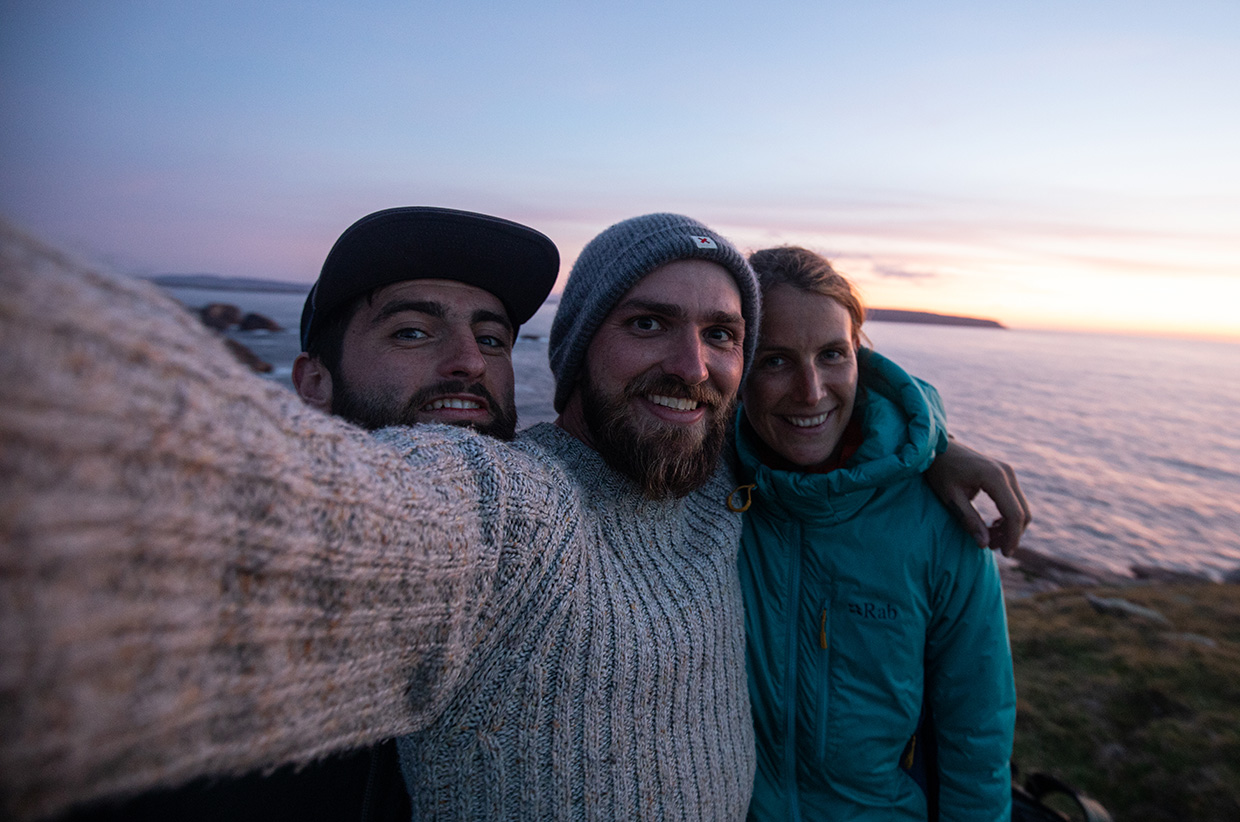 During our week on Owey all members of the team seemed to develop a strong bond with the place. The climbers managed some spectacular feats on the island’s golden granite and the sun shone for five solid days. We noticed that the lack of televisions and computers really brought everyone on the island together, especially in the evenings, to chat, drink, and play traditional music. The film grew organically from the climbers, the locals, and the island’s natural environment – as it should.

My feelings about our impact are still mixed. I definitely would not want to see the character of the island changed. The stories and community brought about by isolation, inclement weather, and the generosity and gregariousness of the locals all combine to make Owey a genuinely special place. However, if climbing becomes a greater part of the Owey story then that adds to the richness and character of life on the island – as long as it is sustainable. We went expecting to just make a climbing film, but we came away with a hundred stories unique to the island. Hopefully the film does a good job of depicting Owey’s character, as well as the amazing bunch of climbers that made the trip unique.