Manoeuvring through the Munros – An Interview With Hamish Frost 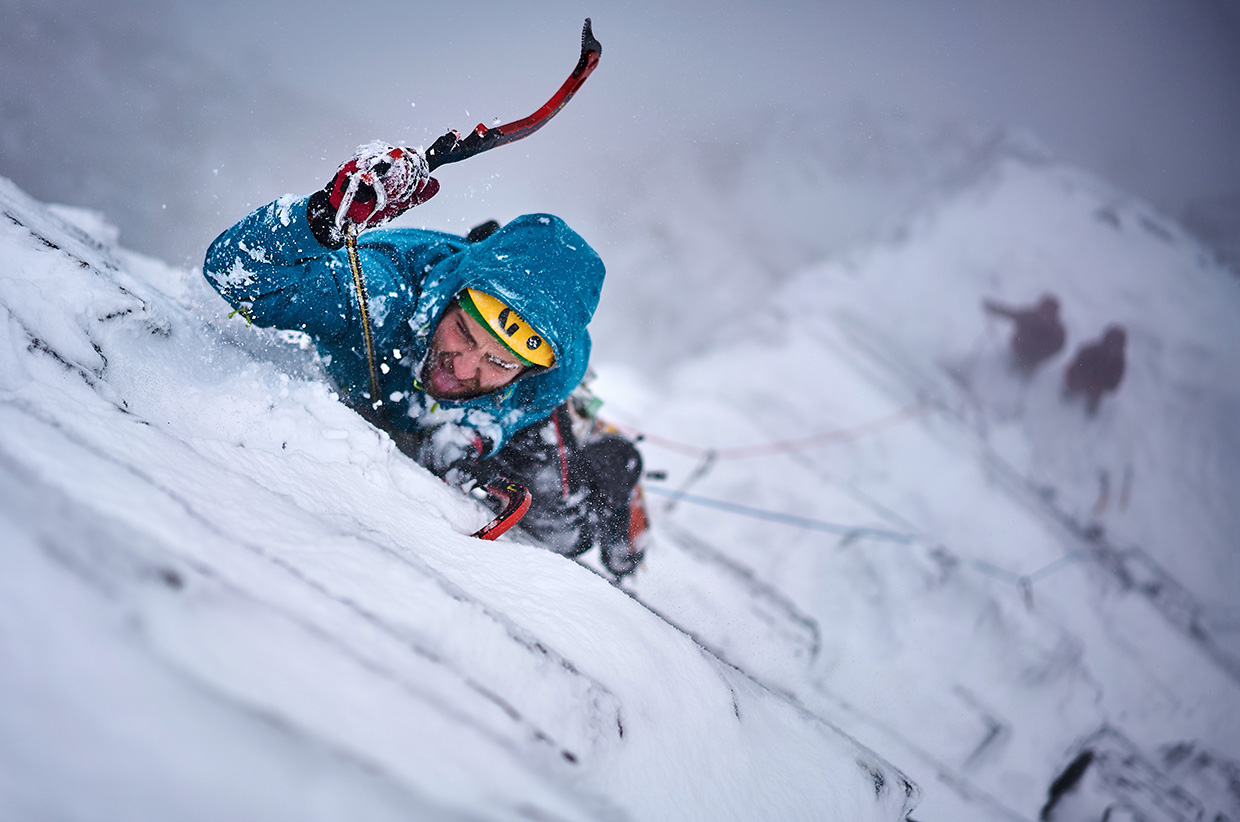 When Hamish Frost quit his day job, he knew he was taking a gamble. But photography is his passion and moving into adventure photography full time meant he could be out on the mountain every day. We spoke to Hamish to hear more about his life on the Munros, photographing the best that Scotland’s wildness has to offer.

Sidetracked: When did you get into mountain photography? What is it about it that you enjoy so much?
Hamish: I got into photography around five years ago and have been doing it professionally for around three years now. I find the creative process of trying to produce exciting images in tough and inhospitable environments really appealing. If it’s a particularly cold or wet day, then you’re fighting the conditions, trying to look after yourself and keep your camera kit working. If the best position for a shot is halfway up a cliff face, then you’ve got to work through the logistics of getting to that position. I also love the physical challenge – being fit enough to lug lots of camera gear around and stay motivated to keep pushing the shutter button when you’re exhausted, or maybe even a little scared, and would probably rather be anywhere but there! I think that the combination of all these aspects is what draws me to this genre of photography over anything else.

Photographing other people, you must have to do a fair amount of exploring, climbing and getting into position by yourself. Do you enjoy these solo parts of your trips out?
Yes, absolutely. In contrast to the increasingly chaotic world we live in, the mountains are quite a simple place to be. You’re just focused on looking after yourself and achieving whatever objective you’ve set out for yourself during the day. There are consequential decisions to be made, but no red tape to govern what you do. It can be very therapeutic. 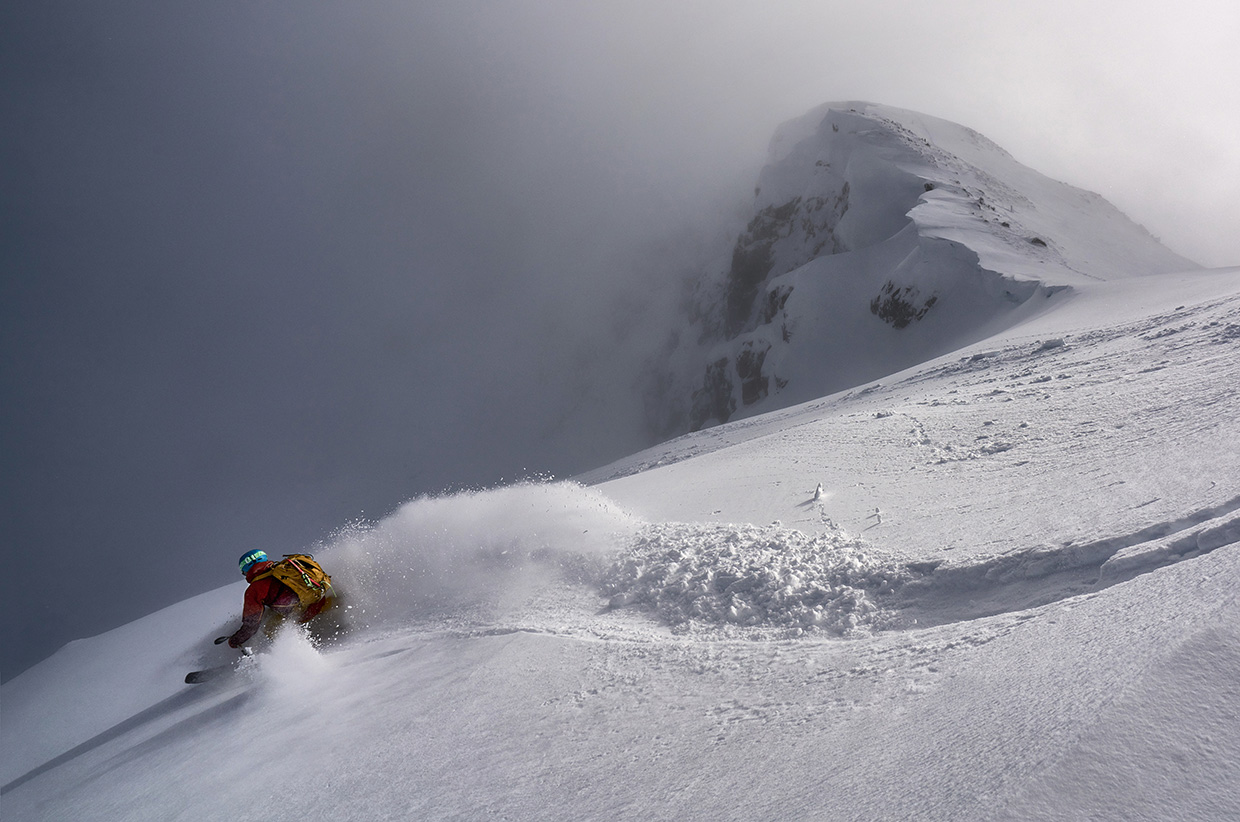 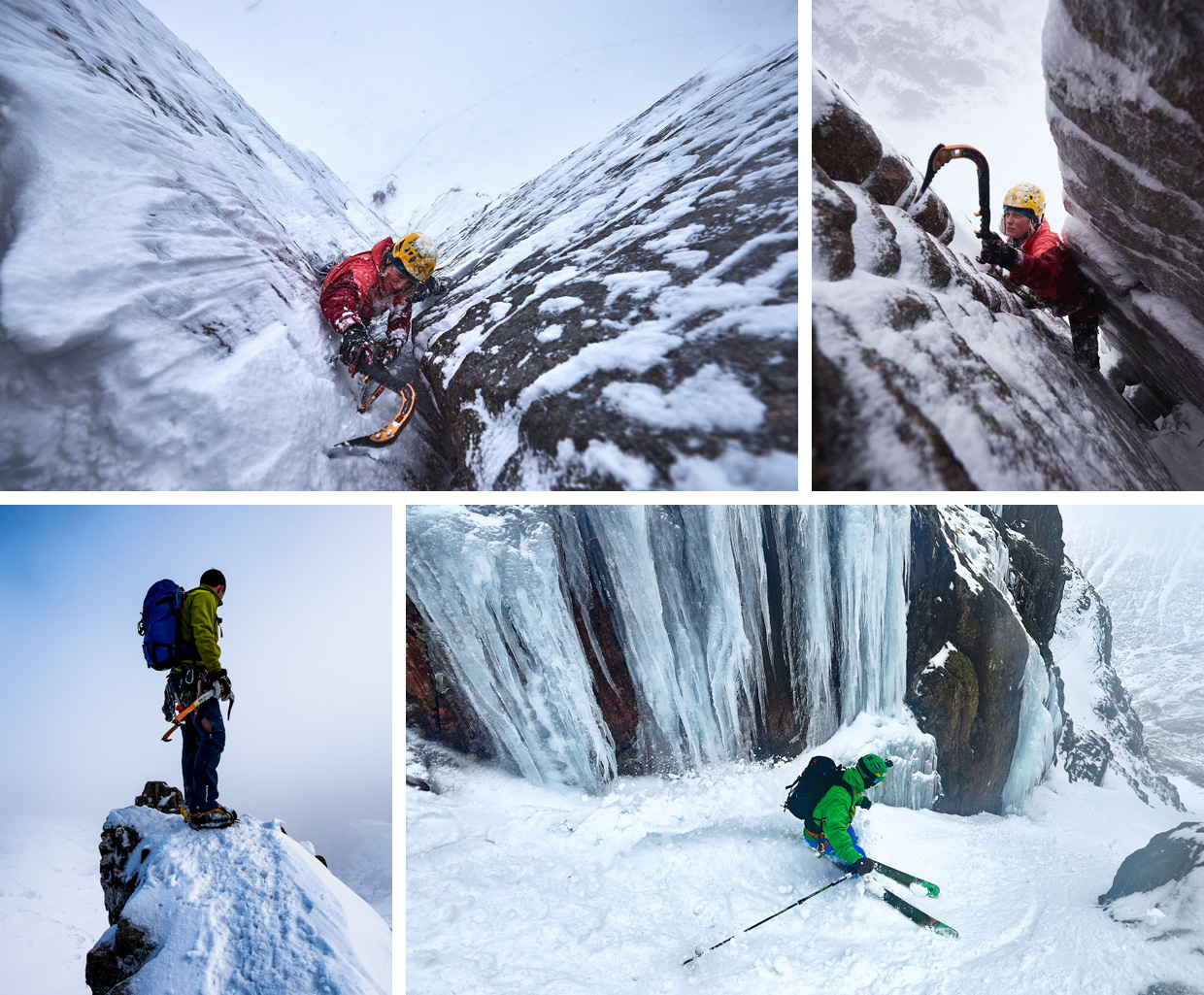 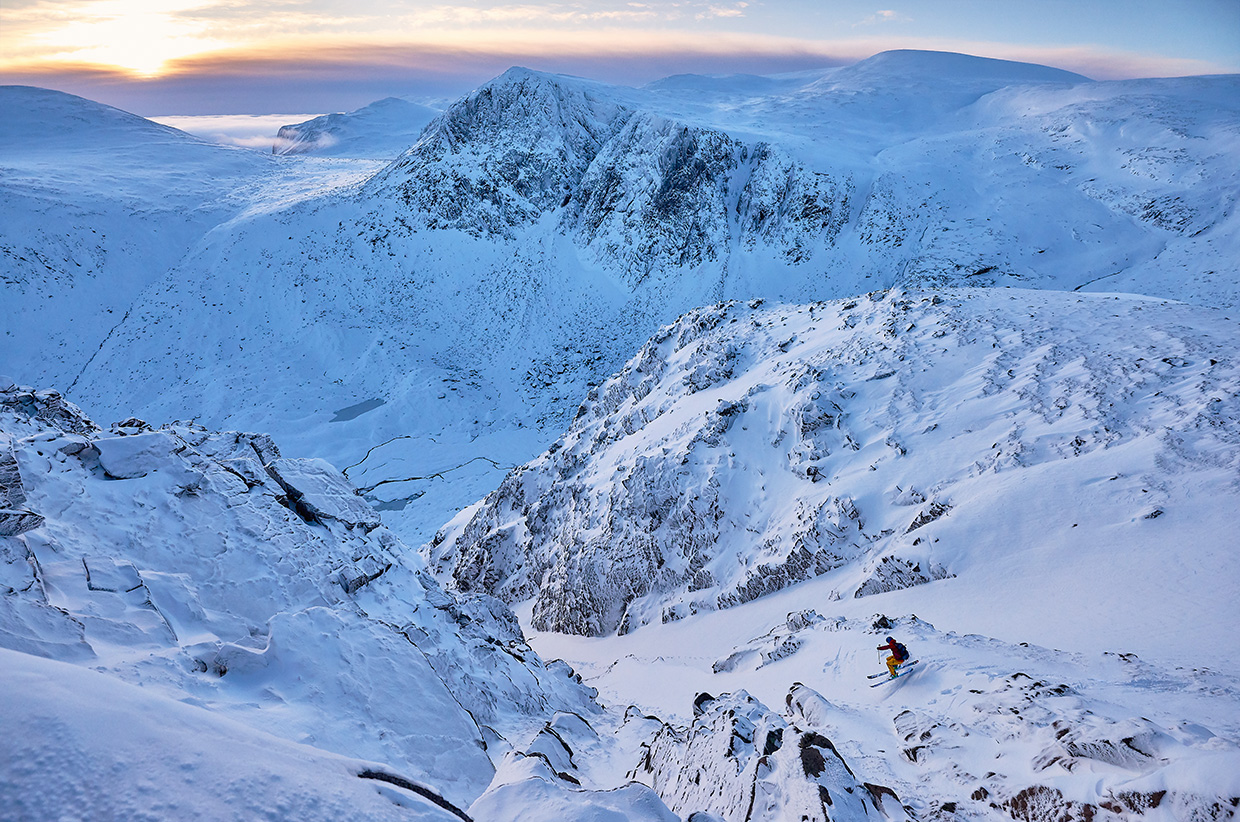 How do you plan for your shots? And how do you know what’s going to make for a good shot?
I spend a lot of time looking at forecasts, weather charts, webcams etc, trying to keep tabs on snow accumulations and freezing levels, and generally trying to build up an overall picture of what conditions are doing across the Highlands. I’ve got a list of locations and shots that I’m keen to try and capture in Scotland, but some of them require specific conditions. It’s a case of being flexible and ready to move quickly as soon as the conditions become good enough.

How do you ensure that you stay safe when you’re out by yourself?
Most of the time I will have company for most of the day, but you have to rein in your risk level if you’re on your own. If you get into trouble or something goes wrong, then you haven’t got anyone to help you out of that situation, so you have to take more care and be more cautious.

There is a lot of chat around the idea that when people are being filmed or photographed doing their sport, they go harder and take fewer precautions, wanting to catch those amazing moments on camera. In your experience photographing athletes, do you think that’s true? Have you noticed athletes ‘overperforming’ for the camera?
Good question, and it’s something I think about a lot. I’m pretty clear with athletes that I don’t want them taking unnecessary risks just to make a good shot, and this is why I usually prefer working with people I have a relationship with and trust to stay within their own acceptable risk levels. I think it’s an impossible thing to get away from though. When you point a camera at someone then there’s a reasonable chance that it’ll have some impact on their behaviour. I make a point of regularly reminding people whilst out on shoots to not go doing anything they might end up regretting!

Do you think the camera has an impact on your experience in the mountains more generally?
Of course. Half the time I’m out in the mountains now I’m working on a shoot, so I’m focused on capturing exciting images and doing my job, rather than perhaps appreciating the experience as much as I could be. It does make me appreciate the days I have out when I’m not working, though, and can just enjoy the experience more, without having to worry about taking photos (although I’ll always carry a camera with me). 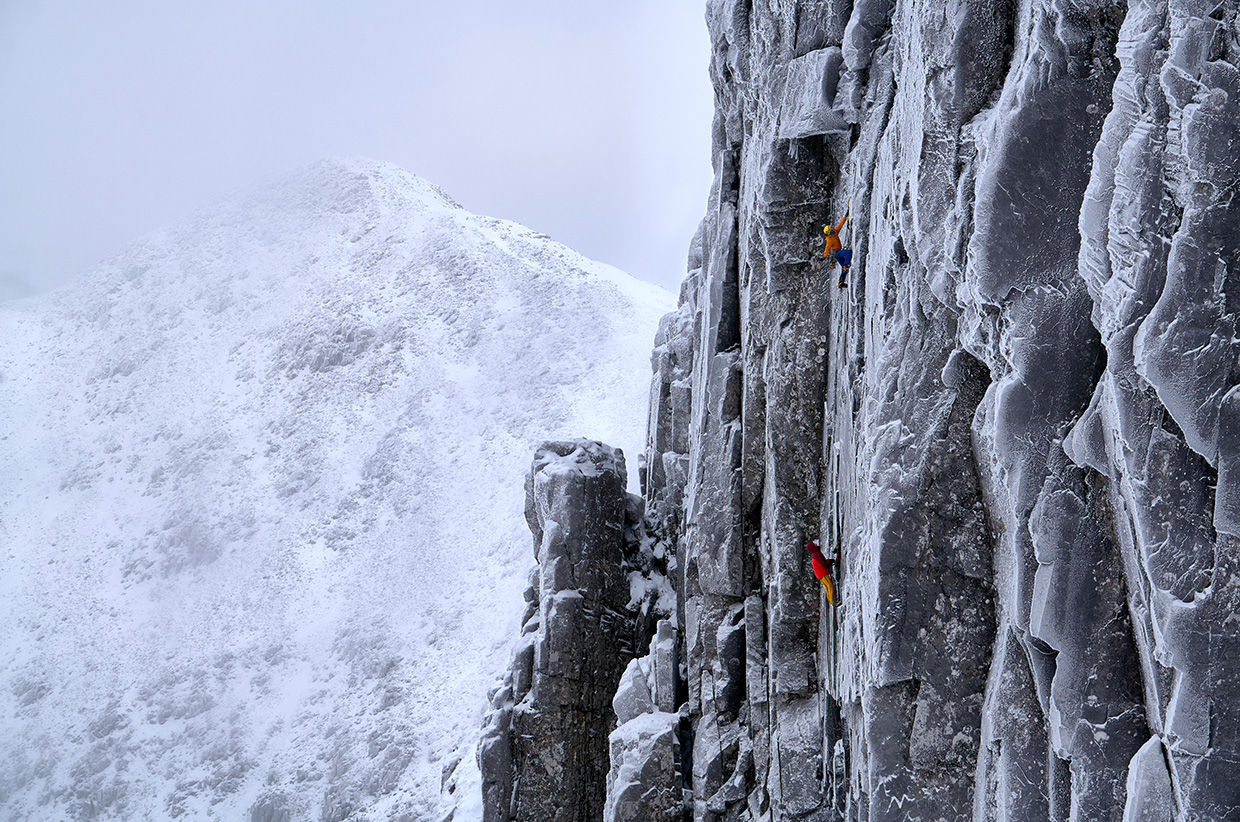 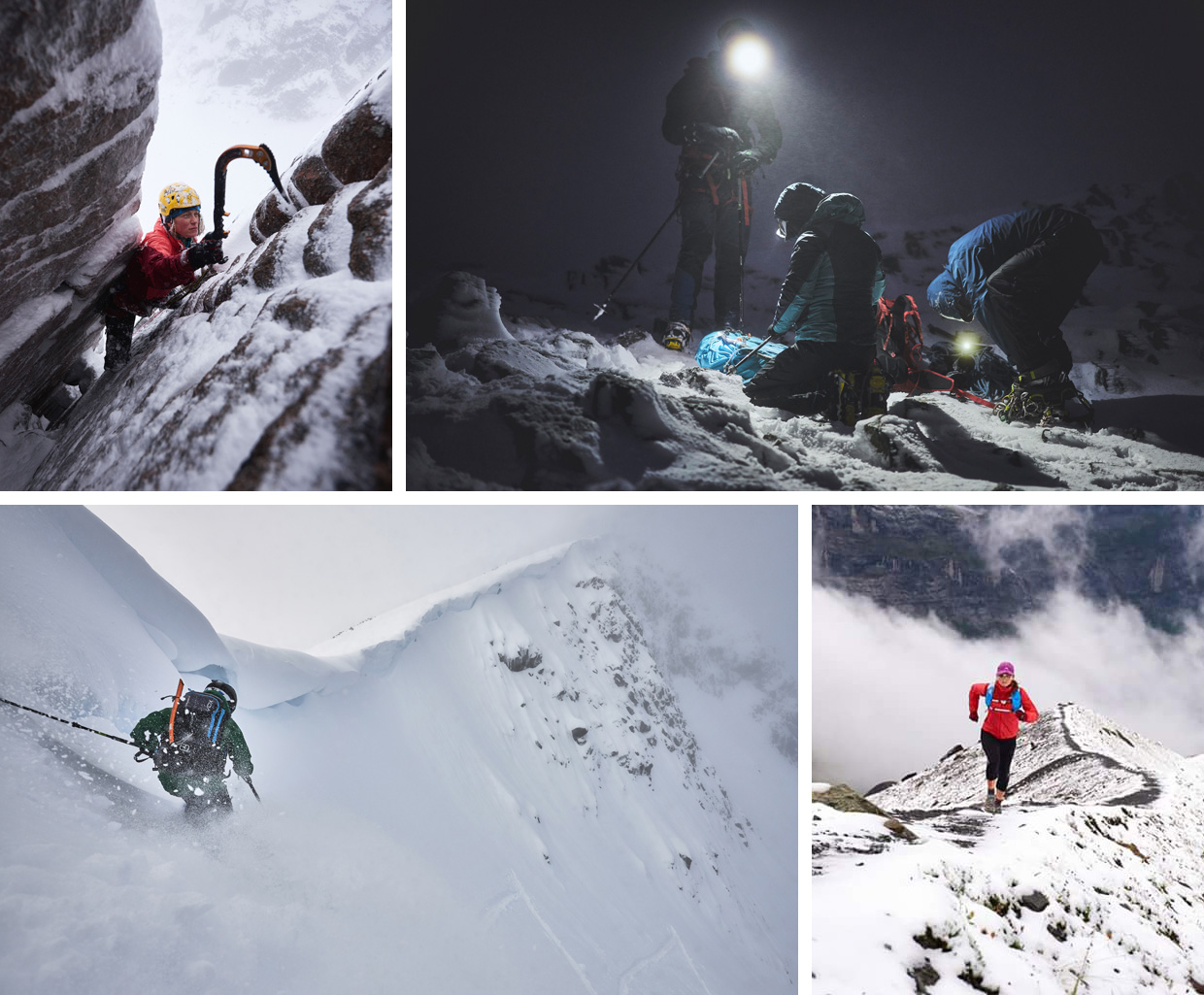 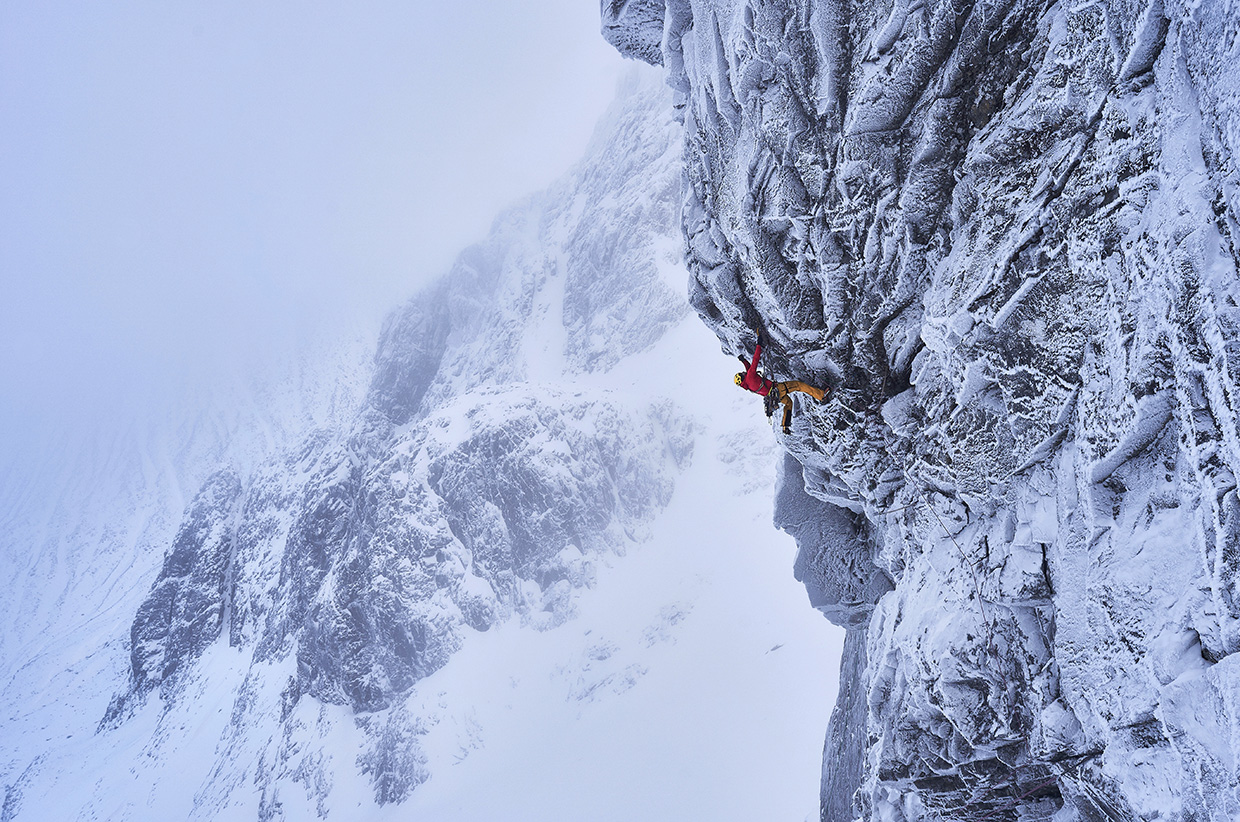 One of your photographs – the incredible shot of Greg Boswell and Guy Robertson climbing on Bidean nam Bian (pictured above) – was nominated for the Red Bull Illume Award, which is an amazing achievement. Can you talk us through that photograph?
Guy and Greg had invited me along to get some photos of them trying a new winter route on Bidean nam Bian. They’d been casually vague about their objectives for the day: ‘We’ve got some unfinished business on Bidean nam Bian. Get you at the car park at 5.30am!’ It’s nice to be able to do a bit of planning before photographing a climb, but I also enjoy the challenge of having to improvise on the hill. Reaching the foot of the imposing Church Door Buttress just before first light, their ‘unfinished business’ became apparent – the summer line Lost Arrow Direct, an impossibly steep series of cracks and roofs leading up the cliff.

The weather that day had been poor for photos. However, I knew that if the clouds were to clear slightly, then the west face of Stob Coire nan Lochan might come into view in the background. I waited patiently for a few hours and, sure enough, just as Guy was making good progress on the third pitch, the clouds broke momentarily and I was able to get the shot I’d hoped for. Four hours later, Guy completed a sequence of Grade 10 moves (in the dark!) to pull through a final roof section and top out on the route.

Moving forwards from this incredible achievement, how would you like to progress your photography in the future?
I’m generally more interested in storytelling through photography, so I’m working on trying to improve that side of things. However, having just come back from the Red Bull Illume Awards, it was inspiring to see the work other finalists put into conceptualising and crafting a perfect action sports image, so I’ll definitely take something away from that.

And finally, you’ve mentioned that Scotland is the one place you’d always come back to for exploring. What’s the appeal?
Of all the places I’ve worked, Scotland holds a unique appeal for me. A good adventure photo should make you, as the viewer, either want to be there, or want to be anywhere but there. During the winter months, the Scottish Highlands provide ample opportunities to capture either of these sentiments in an image. Although the mountains aren’t nearly as big as in other parts of the world, what they lack in size they more than make up for in wildness and seriousness. I will never be able to stay away!

To read more about Hamish’s experiences exploring the Highlands, click here.
You can see more of Hamish’s work via his website: hamishfrost.com and on Instagram @hamishfrost