02.56 set, 02.58 set and 03.00 set. The alarms were overkill but I wasn’t going to take any chances missing documenting a team of highliners rigging up the highest-altitude highline in the UK. The previous record was done by the same team on the up Sgurr Alasdair at 976m on the Isle of Skye. Today was all about Ben Nevis.

You may have seen slackliners in the park, rigging up a length of webbing between two trees then attempting to walk along it. Sometimes you’ll even spot them tricking on the line – surfing, backflips, bouncing up and down. This is usually done a few feet off the ground, but some want to take it higher. A lot higher.

Highlining is taking a slackline and rigging it up high, using a harness and safety leash. This is often done in the mountains but also in urban areas between buildings. 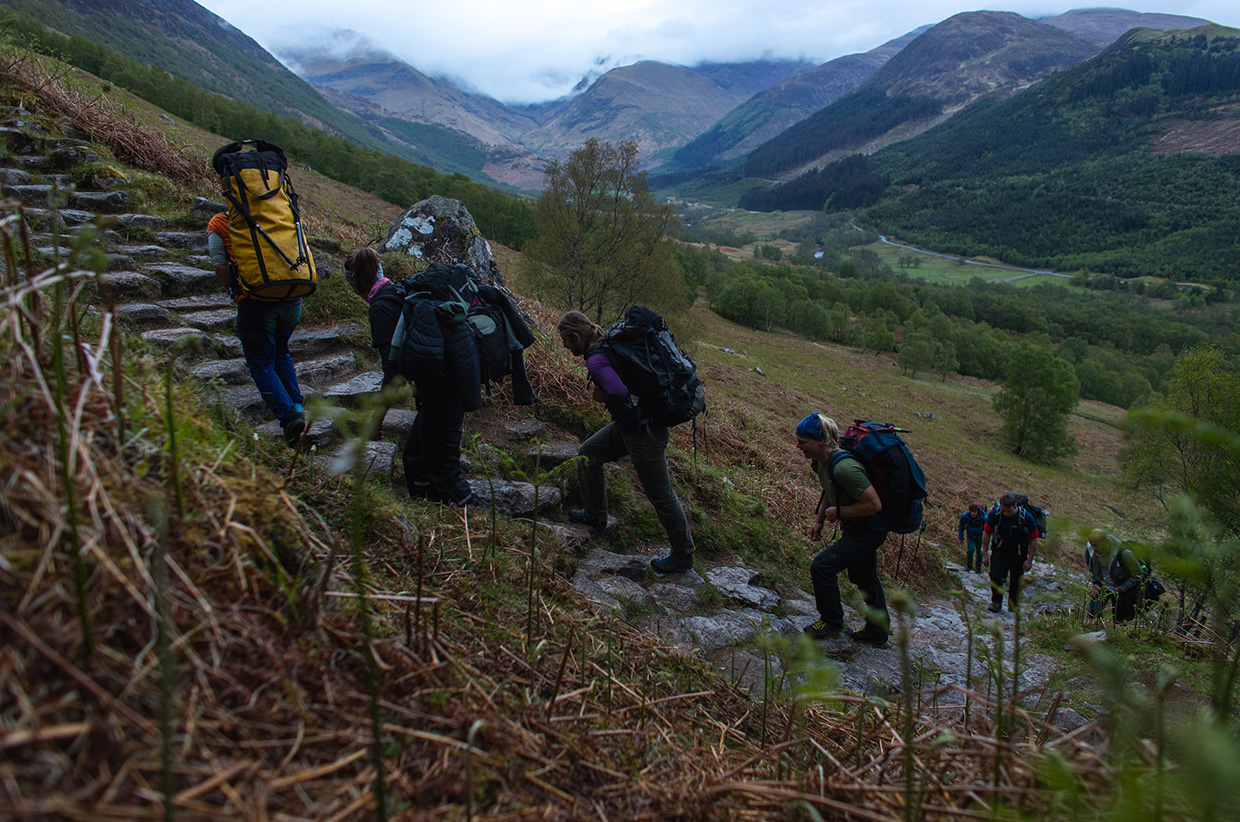 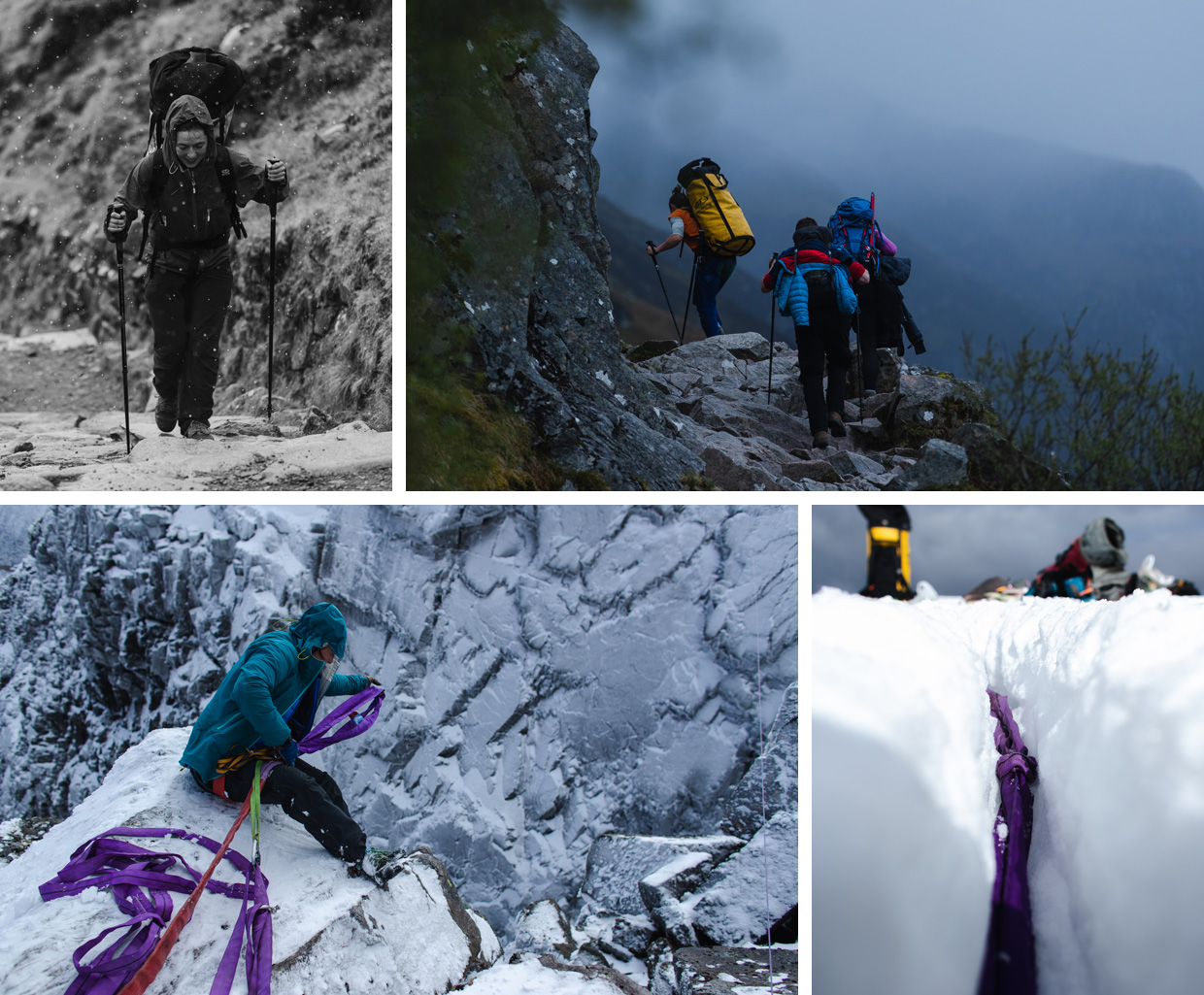 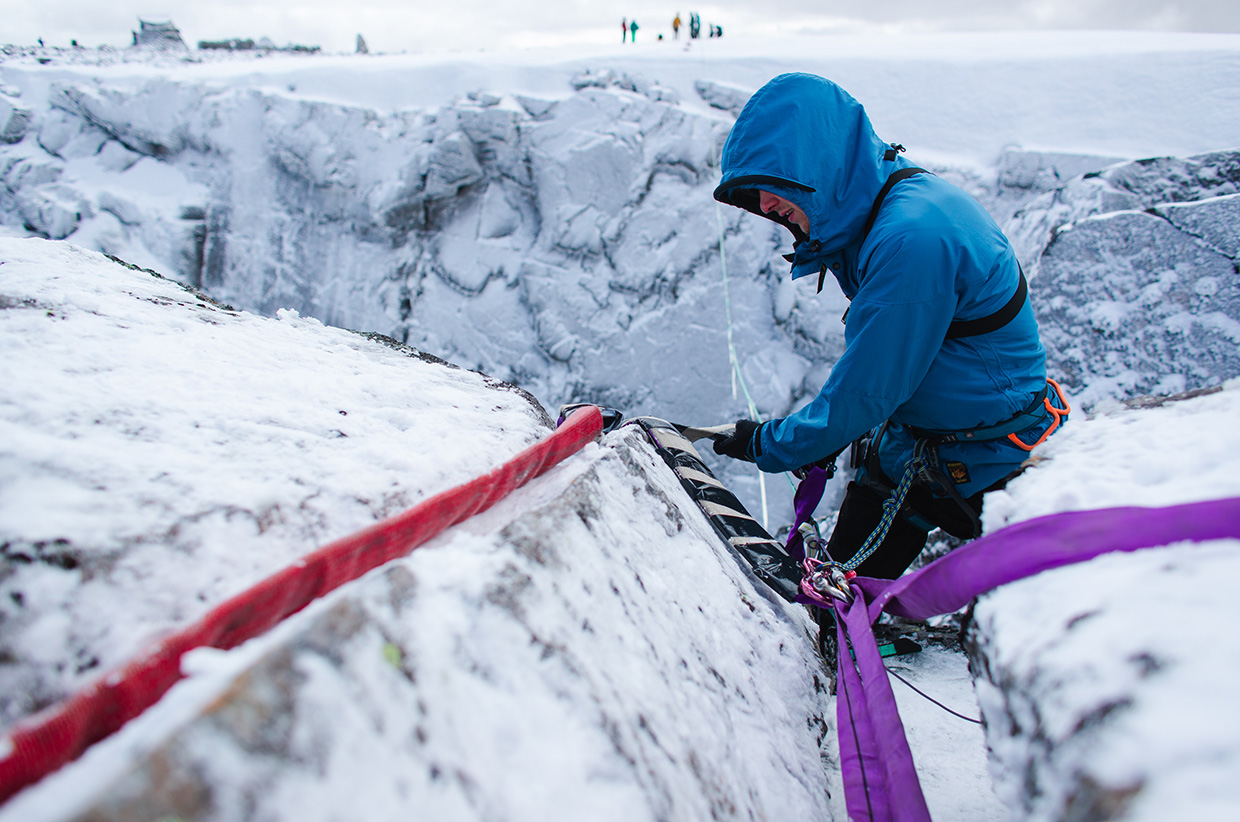 I’d taken an interest in slacklining, but was fascinated with the idea of highlining and began to research where in the UK this took place. The community is small and hard to find but the name Sarah Rixham had cropped up in an interview. On learning that she previously held the female record for the longest highline walk at 122m, I knew I’d found the right person. After a few emails back and forth she mentioned that she and a few other highliners were heading to Scotland and asked if I would be interested in documenting it. Of course I was!

Having barely slept, I made way my to Fort William and met up with the team consisting of Sarah, Tom Parker, Jack Chandler, Augustin Moinat, Thibaut Simon, Tania Monier, Rosanna French, and Brodie Scott. I found them finishing off their car-park breakfasts and double-checking they had all their kit packed. I realised they were eager to get going after Sarah said, ‘Who’s not ready and why not?’. A few moments later and we set off up the highest mountain in the UK with eight members carrying the equipment load between them. Only a few hundred meters in, with the first rocky steps underfoot, everyone realised they need to shed a few layers. Only 1,340m to go.

The hike up was tedious as we rose above Glen Nevis’s vibrant green walls into the clouds, through the rain and into the flurries of snow. We made regular stops on the way up, but the footpath became laden in snow, which attempted to slow us down. With the excited anticipation of rigging up the line, the pace was kept up and we started to see the cairns, indicating the summit was near. As we approached the top, hands were raised at completing the first task. Now it was time to rig the line. 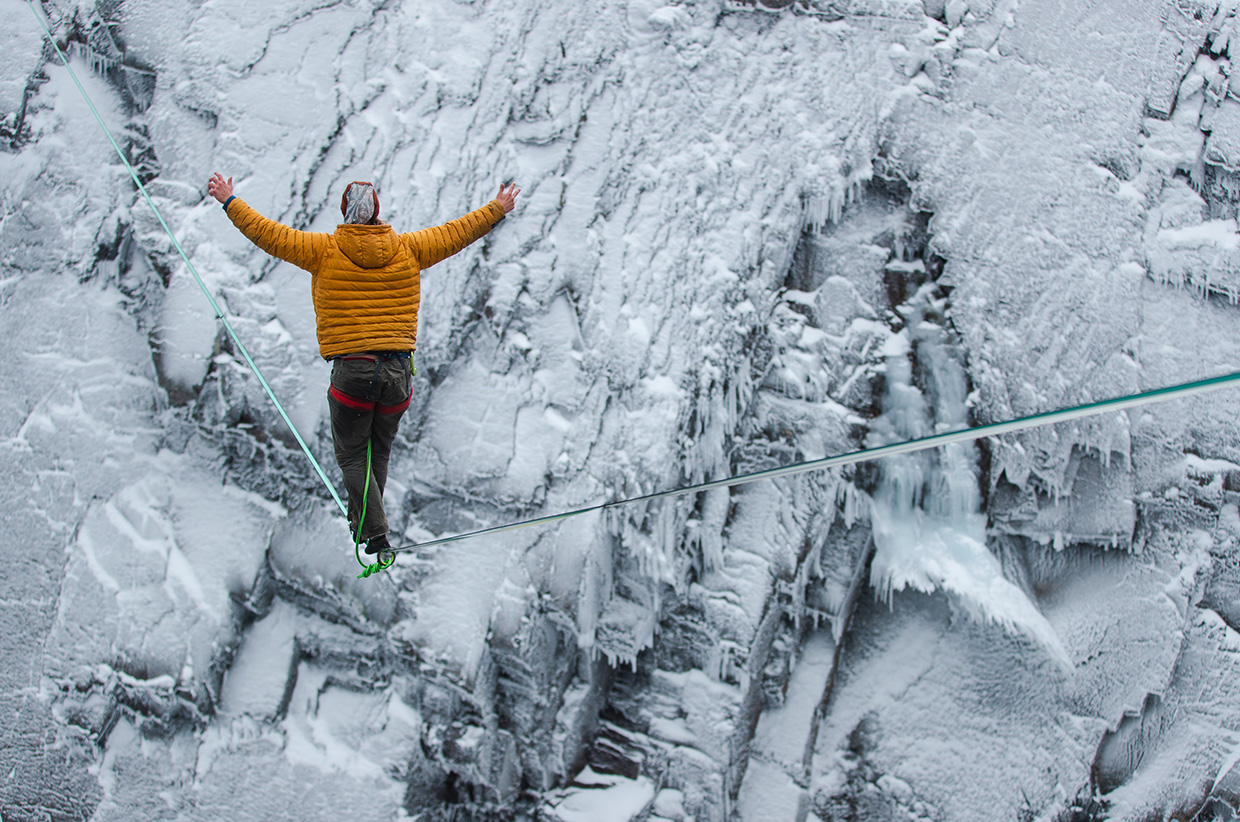 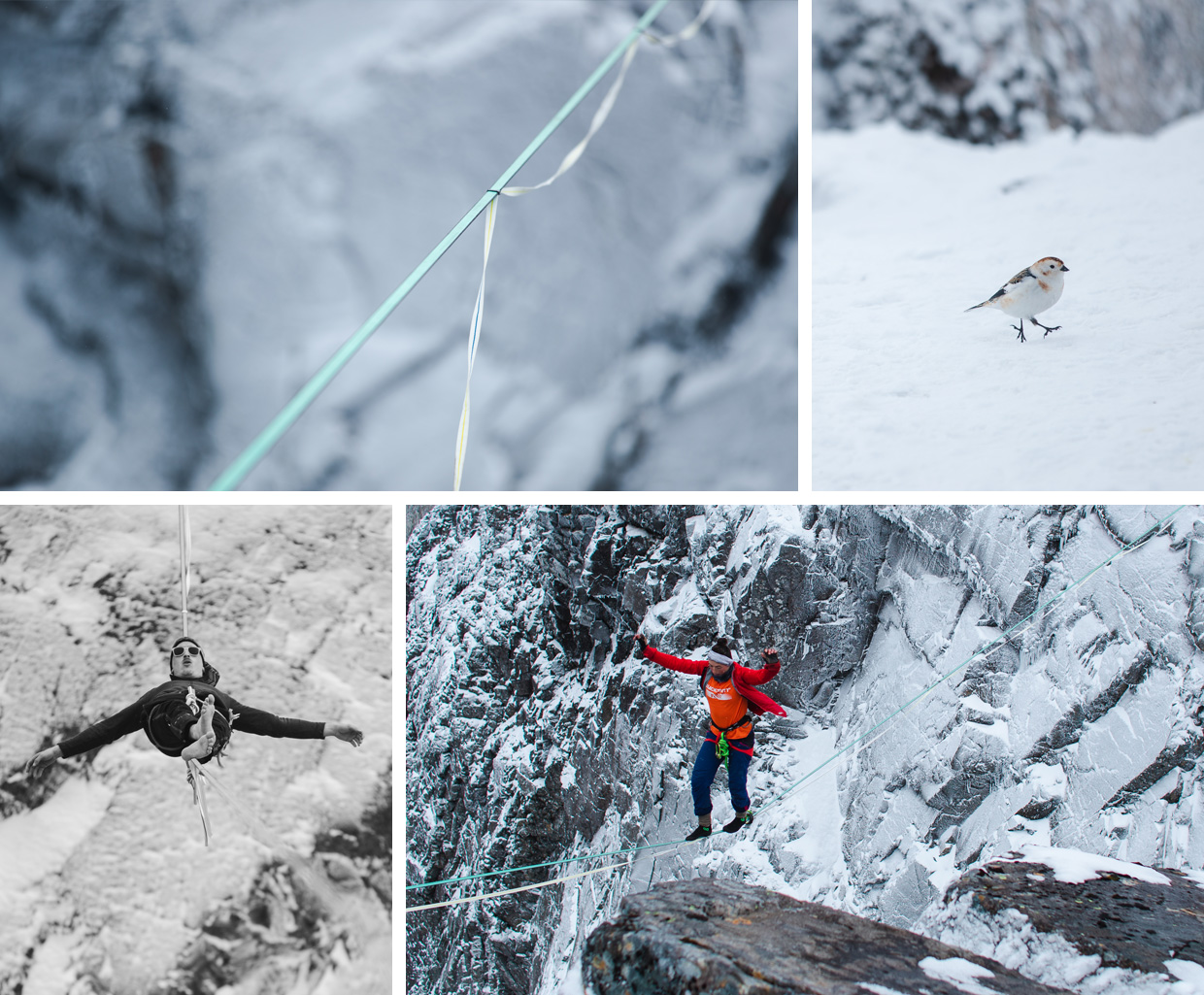 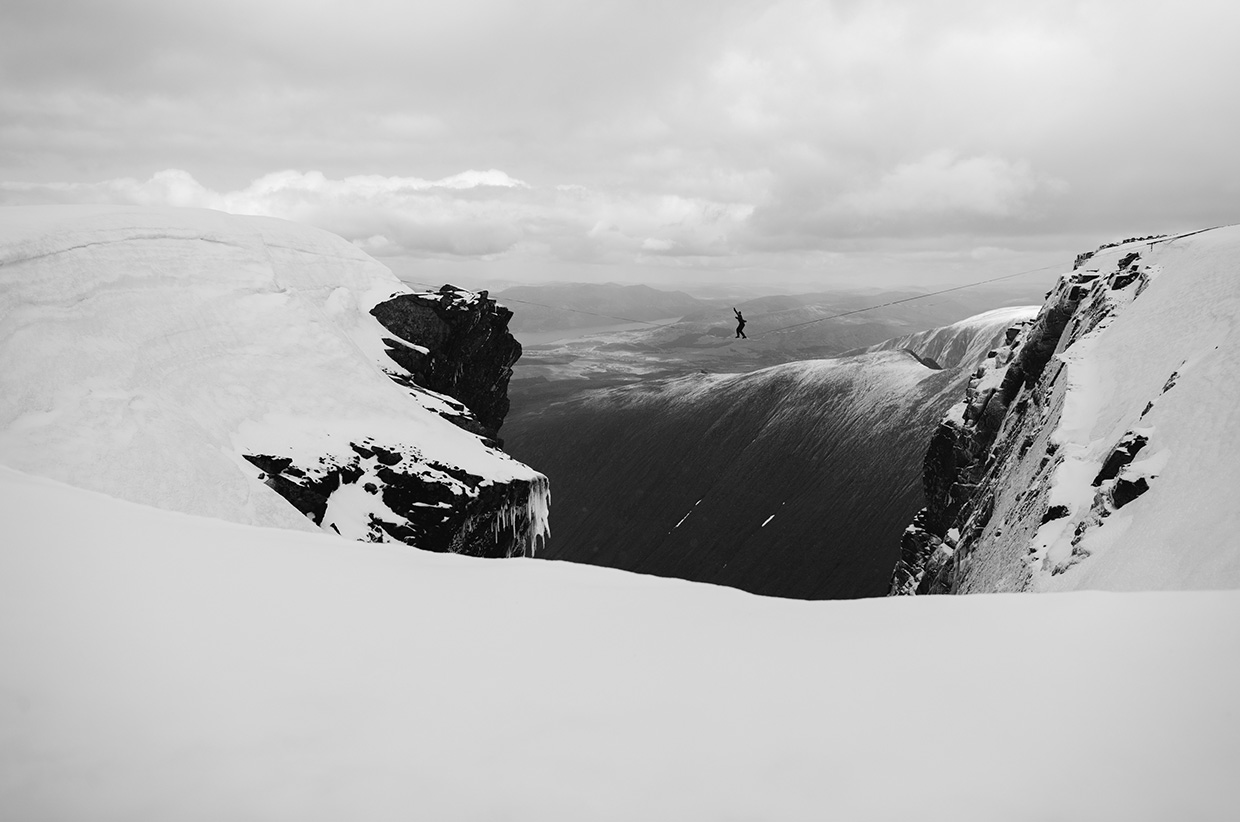 The line was to be 46m across Gardyloo Gully with a rock anchor using spansets (industrial rigging slings) with a breaking strength of 7 tonnes. On the other side there were no rocks so the team made their first snow anchor. For this, they hammered in metal stakes which are usually used in the ground. They then dug a 1ft-deep trench into the snow in the shape of a ‘C’ for the spanset to hug around. Both of the anchoring points had two independent anchors, so if the main anchor were to fail, the backup is there. Once this was all rigged up, a small rope was walked around to one side and then the mainline and backup line were pulled over and attached.

Watching this two-hour process was confusing but also fascinating. The team would question each other politely and always ensure everyone was happy with what was going on. Safety was a priority and suggestions were given serious consideration.

Three of the team had come up two days before to recce the line, and after summiting the mountain again (with gear), rigging the line and working out a snow anchor, it was time to get walking. After a quick game of rock-paper-scissors eliminator to decide who would be first to walk, Tom was ready. I was safe, happy to be wedged between rocks, but I couldn’t help feeling nervous as Tom shuffled along the line to get in place. I’d seen plenty of highline videos but nothing prepares you for the scale of what’s going on like being there – it was at once intriguing, scary, and exciting. I was getting butterflies on solid ground so I could only assume he must have had a few hundred more fluttering inside of him. As he walked along the line, the wind dropped to nothing and there was no sound. The atmosphere was eerie with a long drop underfoot, dark clouds rolling in, and a frozen icefall on the rock face behind him. I was impressed – and there were still seven more waiting to walk the line. 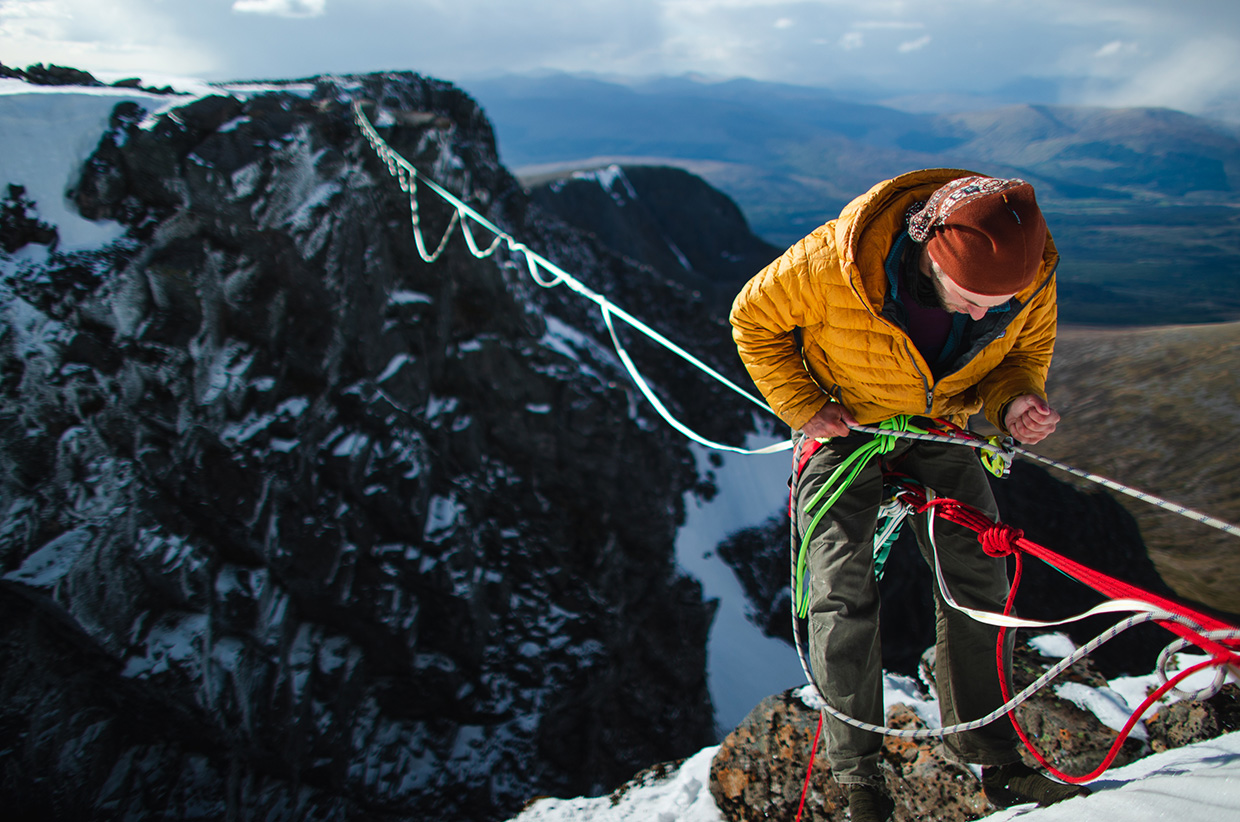 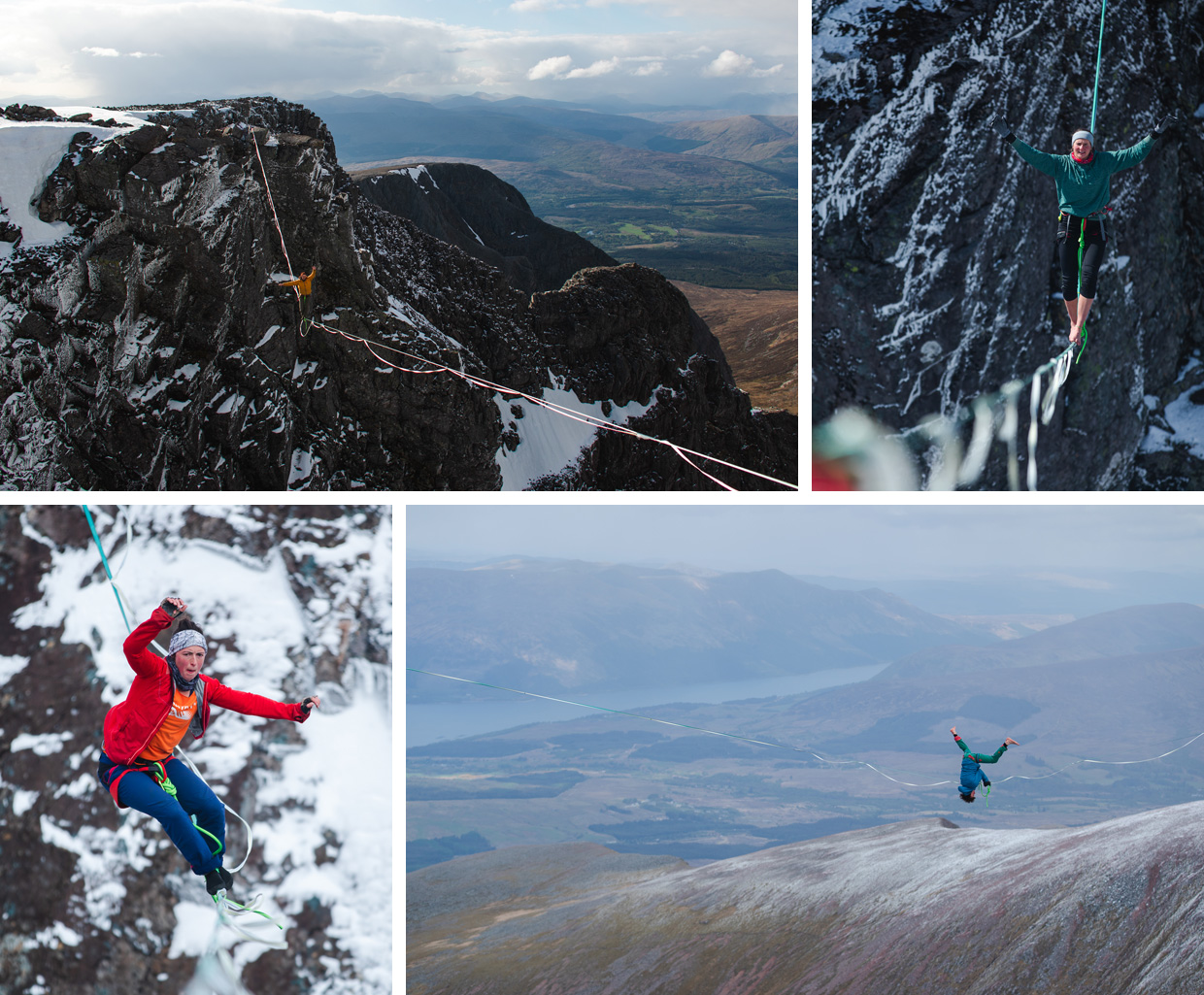 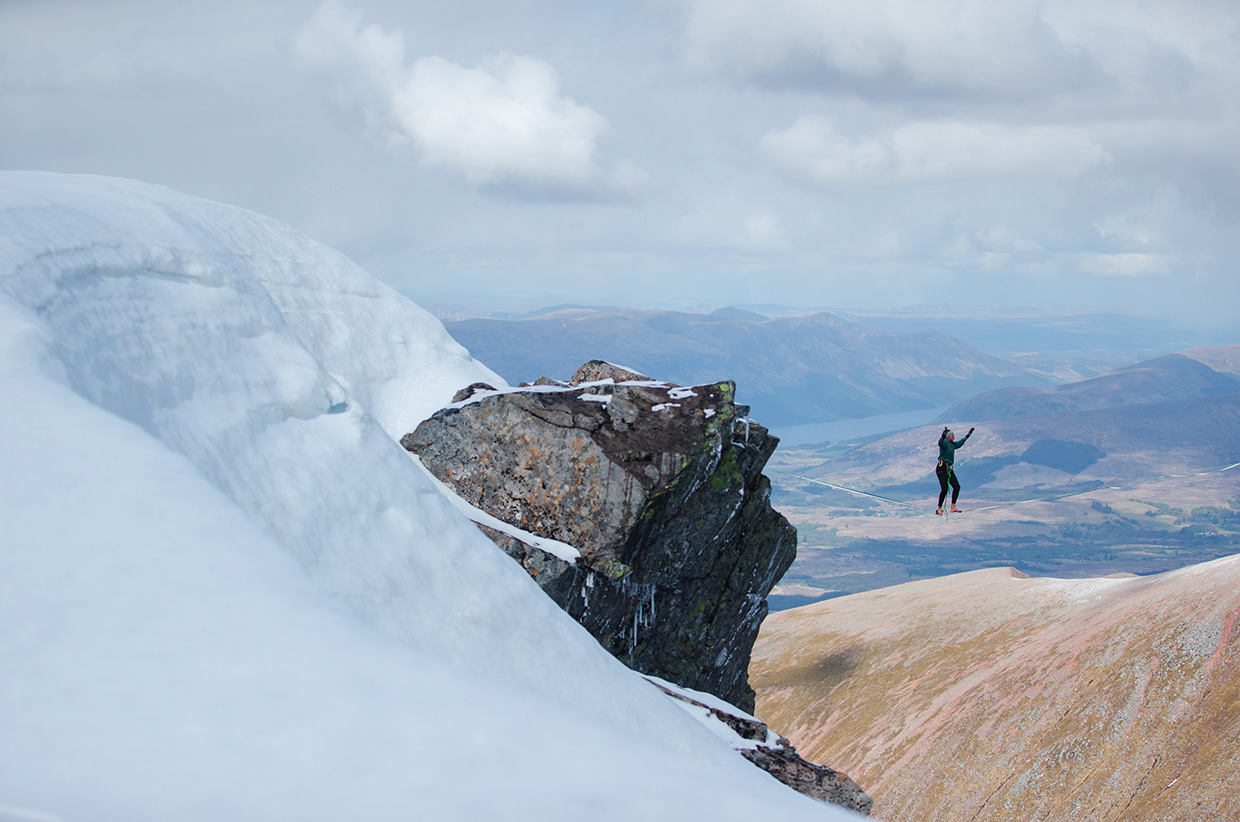 As everyone took a turn, I found it fascinating to witness the various balance techniques. Each person moved in a different way. When Brodie was on, his arms were out but his hands flapped loosely, as if there were no tension in his wrists; others’ arms would be stiffer or more upright. Some were barefoot while others wore thin shoes. No two people were the same and each had their own goal while on the line. Surfing began. Some would make the line swerve from side to side, Jack laid on his back with his arms out, and Sarah and Augustin were trying shoulder stands – all on a one-inch line. Of course, there were falls. When someone went down, there was a soft snap of the line, like an elastic band, and they tried to either catch the line or fall into their harness.

Throughout the day hikers would appear and be captivated when spotting a silhouette floating: ‘What the hell are they doing?’, ‘I’ve done a lot in my life but this is bravery’, ‘Are they going to walk on that?’ and ‘The line looks a bit loose’. But crowds didn’t put the highliners off, and they were happy to explain what was going on. Some onlookers remained unconvinced by what they were witnessing.

As they took down the line, I was happy for them and loved watching the delight in each of them throughout the process. Tania had shouted while on the line, ‘I love this!’ and that summed up the feeling they all gave off. They had achieved their goal at 1,344m and, as they packed away the equipment, were already discussing plans for the next line at the end of the week.