Off Piste in the Peak 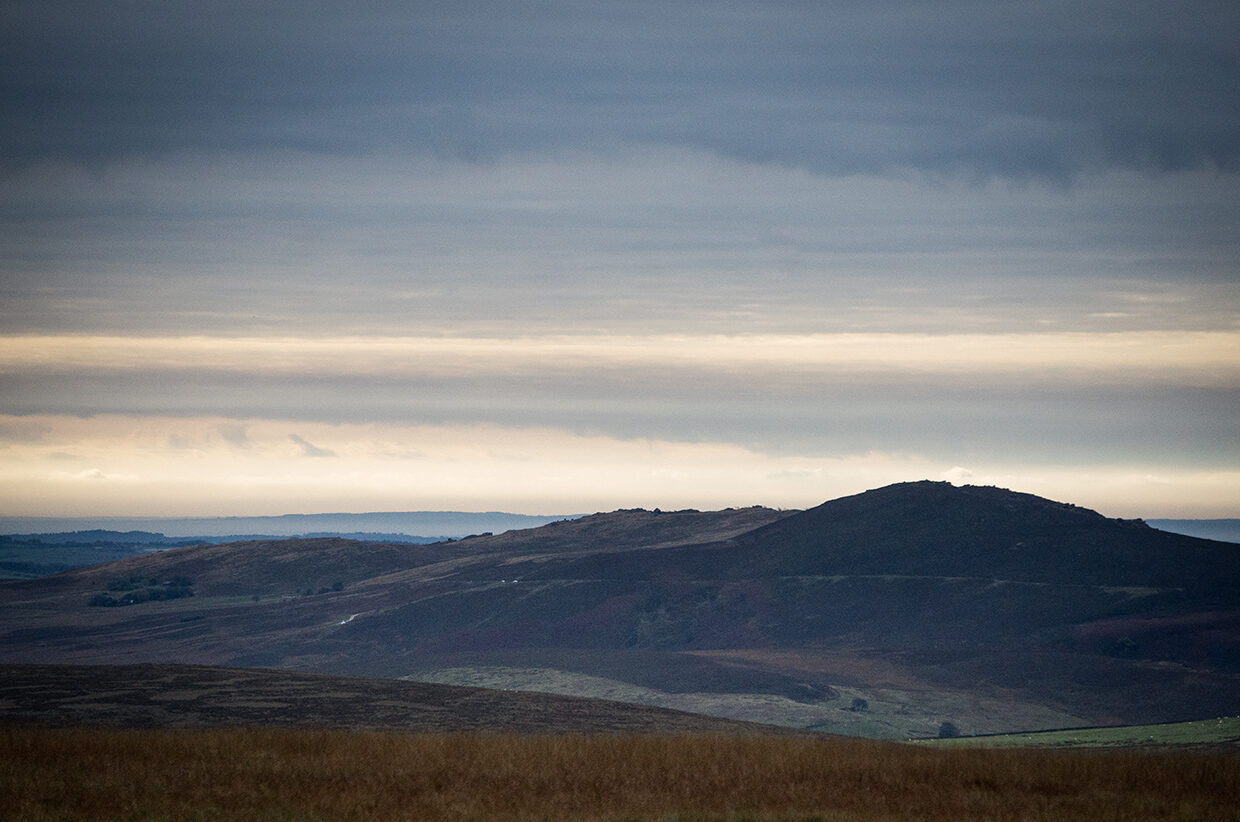 You don’t need gravel for a gravel bike to be the perfect tool for the job.

Our first glimpse of Manchester was from the top of the Cat and Fiddle climb (named after the eponymous inn at the top, the second highest in England). We had left tarmac behind and were splashing our way along a bridleway before pausing at a gate. Ahead, the trail descended gently to the south; behind was our eventual goal. The tall buildings of Manchester’s rapidly changing skyline stood like a wintering forest: slender leafless trunks in a mist-engulfed hollow.

Similar views repeatedly teased us along the 100km ‘Off Piste in the Peak – Gravel Bonanza’ course. Manchester would reappear at the top of each climb, always out of reach and never seeming any closer. Instead, we would navigate our way around the north-western edges of the Peak District for as long as possible, before green corridors of disused railways and canal towpaths carried us to within a few hundred metres of Piccadilly Station. It felt like a journey of youthful exploration, and a reminder of why I fell in love with riding in the first place as it gave me the tool to answer the burning questions of ‘I wonder what’s at the top of that hill?’ or ‘I wonder if I can join up here and here?’ or ‘Where does that trail go?’ Never contrived, but never direct, the route lived up to its off-piste tagline.

Organised by The Service Course – a bike shop that originally started in Girona, but has since opened stores in Nice, Oslo and, er, Wilmslow – the Gravel Bonanza route linked posh Cheshire suburbia with the metropolitan sprawl of the north’s largest city. The ‘gravel’ in the ride’s moniker was more a reflection of the bike of choice than the surfaces we rode; this part of the UK isn’t known for the sweeping, dusty, unpaved roads that are so often used to sell gravel as a concept. What it does have plenty of, though, are small lanes, ancient bridleways, and other forgotten thoroughfares. It is here that a gravel bike comes into its own, making efficient progress along tarmac, inducing an ear-to-ear grin jinking along small sections of singletrack, and (with a modicum of care) amply dealing with the rockier parts of the route. 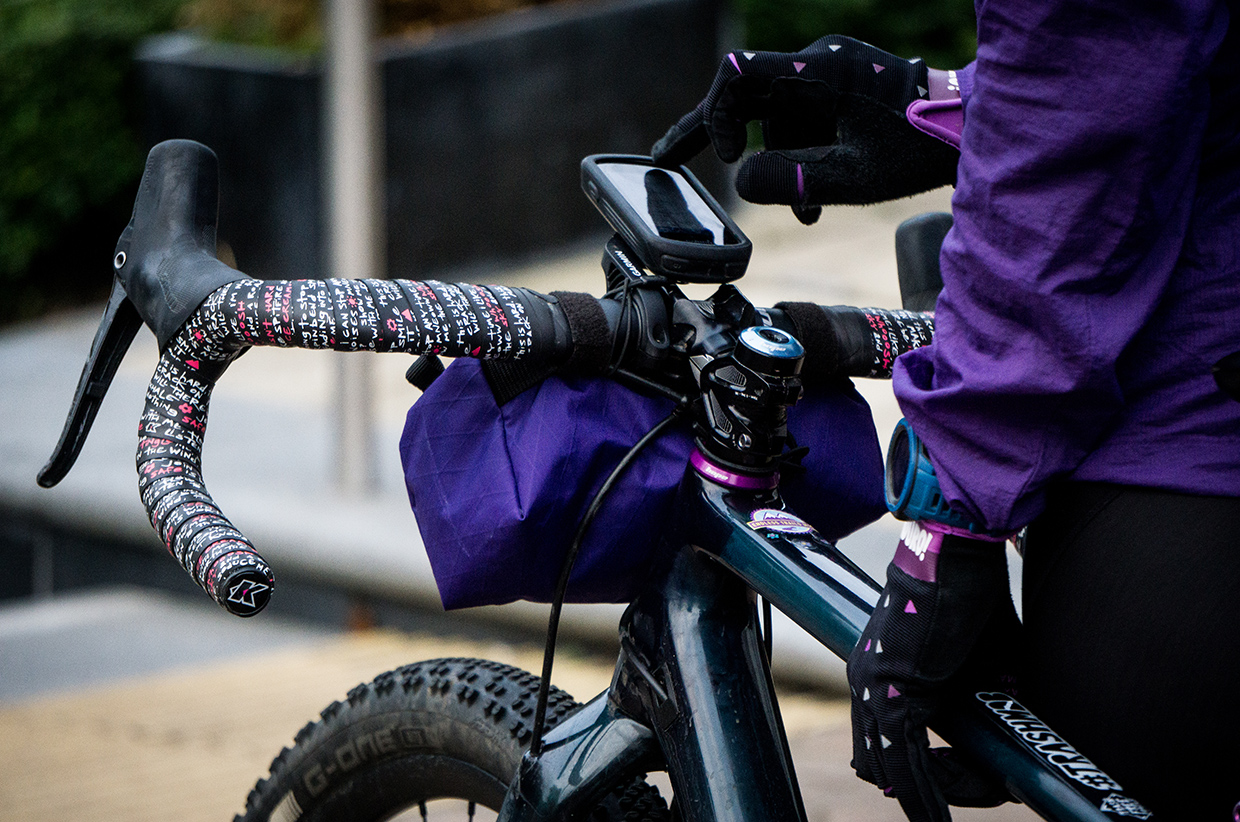 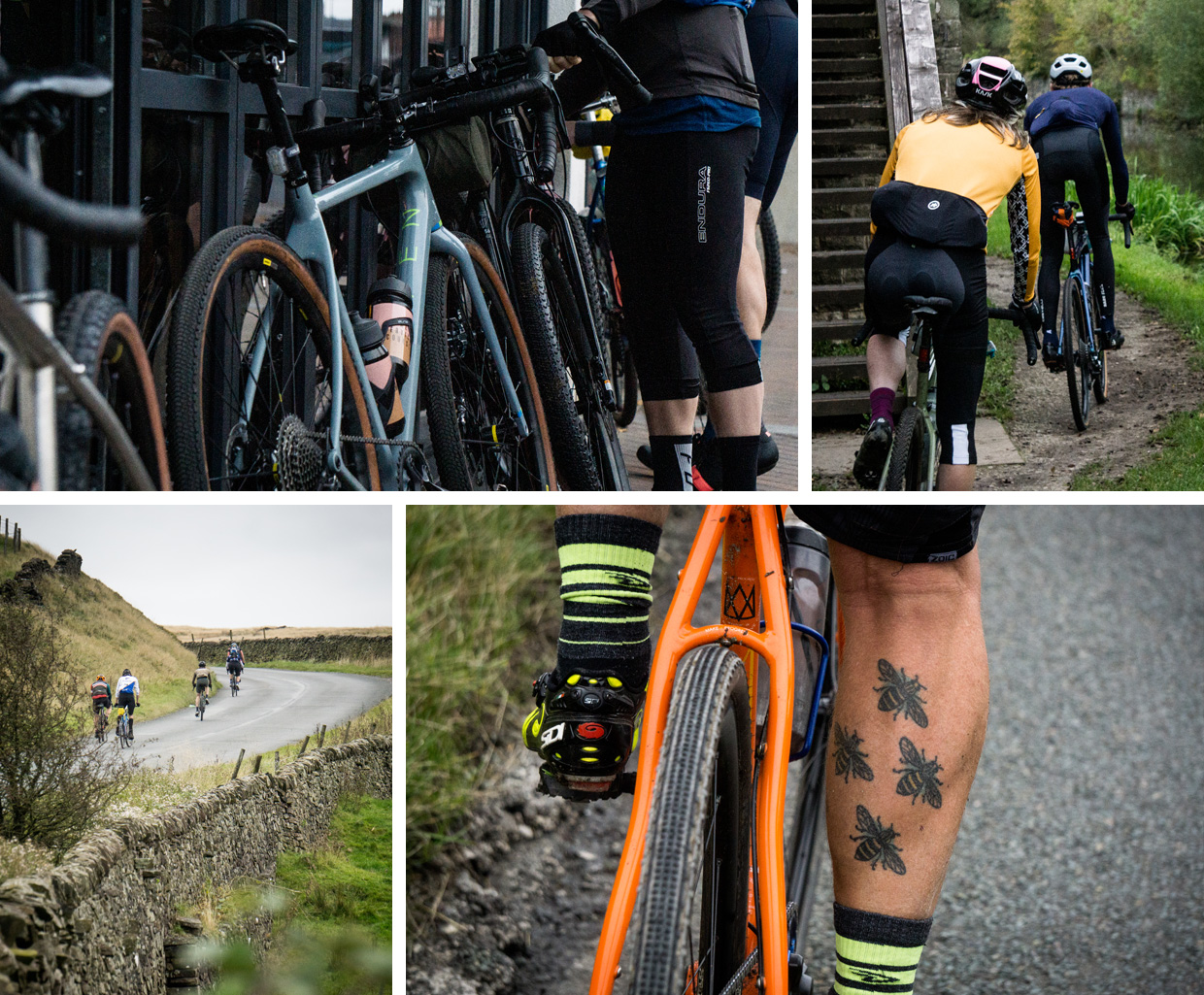 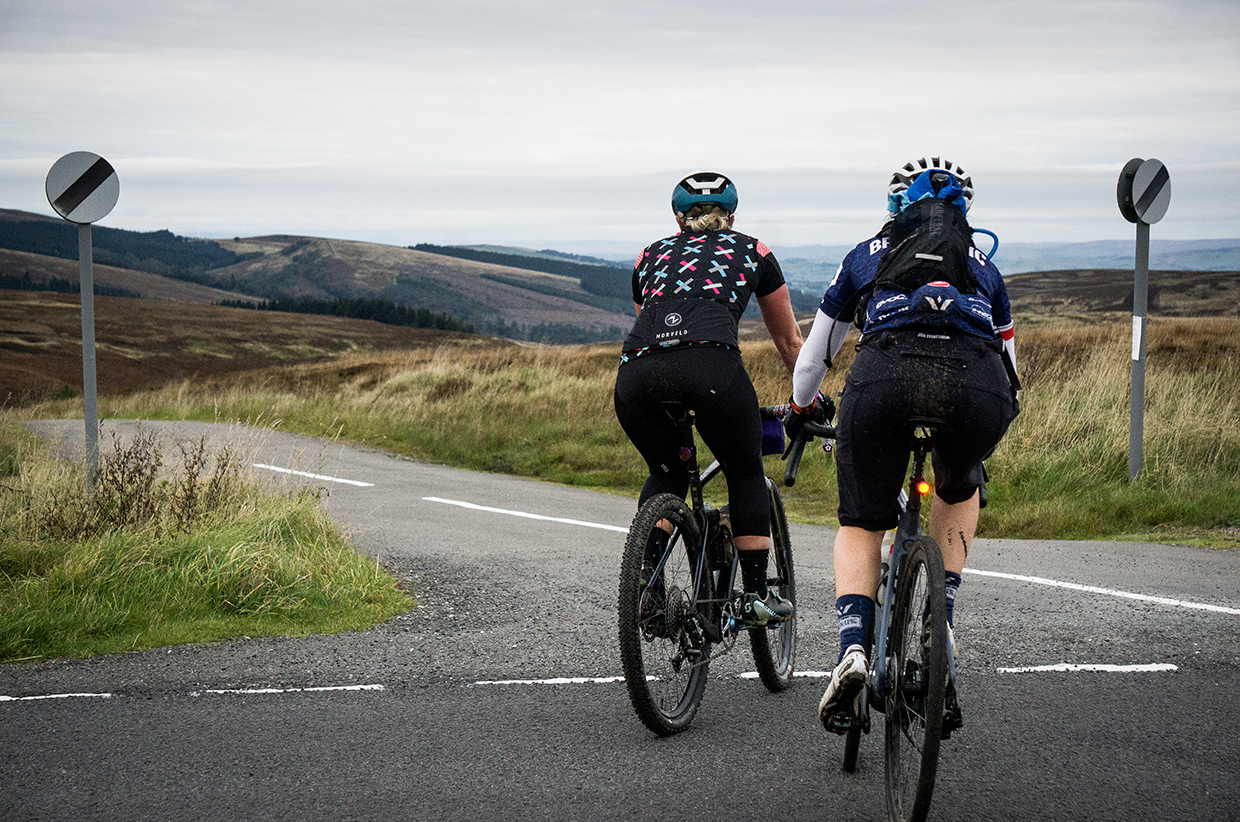 Over 100 riders signed up and left in small groups, suitably fuelled with espressos and croissants from The Service Course’s in-house coffee shop. We spent the day hopscotching each other; this was far from a race and all the better for it. Photo stops were plentiful. So were punctures, as even tubeless tyres succumbed to clumsy line choices (including my own somewhat optimistic ‘I’ll just bunnyhop over these spiky rocks’ insta-deflation).

We left rust-tinged leafy lanes for exposed moor, thankful for mild and dry weather, before descending to Buxton and navigating farm tracks and drystone-wall-lined byways to a welcome feedstop. Here, at the head of the majestic Goyt Valley, about two thirds in, cheese, apple, and nut-butter butties (thanks to Outdoor Provisions, who also used their local knowledge to plan the route) refilled empty tanks.

Zoom out on the route profile and it looks all downhill from here. Take the time to look a little closer and, well, maybe it would be best not to and just accept what was to come. Passing through the stately home grounds of Lyme Park afforded us our last view across the skyline of Manchester before a long descent and the home run, time trialling along the Middlewood Way and Trans Pennine Trail. 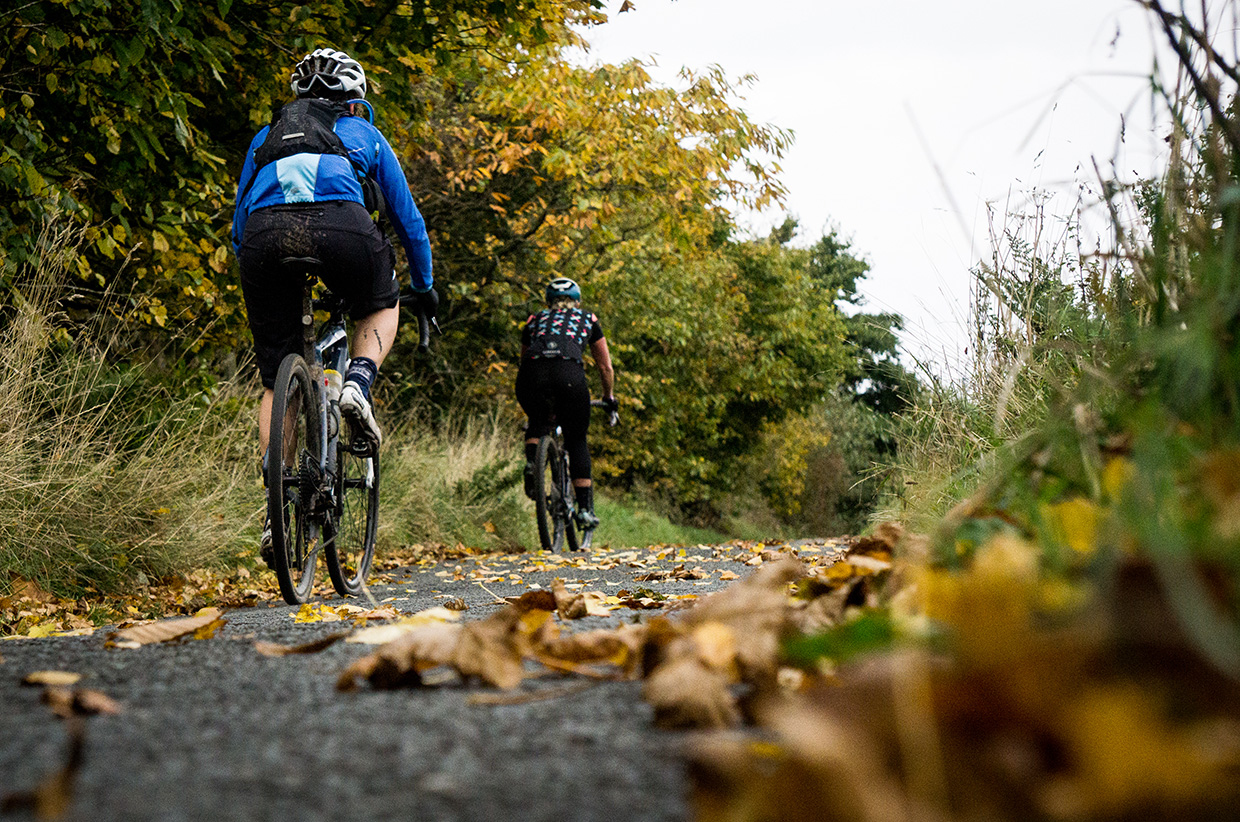 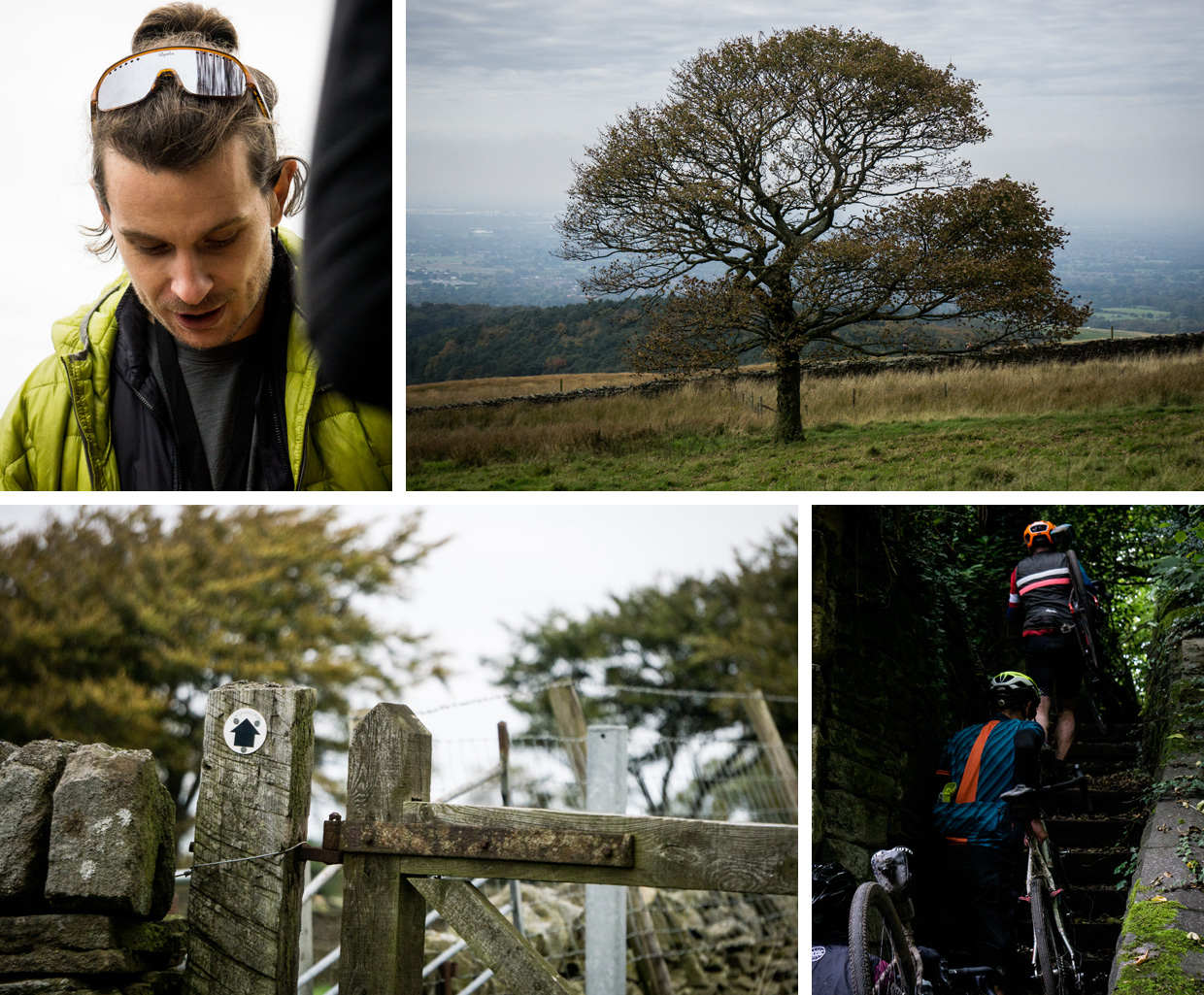 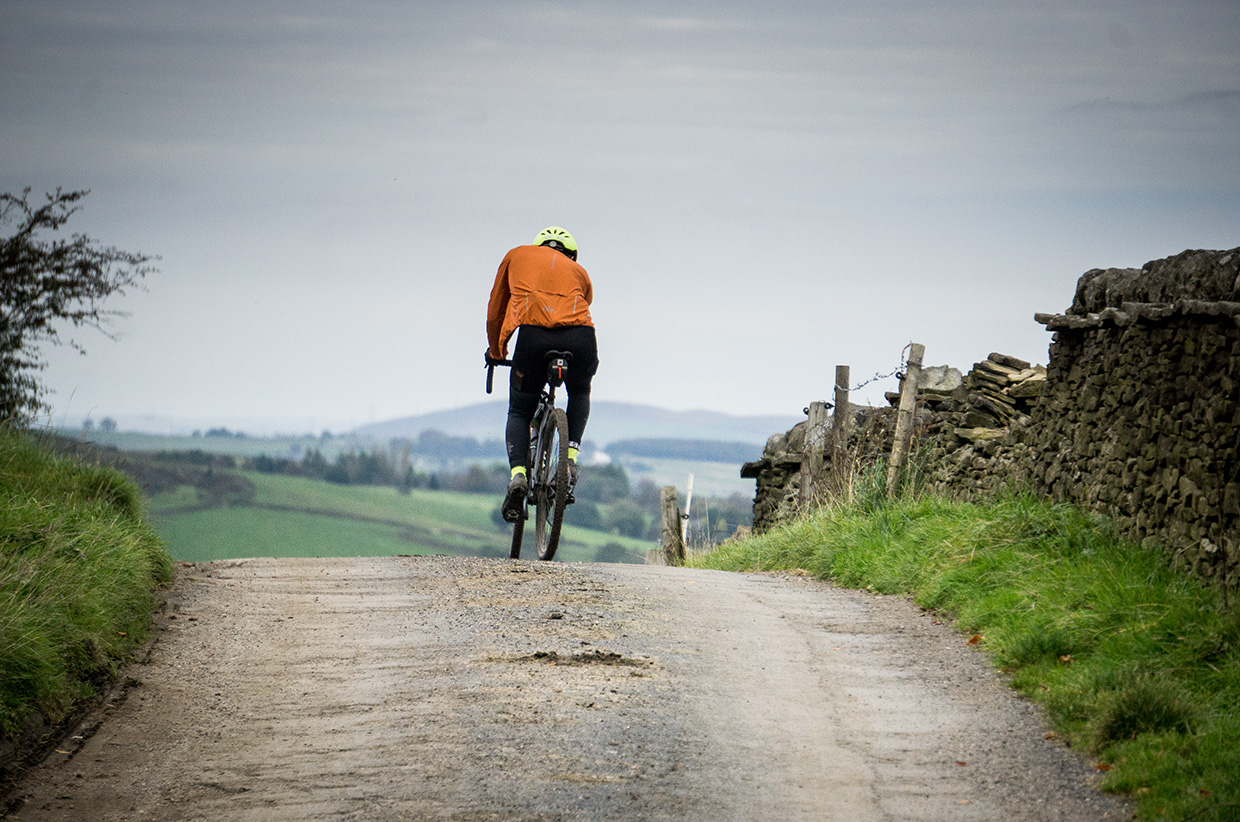 We bumped into Will as we joined the Aston Canal to deliver us into the city centre. I’d chatted to him along the first few kilometres as we spun our legs side by side. We separated somewhere, then he held a gate open for us shortly before that puncture saw him continue alone once more. Will is one of the brewers at Track Brewing – our final destination for the day – and he was on home ground as we passed under a bridge with ‘CYCLING’ emblazoned across it, and the Manchester Velodrome nearby. We followed his wheel instead of the GPS line for the last few turns, crossing wide roads with nose-to-nose traffic: two worlds overlapping yet never quite touching as we filtered through.

Early finishers sat cross-legged in small groups in the late-afternoon sun, raising their pints as another handful of riders rolled in. Excited, weary chat continued for hours until eventually the shadows of the high-rises cast over the yard – the creeping of a sundial acting as a reminder to many that they still needed to make their way home.

A few days later, and I sit writing this story, reflecting on a few hours turning pedals somewhere not so far from home. My bike stands in the cellar, still caked in grit, forlornly waiting for me to repair the damaged tyre. For me it’s a ride that will live longer than some. Not for the out-and-out quality of the terrain or the landscape – as well constructed as the route was, as lovely as the Goyt Valley is, I’ve been fortunate to ride in more spectacular locations – but as a reminder that a great ride doesn’t need much beyond a route, the right people to share it with, and the promise of a pint at the end. After a couple of years of enforced doorstep adventures, the other side of the Pennines from home delivered all that and more.

For details on the next Gravel Bonanza, visit theservicecourse.cc/gravel-bonanza-peaks

Thank you to The Service Course, Track Brewing, and Outdoor Provisions for organising the ride and inviting Sidetracked. The Service Course plan to run more gravel rides from all of their stores. Find out more at theservicecourse