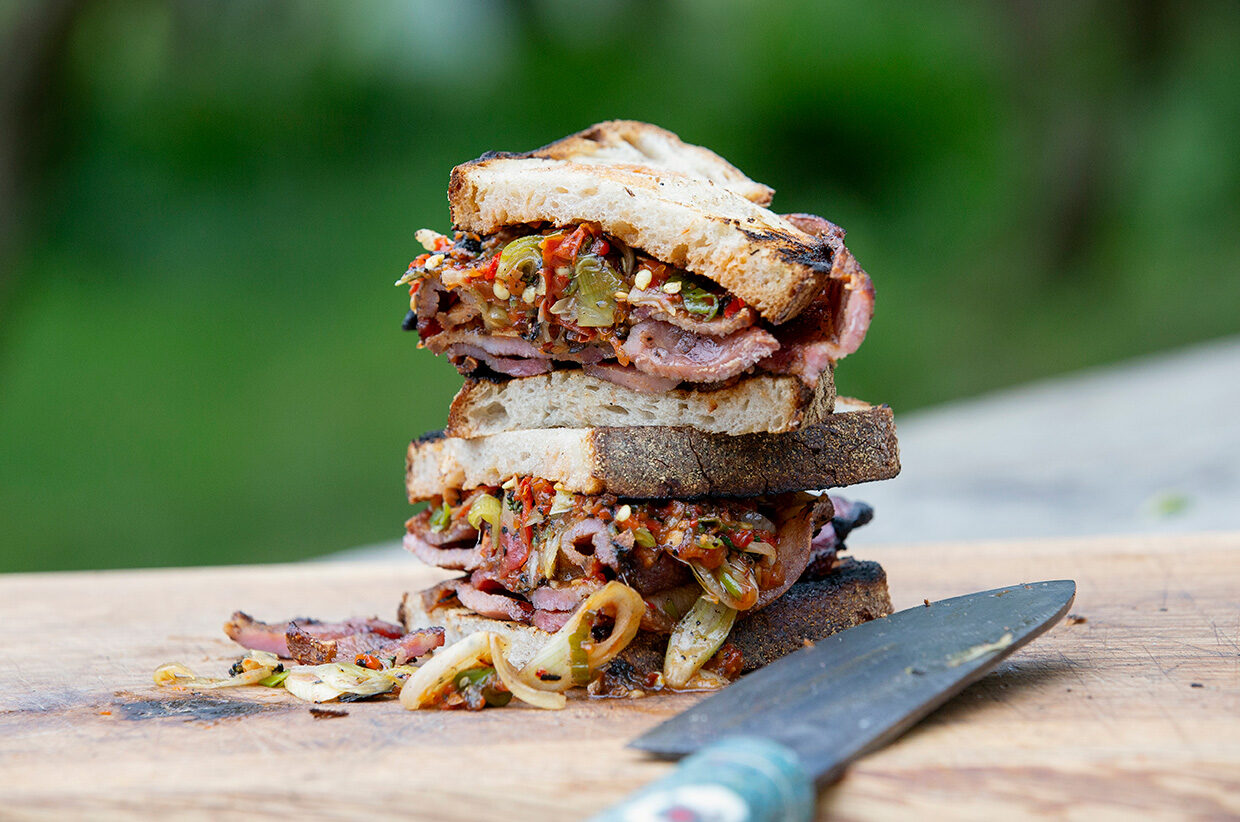 Cooking with Beautiful and the Feast

We could start with how cooking over fire is elemental, how it tugs at some primal need, how it threads a flame through human history, how it is the essence of human psychology – some say human society. Maybe when the smoke wafts up in your face, when the aroma of charring hogget flits up your nose, it does spark an ember that goes back to The Beginning. Or, perhaps it’s just that cooking over the glowing embers offers a chance of communion – getting together, talking crap, can of beer in hand, with friends new and old. Maybe it’s just that there are few ingredients on Earth that do not benefit from a good scorching over something very hot. Louis Camille Maillard and his reaction be praised.

We meet Will and Keda Hall-Farrise at Kudhva in Cornwall on our Equipped photo shoot. It is 11.00am, and the fire pit is crackling away. We won’t eat till six, but slowly the red peppers are being crisped and almond-smoked (in his step-father’s smoking box) for a romesco sauce. The pork belly and hogget have been salted. There are plates of herbs, fennel fronds ripped from the stalk only that morning, cauliflower, sweet potato, lemons, belly pork from a neighbour, hogget from another.

‘Burnt things with bitter lemon and herbaceous flowers,’ Will says, almost swooning. He points out some saffron that will be mixed with yoghurt later. ‘I didn’t realise, but saffron is indigenous to Cornwall. There are a couple of fields near where I live that used to be saffron fields. That’s why you get saffron buns down here.’

Will seems to go about his cooking as if it were the first time he’d ever seen the ingredient; with a sense of curiosity, of wonderment. He thoughtfully appreciates the work that went into growing a vegetable, caring for an animal – and, as I discover, a deep appreciation of the producers themselves, the relationships he’s built up. You can see this in the food: these are dishes where (to quote Samin Noserat) the intervention of salt, fat, acid, and heat is all incredible ingredients need. 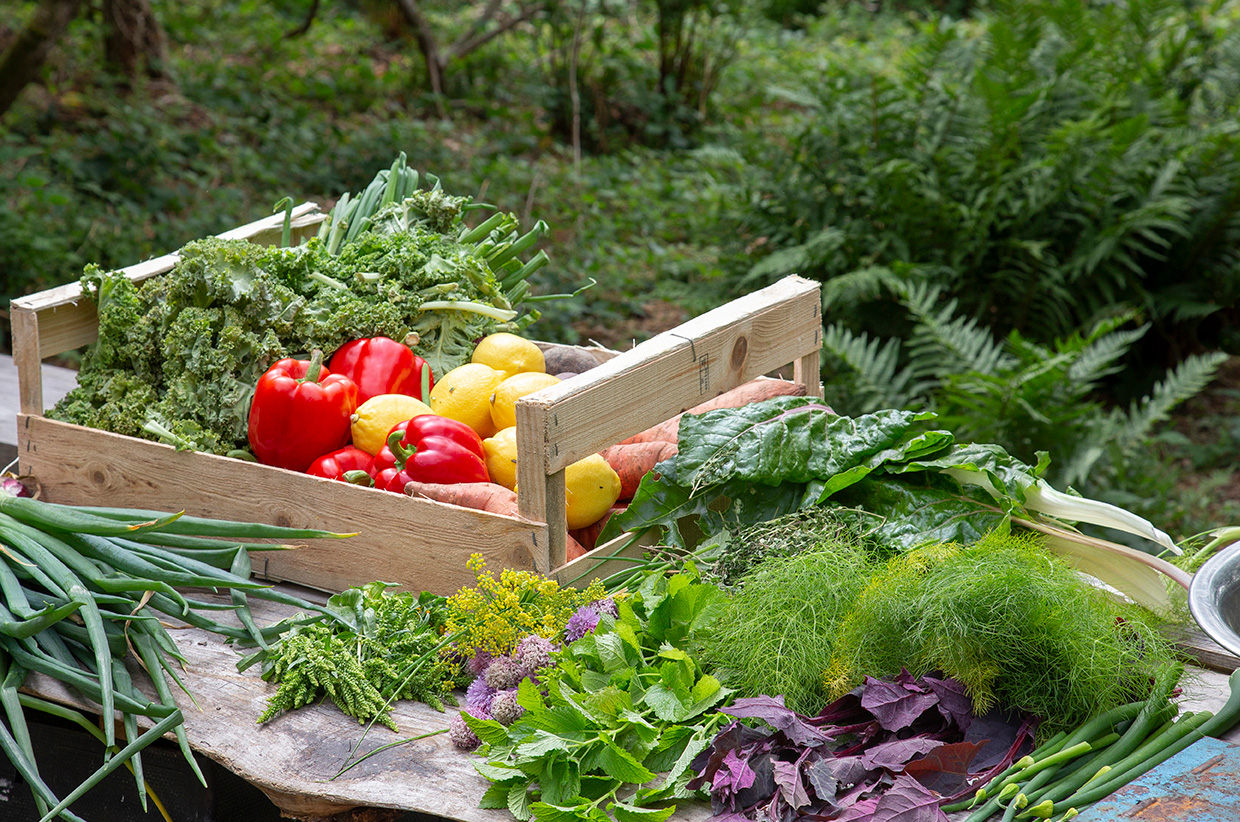 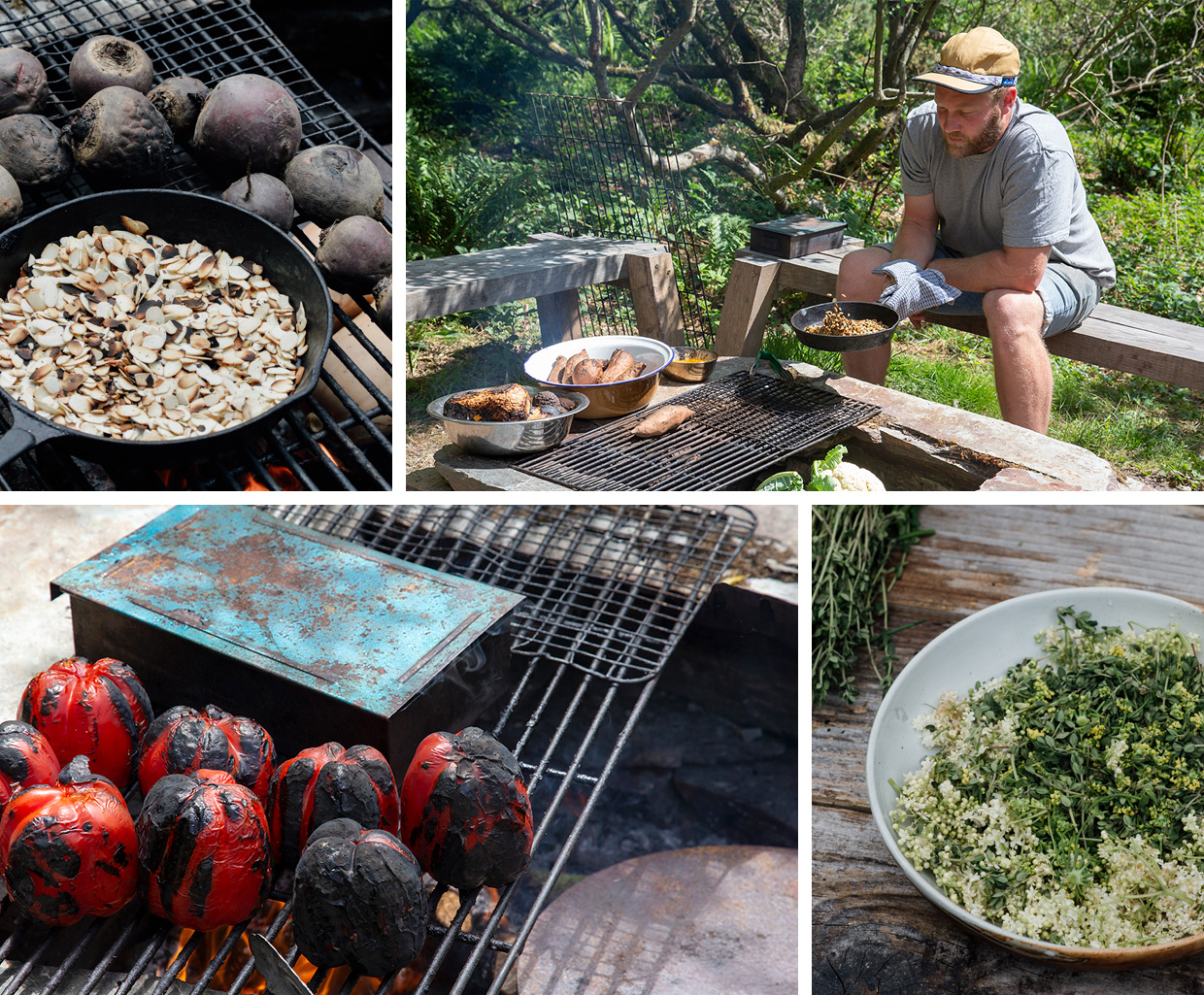 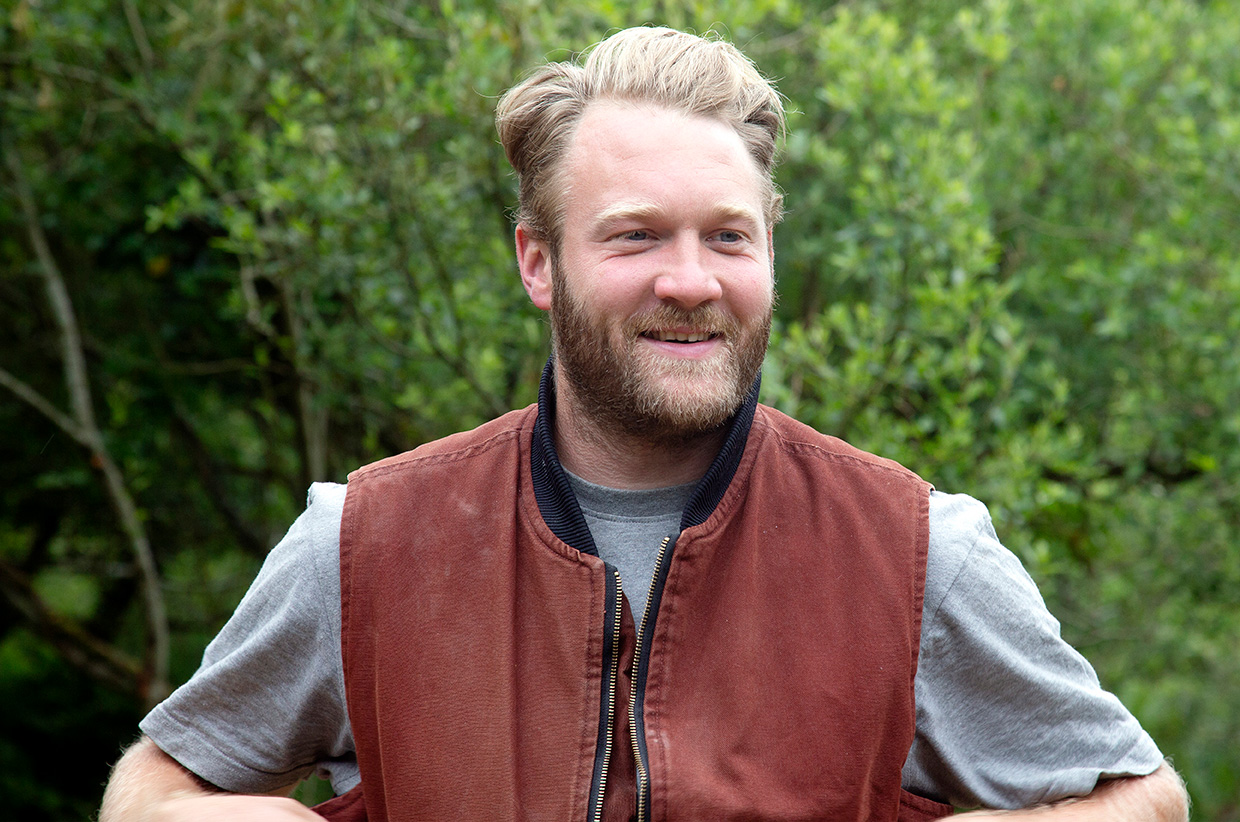 We sit around the fire pit while tomatoes are slowly broken down over the coals. We shift around the benches as the smoke follows us. Beside us is Kudhva’s reception area and a chimney. In the near distance, we can see the engine room, dating back to 1870 – constructed when this was a working slate quarry – and beyond that the white-speckled sea.

‘Today we’ve got some vegetables, and we’re going to burn them and cook them with some simple things that are grown around here,’ Will says. ‘Cooking up here at Kudhva is something that Keda and I try and do every weekend. The values that you get cooking at a place like this are what I want to try and instil in a restaurant setting like Temple [Will’s restaurant]. It’s about spending time contemplating how to cook, being able to explain the simplicity.

‘Food in its rawest essence is community. I know it’s a cliche, but that’s why we all came together. We used to live in separate groups but came together because it’s easier to feed more people. But somehow we turned that into something that fucks up the planet. I believe it could be something that enriches people’s lives and the planet simultaneously.’

Will and Keda, due to have been married this summer after 10 years together, run a business called Beautiful and the Feast, a catering company that reflects their ethos. They’re both partners in the highly rated Temple restaurant in Bude and, from this summer, resident chefs at Kudhva on Saturday evenings and Sunday mornings.

‘That’s why I like coming up here to Kudhva, being covered in smoke and the smell of the fire, because it reminds me of that. It’s very very naive of me to think that I can cook food in a restaurant setting that’s going to make someone think “fuck me I’m going to change my life”, but if they can at least think for a second about the person next to them or the person they meet when they leave then that’s a really good, positive thing to do.’

Will and Keda’s journey to this point is far from classical. Will’s background is in photography (the food does look beautiful too), but it was the experience of working in a café on the shores of New Zealand that kneaded his love for cooking. ‘While I was out there, I was learning to rear my pigs and lambs and grow my vegetables. I was working 50m away from the sea. Waking up at five in the morning, making bread in the morning, tending the vegetables in the afternoon and doing evening service.’

Keda returned to a high-pressure job in London, and Will to work experience at his favourite London restaurants, but it was their New Zealand experience that they hankered after. They moved to Cornwall: ‘Because it’s as close as you can get to New Zealand without moving there. There are still occasions when the weather is crazy hot, and I’m driving down the coast, you can see all the way down the jutting coastline, it’s misty, there are ferns everywhere, and you’re getting burnt at 11.00am – it’s the same thing!’ 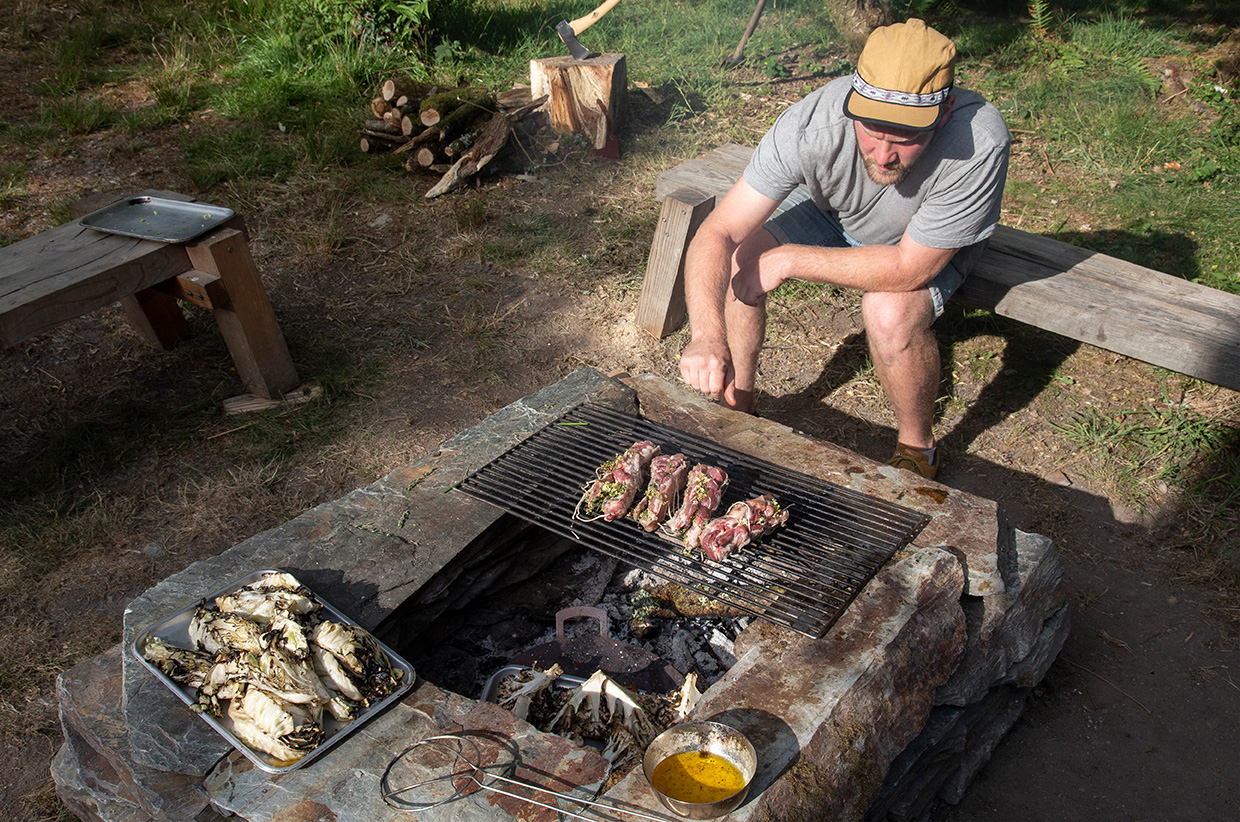 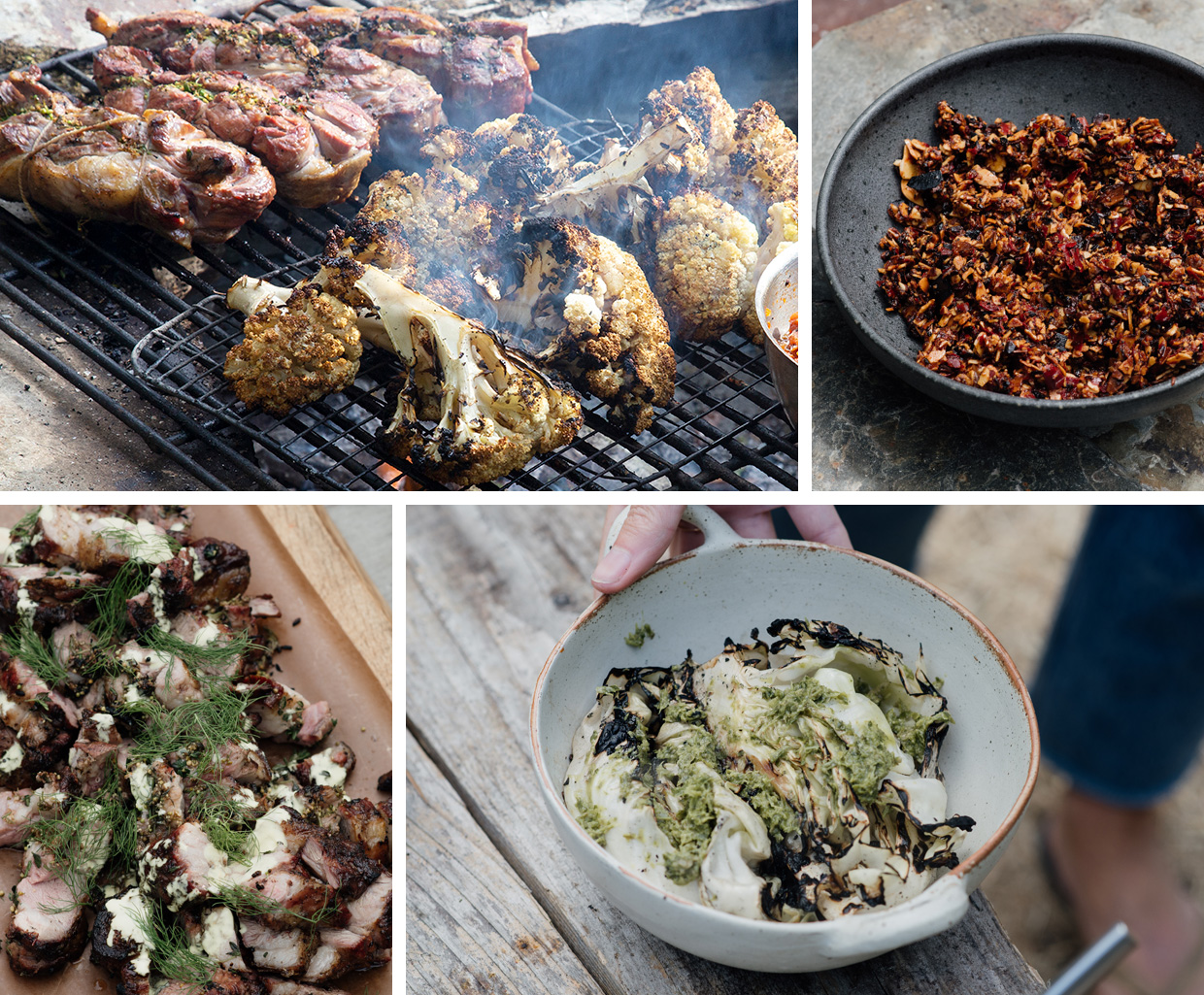 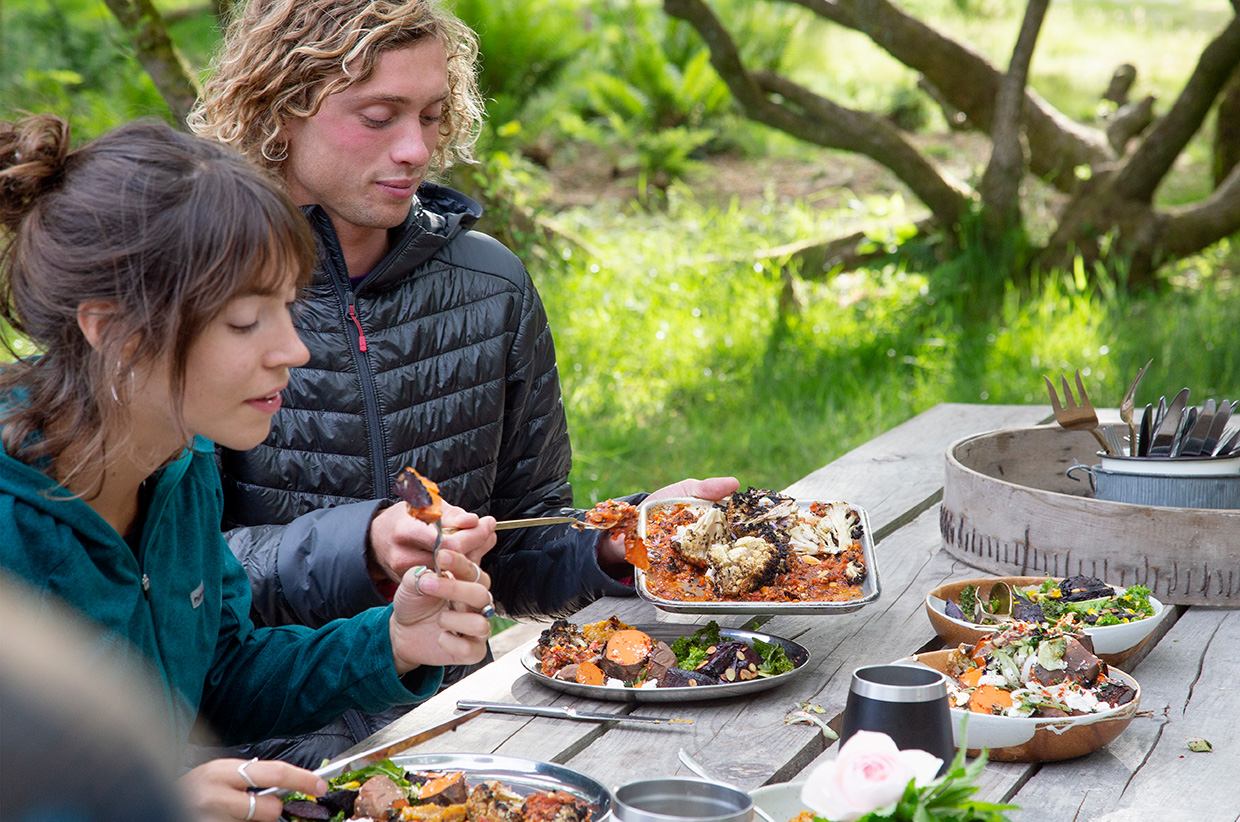 They started Beautiful and the Feast and converted a horsebox to a food stand in Widnes Bay over summer weekends.

‘I thought about what you’d want to eat if you’d just come out of the sea freezing cold, and that was hot, awesome things. Doughnuts and coffee and salt beef sandwiches, baking the focaccia and making salt beef from cows that were reared two fields back. We’re working with organic salad growers doing 40-50 types of leaves. People were saying the salt beef is awesome, but the salad is insane.’

It’s here Will realised the power of quality local ingredients, and if that could be harnessed everyone could benefit. It’s how the menu at Temple got thrashed out.

‘We started Temple to change the food chain in Bude,’ he says. ‘To not have to go to big suppliers but to support local communities, to all rise up at the same time. The infrastructure down here is difficult, but the conversations and the joy are really simple. It’s all low key, but it has been symbiotic. Temple was built to change that food chain so people could make the connection between local suppliers and their plates. Temple is always striving to see what can be different.’

We sit around the table, and dishes are passed around. Colour, texture, flavour are as vibrant as the conversation. Food is the great facilitator. It’s the start of a long evening that will involve guitars and camp fires. It is communion.