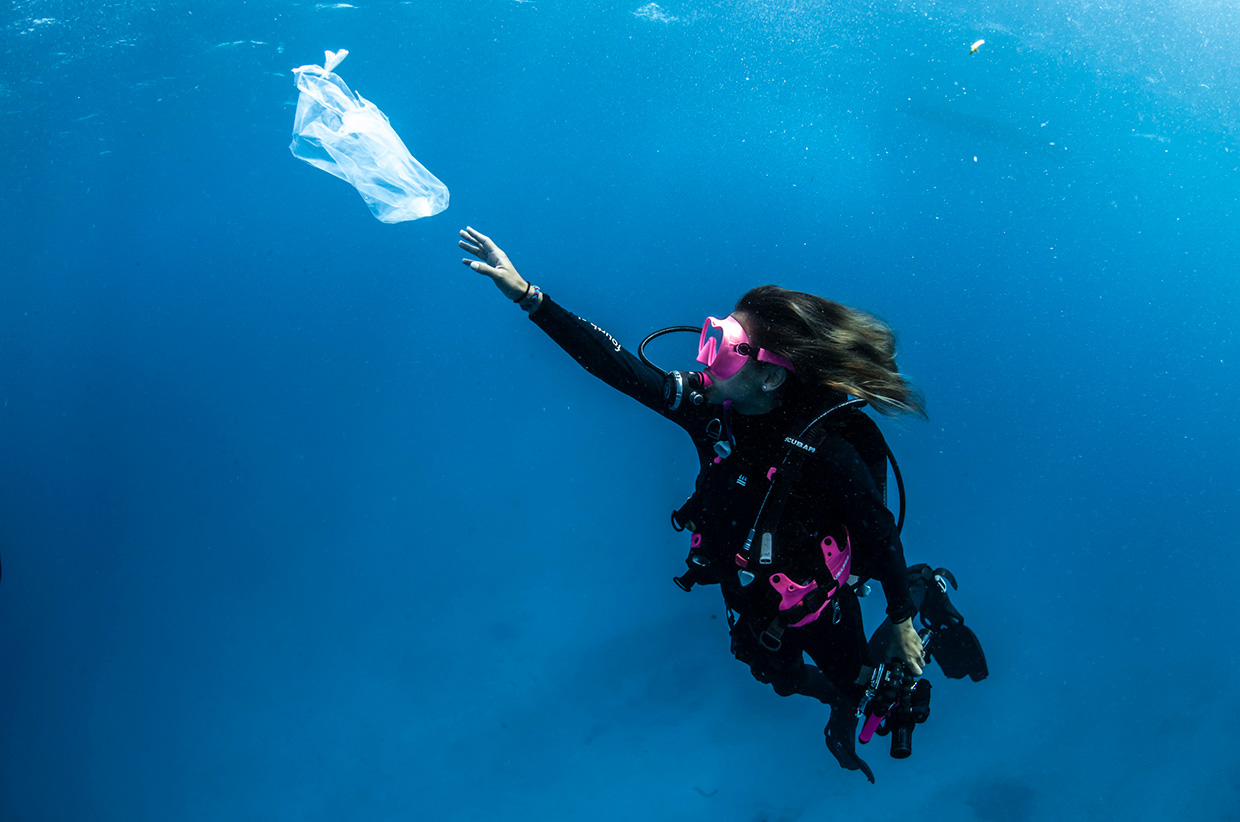 Not everyone can claim that they’ve scuba dived in every continent. But not everyone dives for the same reasons that Sarah Gauthier dives. Sarah wanted to raise awareness of the plastic problem – not by sharing distressing photos of the impact of plastic on wildlife, but by showcasing the incredible world that thrives under the surface. By bringing people on her journey with her, Sarah wanted people to fall in love with the water, just like she did, and want to protect it, just like she does.

We spoke to Sarah to hear more about her experiences diving in the cold and icy waters of Antarctica.

I think what made me fall in love with diving was the excitement of discovering a whole new world. All your worries are left on the surface; it’s just you, your equipment, and nature. In that moment, you feel like you’re in control of your life. And maybe it’s a cliché, but I wanted to become a diving instructor to share that feeling with others.

Even before my first diving class, I can still remember walking along the beach and finding plastic in the sand. When I started scuba diving, I realised how bad the problem really was. And the more I dived, the more I noticed the plastic in the water. I came across it on every dive I completed, without fail.

The media portrayal of the plastic problem made me feel so sad. The pictures being circulated of animals suffering made me feel so helpless and powerless to stop it. But one day I decided to take control. I wasn’t an engineer or scientist – someone who could find a way out of the problem – but I did have a voice. And as a diver I was close to the problem, so I had a voice that would resonate. I decided to go on a mission to dive in all seven continents, by myself, to raise awareness of marine conservation and to show the world that our oceans are worth changing your lifestyle for. 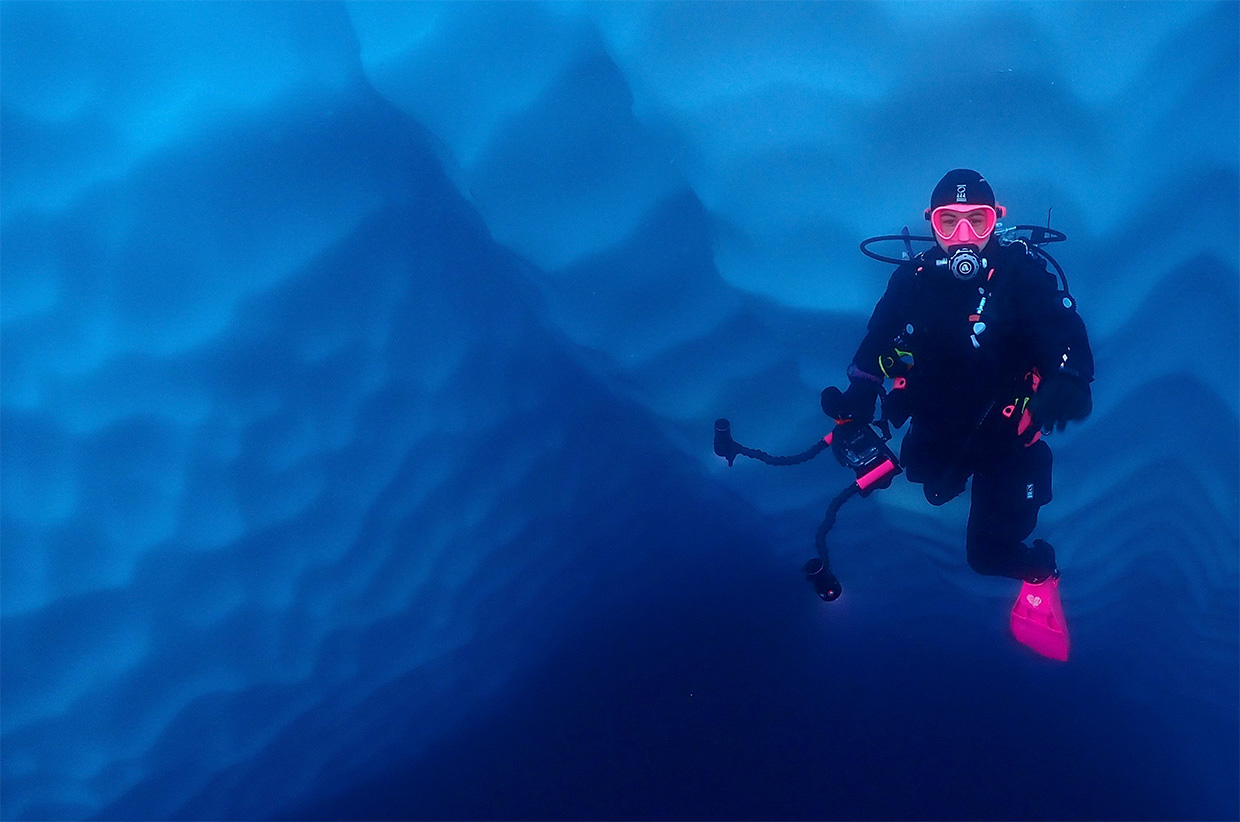 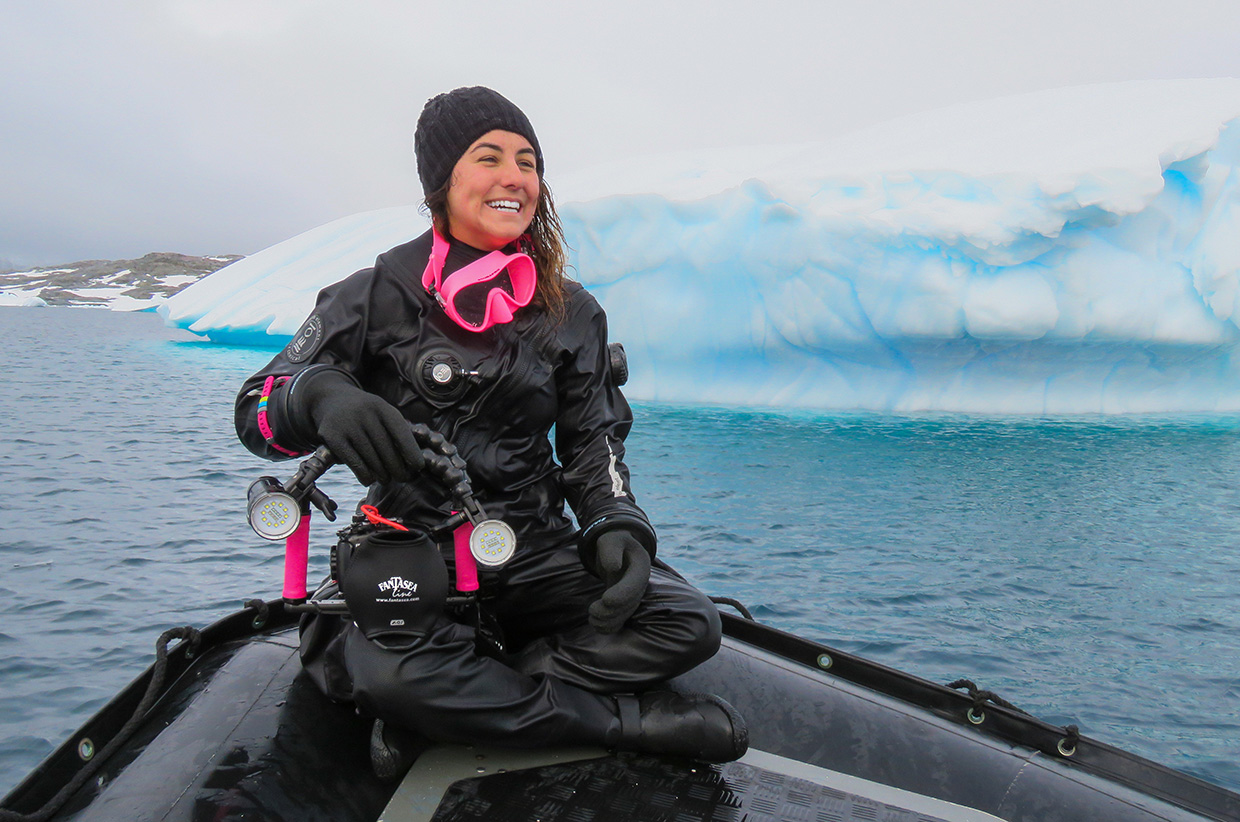 I’ve done a lot of diving in warmer climates – I qualified in Honduras and Utila and have taught in some amazing places such as the Cayman Islands. But cold-water diving was something I hadn’t encountered before, and the underwater scene is entirely different. Antarctica was definitely the continent I was most worried about.

A lot of things were going to be different for this dive. When I’m teaching, I emphasise to my students that you must always train within your limits. You should never push your limits underwater – the results could be fatal. And while I applied that rule to myself for this dive, I did feel as though I were pushing my limits further than ever before. I trained properly and extensively but there was one element that I was really struggling with – and that was training my mind for the dive. The bits that could go wrong kept turning over in my head: the cold, what if I met a leopard seal, what if something went wrong and the nearest hospital was a two-day boat trip away… the cold!

In Antarctica, the water I dived in was at a temperature of -2°C. At first, it’s the thermal shock that hits you, especially your face. I remember getting brain freeze every time I did my roll-back entry into the water, and it would only take 30 seconds until I could no longer feel my face. I had two little spots that were directly in contact with the -2°C water, and they just became numb – which actually meant that I couldn’t feel the cold any more. 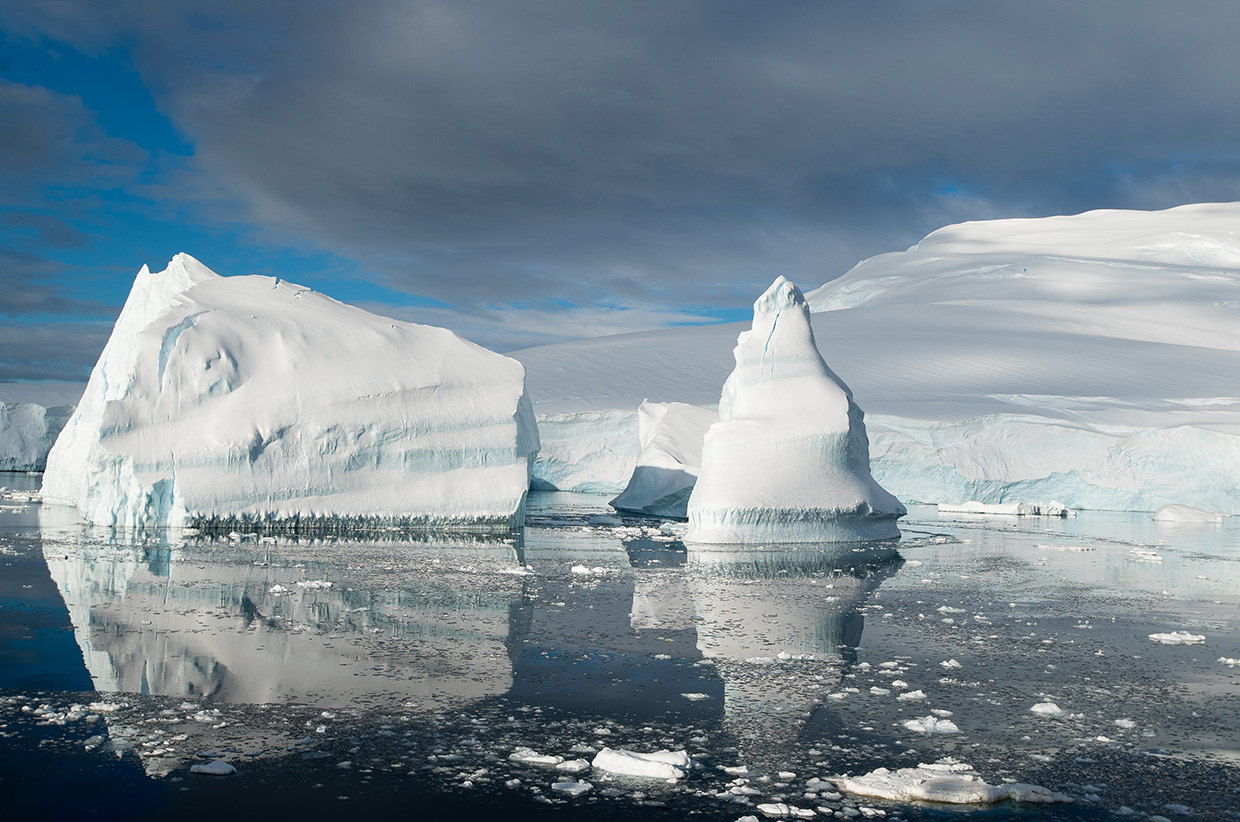 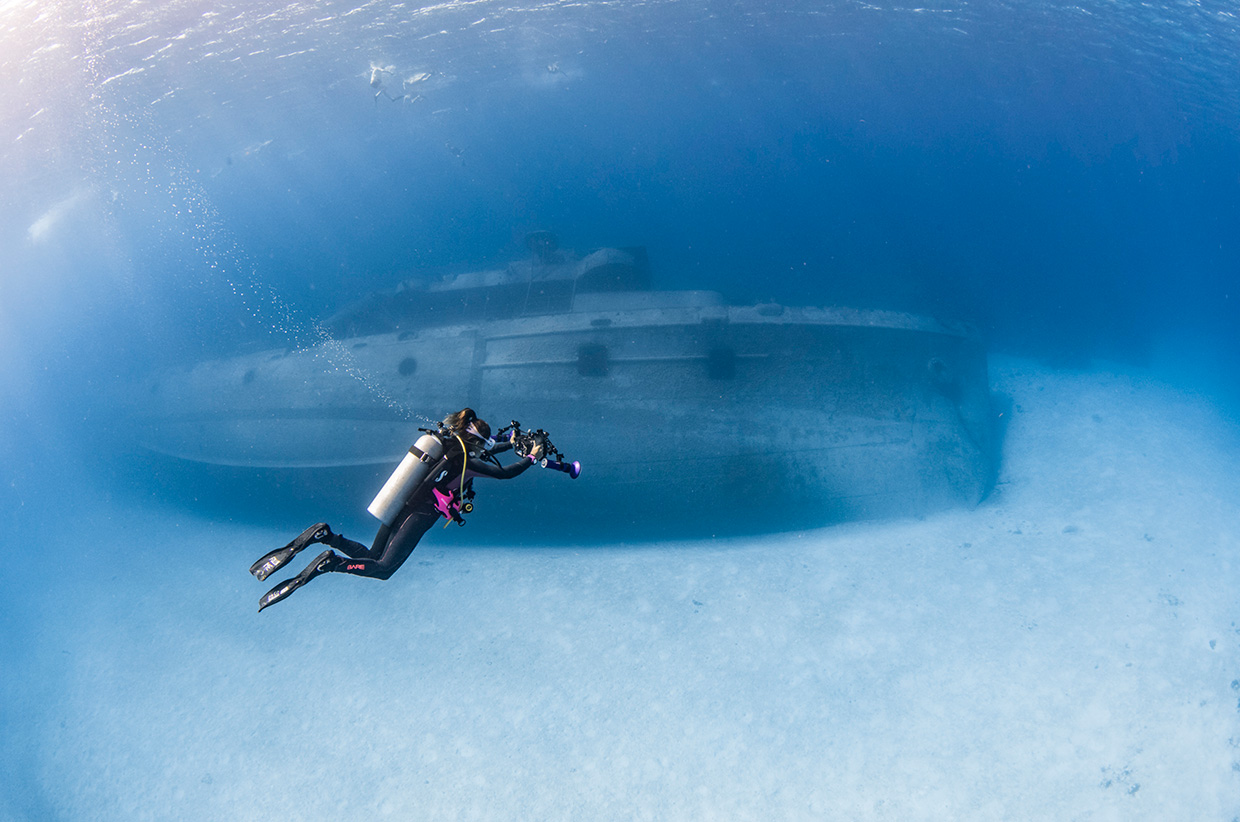 I also had to dive in a drysuit. I wore lots of undergarments underneath it as well, which made me feel like the Michelin Man – but also made me much more buoyant. To compensate for the buoyancy, I had to wear a lot of weights, which made it harder to move more freely. Before the dive, I didn’t know if I’d even be able to move my fingers in the dry gloves and the cold water to manage my diving equipment or my camera.

But once I was in the water and I’d got over my fears, and had managed to get used to my new equipment, Antarctica soon became my favourite dive I’d ever completed. I’ll never forget the moment I came face to face with a leopard seal carrying a dead penguin in his mouth. It was the most intense encounter I’ve ever had with an animal. I could see his massive teeth less than 2m away from me, and his giant eyes were curiously looking at me – probably wondering what this weird animal with pink accessories was! He left the penguin in front of me, went to the surface to take a breath, grabbed his meal back and left. I will forever remember that moment.

I wanted to dive in every continent to show people how beautiful the underwater world is. I am convinced that to want to protect something, you need to love it first. I believe that bringing people with me on my journey with the help of social media has raised awareness of marine conservation – and even if one person changes their habits on using plastic, that’s a positive change. 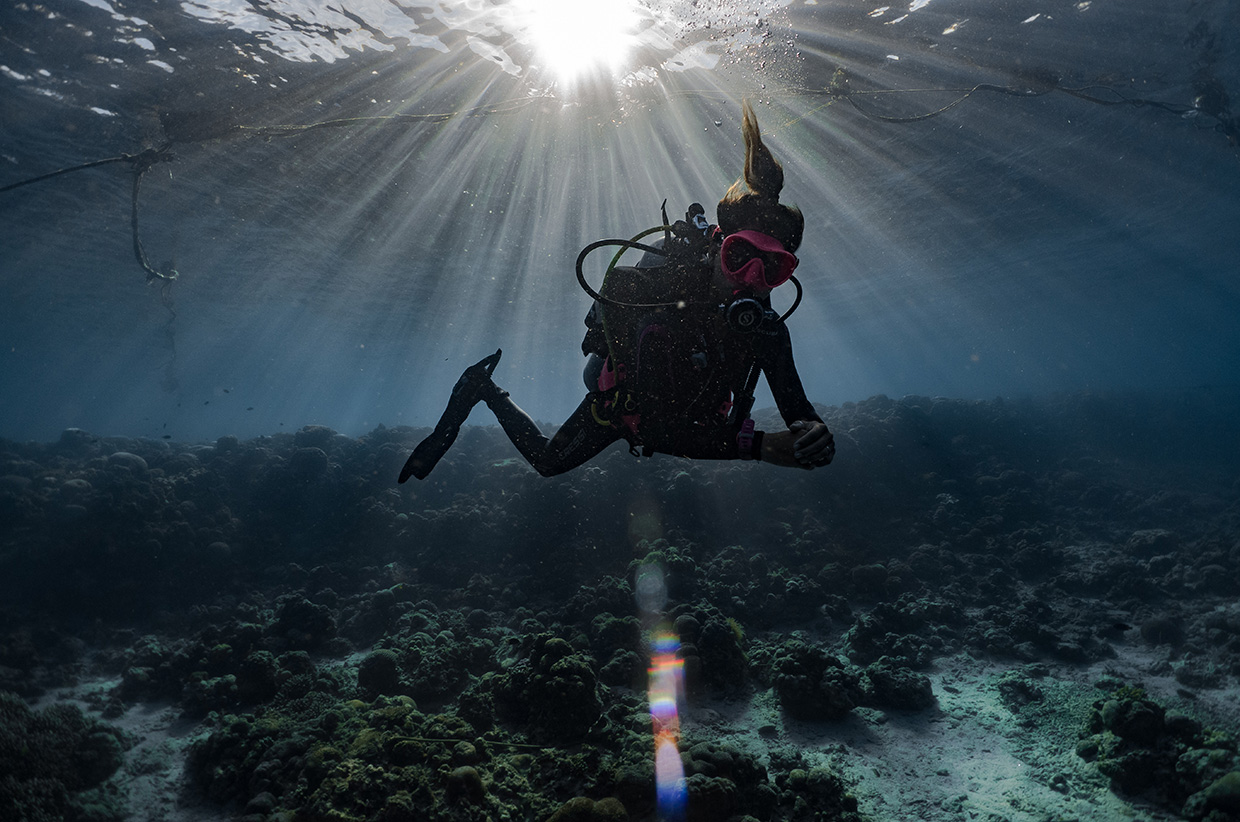 Diving around the world has been such a special experience and I feel incredibly lucky to have been able to do it. Antarctica now holds such a special place in my heart. I’m already planning to go back, but this time with a filming crew so I can document the experience even better. I’m dreaming of the patterns on icebergs underwater!

Diving in all seven continents proved to me that our planet is a jewel and must be protected at all costs. It’s my hope that bringing people along with me on my journey proved that to them as well.

Street Elite Manoeuvring through the Munros – An Interview With Hamish Frost