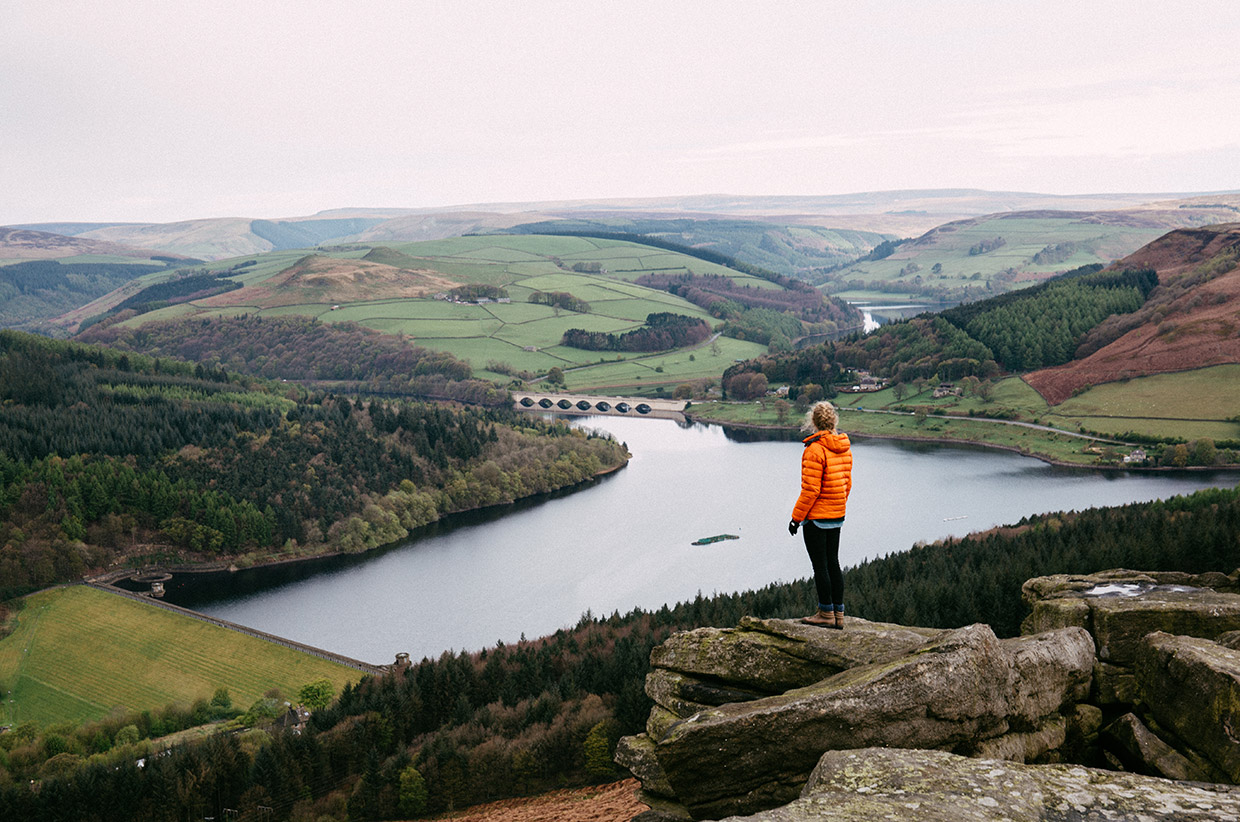 A landscape consisting of moors, dales, peaks and pikes; open valleys brimming with vibrant purple heather, an abundance of sheep and the iconic drystone walls that characterise the area. The Peak District is situated in north-west England, suspended between Manchester and Sheffield at the southern end of the Pennines. It is Britain’s first National Park, created in 1951, and the second most visited in the country. Yet despite its popularity, finding a peaceful place to escape the bustle of modern life is easy here, nestled amongst gritstone peaks or sitting atop a springy mattress of heather in the gentle breeze with a flask of coffee.

The Peak District is commonly divided into two parts: the Southern ‘White Peak’ area, where the hills are green and rolling and there are numerous limestone caves, caverns and valleys; and the northern ‘Dark Peak’, which is wilder and largely uninhabited due to a cap of Millstone Grit over the underlying limestone. The soil over this gritstone cap is saturated in winter, creating bogs and areas of black peat. Beyond the rolling hills and stark moorland plateaus, the Peak District is home to an array of lovely little villages like Castleton and Bakewell, scattered with cosy country pubs and traditional bakeries. It is a place that feels timeless when travelling from surrounding cities like Manchester and Sheffield; a place where the more relaxed pace of life is alluring and infectious. 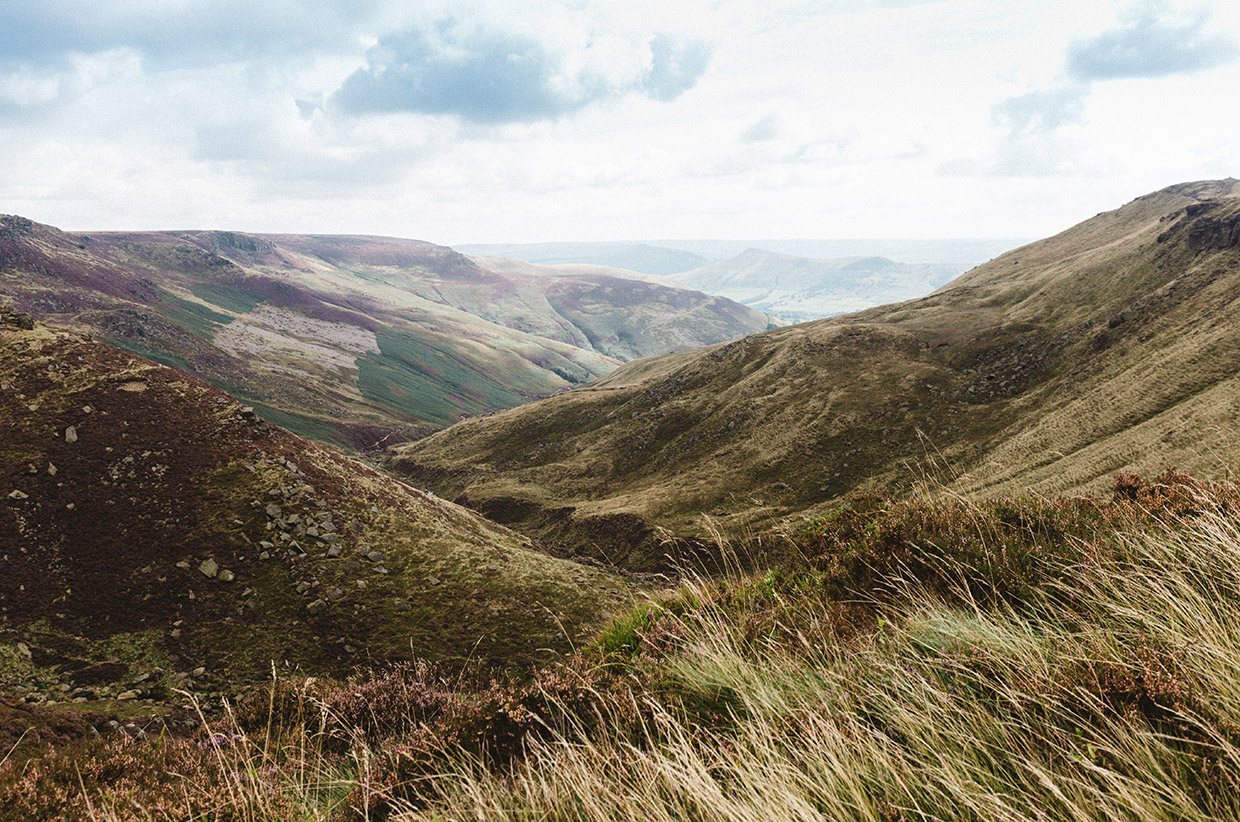 Living in Manchester, getting to the Peak District means a hop on the train and jumping off when the hills come alive with the deep colours of purple and magenta, the green of the grass and the dazzling gold of sunlight on leaves. Edale is the port of call for many keen ramblers, being the start of the Pennine Way and the station at which to alight for hiking onto the moorland plateau of Kinder Scout, or over the enchanting curved lines of Mam Tor (‘Mother Hill’) – two lovers gazing longingly at each other from across the valley, while the train rattles through the basin below.

At 636m, Kinder Scout is the highest point in the Peak District. The most (in)famous way to ascend is via Jacob’s Ladder, aptly named after the connection between earth and heaven; a relentless cobblestone path to reach the summit. Views from the edge overlook the vale of Edale and across to Mam Tor on the other side of the valley. Gritstone protrudes from the earth, and the surrounding moorland is dense, stark and brutal. Over on the other side of the valley, the banks of Mam Tor are green and lush, populated by sheep and brushed with long golden grass. Mam Tor is the ideal setting to watch a sunrise, especially if lucky enough to witness a rare and unpredictable inversion; when the clouds cover the base of the valley in a blanket of fluffy white, the mist rises slowly as day breaks with a hazy glow over the surrounding pastures. A magical way to see in the day. 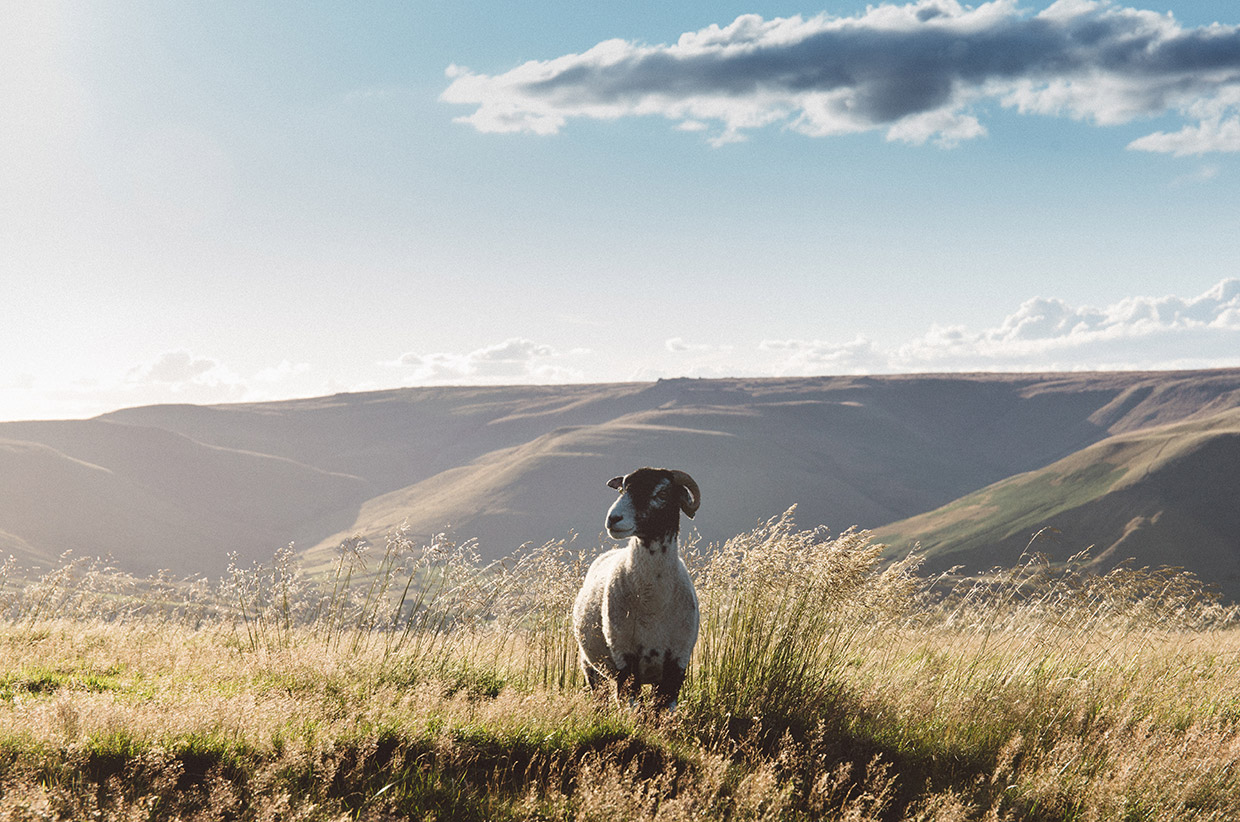 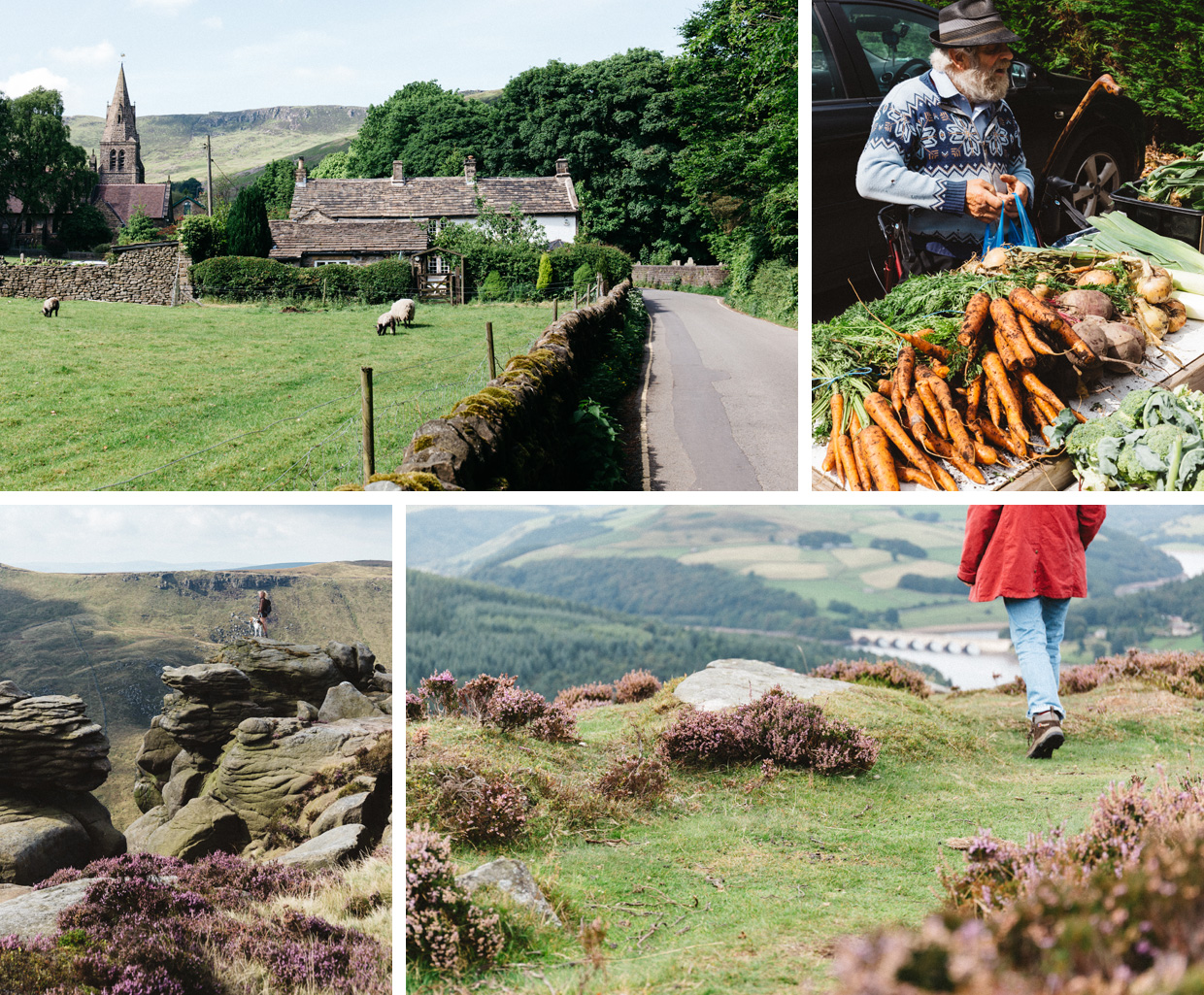 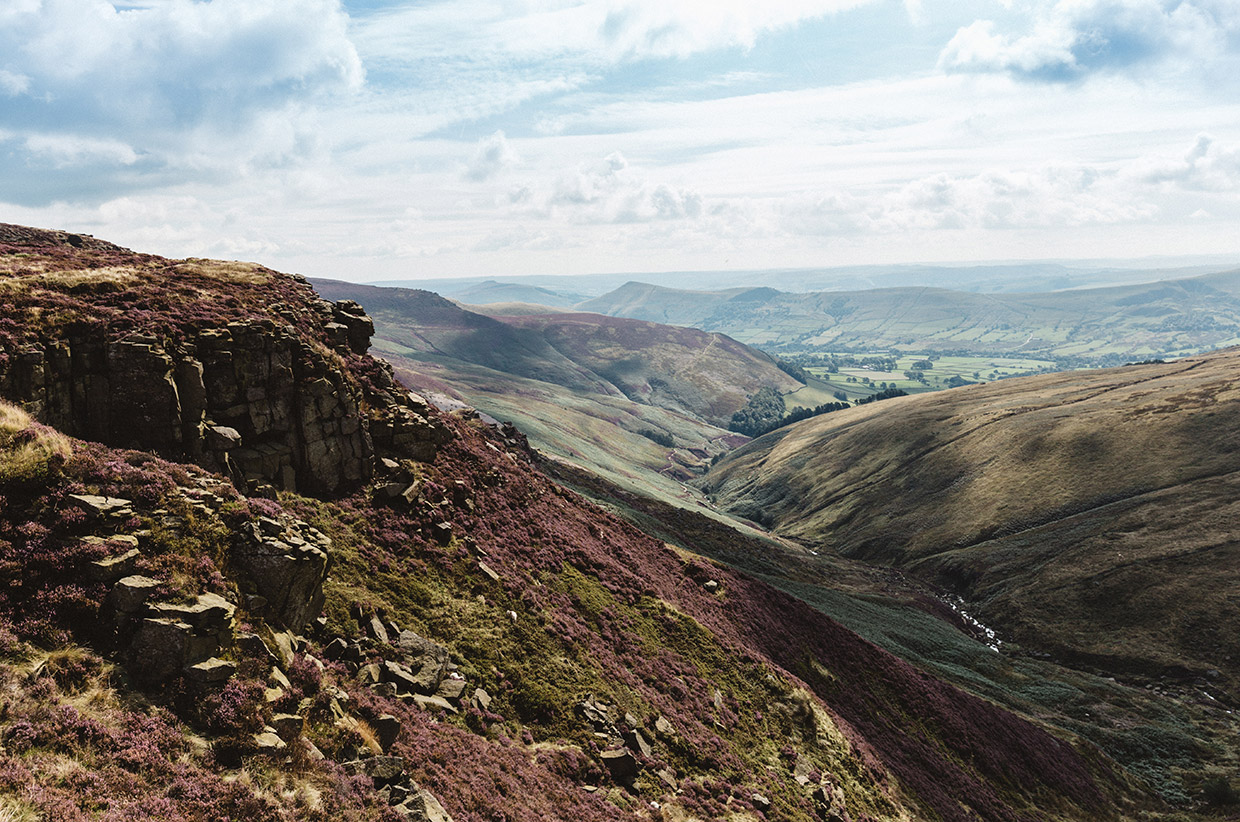 The contrast between the two sides of the valley is symbolic of the Peak District itself. Green rolling hills and barren, purple moorland; patchwork valleys and welcoming limestone villages; the birthplace of the traditional Bakewell Pudding and a rambler’s haven for hundreds of years. The timeless charm of the Peak District only increases with the changing seasons, as purple summertime moors assume the muted tones of autumn, soon to be buried under a sprinkling of powdery snow – and then the process renews itself, and there is nothing so tempting as witnessing it all over again.

Ramble Guides is a website dedicated to outdoor travel guides to the UK’s National Parks and wild spaces, specifically and carefully curated for the modern day explorer. Ramble aspires to encourage more people to spend time outdoors; rambling in the beautiful landscapes of our homeland and enjoying the traditions, cultures and quirks of our rural villages.
Website: ramble-guides.com

Athena Mellor is a writer, photographer and founder of Ramble Guides. She is passionate about travel, the outdoors and sharing stories through photos and words of adventures, big and small. After graduating from University College London with a degree in Modern Languages, Athena spent four months solo cycle-touring around parts of the USA and New Zealand, before returning to the USA to explore more of California, Oregon and Washington. Athena is based in Manchester, England, though can often be founding rambling over the moors in her home-county of Yorkshire, England, or photographing the hills of the Peak District.
Website: wildandwords.com