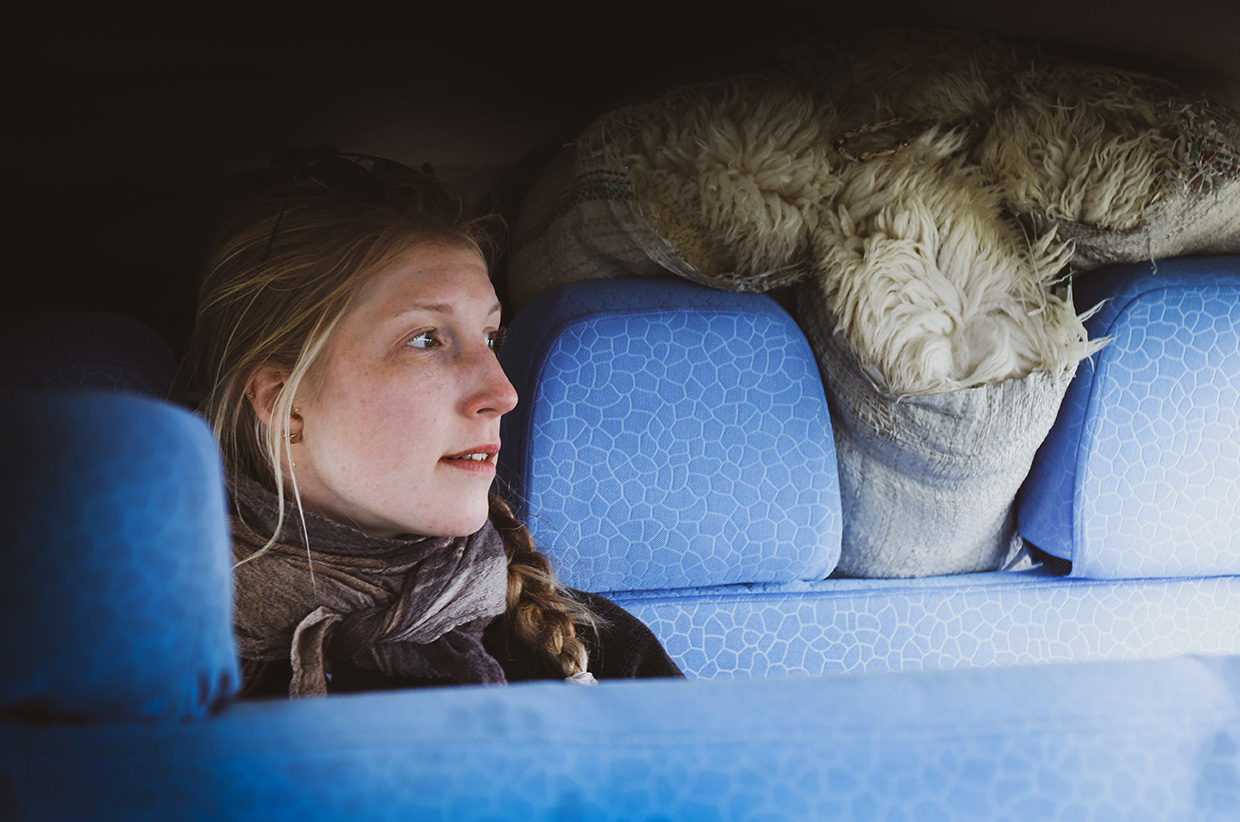 Words and Pictures by Jen Randall

The wind whipped at our hair and threw grit in our eyes. It ripped at the tents as we tried to shove poles in the right places, pin the corners down. Some of these women had never camped before, and as the watery sun sank beneath the surrounding hills I wondered how long we’d last.

It was our first evening in the wilds of Mongolia, nestling into a remote valley east of Ölgii, capital of the country’s westernmost province and the ancient territory of nomadic animal herders and eagle hunters. Ten days earlier an email had arrived from She Went Wild – an Australian/British community that empowers women by sharing adventure – saying my application to film an all-female team as they explored Mongolia by car, foot, and horse had been successful. When I applied I knew in my gut it would be good for me, beyond the chance to finally visit Mongolia. But when I read the email my immediate reaction was panic. It had been a difficult few months and the idea of stepping beyond my carefully constructed comfort zone shook me.

But that’s what adventure is all about, leaving your comfort zone behind, and somehow I never quite found enough reason to decline. I tossed and turned in the wild wind that first night, kept awake by roars pummelling and rain slashing at our flimsy walls. I was sharing a tent with Katrine, a young commercial pilot from Denmark living in Hong Kong. Like all 13 women in the group, she was intimidating in her intelligence and success, and it was at breakfast the next morning where I realised why I was there: I had a lot to learn from these women. 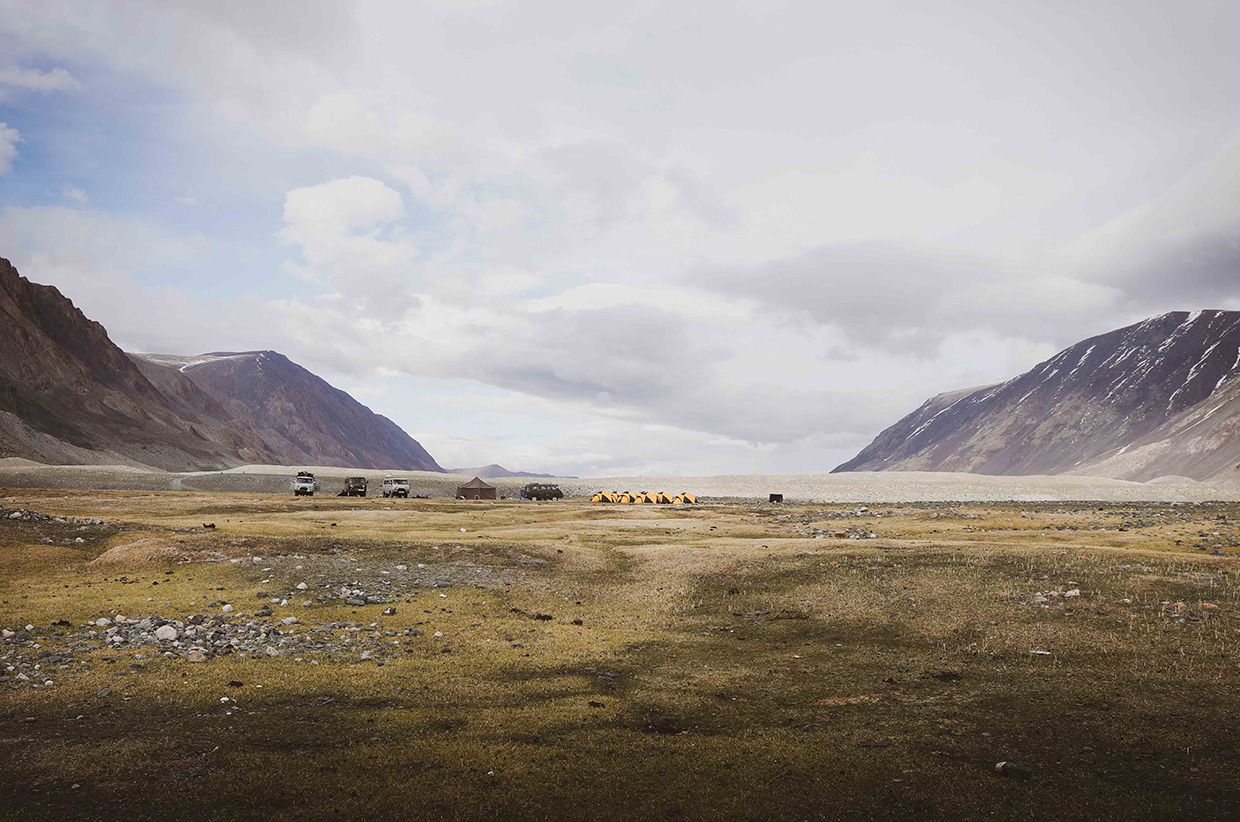 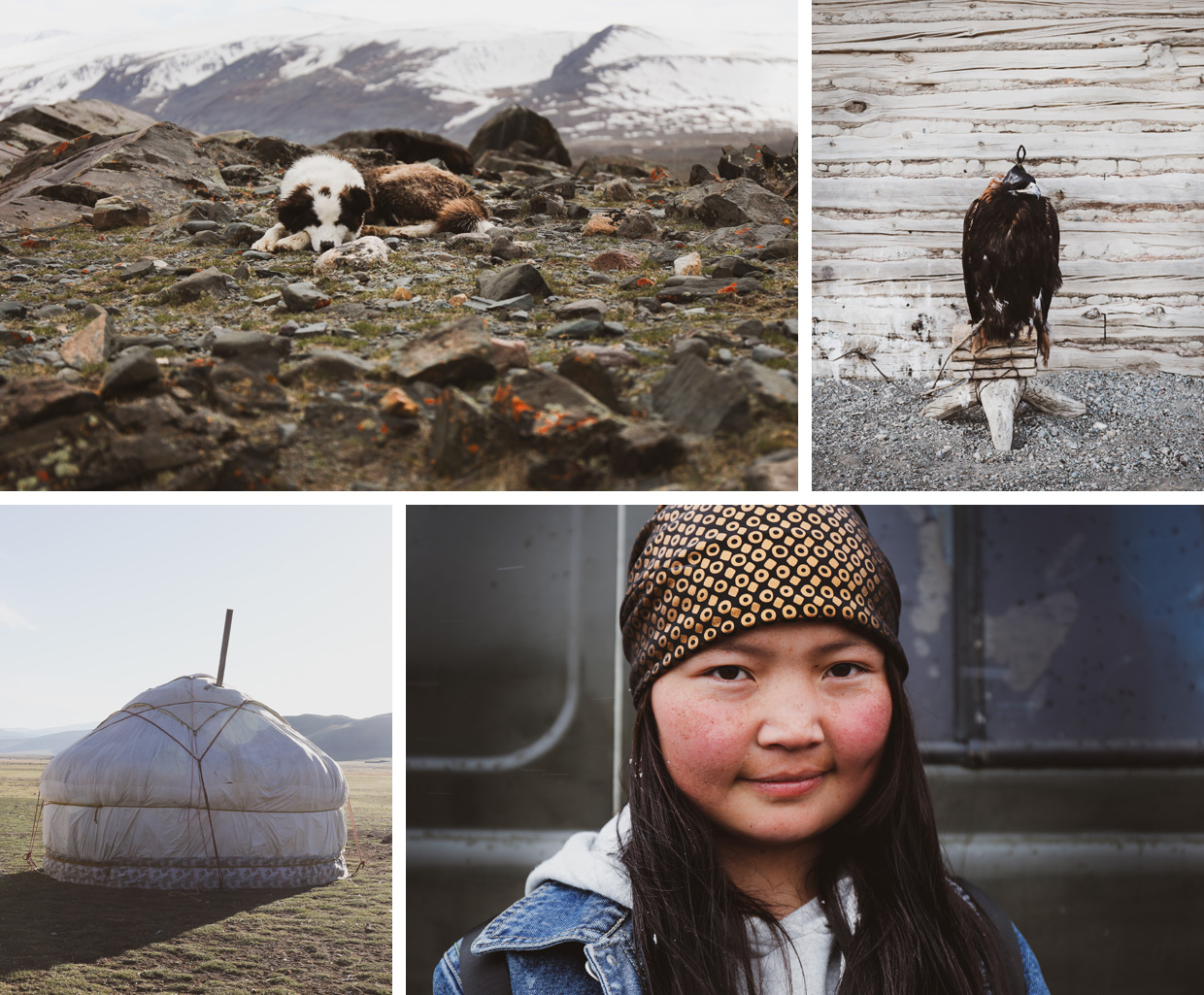 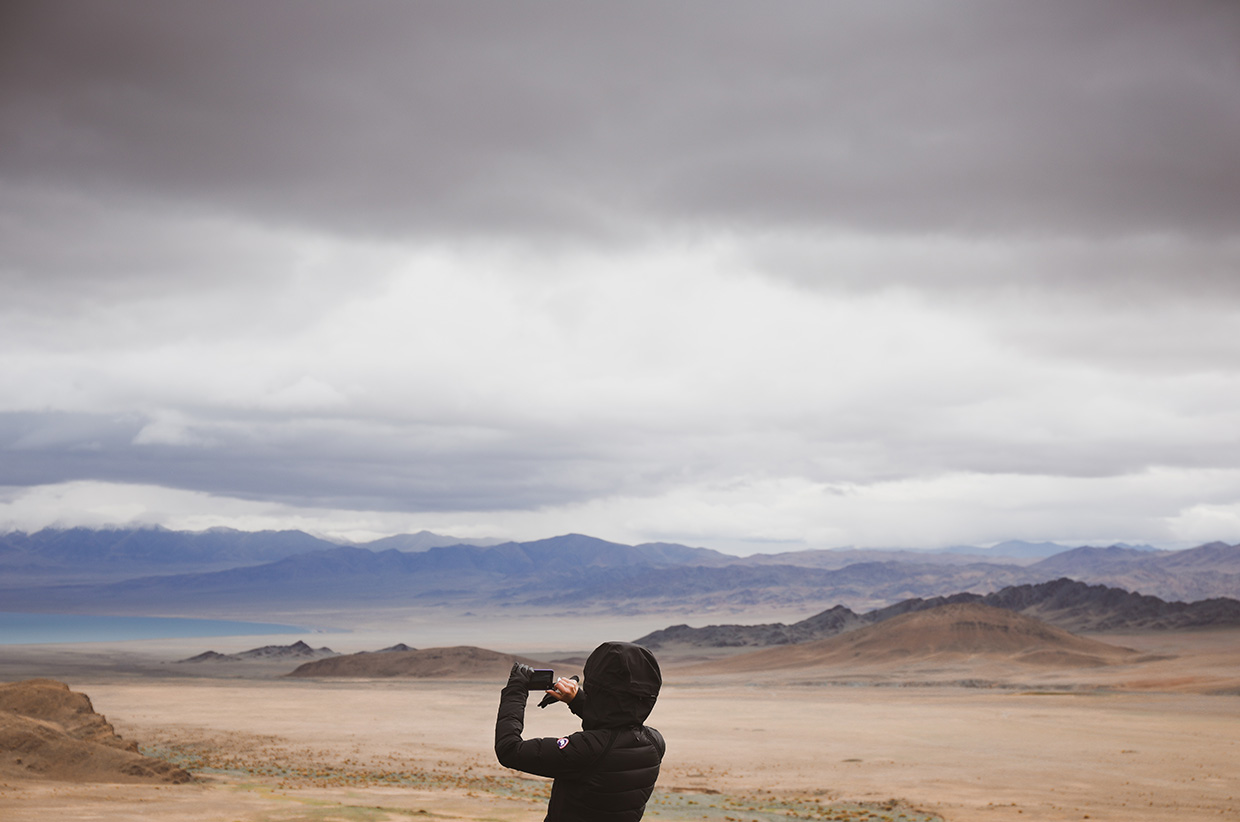 The group was travelling under the banner of Women on a Mission, a charity set up to raise awareness and funds for female survivors of conflict and abuse. Fundraising for a partner charity along the way, WOAM sent all-female groups on challenging adventures from the deserts of Jordan to the Mongolian steppe. Prior to this expedition, WOAM had raised over £500,000; and on this occasion had partnered with a women’s shelter in the country’s capital Ulaanbaatar, where it is estimated that one in three women suffer domestic abuse.

Our 10-day route flew and bused us west from Ulaanbaatar to Ölgii, where we ate lunch with Aisholpan, the teenage eagle huntress. Made famous by a documentary following her into the eagle-hunting arena, she’s a controversial celebrity in Mongolia, both celebrated and criticised for breaking an ancient, exclusively male tradition. We felt firmly on her side of things, and soaked up her stories of a new wave of huntresses, both in awe of her achievements and reassured by her normality – she regularly checked her mobile while we spoke. It was a little reminder of Mongolia’s shift with the rest of the world; satellite dishes pinned to gers, motorbikes replacing horses.

From Ölgii we bumped and rolled our way into Altai Tavan Bogd National Park, zooming along faint tracks across the rocky, then sandy, then grassy landscape in a convoy of old Russian 4x4s. I sat quietly in front and listened as the team got to know each other, sharing stories of lives in Singapore, Hong Kong, France and Africa, and of origins far beyond. Nadege, a creative director in Paris, was there to connect with her buried Mongolian roots. Anastasia, a full-time mother from Latvia, told of a friend discouraging her from joining the trip because she should be at home ‘making babies’. Yet there she was, spending her first night in a tent, about to climb her first mountain.

In Sagsai our vans pulled to a stop, the sun casting shadows across a pebbled plateau and pink mountains beyond as an eagle hunter appeared in traditional dress, golden eagle on his arm, horse between his legs. I chortled as we took turns playing hunter, passing the eagle from arm to arm. But when my turn came I got it. A golden eagle right there on your arm, its talons wrapped around your wrist, ready to hunt for meat or fur, representing a tradition and way of life going back some 2,000 years. 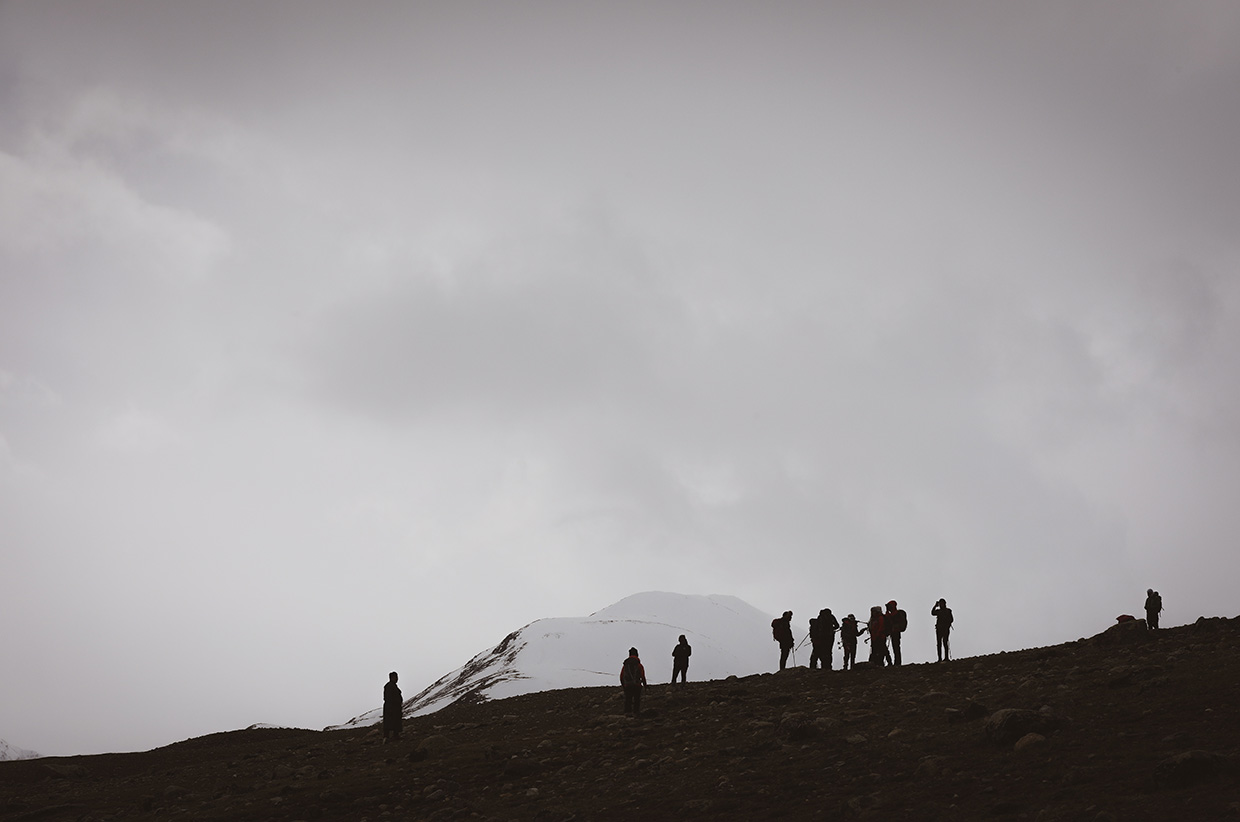 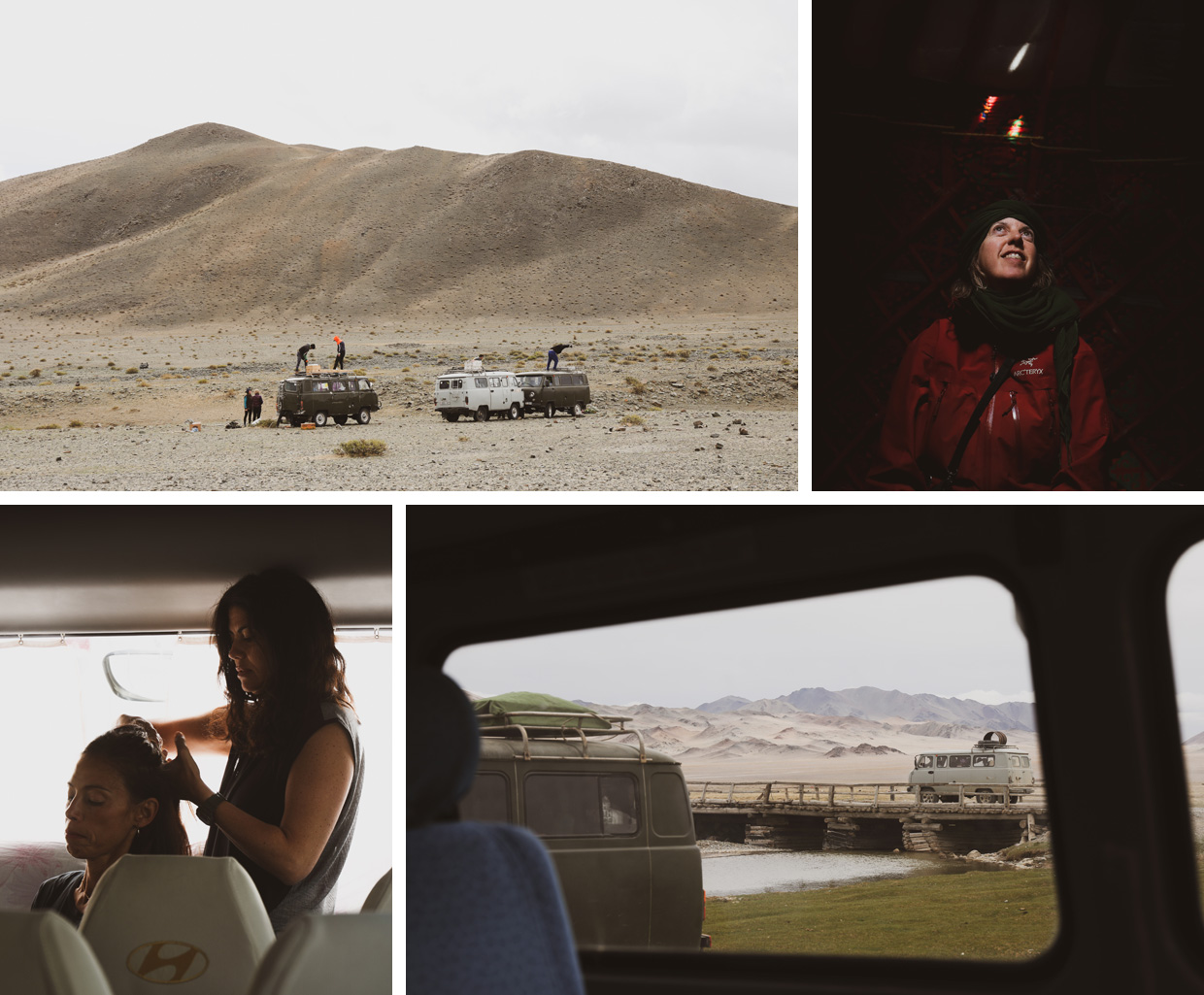 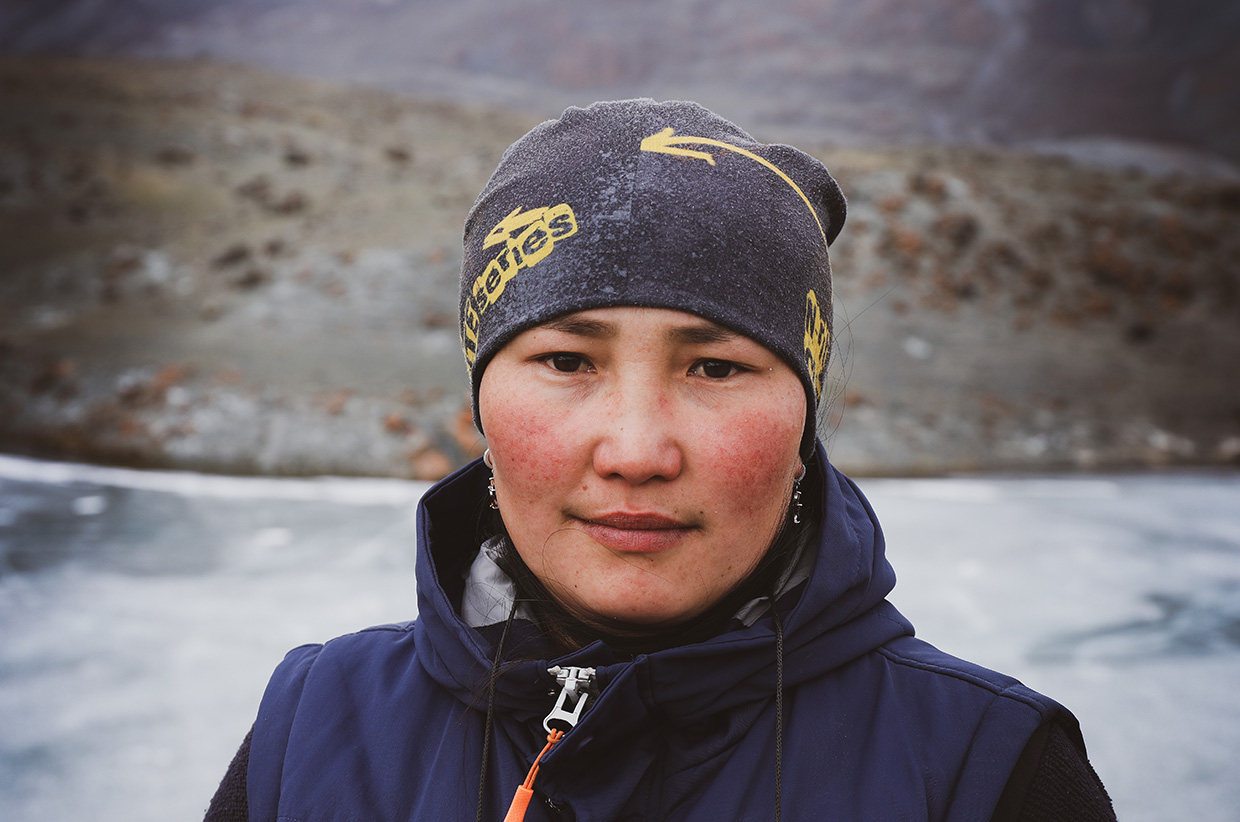 Winter clung on fiercely in the Altai Mountains. Muriel, a psychotherapist from Singapore, made gaiters from bin bags and duct tape to protect herself as we hiked through the snow. Early the next morning a herd of ponies was rushed up the valley, woolly and wild from a winter out to pasture, tough enough for Genghis Khan’s army to ride as they conquered their way west centuries before. We hopped on board and rode into rocky hills to see petroglyphs from the 5th and 6th centuries. Our young guide Nurka was bursting with pride. Of all the sights we’d see, these were her favourite: completely open and at the mercy of the elements, depicting scenes of snow leopards and deer, hunting missions and arrows being fired. That night we camped low in a grassy valley, encircled by rounded mountains and active ger camps where a local shaman appeared on a shining motorbike and a family came asking for painkillers. How far we were from the world we knew, where a doctor or pharmacy was just around the corner. Next we were fording a river in convoy, the mountains black and the grass yellow; next we were stopping for a flat tire while Iza-Menni, an art director in Paris, collected stones and pressed plants for her young daughter at home – a tableaux of the steppe, she said.

Those 10 short days felt like a month of moving and experiencing, and before I could blink I was back in my kitchen, cleaning plastic for recycling.

As I hoped would happen, flashes of the adventure visit me often – most frequently of our time in the Khui Tas Valley towards the end of our stay. For two days we lived with our driver’s family in their spring home, let into their routine of milking, herding, and caring for their sheep, goats, and ponies. There on the open steppe, my handsome racing pony opened up into a gallop as Linda, an American entrepreneur, sped up behind me, two local boys of six or seven racing beside us, as easy in a saddle as on their feet. 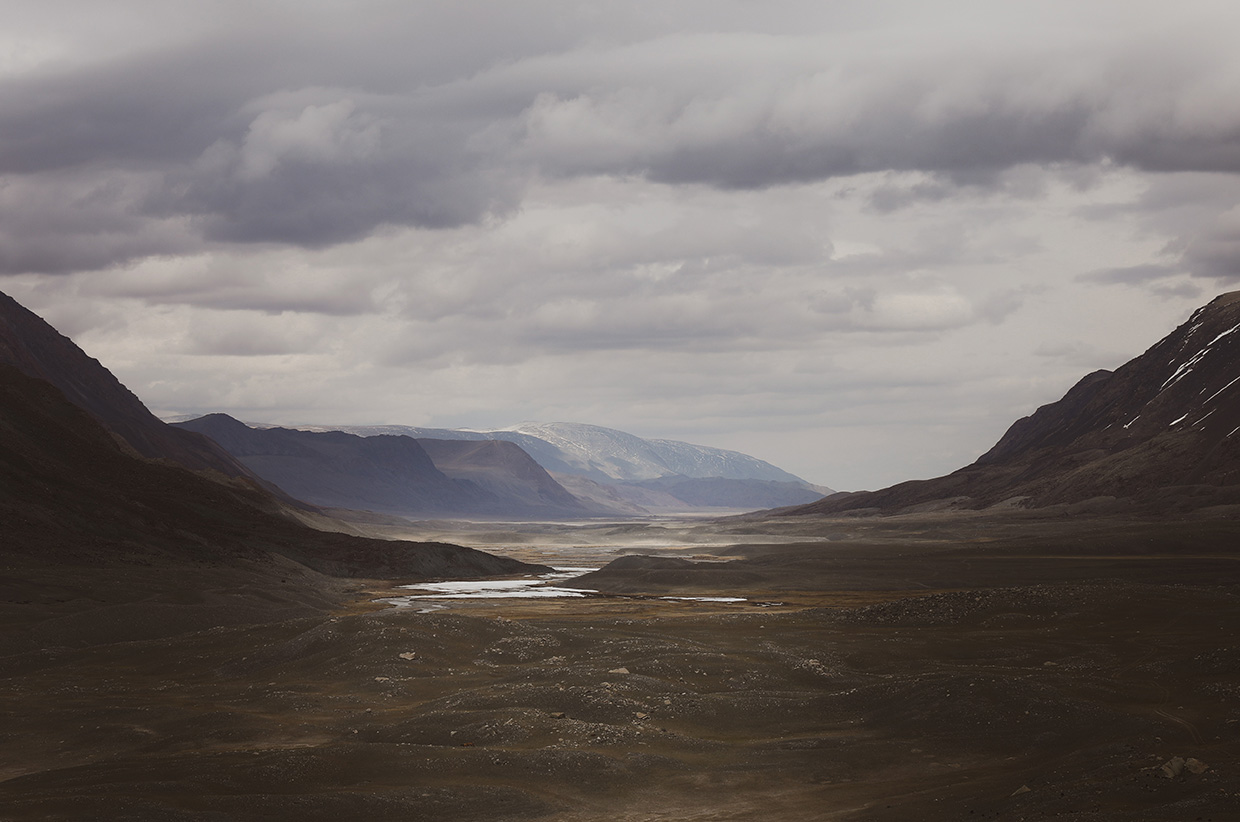 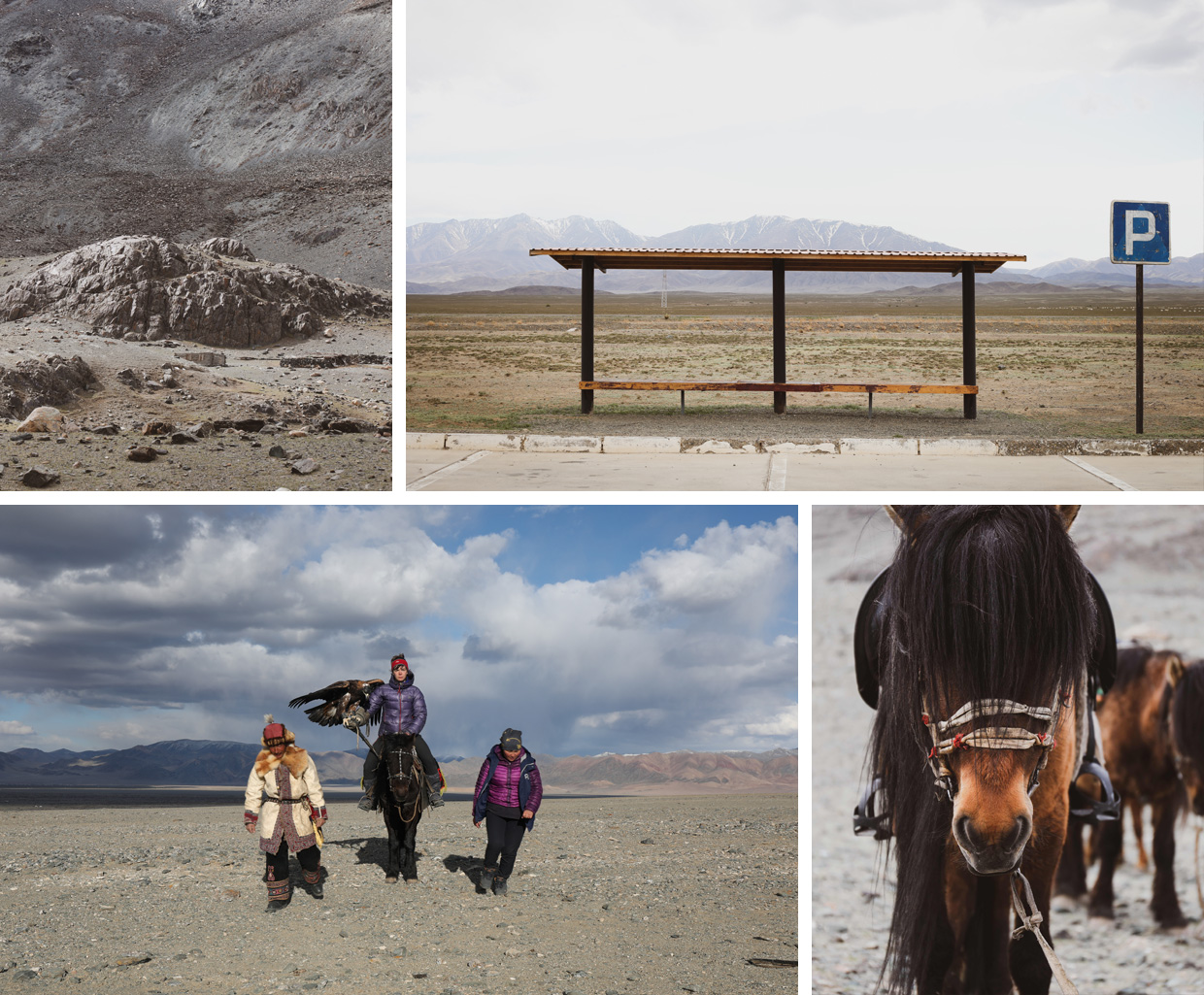 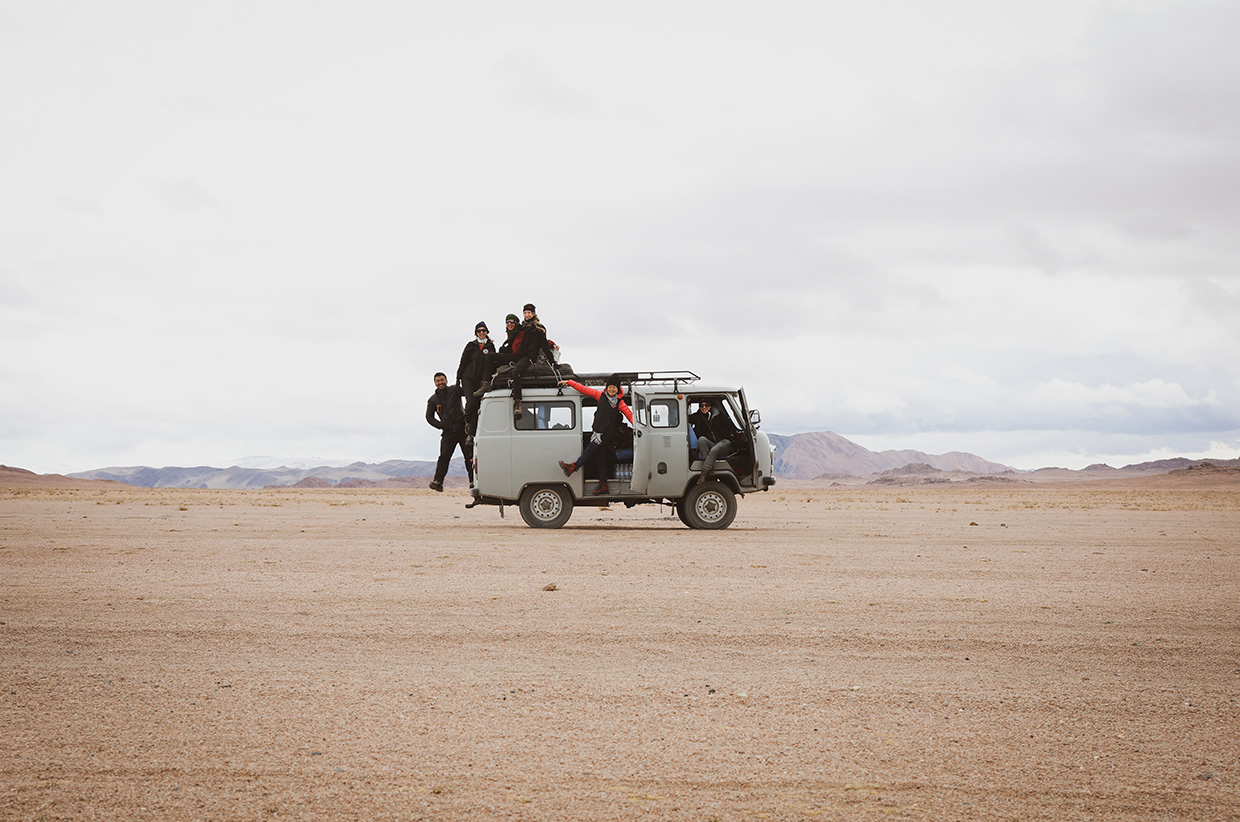 Earlier that day we’d summitted two 3,000m peaks, the landscape before us empty and untouched for mile upon mile, apparently devoid of human presence. I felt proud of our group. On day one I’d filmed them using wing mirrors to put their make-up on, defiant of our new reality; today they were windswept, breathless, and beautiful up in the barren hills. At ease and happy. I noticed a shepherd herding sheep down below. There was his home nestled into a crag, camouflaged into the land. I turned to Nurka, whose family lived across the plain beneath us: ‘How do people live in such total isolation? What do they do for fun?’ She told me they don’t think about fun – life is hard, the climate harsh, life expectancy low. Every day is spent sustaining themselves and adapting to the land. But yes they are happy. I think about how simple and hard and free and tying that nomadic life must be, and realise what I learned out there, from the people I travelled with, met or passed by: each of our lives is hard, messy and glorious, imperfect, uncertain and out of control. But without fail there’s happiness in that. And I have to trust it.

Jen Randall is a filmmaker who makes documentaries about identity and landscape, often focusing on women and adventure. Watch out for the release of her short film of this trip at lightshedpictures.com and follow Jen on Instagram @lightshedpictures and Twitter @LightShedJen.