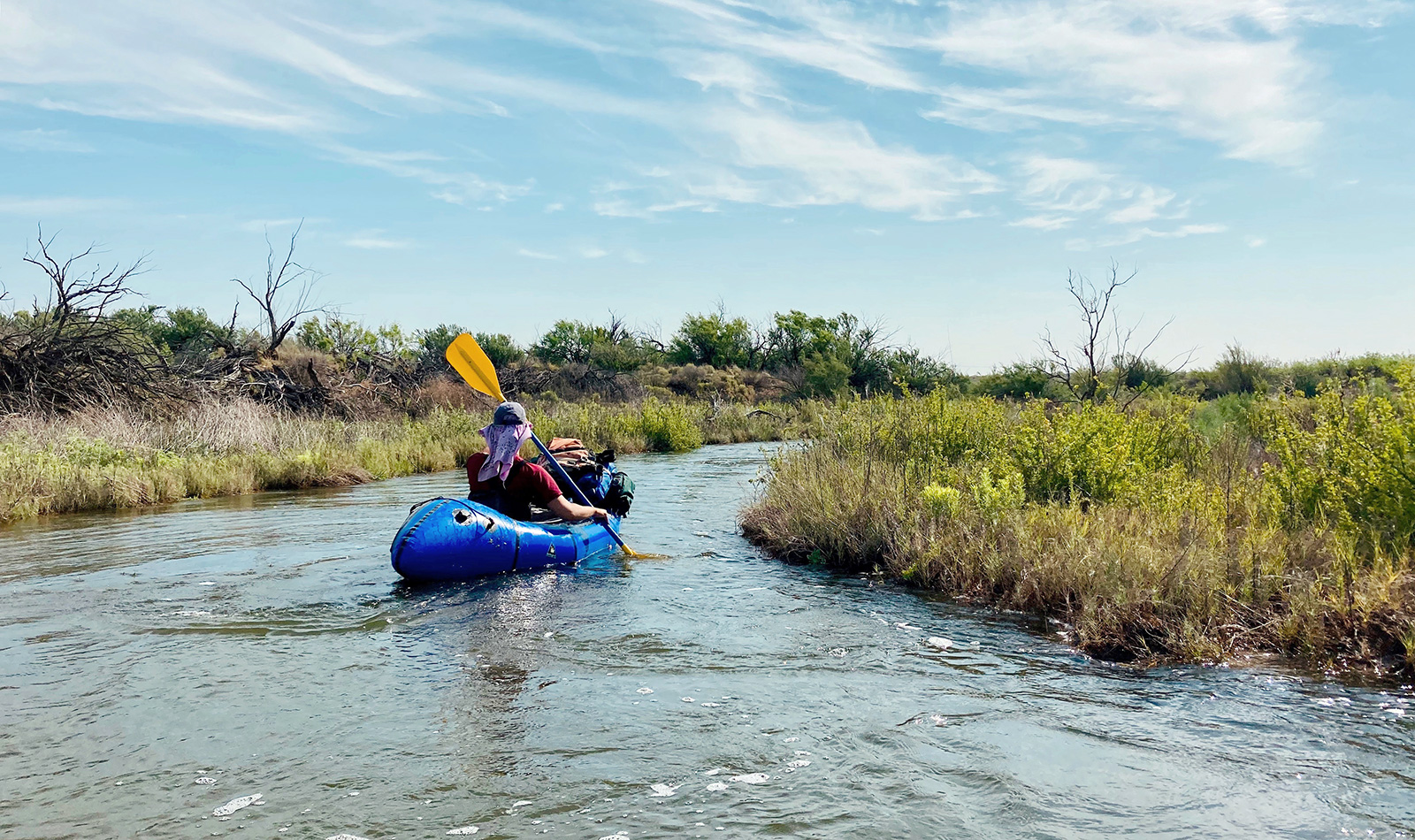 A couple living in New Mexico make a 63-day journey down the Pecos River, starting in the mountains and ending at the US-Mexico border.

Maia collides with a barbed-wire fence just above the water and flips her boat. Unable to paddle to her in the strong current, I frantically look for a way to reach the riverbank. She ejects from her boat; I see her push down. A few wrenching seconds later she appears on the other side of the barbed wire. As she pulls her inflatable packraft to shore, I see it deflate rapidly into a shapeless piece of thin plastic.

It’s the 10th day of our trip and that morning had started like so many others on the Pecos River. We had risen early, starting our day with oatmeal and coffee beside the river, to enjoy the brief coolness before the sun came up and baked the land in shimmering heat. After stuffing and inflating our packrafts we slid into the current and headed downstream. By mid-morning we had encountered a large hydroelectric dam, and Maia and I became separated as we were carrying our boats around it. I couldn’t help feeling a stab of anxiety – we had been together day and night since we started on the river. For 20 minutes all I could think about was finding Maia. It was a relief to finally see her coming down a side gully that she had taken. Back together, we returned to the river below the dam and launched into the swift current, unaware that the barbed wire fence lay just around the bend.

The idea to travel the entire length of the Pecos took form during the long nights of winter. This 926-mile journey travels by boat and foot through sparsely populated terrain in the United States Southwest. The Pecos starts in the Sangre de Cristo Mountains of northern New Mexico, winds through the deserts of Texas, and joins the Rio Grande near the Mexican border. It is a journey that to our knowledge had never before been attempted.

At the end of May, as the snow in the mountains melted and joined the river, we hiked to an altitude of over 12,000ft to locate the source of the Pecos, and then descended until the water became navigable and we could launch our packrafts. We knew our route would soon take us through the dry and remote parts of the Chihuahuan Desert, so while the river still flowed through the mountains we savoured the cooler air and wooded valleys. 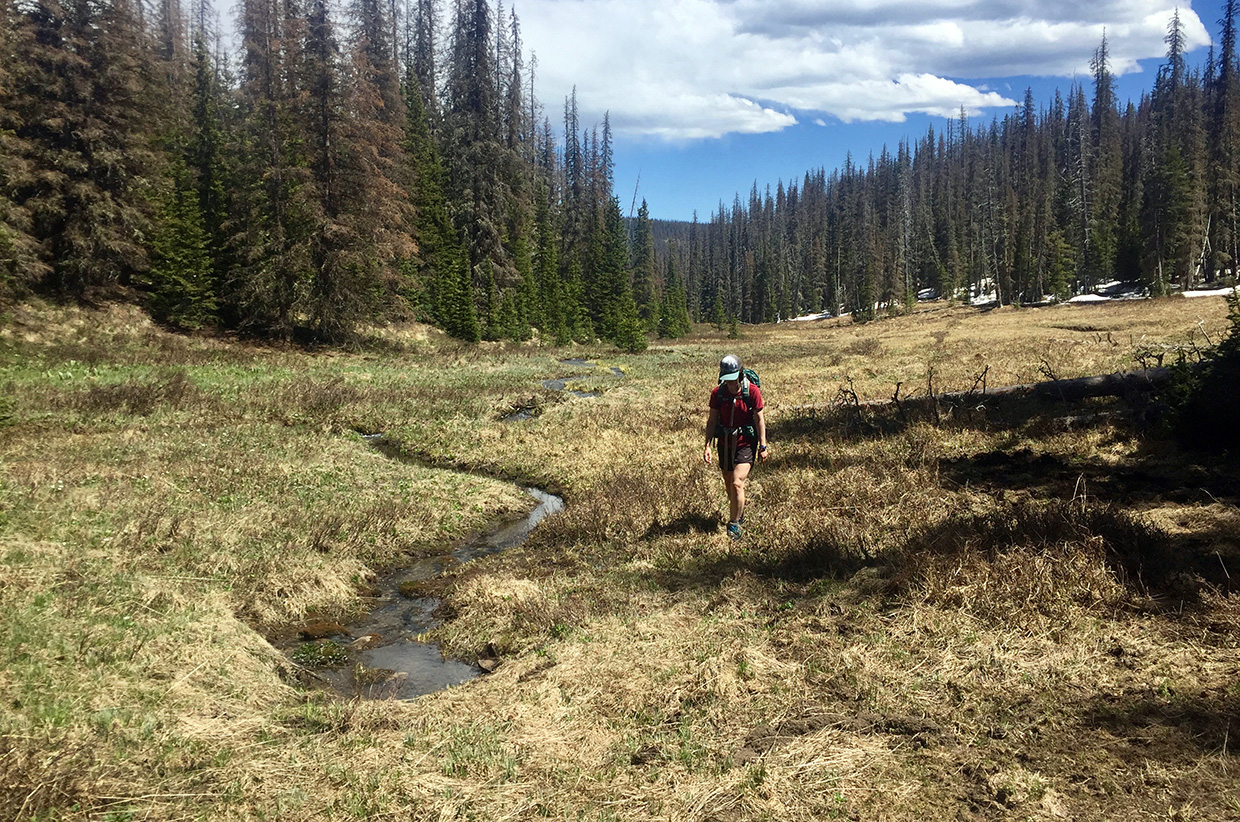 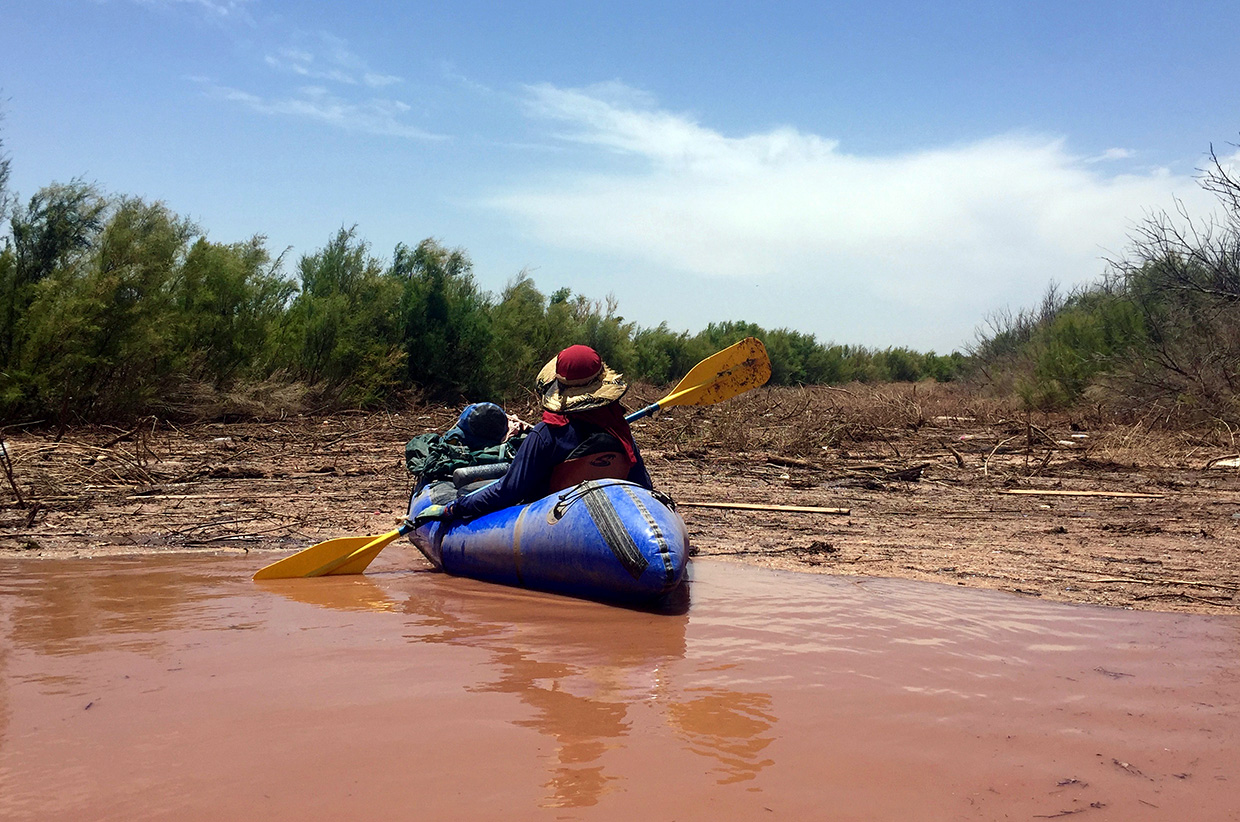 After two weeks of paddling, the challenges of travelling down a little-known river had become clear. Barbed wire hung and dragged across the current, diversion dams used in the centuries-old method of acequia irrigation slowed and siphoned off the water, and the large dams impounding thousands of acre-feet of water shrunk the Pecos to barely a stream. We had chosen the Pecos in part because of these challenges, knowing that we would have to rely on ourselves and each other – and without the meticulous trip report of anyone who had made the journey before.

We had found the Pecos mentioned in history books and geographical articles, but neither said anything about boating. The only reference we found was in an online river guide. After sending the author an email, he wrote back to say, ‘As my dad used to tell me when I wanted something I was not going to get, “People in hell want ice water”.’ His advice was that it ‘would be a great wilderness hike, but leave the boats at home’.

Paddling down a long desert river was a first for us, but our adventure began decades before when I first met Maia in elementary school. When we were 10 or 11 our families rafted down a river together. I remember playing in the willows on the riverbank with Maia – two children splashing in the shallow water. I grew up doing river trips with my family. The Pecos was my back-yard river. As Maia and I grew older, our paths diverged, and for a time we lost touch. We went to different schools after sixth grade and then lived in different towns, states, and regions of the US for the next 10 years. We eventually regained contact in our mid-twenties and moved back to New Mexico together.

A trip down the Pecos was a chance for us to reconnect with one of the rivers from our childhood and to do something that pushed our physical and mental limits as a couple. We knew that we would have to rely on each other – and that it would test our ability to work together through the hardships that lay ahead. I had more experience boating, but once Maia had decided to do something she possessed a single-minded determination to complete it. Together our strengths balanced each other. I navigated the most difficult sections of water, and Maia found the way through and around the many dams, logjams, and walls of cane grass that blocked our path. 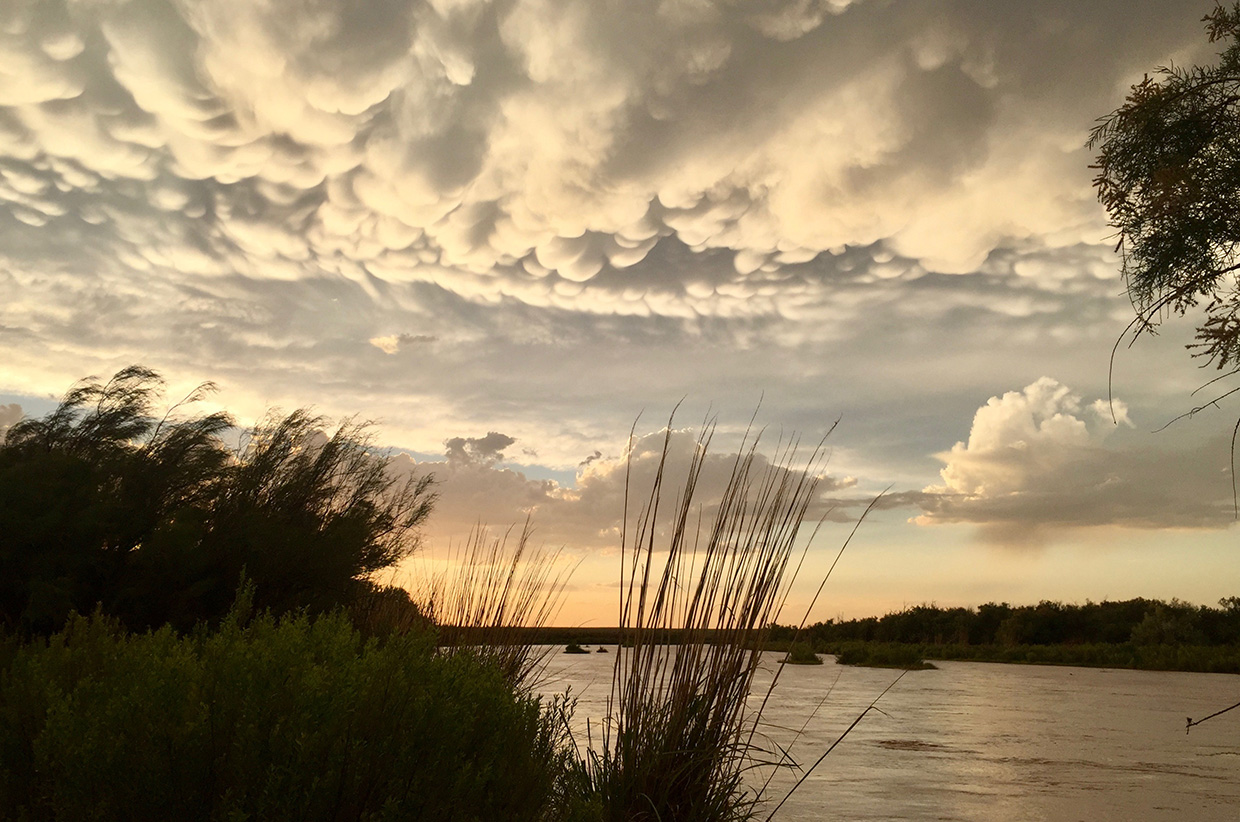 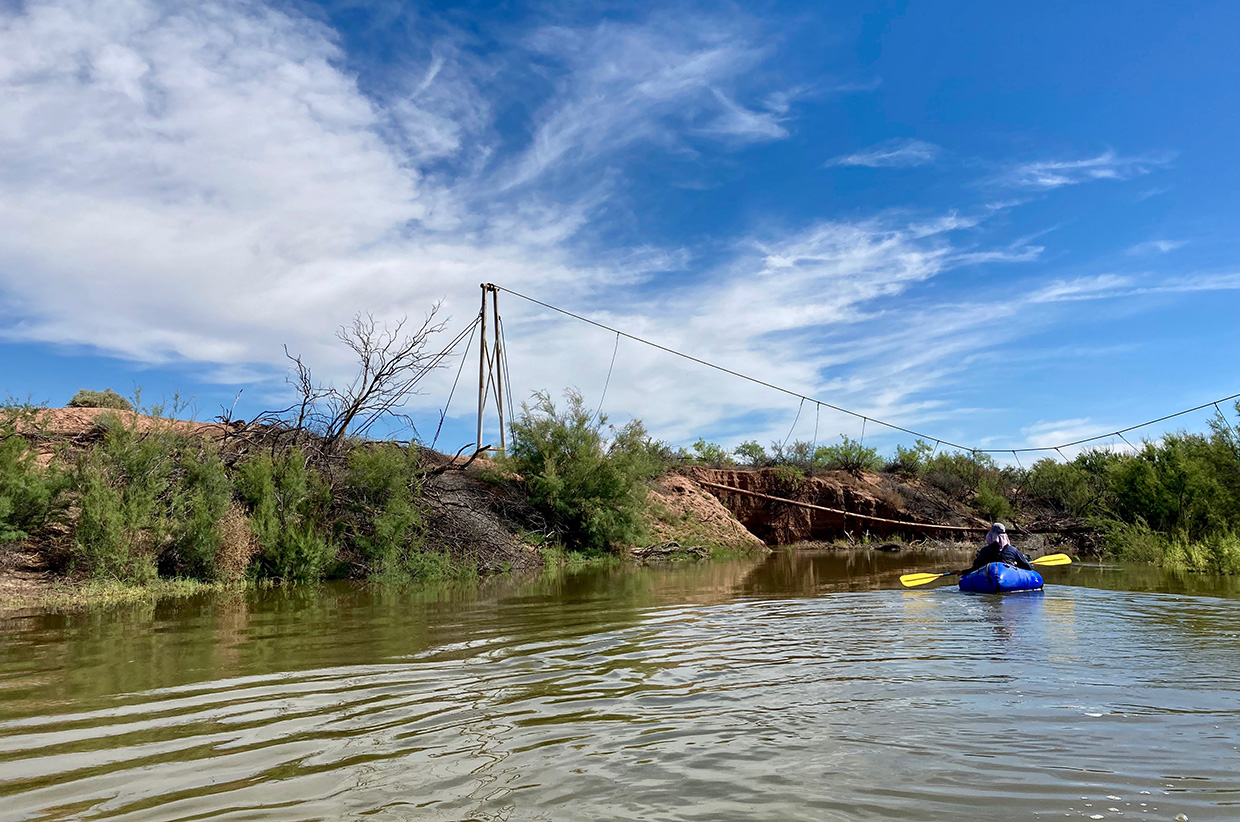 The water became the boundary of our trip, allowing us passage through the land and communities that lined its banks. In the Southwest, the phrase ‘Agua es Vida’ is both literal and cultural. Water is essential to life. It is a right, a heritage, and an active part of the history of this land. The water of the Pecos is used by farmers, ranchers, and by the towns that are built beside it and tap its aquifers.

A few days after we had launched our boats on the water, we came across a rancher’s fence stretched across the river, and the owner standing on the shore. As we jumped into the cold water to navigate around the fence, he quietly walked to his truck and pulled out a shotgun. I felt acutely aware of how vulnerable we were as I lifted the wire for Maia to push and swim her boat underneath. At times like these, I appreciated my northern New Mexican upbringing where encounters with armed landowners were not uncommon. Legally, I knew that we weren’t doing anything wrong. The New Mexico constitution guarantees the right of anyone to travel along any navigable waterway in the state, providing they do not trespass on private land to reach the water, or leave the water when passing through private land. I did not, however, feel like explaining this to the end of a shotgun.

The sound of my breathing grew louder as we struggled in the waist-high water. I could not help thinking how much easier crossing the fence would be on land, but the rancher continued to watch us from the shore. To try and lighten the mood, I finally broke the silence and said to him, ‘You have a nice spot here – I didn’t know what to expect on this part of the river.’ He relaxed after I had spoken, lowering his gun to the ground, and seemed to decide we weren’t a threat. By the time Maia and I had both made it under the wire, he was giving us advice on what we should expect downstream, and other fences to be aware of. Respect was the price of passage. By showing respect for the landowner and his land, for the river, and for the thorns of the mesquite, we were allowed to pass through. Folk were often suspicious until they figured out why the hell we were out there – but then they were interested, generous, and polite.

The people we met who lived along the river knew it was there, but had stopped visiting its muddy waters years ago. They said it wasn’t the same any more. They said the people living upriver had used up all of the water. That the salt fields and fracking for oil had poisoned it. They said the fish they spent their childhoods trying to catch had died or been killed. They said it with a sad chuckle or quiet glance that spoke of something long gone. But one thing always seemed to matter – the Pecos River had once been great. 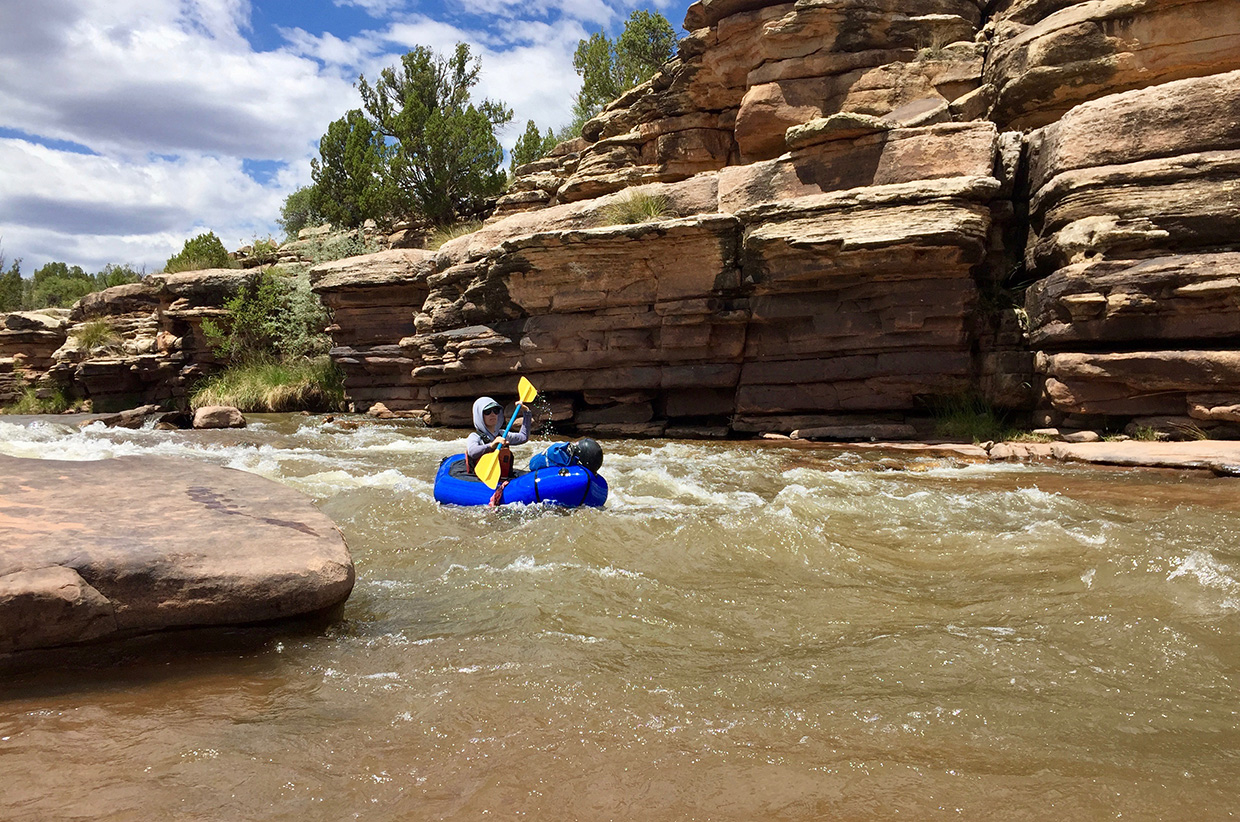 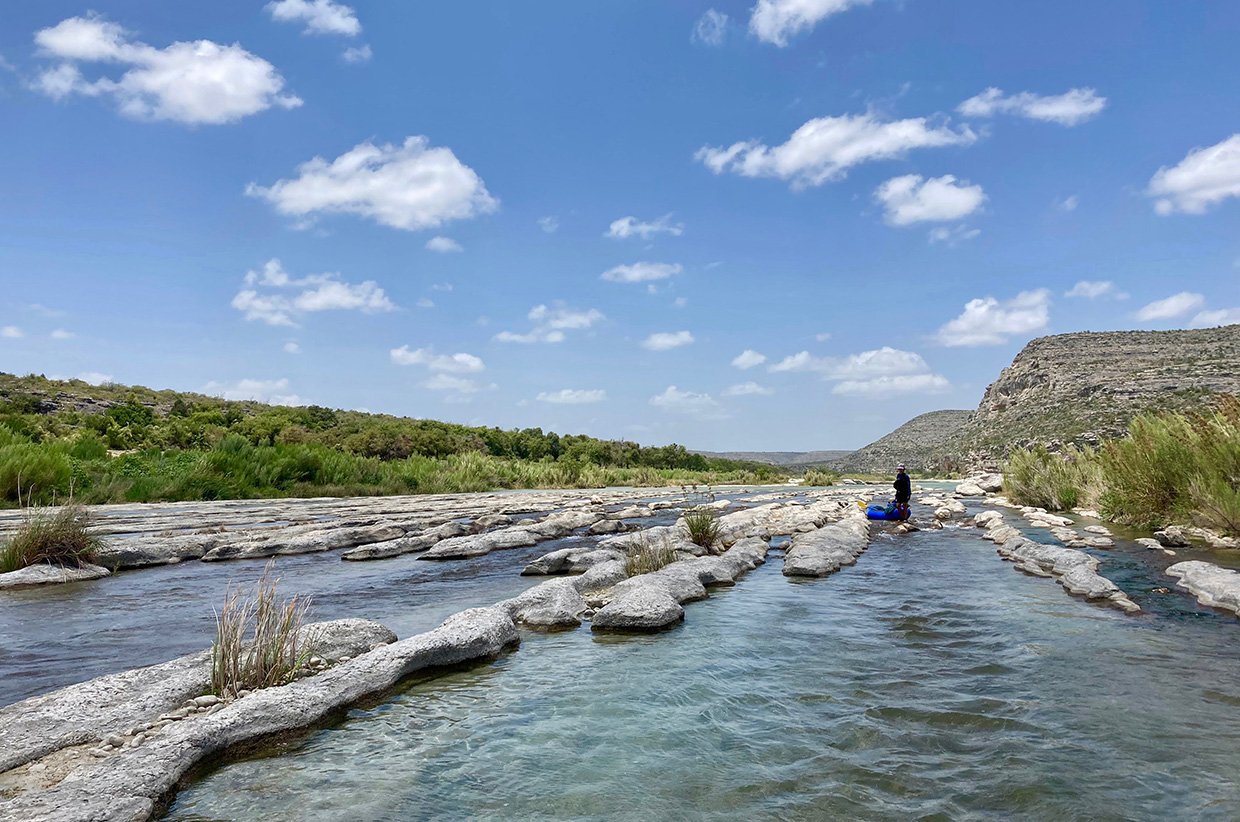 We met many more people along the river: a grandfather who gave us a ride in his pickup, a New Mexico state engineer who allowed us to camp in the closed access beneath a dam, and a family who shared their food with us after we came across them in lawn chairs placed in the middle of the river. We moved slowly down the river, averaging 10–15 miles a day. The heat and wind were always present, but the level of the water was what slowed us down the most. Some parts of the river were so shallow, with such slow currents, that it was easier to leave the river and walk along the bank. Even with these challenges, we continued to cover miles and we made our way south. After two months it no longer mattered why we had chosen to come here – the river simply drew us onward. Our days began to take on a dreamlike state. The presence of the water always felt whether we were asleep or awake.

The water never slept. It moved steadily, persistently, across the dry, flat landscape. A shimmer on the parched land. I often wondered at how this thin line had carried us hundreds of miles, its current ponderous, its path twisted like a snake. Pecos means ‘crooked’ in the Puebloan Keresan language, and the river is known as the ‘most crooked river in the west’. The river was often hidden, sliding through the tamarisk and creosote silently, below the view of those who passed within 100 yards of it. If you knew what you were looking for, you would see a line of brush and green plants: the unmistakable sign of water in the desert.

As we neared the end, the current slowed and then stopped. The river turned into a reservoir of slack water, backed up for dozens of miles by the Amistad (‘friendship’) Dam, managed by both the United States and Mexico. On the last day of paddling, we crossed under a high bridge that marked the end of the Pecos. We both had tears in our eyes as we hugged. That night it rained – a long deep rain that poured from the sky and filled the river until it overflowed its banks. It had rained twice in the 63 days it took us to reach the Mexican border. The monsoon rains had arrived only hours after we finished. The next morning, we packed up our boats and drove 10 hours back along the river: a trip that had taken us two months to boat.

Travelling down the Pecos took us back to the landscape where Maia and I first met, and connected us to the land and the communities living there. Our interactions with the people who lived along the river were unexpected and overwhelmingly positive. These small moments, overcoming unforeseen obstacles, and the rugged nature of the Pecos, formed the backdrop for our trip. In the end, we accomplished what we set out to do – travel the entire length of the Pecos by our own means. Now, when I wake in the predawn darkness and hear the sound of water, I think about the Pecos. It is a river that I cannot forget: it challenged and carried us along a journey that will forever be a part of our story.

The Pecos River has been the focus of one of the longest interstate water lawsuits in the American West, the infamous Texas v. New Mexico case. It has been to the US Supreme Court multiple times and continues to be a contentious issue between the two states. The case is described in High and Dry by the University of New Mexico professor emeritus G. Emlen Hall. 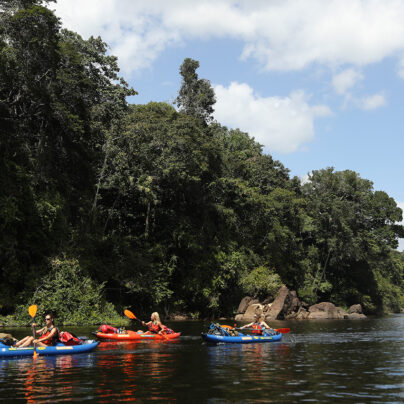