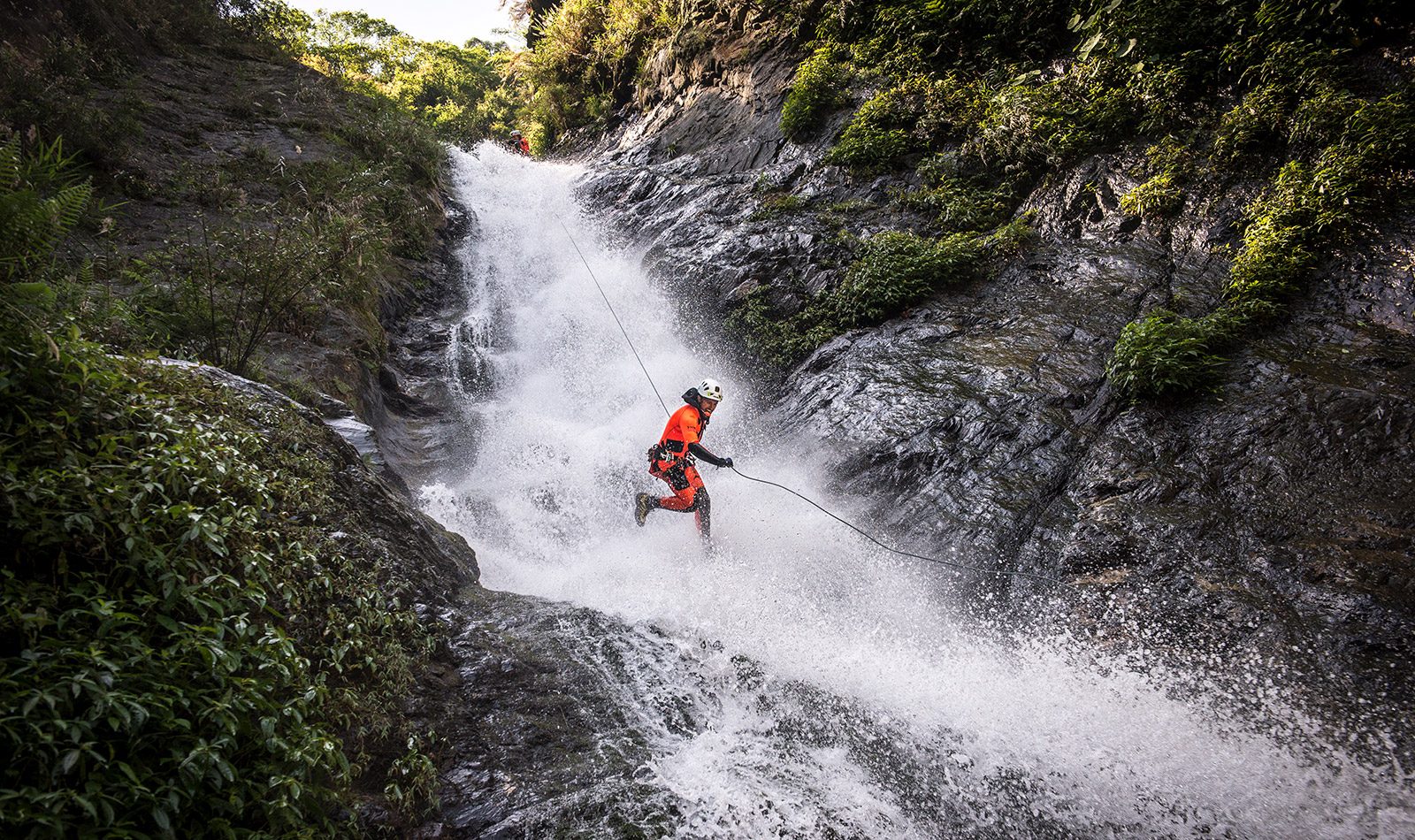 I watched Akira throw powerful strokes. In other circumstances, each muscular thrust would have powered him forward through the water, but here he was helpless against the swirling, frothing mass of white and blue. He seemed to relent, perhaps realising he wouldn’t reach the other side, and allowed the current to whip him around the bowl like a spider caught in the drag of a plughole. The water roiled and foamed, pure white with aeration and more like milk boiling in some arcane cauldron than the river that had brought us to this point. It mimicked the turmoil inside me. The high and vertical walls of the Malishan Canyon are smooth and black, and echoed the white noise of whitewater, interrupted only occasionally by the reverberations of rockfall and the almost alien sounds of our shouts.

At that moment, it felt unlikely that any human being had set foot here before us, and, if we were to get out, it was essential that Akira reached the other side of the pool, where a ledge above a waterfall marked the end of the deep canyon slots and the broadening of the river. Again, with momentum behind him, Akira took in a long breath and threw all his remaining energy into reaching the exit.

This last of the technical difficulties was the biggest challenge we had yet come across in a trip already defined by the challenges we had overcome. We hadn’t even intended to explore the Malishan when we arrived in Taiwan two weeks earlier. Our original objective was to take on the first canyoning descent of the Qia Kan. It would have been the longest canyoning expedition in history, but it wasn’t to be. Our multinational team of eight met as a group for the first time in northern Taiwan and played a waiting game with the weather. Days passed, and more and more rain fell, until the water levels in Qia Kan were at an unprecedented high. There was no way that we would be able to make the descent in those conditions, and time was running out. We needed to find another objective, and quickly. The south of the country looked as though it had avoided much of the recent rain, so we drove en masse to the Kaohsiung District, home of our new objective: the Malishan Canyon.

Had we attempted this expedition just two months earlier, we’d have been able to drive almost to the head of the canyon. Yet eight weeks before our arrival, a huge earthquake of 6.4 magnitude tore the very fabric of the land. Massive landslides threw our access road down the hillside. In the city the earthquake tragically claimed the lives of 114 people. We knew that this would make accessing the canyon that much more difficult, but there were local rumours of a new trail already beginning to make its way through the earthquake debris and forest. Shouldering packs weighing as much as 33kg, laden with canyoning hardwear, ropes, camping equipment and food for the trip, we struck out on foot, directly up a 1,000m slope to a knife-edge ridgeline that we had to follow to reach our goal.

At that moment, it felt unlikely that any human being had set foot here before us, and, if we were to get out, it was essential that Akira reached the other side of the pool, where a ledge above a waterfall marked the end of the deep canyon slots and the broadening of the river. 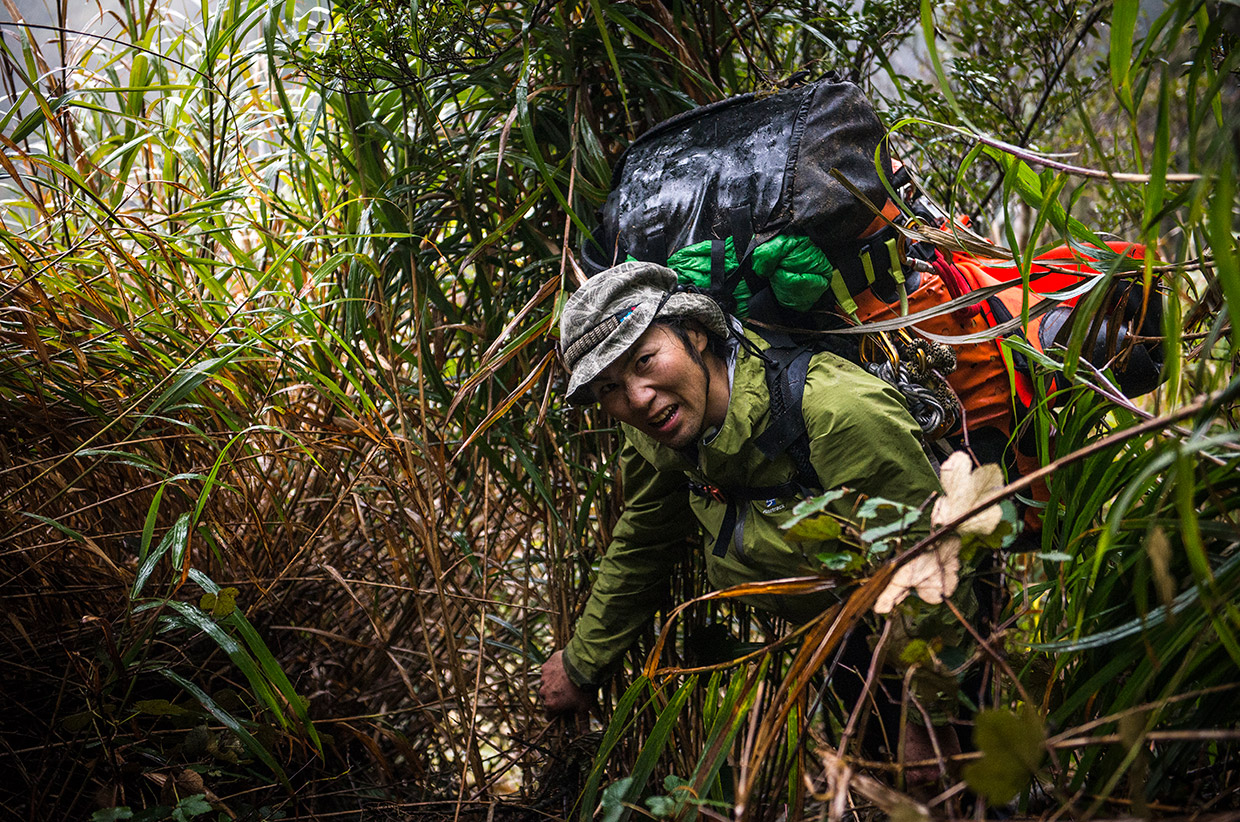 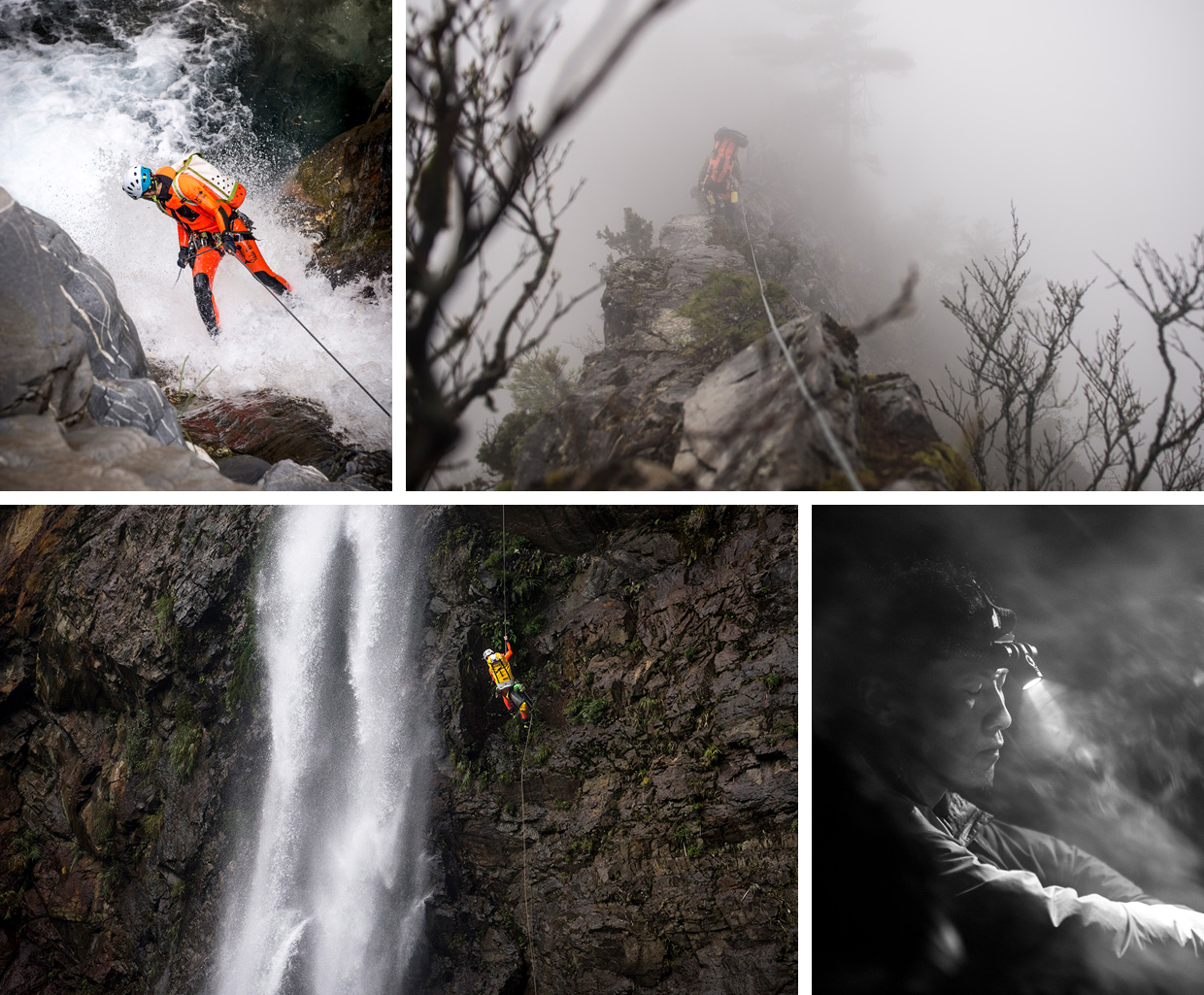 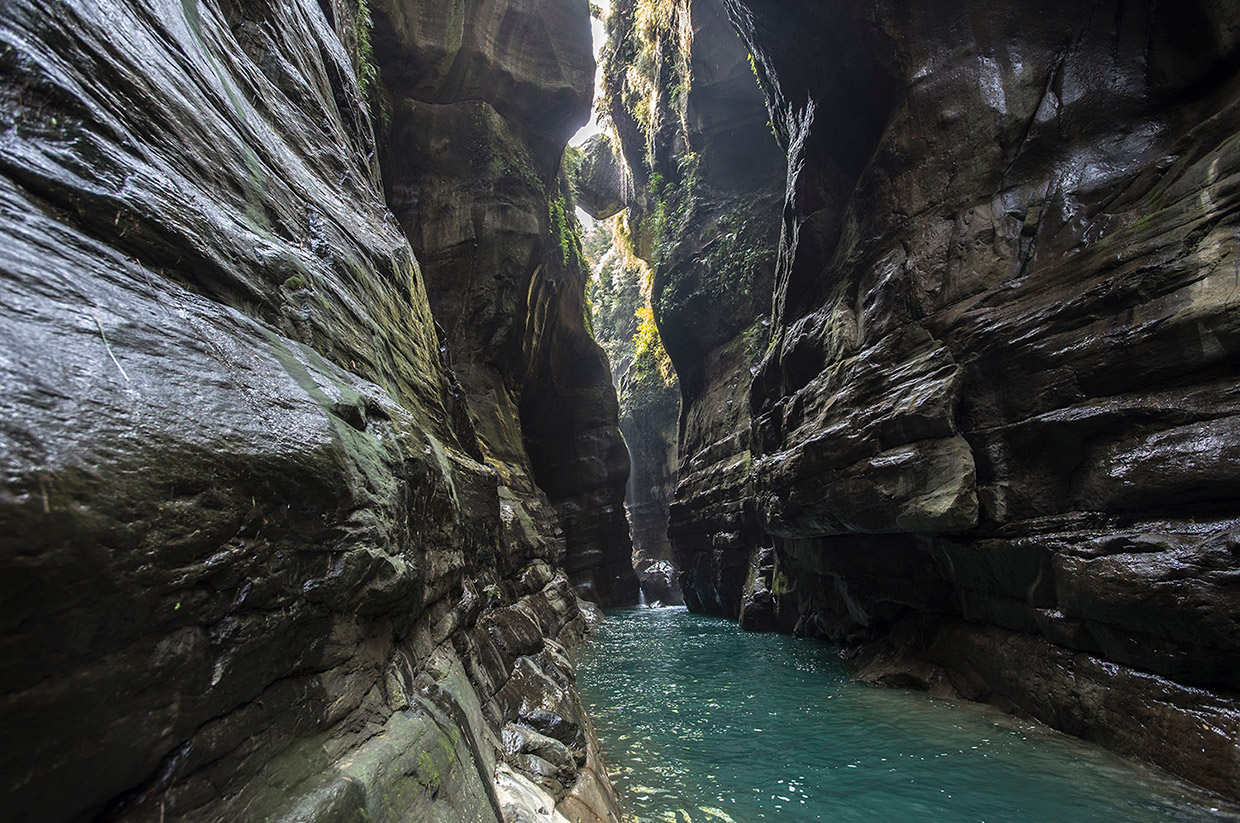 We fell into a rhythm, working more efficiently again, eagerly sharing stories with wide eyes on the occasions our groups met. The canyon was slowly revealing itself. We found Malishan to be a special place, worthy of the energy we were bleeding in this exploration.

After battling all day, we reached the ridge just as the weather closed in. The small white signs that had guided us so far seemed to have disappeared, and when we eventually found them after much searching, they took us along increasingly precipitous terrain. Darkness came quickly and entrapped us on a rocky outcrop. We bivvied where we were and tried to ignore the lingering earthquake aftershocks. Although we expected to reach the canyon on day two, yet more difficult terrain hampered us. Progress was slow and careful. We were forced to rig a Tyrolean traverse, each pulling ourselves across a gaping drop, legs dangling in the low clouds. Finally, we reached the river as the day drew to a close, finding shelter in a ramshackle hut above the water. It offered the opportunity to light a fire to dry out our damp clothes, and some time to recuperate before the expedition began in earnest.

Entering the canyon, we had planned to work quickly as a team. We split into three distinct groups: those pressing on and rigging the route, those in the middle relaying messages, and those at the tail stripping ropes. It didn’t take long before Malishan steepened and narrowed, funnelling the river into high waterfalls down polished cliffs, mottled with lush, green foliage. The team started to build belays, but were hampered by the extraordinarily hard rock. Our drills were useless – we had to rely on pitons. This took time and our otherwise efficient teamwork quickly disintegrated at bottlenecks. We had 300m to drop over five separate waterfalls and the day rushed away from us like the water that surged endlessly below, above, and around. Those waiting shivered under foil emergency blankets while, far below them, the riggers battled with marginal gear placements and loose rock. I finally made it to the top of the last abseil as darkness was falling. Describing the anchors as marginal was in fact generous, but with rainwater pouring down the canyon sides, I lowered off. The bivvy that night was not comfortable, but I slept well because I was mentally exhausted.

The next day, we knew we had to move more quickly. The immediate difficulties were as challenging as the ones we had already covered, but we were behind schedule and the promise of more open ground and a comfortable bivvy drove us on. We fell into a rhythm, working more efficiently again, eagerly sharing stories with wide eyes on the occasions our groups met. The canyon was slowly revealing itself. We found Malishan to be a special place, worthy of the energy we were bleeding in this exploration.

Everything that made the canyon so incredible, such a wonderful challenge, also slowed our pace. For all the camaraderie of a large team, it simply took us longer to cover ground. We didn’t make our planned camp; an emergency bivvy beckoned. We lay on huge slabs of loose rock, hexagonal tiles precariously sitting on each other like toppled dominoes. They hung over the water, not even a metre above us. All around us the clack and thunder-crack of plummeting rocks scratched at our nerves, invisible gunshots in the night. 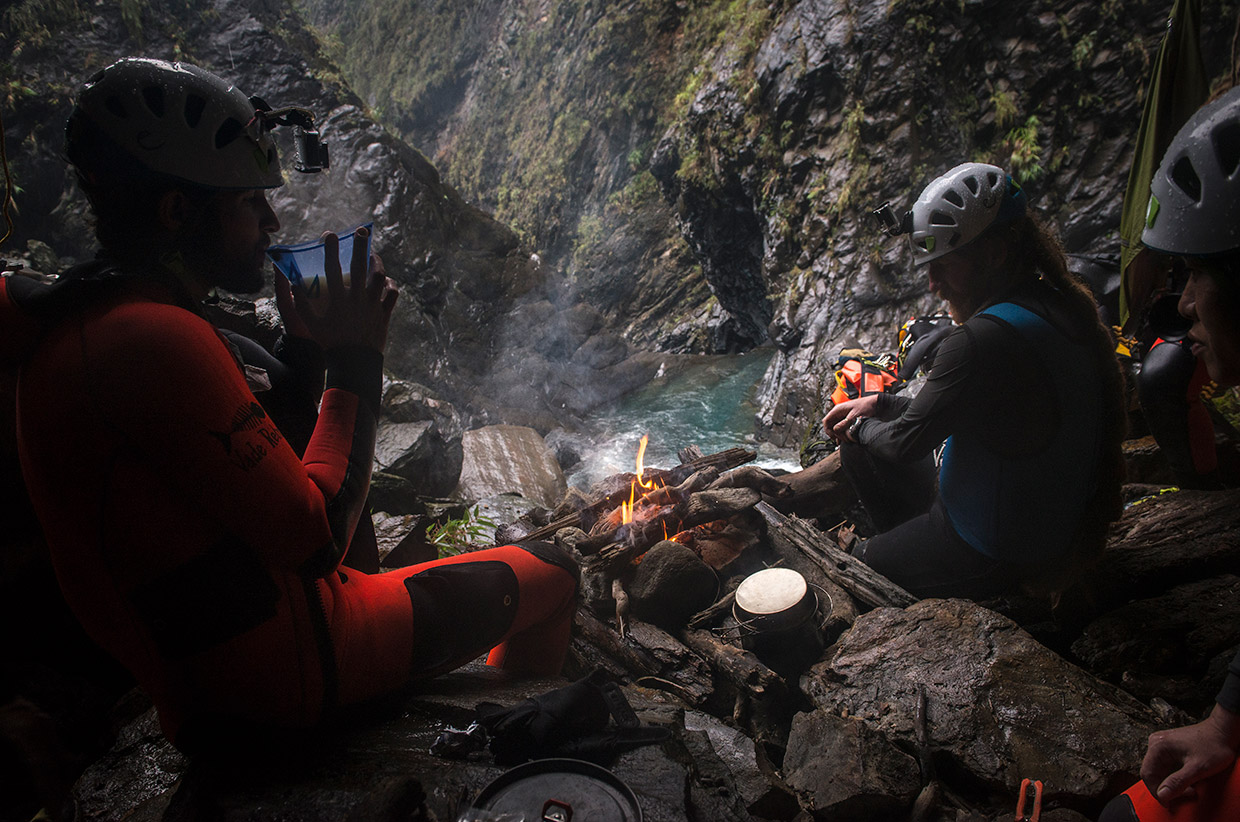 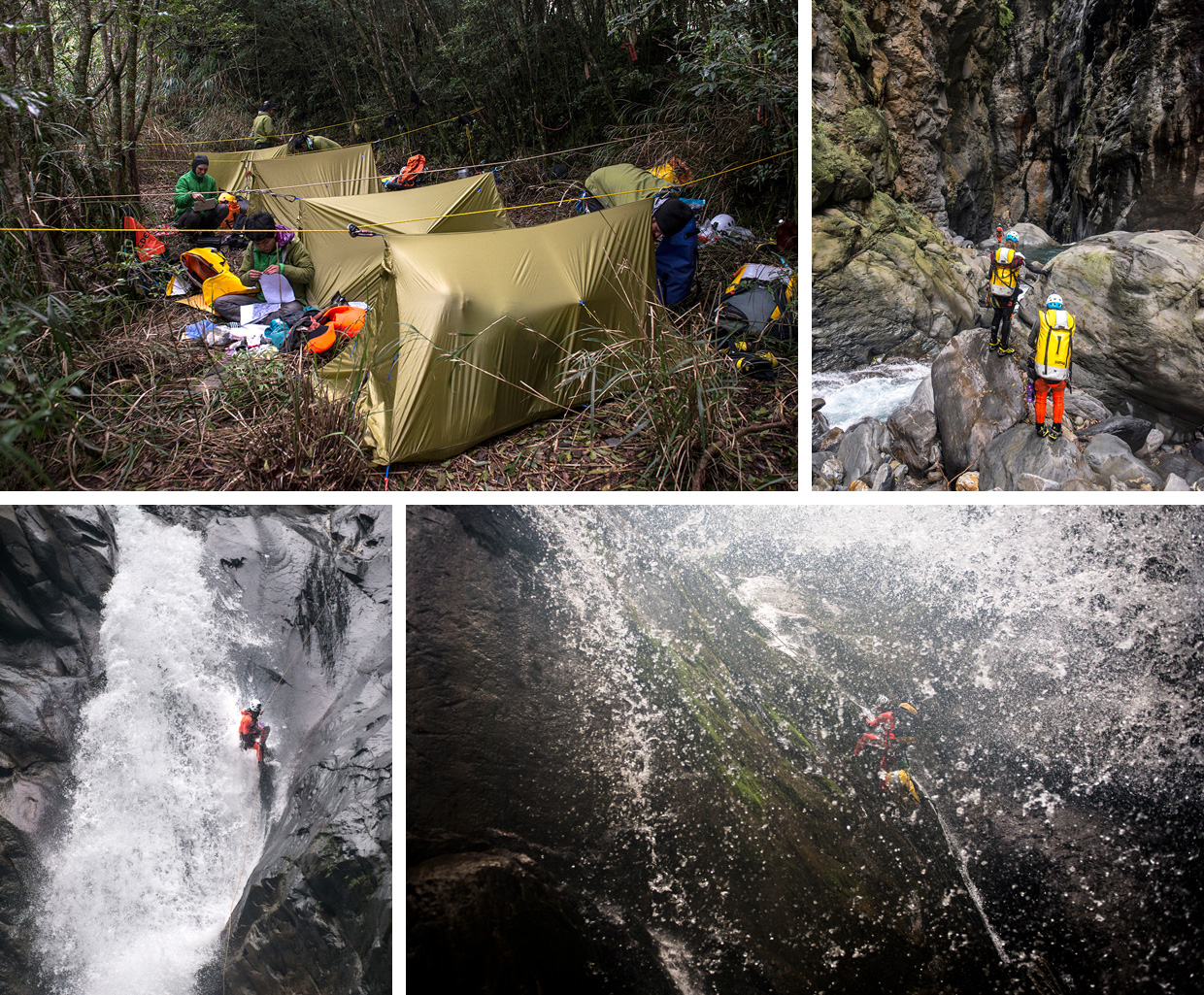 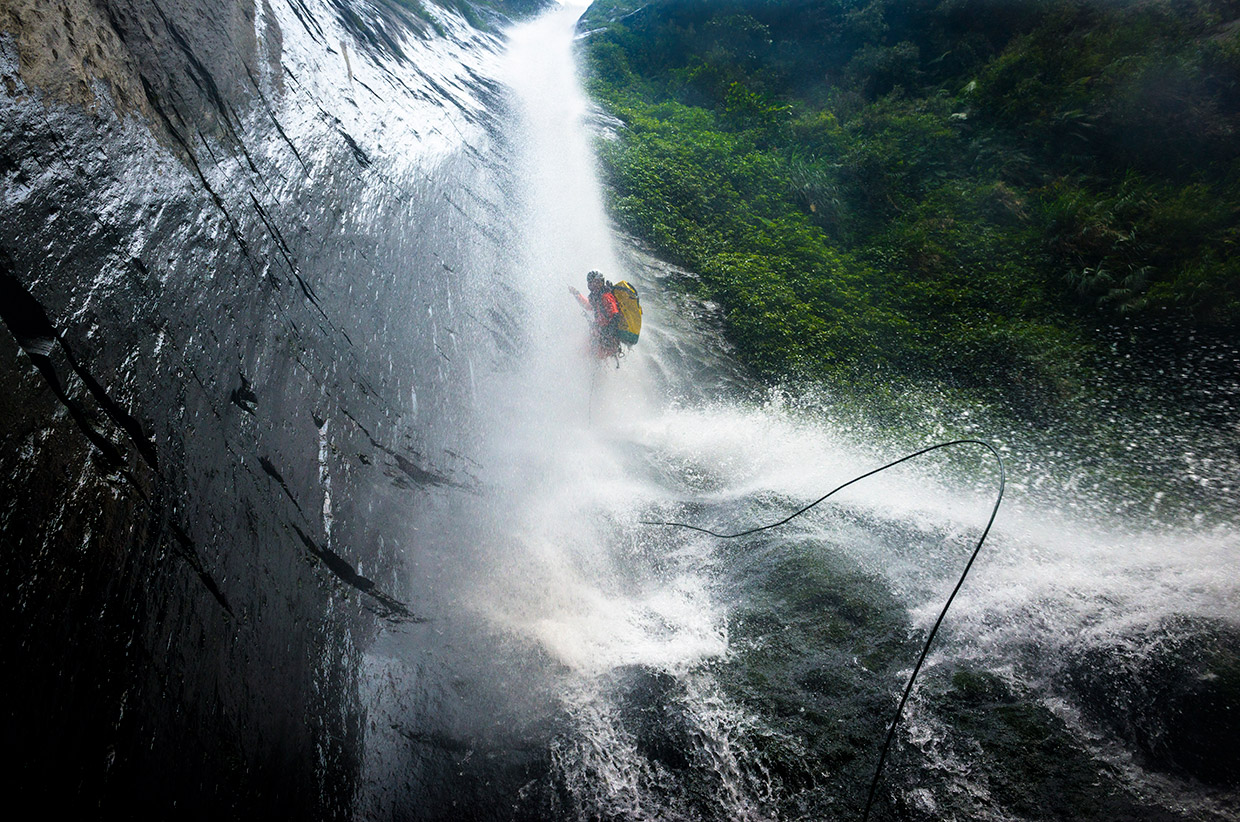 I’m not sure if we needed early alarms the next day. Most of us didn’t see sleep. We packed by the glow of head torches and were ready to move at first light, prepared for another day of both technical and mental challenges. Not more than a few twists of the river later, the canyon opened out. The claustrophobic walls mellowed and light flooded in. We took the opportunity to crack open the satellite phone and check the weather forecast. Weather predictions were rarely accurate unless rain was forecast, and we were due rain – lots of it. While we were just one gorge away from clearing the technical difficulties, we knew that gorge would be harder and more dangerous than anything else we had already tackled. We absolutely needed to clear it before the storms hit.

Things started well. The gorge tightly funnelled the water’s flow down a 15m drop. It was the first time we’d been able to play with the canyon, rather than cautiously shadowboxing with it. We leapt into the deep pool below and were carried downstream. Before long, things steepened once more, and with that came waterfalls, more abseils, and the need for care and process. By now, we moved as an efficient unit; or we did until we reached a wide pool with overhanging sides. The water was funnelled tightly into it, and there appeared to be only one exit. Akira was our strongest swimmer. We rigged his safety line and stood, watched, hoped, as he dived into that thunderous, swirling cauldron.

Even with the vortex’s slingshot, Akira once again missed the exit. The storm was no longer coming. It had arrived. The water started to discolour as runoff joined the flow. The water level rose before our eyes and Akira, almost completely spent, climbed out to join us. Like it or not, we would need to emergency bivvy once again. Remarkably a cave 20m above the river offered us shelter and provided just enough room for all. It was full of dry driftwood which allowed us to build a fire. It also acted as a very real reminder of how high the river could reach. Despite everything, we found comfort in this camp. The respite allowed us to gather thoughts and rethink our plan of attack.

The following day, the river level was high, but not as dangerous as we had feared. Instead of trying to fight the flow, we used it to our advantage, setting up a floating anchor system. The weight and force of the water dragged a tethered haul bag over the exit. Once again, Akira would enter the water, but this time with a line to guide him. It was far from easy, or free of risk, but Akira had found his element. Perhaps he had used the night to rethink his approach, or perhaps his resolve not to fail was even firmer. Whichever it was, he powered through the water, lithe and perfect, exited the far side, and scaled overhanging and technical ground almost with ease. When finally safe, he let out a primal scream, loud above the background roar of water and our own excited shouts.

We cleared the canyon that day and hiked out. A ‘short’ walk became 14 hours on our feet. Anywhere else, this might have been too much, a cruel sting in the tail, but after everything we had already overcome, we expected nothing less.

Even with the vortex’s slingshot, Akira once again missed the exit. The storm was no longer coming. It had arrived. The water started to discolour as runoff joined the flow. The water level rose before our eyes and Akira, almost completely spent, climbed out to join us. Like it or not, we would need to emergency bivvy once again.