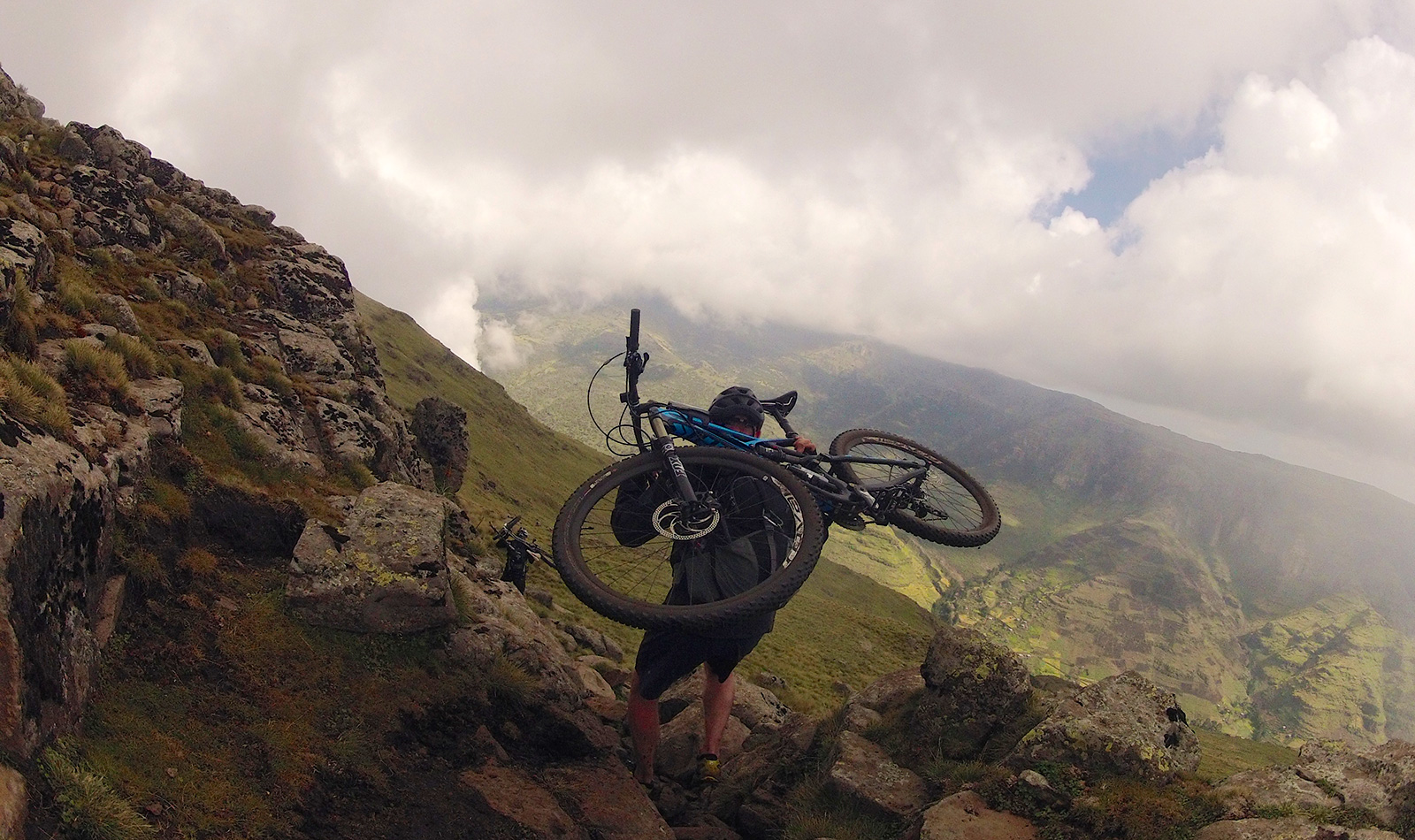 I notice a large flat rock kicking out from an escarpment. Naturally, I accept its free invitation to take a seat for a 180-degree view of Africa’s largest continuous mountain range, the Ethiopian Highlands. As I swing my legs over the edge of the rock, clouds hurry like the clappers underneath my feet, deceiving my senses and making me feel as if I’m flying on a gigantic, magic rock.

It’s October and the rainy season has left behind an explosion of feathery flora. A panorama of dark-stepped basalts layered with shades of brown and purple stretches out as far as my eyes can see, fading into a haze of watercolours. Rocket-shaped pinnacles created by lava eruptions top the mountain range’s eclectic features, which have been shaped over 70 million years by weathering and erosion.

I am on a mountain biking expedition to search for the best single-tracks in the Simien Mountains, a World Heritage Site in the northern part of the Ethiopian Highlands. To me, the Simiens seem to have multiple personalities: sometimes they look like the Alps cross-pollinated with the Andes; at other times they resemble an elderly relation of the Grand Canyon who has settled for a snooze under a great green threadbare blanket.

Formations appear to pop up out of nowhere as if carved by an eccentric sculptor. I promise there are no magic mushrooms growing on my magic rock but, from where I’m sitting, I can make out the shape of a bent witch’s hat, a dented trilby and a deerstalker hat with the flaps-down. Or perhaps the altitude has just gone to my head.

It’s early in my trip and I’ve already had some memorable moments. I’m here with seven other people to explore these mountains. The word ‘explore’ may seem over-egged for an area that gets around 20,000 trekkers a year, but our group are on mountain bikes – not feet – to pedal the remote, rough and often-rocky hiking route from Sankabar to Adi Arkay. On the way, we aim to summit Ras Dashen, Ethiopia’s highest peak, at 4550m.

It’s October and the rainy season has left behind an explosion of feathery flora. A panorama of dark-stepped basalts layered with shades of brown and purple stretches out as far as my eyes can see. 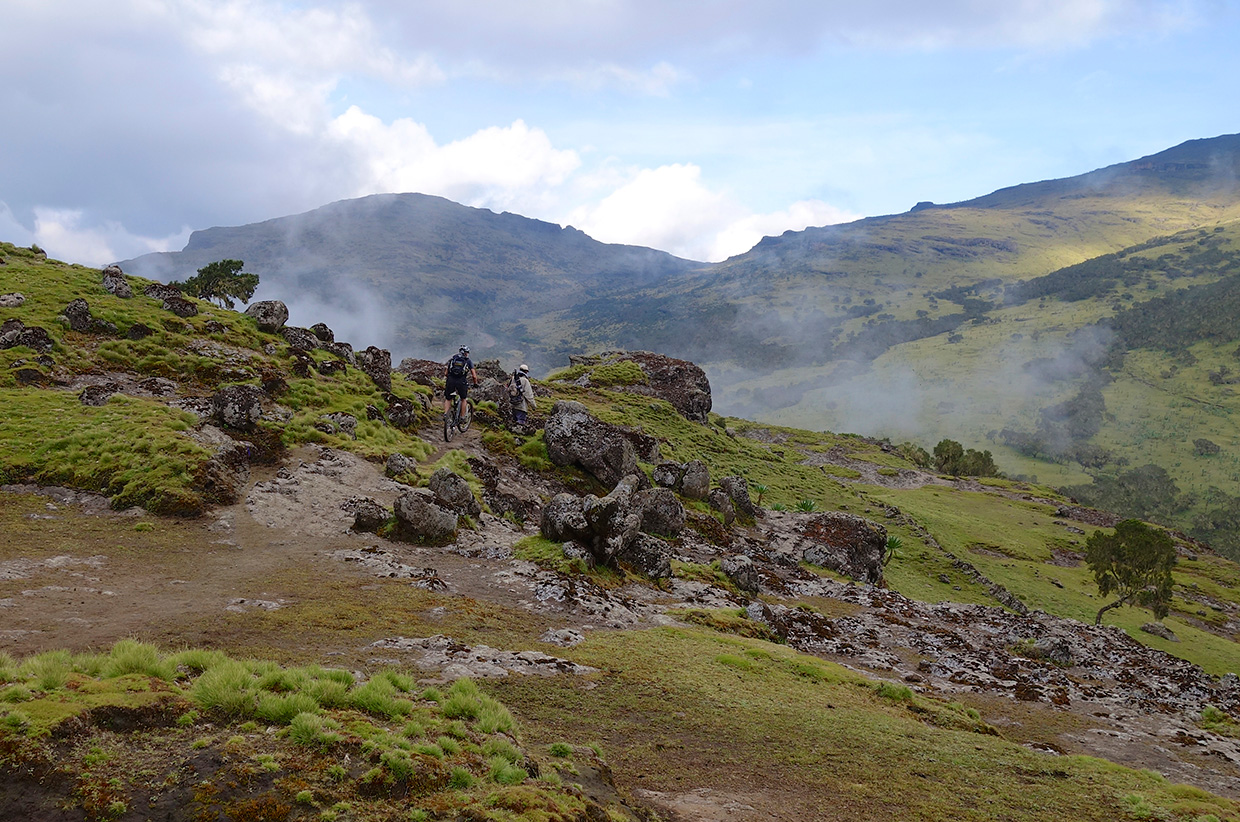 Our nimble support crew ran down mountainsides at breakneck speeds alongside us, while shepherd children wearing animal skins scrambled their way up in a Spiderman fashion.

Our eight-day route will ascend almost 7,800m and descend 8994m – more than the height of Everest. We will ride around 12 miles per day, camping at night where national park rules permit. The distance we have to travel in eight days isn’t great, but we will be slowed by river crossings, high altitude and sections of the trail where we’ll have to carry our bikes, including the scramble up Ras Dashen. On top of that, we need time to set up camp each evening, carry out bike checks, have an optional rest day and, of course, enjoy crucial banter-and-bonding sessions so it makes sense to build in extra time as a contingency.

On our first day, I realised what a novelty mountain biking is in this area. As I assembled my bike, one of our guides, Getch, said to me: ‘That’s a nice bike.’ ‘Thanks’, I replied. Where’s yours?’. ‘I don’t have one, I’ll run,’ he replied, which left our group scratching our heads about exactly how this arrangement was going to work.

Both our guides and the local people seemed confused about why we wanted to ride bikes at all. They understood our longing to see the beauty of these mountains and the endemic wildlife, but why us ‘rich’ people wanted to make it hard for ourselves by hoofing bikes through rivers and up mountains for fun was beyond their comprehension.

But once we started riding, our guides began to understand the appeal as they watched our faces light up and crack into laughter while we hurtled up and down the tracks. Our nimble support crew ran down mountainsides at breakneck speeds alongside us, while shepherd children wearing animal skins scrambled their way up in a Spiderman fashion. It was silly of me to expect my bike to be any match for people who grew up running on almost vertical slopes. At the end of our first day, we all understood each other much better.

Ethiopia is a diverse nation. Its population of 95 million is made up of 80 different cultures, all with their own codes and languages. Ethiopia suffered a five-year Italian military occupation under Mussolini, but it has never been colonised, a fact that its people are fiercely proud of. The country, which is known as ‘the cradle of humanity’, gave us ‘Lucy’, a 3.2 million-year-old human fossil, whose discovery rewrote the story of human evolution. And imagine how much grumpier the world would be without coffee! Although still listed by the UN as one of the world’s poorest nations, Ethiopia is rich in history, uniqueness, culture and characters. 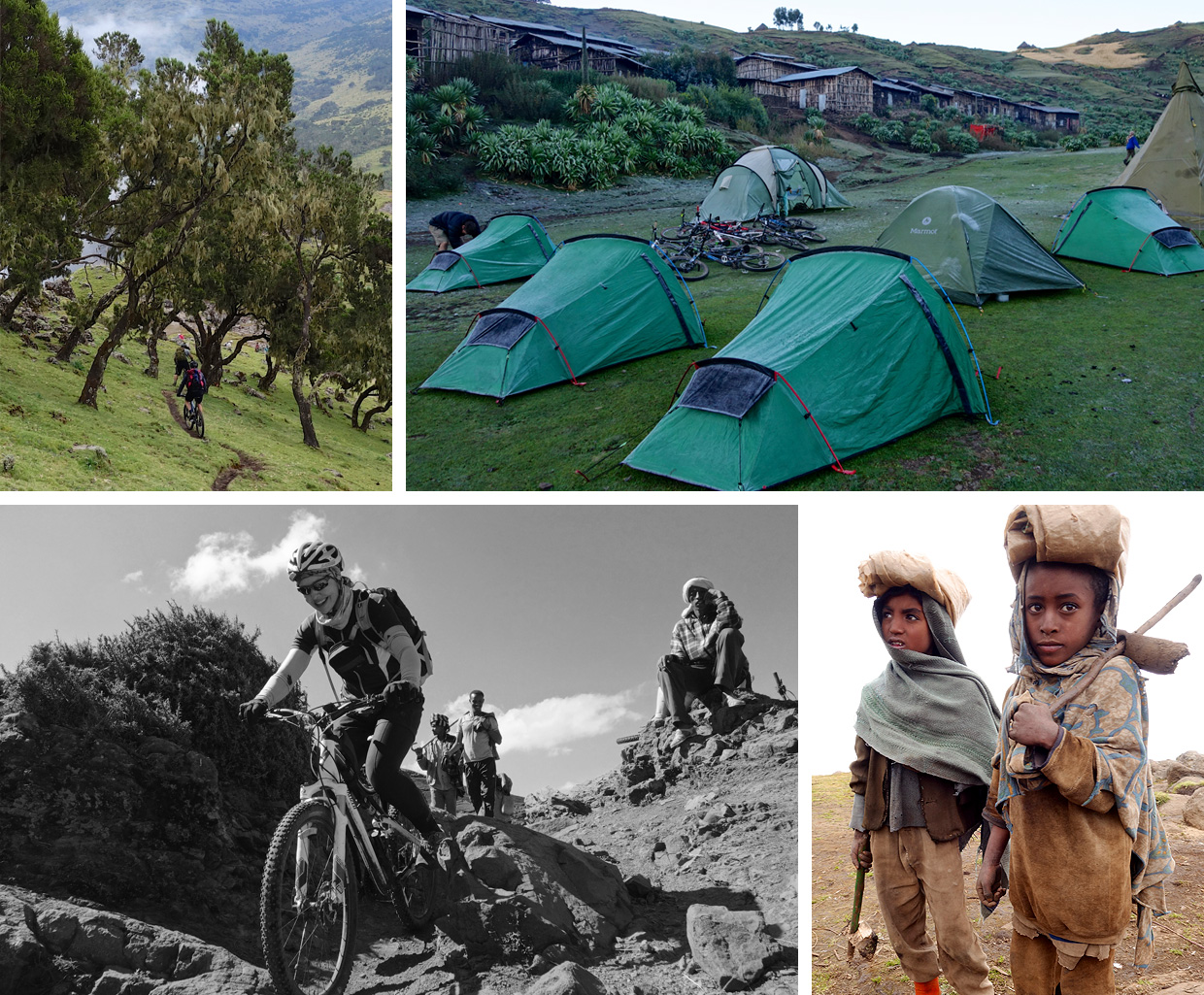 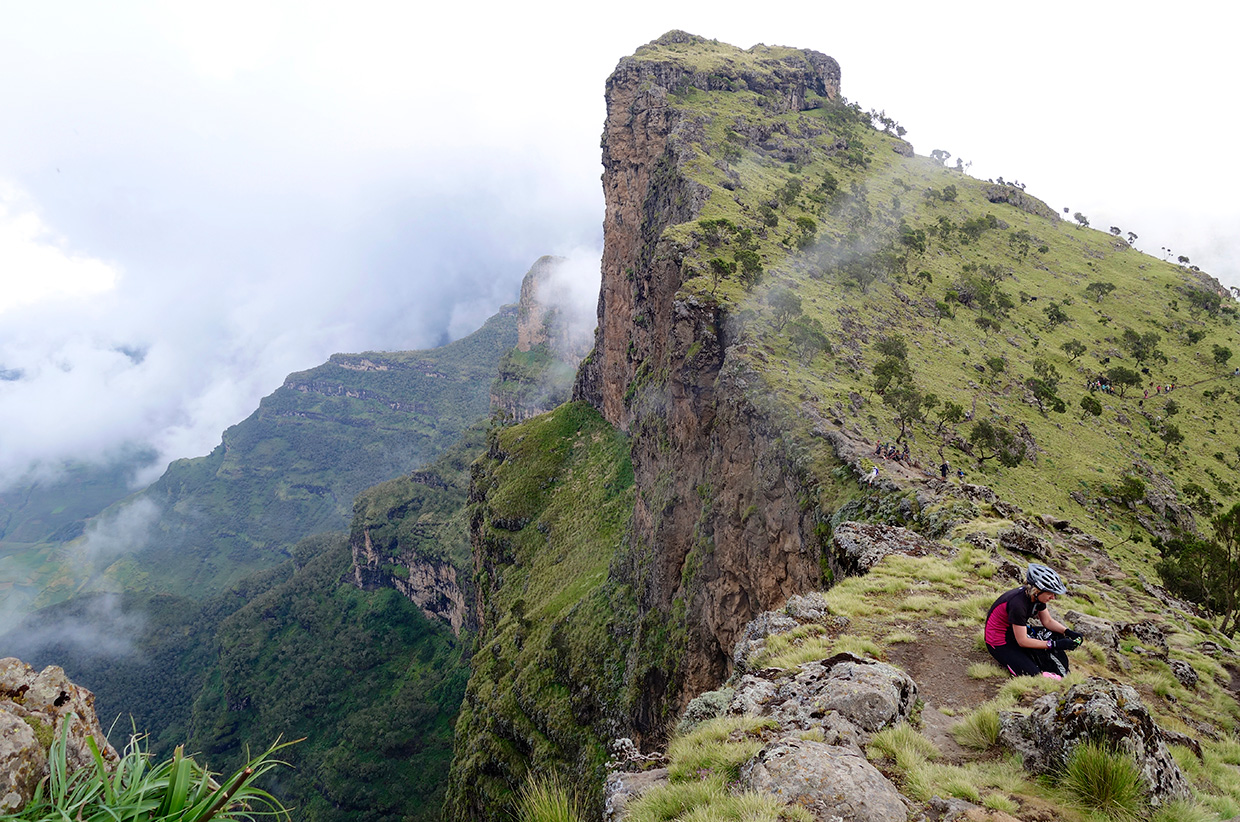 Along with our runner guides, we have a cheery cook who is so serious about his job that he brought a uniform of chef whites with him to add a dollop of glamour to our extremely basic cooking facilities. Even more surprising are the armed men who guard us and our bikes day and night. They are smiley, fatherly gentlemen who were soldiers in the 1974-1991 Ethiopian Civil War. Luckily, on our trip, their duties only involve chucking a few stones at barking, howling, after-dark animal prowlers so that we can get a full night’s sleep. I couldn’t get to the bottom of why their weapons were necessary. My first thought was that we might stumble across a poacher or an over-zealous baboon. But more likely, it was to provide employment for locals, and peace of mind for us.

Whatever the reason, I knew their guns wouldn’t be used to fend off the two rare, protected species that live in this area: the Simien Fox (actually a wolf), or the Walia ibex, a goat with enormous horns, which is only found in these mountains. These species are two of the reasons the Simien Mountains earned a prestigious place on UNESCOs first list of 12 natural World Heritage sites in 1978.

Sightings of the more-common Gelada Baboon are almost guaranteed along this route. A couple of troops of these grass-eating primates ignored me as I rode out of the billowing mist onto their tufted foraging ground. I stopped to watch them meandering between giant lobelia plants that grow up to five metres tall. ‘They’re very sociable,’ Getch explained. I’m not sure what ‘sociable’ meant, or why the Gelada need such enormous sharp teeth for eating grass. I wasn’t keen to be the first to test the bike-baboon relationship so thought it best to push on.

On the rest of the trip, we will swim in rock pools, shower in waterfalls, immerse ourselves in life along the route and sing and dance with villagers. The sun will set, the moon will rise and I’ll sup Saint George’s beer with locals by firelight. I’ll reminisce about the day’s mountain biking with my fellow riders, before planning the next. I’ll say goodnight to the stars, zip up my tent and dream about more tracks. Mother Nature has plenty more magic moments in store.

Tracey Croke is a Sydney-based travel journalist originally from Manchester, UK, who likes roughty-toughty travel, off-track adventure and exploring with her bike. Her quest for a good travel story has involved venturing into post-conflict Afghanistan, sleeping in a swag next to a croc-infested billabong and having her smalls rummaged through with the muzzle of a Kalashnikov.

This expedition was organised by Secret Compass 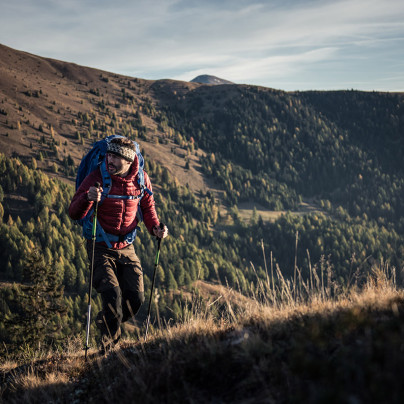 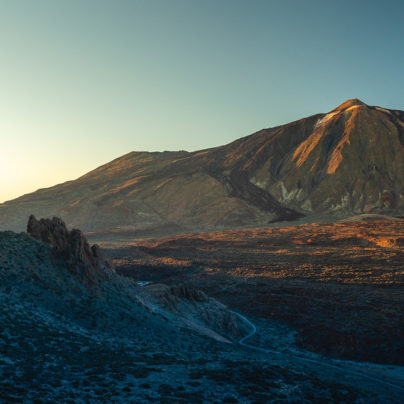