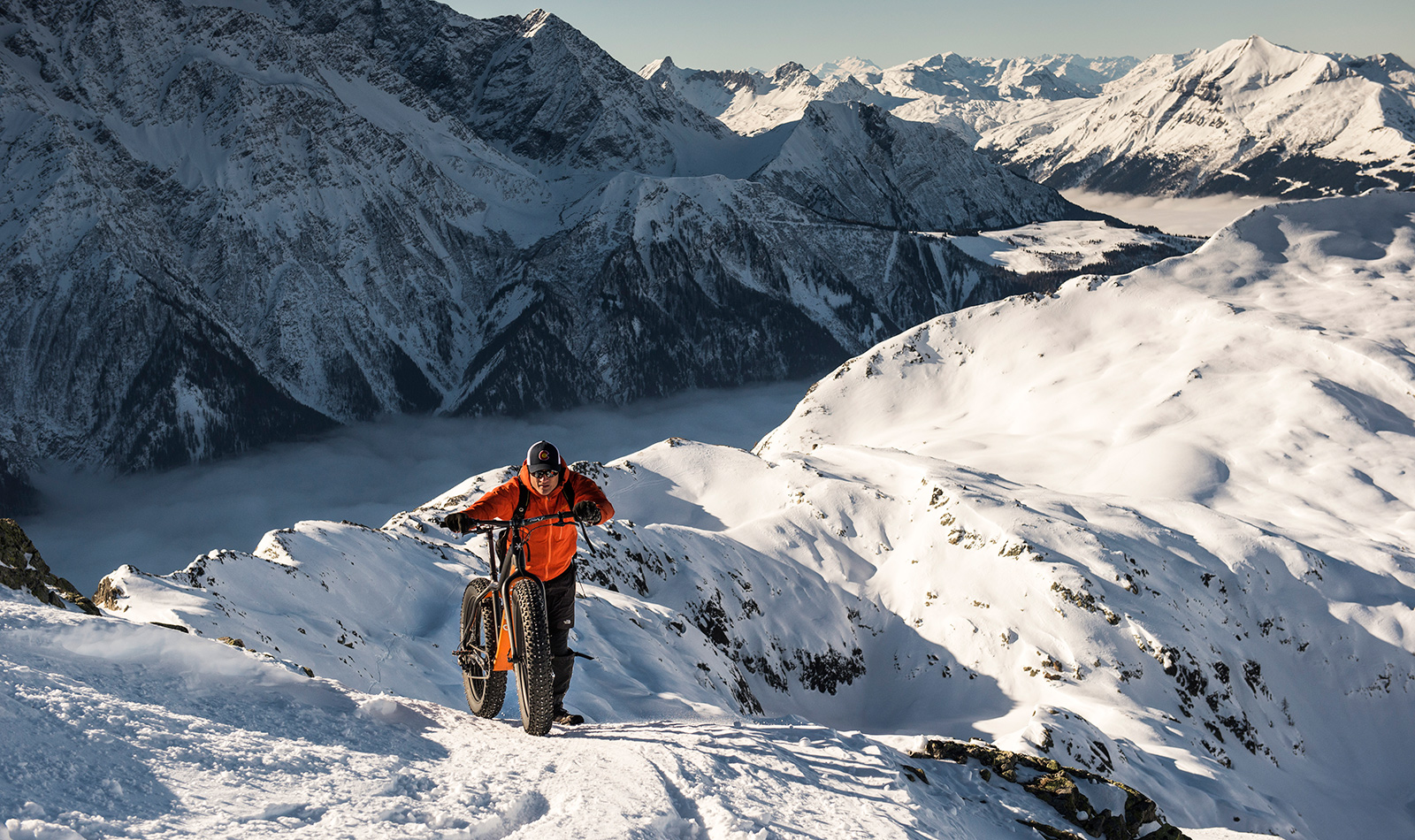 “I woke up in a cold sweat,” recalls Geoff Harper. “I didn’t know if my sleeping bag was too warm, but that’s how I sold it to myself. I’d picked up a slight bug a few days before, but out of frustration I’d ignored that basic human message that I shouldn’t be doing anything strenuous.” Shrugging off a sniffle in the extreme places of the world is something that nature will seize upon, magnify and blow out of all proportion.

It was exciting to be part of a world first. Even vicariously. Sipping cappuccino at the bottom of a sunny and deserted piste in the Val Veny, I was guilty of conflating adventure with superlatives; fastest, highest, first… I guess that’s what happens when you see human endeavours as a headline, a Facebook post, or a sensationalist snippet. I had no idea what visceral experience was being lived and felt under a storm cloud over the Col de la Seigne. I had only hopes of success and fears of the opposite – the f-word – which I’ve come to realise has no place in this story.

I was waiting for my friend Geoff Harper to come rolling down towards Courmayeur on the oversized tyres of his carbon fatbike, to join him for the third day of his attempt to complete the first winter Tour du Mont Blanc on wheels. The route – 180km through France, Italy and Switzerland, with 10,000 metres of ascent and descent – would be thronged with hikers and bikers in summer. But on a March morning, as through the whole of winter, a thick coating of snow silenced the hills and barred the trails to those on anything less than tractor tyres.

Courmayeur, in Italy’s Aosta Valley, would mark the halfway point of Geoff’s 5-day goal, and I was planning to journey with him on touring skis, as far as that evening’s camp on the Swiss border.

I’d driven through the tunnel from Chamonix at dawn, taken the first cable car and skied as deep into Val Veny as the pistes would take me. Conditions looked perfect for our climb up to the Col Ferret in the north east.
My phone buzzed my pocket just as I began skinning towards where Geoff should be. Conditions over the pass, I learned, had been very different.

The route – 180km through France, Italy and Switzerland, with 10,000 metres of ascent and descent – would be thronged with hikers and bikers in summer. But on a March morning, as through the whole of winter, a thick coating of snow silenced the hills and barred the trails to those on anything less than tractor tyres. 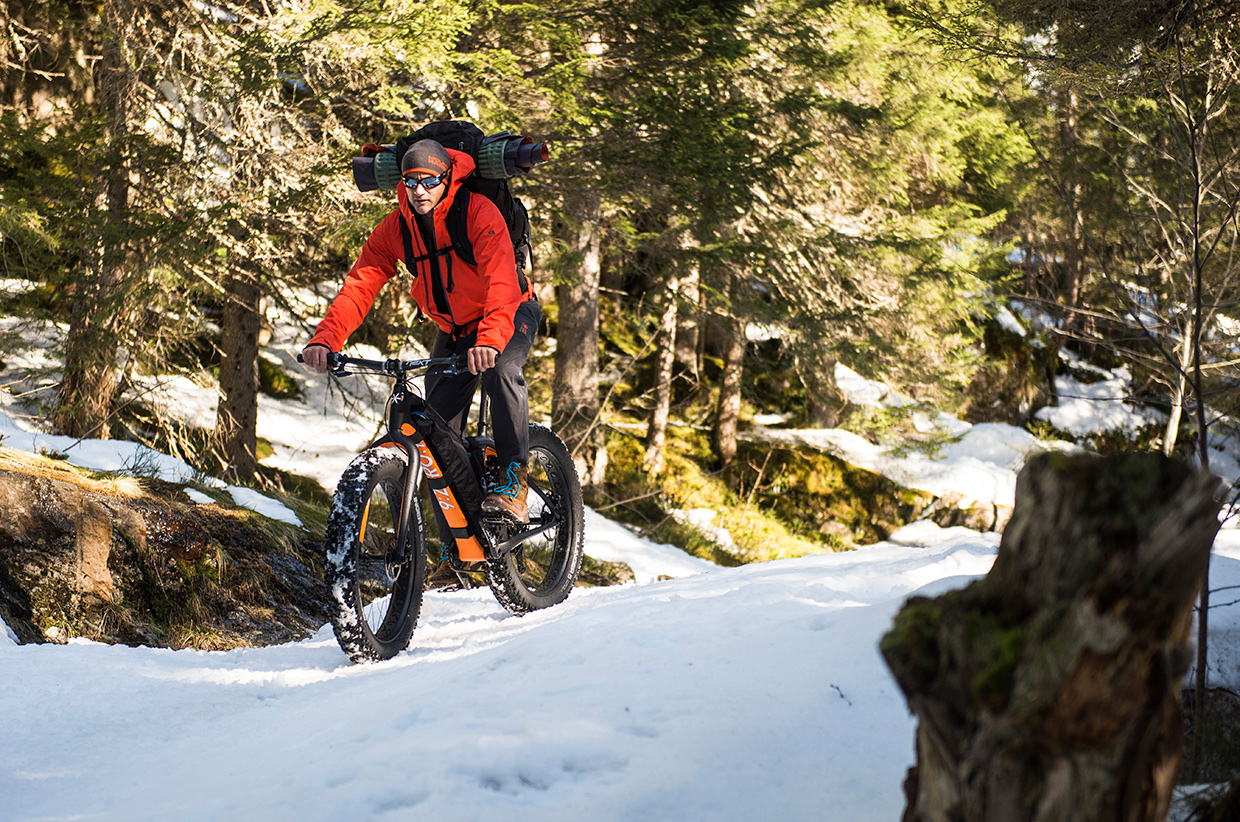 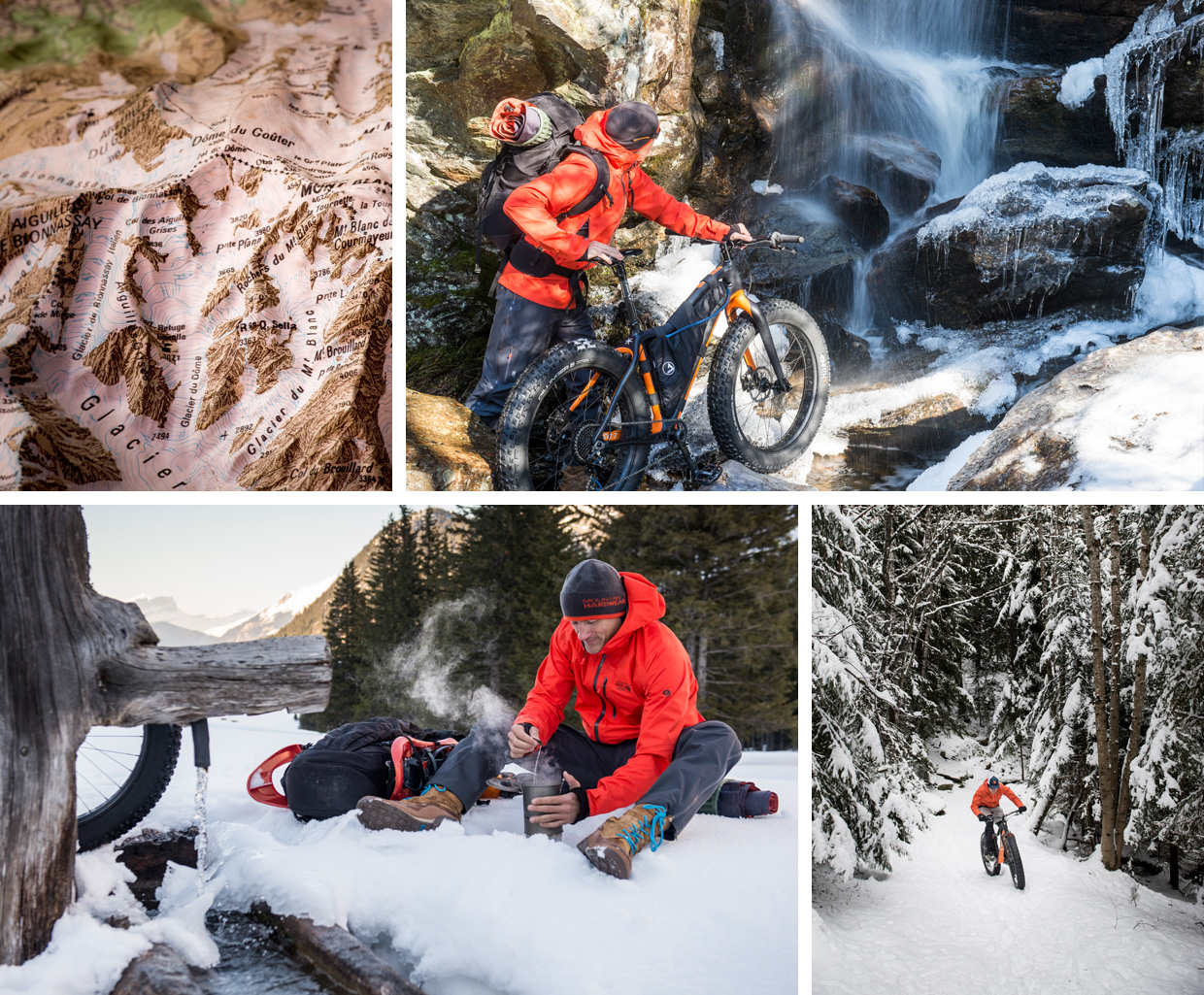 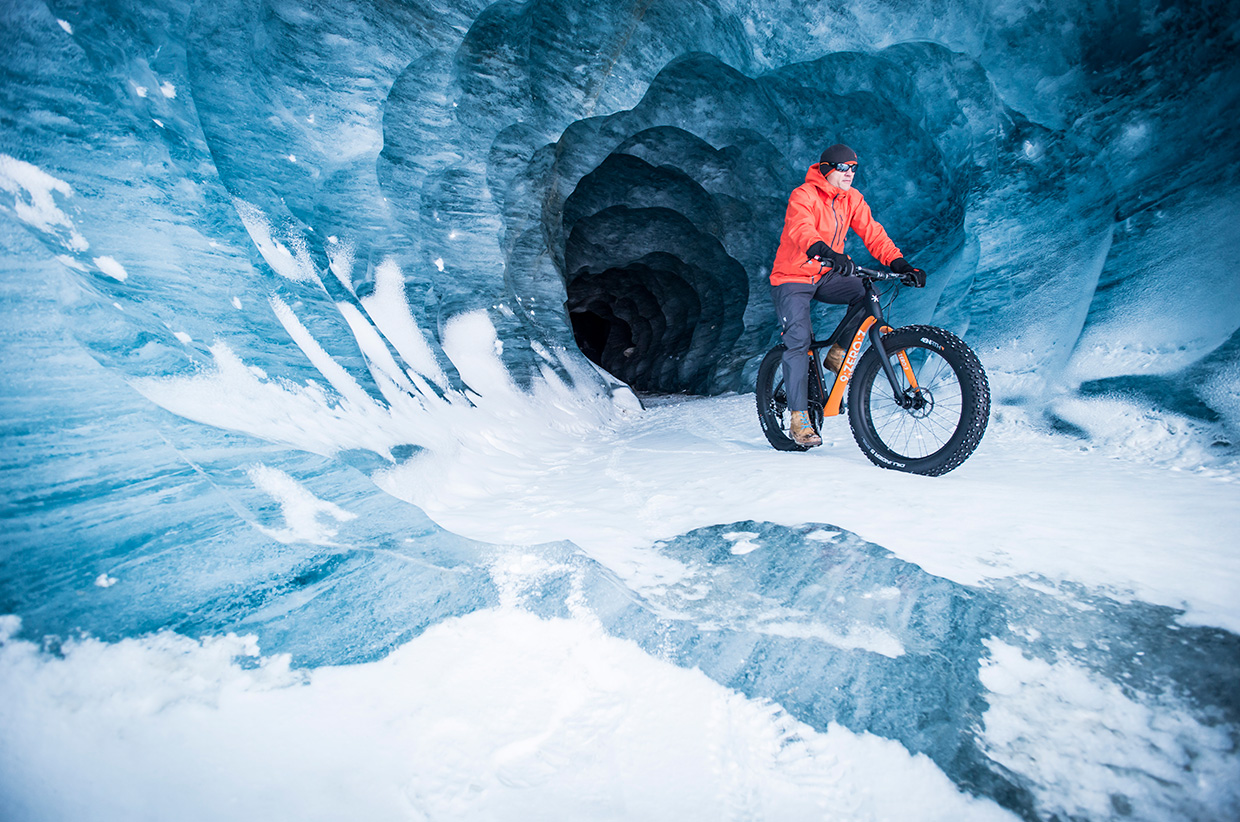 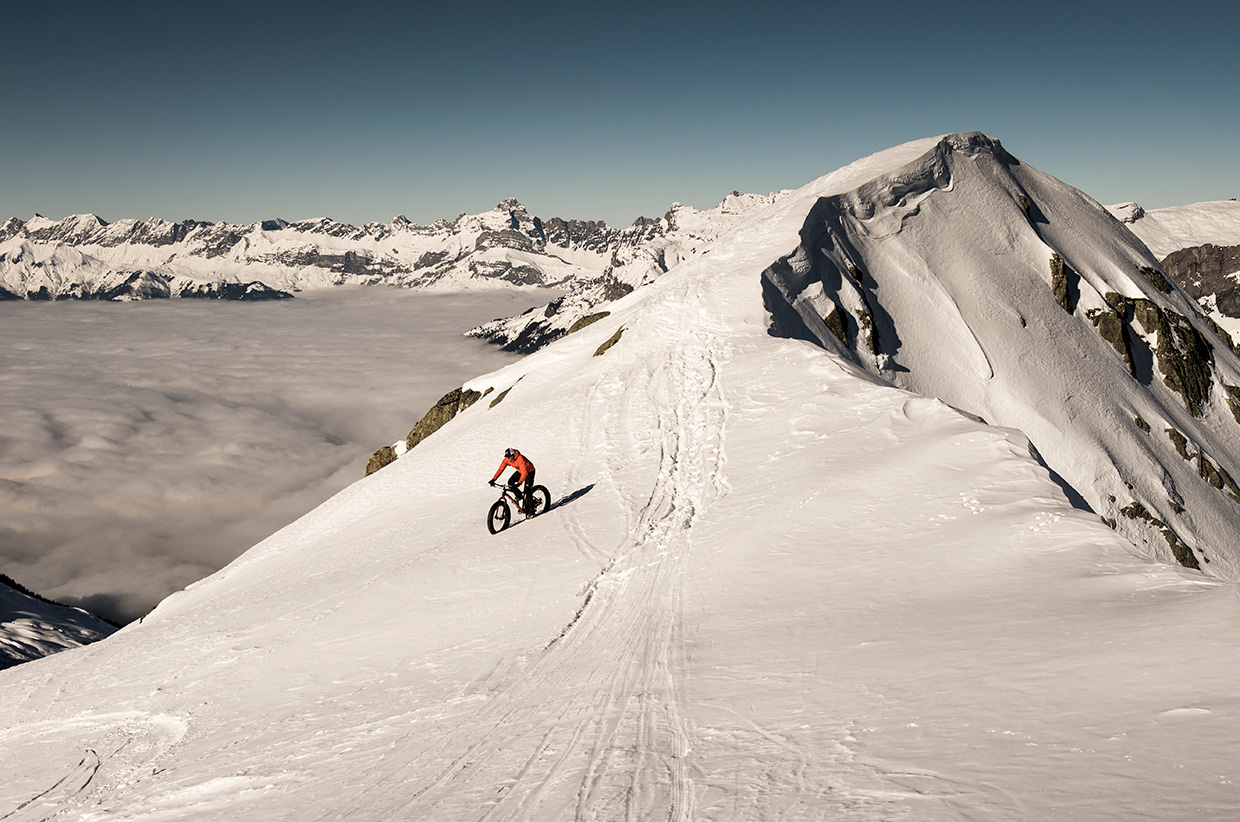 Was I going to bail out empty handed or push through? I pushed into a 10-hour day over to the Refuge du Bonhomme and arrived exhausted, feverish and running out of fuel.

When I first met Geoff in December 2014 he’d spent a year in Colorado poring over contour lines and planning his TdMB route, but had only recently clapped eyes on the monstrous Mont Blanc Massif. Originally from Surrey, Geoff had lived in the US for 16 years, where fatbiking is huge. Why come back to Europe?

He told me, “A couple of years ago I fatbiked across the southern coast of Iceland, sticking to the beaches. Having done a big sand trip, I wanted to do a big snow trip and I wanted to go somewhere iconic for snowsports. I wanted to get the bike in amongst the hardcore of Chamonix, and showcase the sport.”

Although fatbikes originated in the flat, expansive Iditarod-type terrain of Alaska, they are essentially mountain bikes. Or in Geoff’s hands, perhaps mountaineering bikes.

“I have some background in alpine climbing, and I’ve always had bikes so this project is a combination of mountaineering and biking.” says Geoff. “It’s not a pure biking trip, because let’s be honest, on those big passes I’m off the bike. It’s no different than ski mountaineering in that respect; pushing up and riding down.”

And the route is no different than any skiing or mountaineering expedition, testing strength, stamina, skills, and perhaps most significantly, the capacity for decision making. The mountain does not respect your planning, your experience, or your dreams.

“It was heading towards the last week of ‘winter'” Geoff explains, “and I started to feel the pressure, because I’d touted this as a winter trip. I wanted, at least, to set off before spring. I couldn’t find a 5-day weather window, which I now realise was a silly thing to look for. It started to suck the energy out of me, because every day was a day I wasn’t doing it. So I found a window of 3 good days and decided to set off.

“From Chamonix I headed to Les Houches and over Col de Voza, about a 600 metre climb, down through Bionnassay and Les Contamines and towards the Col du Bonhomme. I’d set myself a bivvy spot about halfway up to the Col, and settled in for the night.”

During his training – and Geoff is a certified strength and conditioning coach by trade – he had regularly endured strenuous 7 hour days on an empty stomach. “For endurance sports it trains your body to run on the fat you carry, rather than ingested dietary fat, carbohydrate, and protein.” On day two that conditioning was put to the test.

“That morning, after blaming the sleeping bag for my cold sweat, I found I couldn’t eat, so I knew it wasn’t going to be the best day. This was the first big hurdle of the trip. Was I going to bail out empty handed or push through? I pushed into a 10-hour day over to the Refuge du Bonhomme and arrived exhausted, feverish and running out of fuel. I still hadn’t eaten.

“And then a storm came in.” 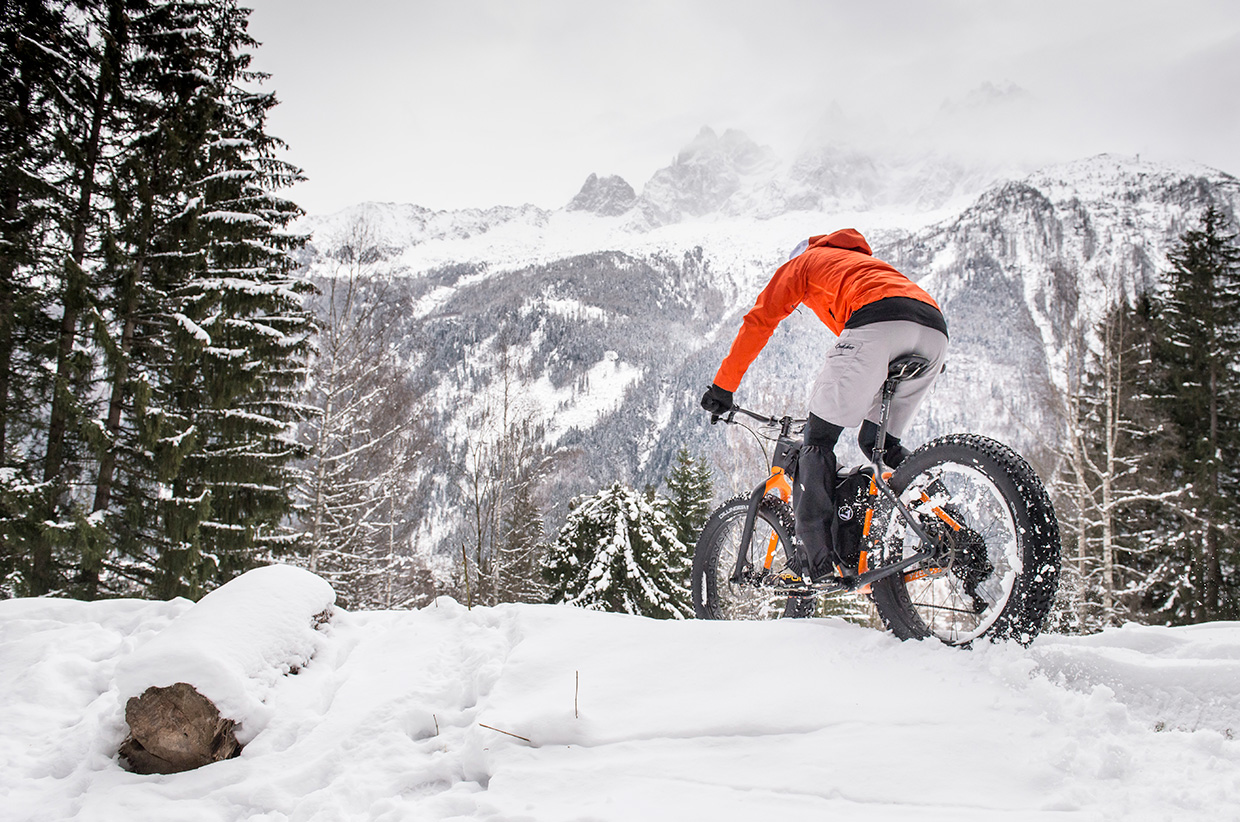 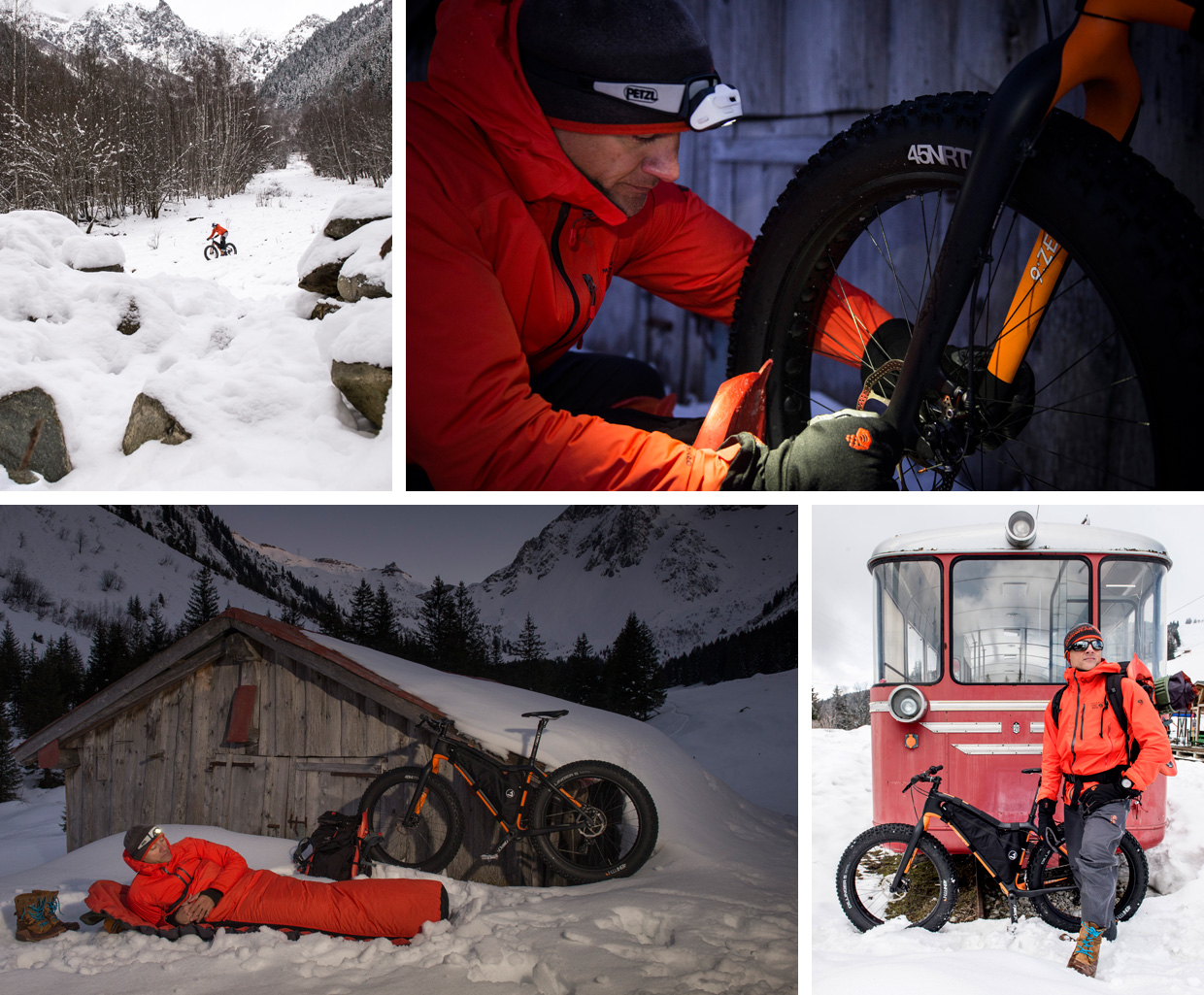 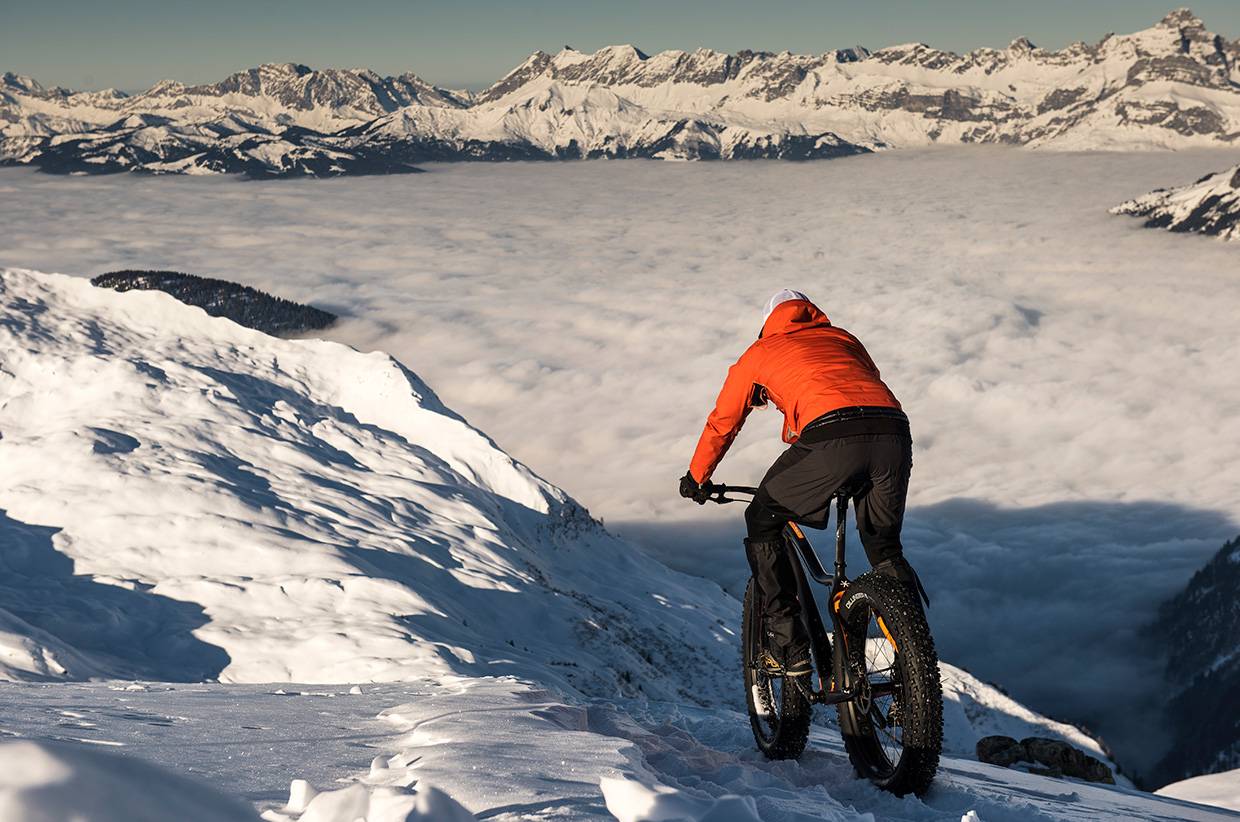 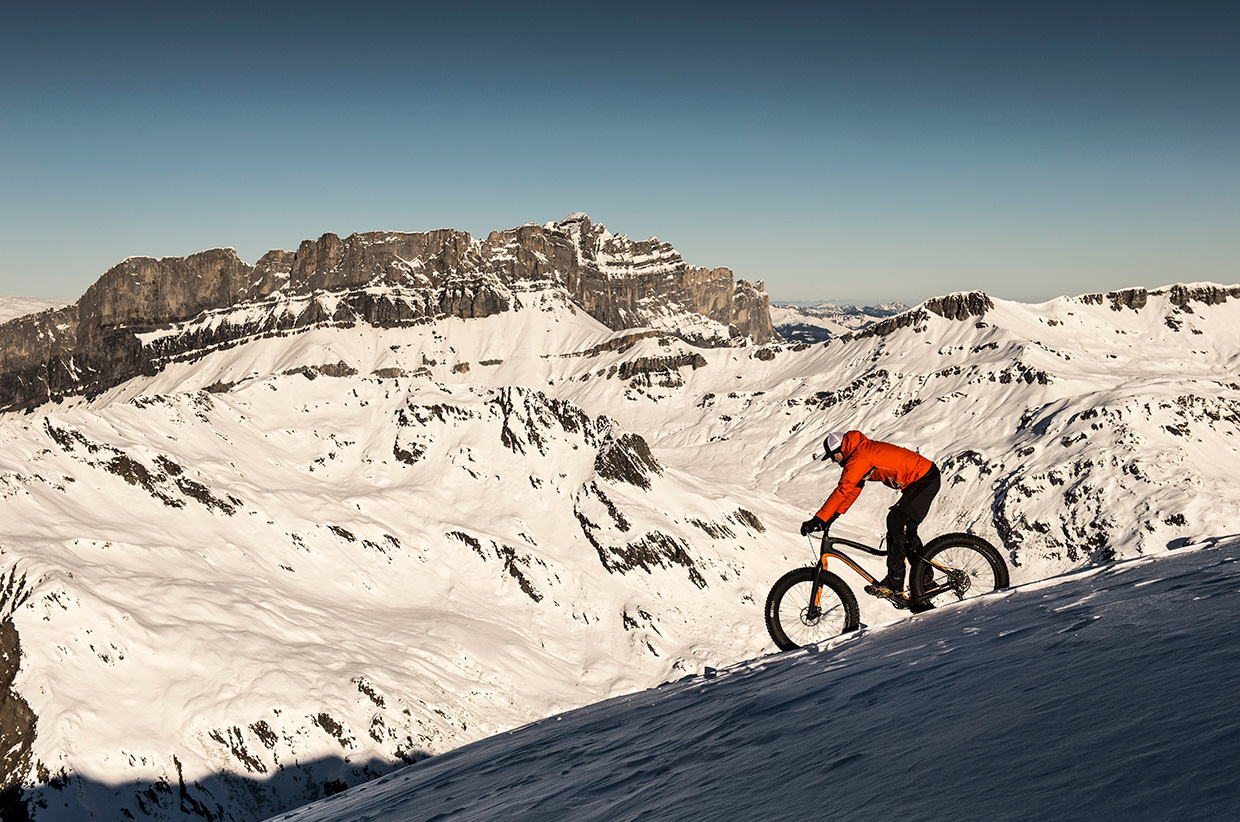 How quickly the mountain compounds every problem. Geoff was now at the single most inaccessible – and inescapable – point of the Tour. The best laid schemes of mice and men are as nothing to a brain addled by altitude, hunger and fever. Despite a year evolving a trace route to follow via his Suunto watch, and time spent with Portland mountain rescue (where 85% of call outs are from hikers that follow the treacherous fall line from Mount Hood) Geoff’s primal instincts bested his logical thinking.

“I could see the valley below. I could see a direct line of sight between me and safety. I overruled my trace and took the fall line into a really steep valley that I couldn’t see the end of. It goes against everything I’ve ever learned.

“I got to a point, above a cliff band, where I realised there was no way out. I was on the side of that mountain, in a gully, completely on my own with a bike and a heavy pack. I was scared out of my mind. I thought about my family.

“When I looked at my phone and there was no service it sent a jolt through me that superseded everything. I wasn’t sick anymore, I wasn’t hungry anymore.

“I hadn’t tried to climb back out as I thought it would be impossible; the gully was soft powder snow with a crust of shiny ice. I looked around and thought ‘Fuck, no. It’s not the end here.’ I got kind of angry about it. I couldn’t go along with the situation.”

Poker players will tell you ‘Don’t throw good chips after bad.’ Geoff thought he could get down that cliff band, but he couldn’t see what was next. It takes a will of iron to fold with so few chips in your pile.

“I used the bike. I was on my knees with my snowshoes pointed into the snow, moving the bike a foot at a time and shuffling up towards it. I was moving diagonally because it was too steep to go straight up, and I was slamming the handle bar through the ice, the other features of the bike would imprint into the ice and bite enough for me to pull up on the frame. I guess it took me at least an hour to climb out, but I wasn’t thinking about anything. I almost don’t remember it.
I headed down the valley to the town of Les Chapieux, hoping to see people after that very lonely moment. Unfortunately the place was deserted, but I found a winter room with a closing door. It would be lucky if it made half a star as a hotel, but it got me out of the storm, I made some tea, and thanked my lucky stars.”

I got to a point, above a cliff band, where I realised there was no way out. I was on the side of that mountain, in a gully, completely on my own with a bike and a heavy pack. I was scared out of my mind. I thought about my family.

As a result, Geoff didn’t make our meeting that morning, and I was left in Val Veny with no world-first to point my camera at. That was my selfish second thought; my first was relief that my friend was alive.

My third thought was the one I lingered on. A world-first is a headline, an event, a trophy, but what happened to Geoff was an adventure. Some would use the f-word, or if the worst had happened, ‘misadventure.’ What’s the difference? That the word misadventure exists shows a misunderstanding of what adventure means.

If Geoff had completed the Tour perhaps I’d have written a sensational piece about the ‘daredevil’ who ‘conquered’ the TdMB. We’d learn nothing meaningful about Geoff, and neither would he. “It’s nice to know you have the fight in you” he told me. Success in adventure is living, learning and wanting more. Ultimately the mountain tells us whether we are allowed to pass; Geoff decided to listen.

Postscript: Geoff is currently planning for a second attempt in the winter of 2015-2016 and working on supressing his subconscious.

Geoff Harper is the editor of fatbiking.eu and can be found on Twitter @GeoffSHarper 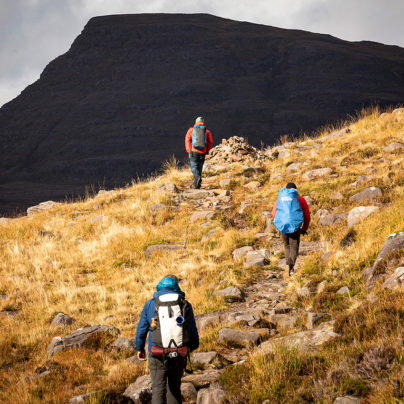