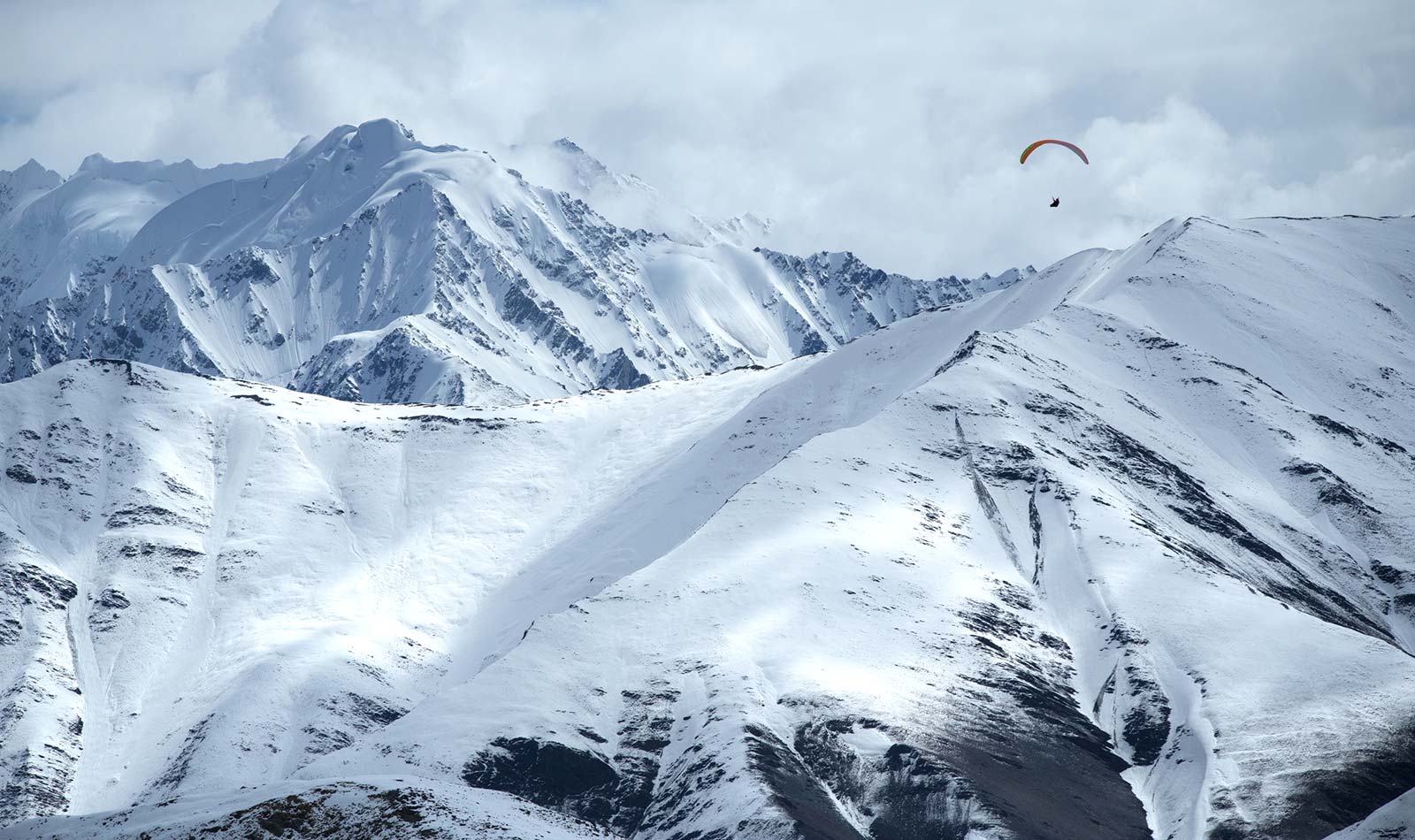 As the familiar pips at the start of my Skype call fade, they are replaced by the cheery, gravelled voice of Gavin McClurg, energetic to the point of booming. The American is on good form, despite recovering from a dislocated shoulder. We dwell on the obvious irony that after surviving his most epic adventure yet – the one we are due to talk about – he injured himself in a relatively innocuous mountain-bike accident.

Gavin seems to have a different mindset to most of the population. He gets things done – whether it be kitesurfing miles off the coast of the Hebrides, downhill ski racing, or sailing around the globe. To achieve this, and maybe as the mountain-biking incident goes to prove, he seems to have a unique perception of risk. At a number of points during the interview, he is at pains to point out that he isn’t crazy. I fully believe him, but some may question the sanity of a man who willingly undertook something that no-one else thought possible, enduring near-starvation, bear encounters, extreme weather and total solitude in one of the remotest places on Earth…

Sidetracked: Hey Gavin, so the Alaskan Traverse by paraglider… can you tell us a little more about what that entailed and how the first seed of an idea to attempt it was planted?

Gavin McClurg: The Alaska Range of mountains cuts a striking elliptical sweep west-east across the state, taking in Denali National Park. It’s 480 miles as the crow flies (and the route was 497 in total) and is almost entirely wilderness. There are only two roads and a couple of villages. It is huge, immense, massive.

This thing has been a six-year obsession for me. I found myself up there with my ex-partner and her brother, Kenny. He’s a bad-ass pilot and took us out in a Supercub bush plane. Two things struck me; the beauty of this place – ah man, just wild! – and the turbulence. We were really getting knocked around. As a paraglider, as soon as I experience turbulence, I think thermals. Paragliding is all about thermals. Without them, you don’t fly. 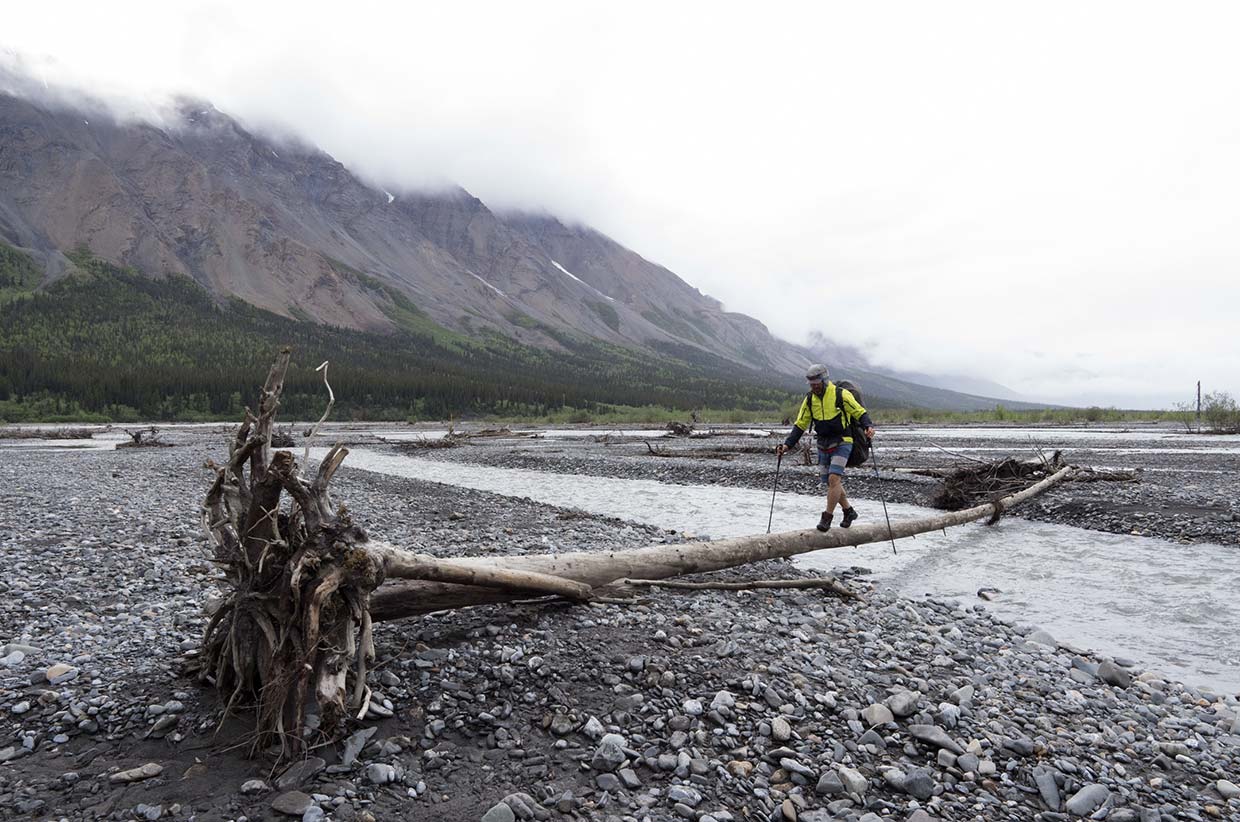 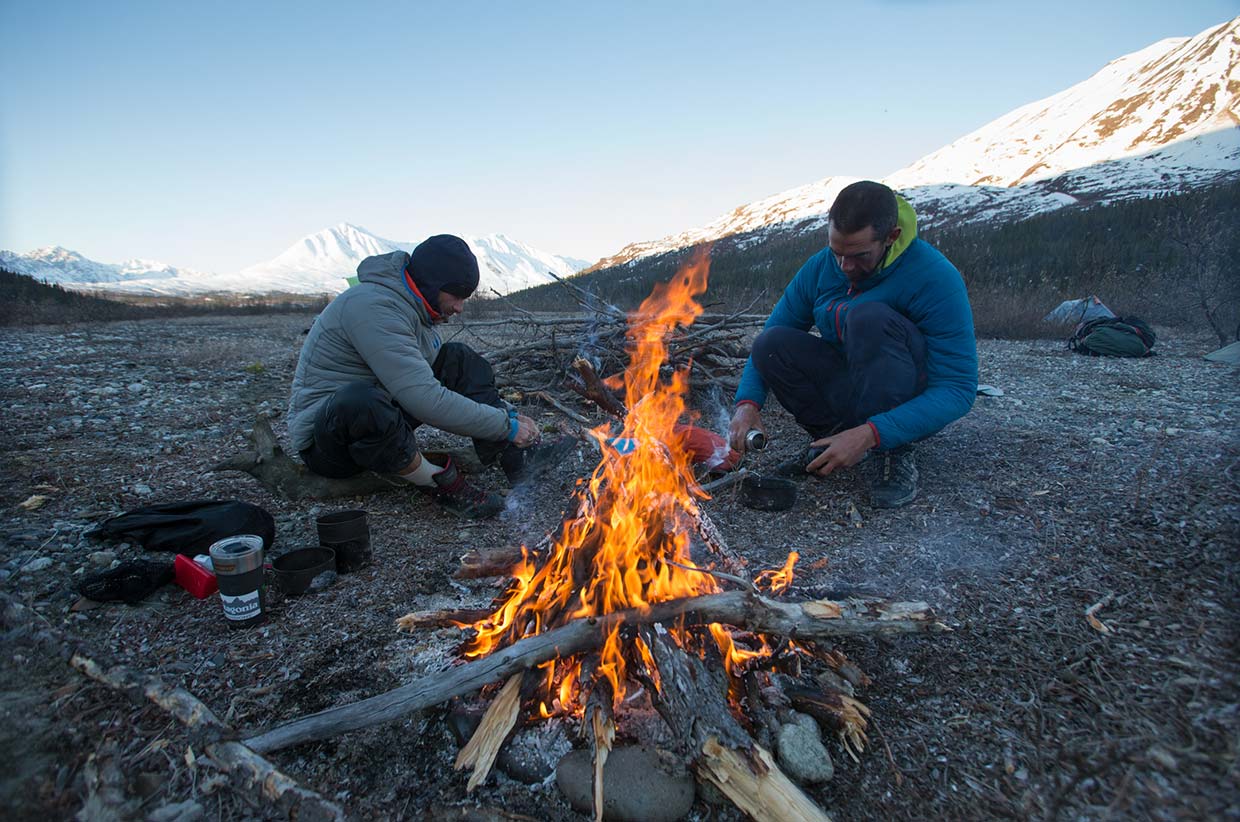 So, you knew there was a possibility of flying that area. There must still have been a huge leap between that plane flight and the idea of a traverse by paraglider.

Yeah, I guess, but I knew instantly that I wanted to do the traverse. Right there and then, in the plane. Everyone said it was too remote, too wild, not enough infrastructure, too much snow. Even I doubted whether it was possible, but that just made it the perfect challenge. The biggest sticking point was food. There was no way I’d be able to carry it all – I needed to cache supplies on route, and to do that I’d need a helicopter. At the time, I just couldn’t afford that, so any immediate plans were shelved.

Years later, I got a call from Kenny. He’d found a helicopter at a great price, and man we had to buy it! He didn’t even know how to fly the thing, but learned to, and the last barrier felt surmountable. There were still so many unknowns, and I had such a small window to be able to complete this thing. Only the months of May and June were suitable. I found a partner – Dave Turner, a real ox of a guy. Red Bull committed to film our attempt. This thing was happening.

So, we prepared, researched, and made five food drops. Enough for two to three weeks of flying. With hindsight – excuse my language – that’s where I really fucked up.

Let’s move on to that. In my naivety I assumed that you flew the whole distance, or would fly, land, hike up to a high point, then fly again. It didn’t play out like that, did it?

No! With good weather conditions, we would have flown a lot more, but in retrospect we went too early. If we’d have waited a few weeks, it would have been a different experience. But we had a film crew with limited time – we had to go.

There were many days when we couldn’t fly at all. We debated whether to wait it out in our tents or make progress on foot. There was never really a right answer, but we wanted to keep moving. The terrain was so brutal. We were postholing through rotten snow, bashing through horrendous alder forests. Despite packing as light as possible, our packs weighed 60lbs without water. We were hiking no more than two miles a day while burning 6-10,000kcals. I’d planned for 1,500kcal of sustenance a day. It was too early in the season for there to be any fish, and while there were bears, we weren’t prepared to hunt them, and had no sensible means to deal with that amount of meat. We had planned to suffer, but we were starving.

The implications of each decision weighed heavily on us. Hunger made things so hard. But we lucked out, twice. First, when we were 50 miles from our second food cache and out of food, we stumbled upon a cabin used in the Iditarod race. It was stocked with supplies: peanut butter, chocolate, coffee. A stove. We were saved. We stayed there for two days and stuffed ourselves.

Then, later on with better weather, we’d been having a huge four-flight day. We’d hiked 12,000ft on a single pack of instant oatmeal – 120kcal. We flew over a small, rough airstrip, with a little camp next to it, and made an instant decision to drop down. The hunters looked after us, fed us.

Were there any other real crux points of the trip? When you genuinely weren’t sure whether you’d make it?

I’m a pathological optimist, but there were plenty of times when things just felt unreachable. After 27 days, we’d reached the edge of Denali National Park. Not even halfway. The weather shut us down for eight days. Legally, you aren’t allowed to take off in the NP, so we wanted to cross it in one go. If we failed we’d need to hike out. We needed good conditions. Things got tense. Every now and then, the weather would break for a while and we got these incredible views, but there was no way we could take off. Dave had to leave shortly, adding more pressure. He was going to have to call the trip short, but wanted to fly out to the other side of the national park at least. It was a frustrating time, but also simple. There were no emails or bills. I read, and we were able to fish a little, enjoy being in an incredible landscape.

On the eighth day, the weather was marginally better. Dave called it. By the time we took flight, the weather was already closing in. Cruising past the highest mountain in North America was an incredible, otherworldly experience, but I climbed into cloud – bad news for a paraglider. I was shaking with cold, covered in rime ice, eyeballs icing up. I lost sense of what was up or down. I made it through, but became separated from Dave. We both ended up landing short of the park boundary and hiking out, alone for a couple of days until we could rendezvous.

I climbed into cloud – bad news for a paraglider. I was shaking with cold, covered in rime ice, eyeballs icing up. 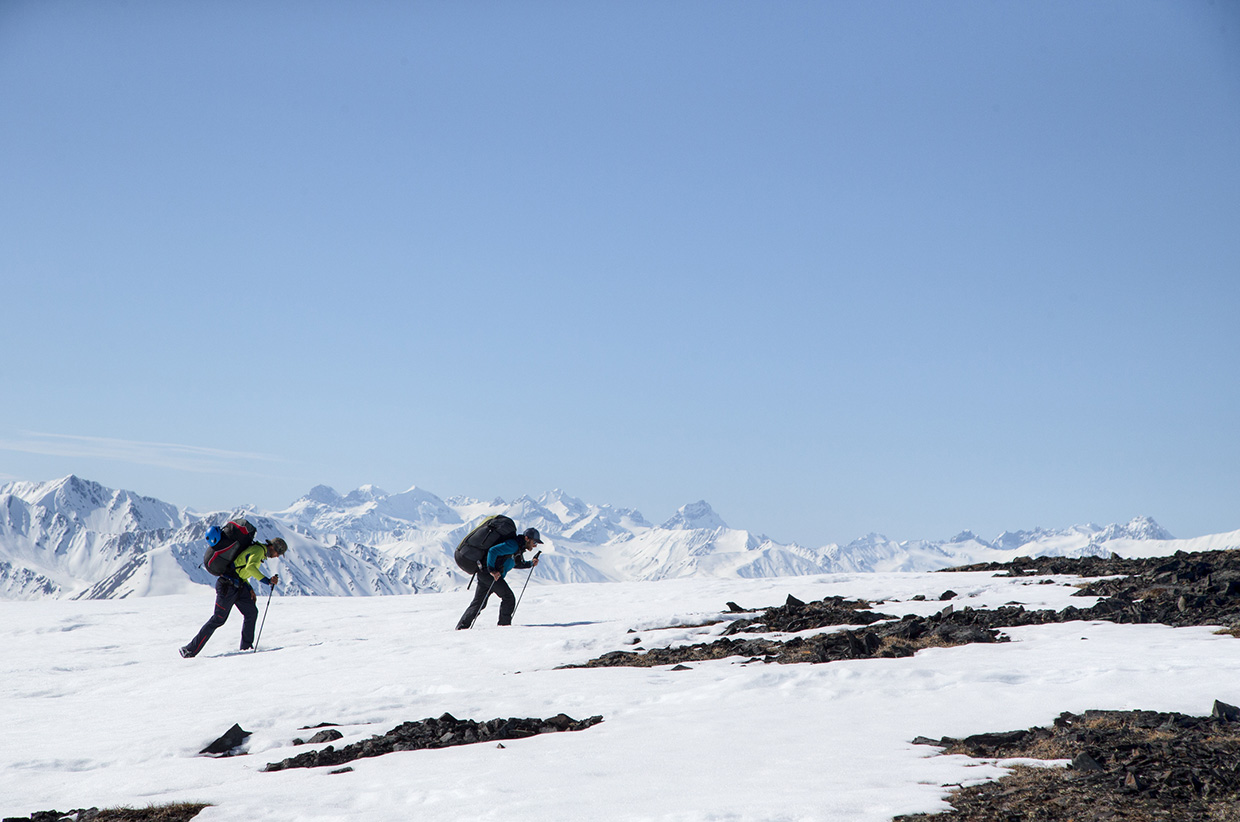 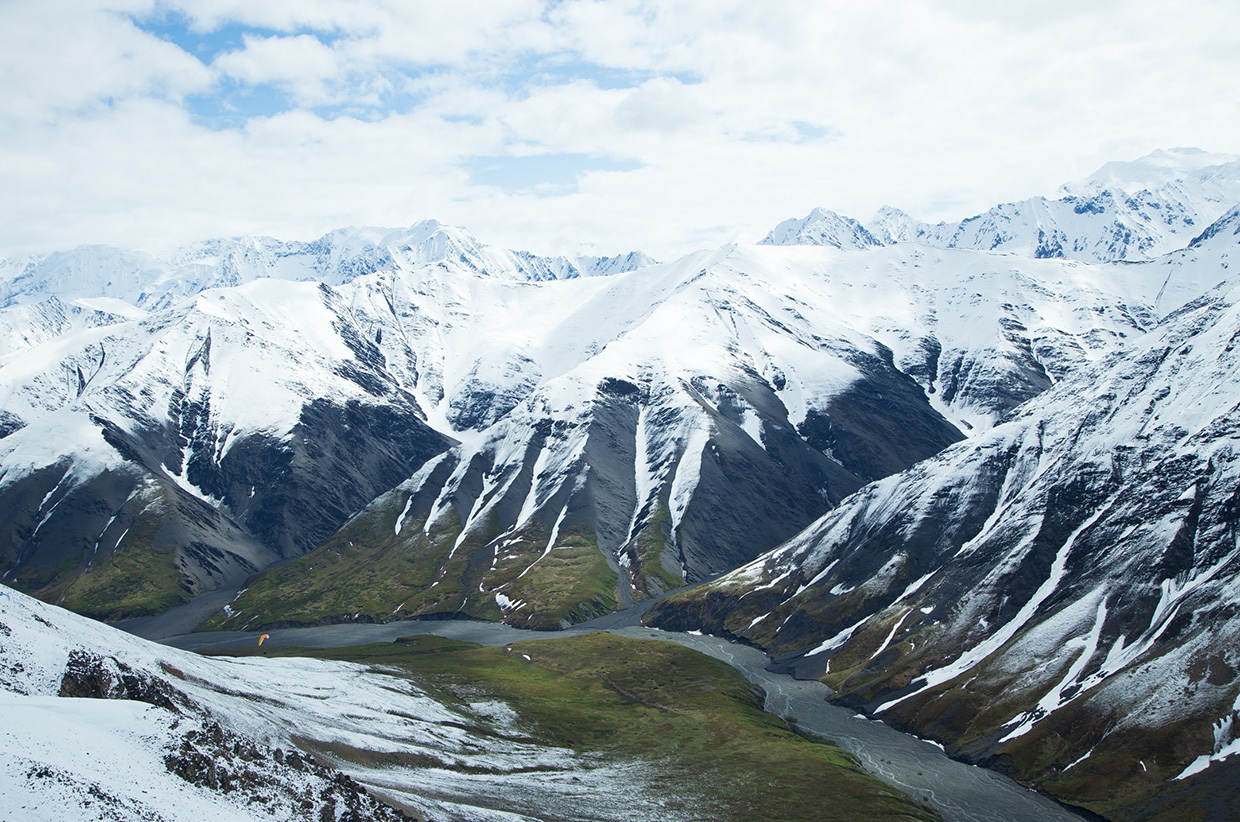 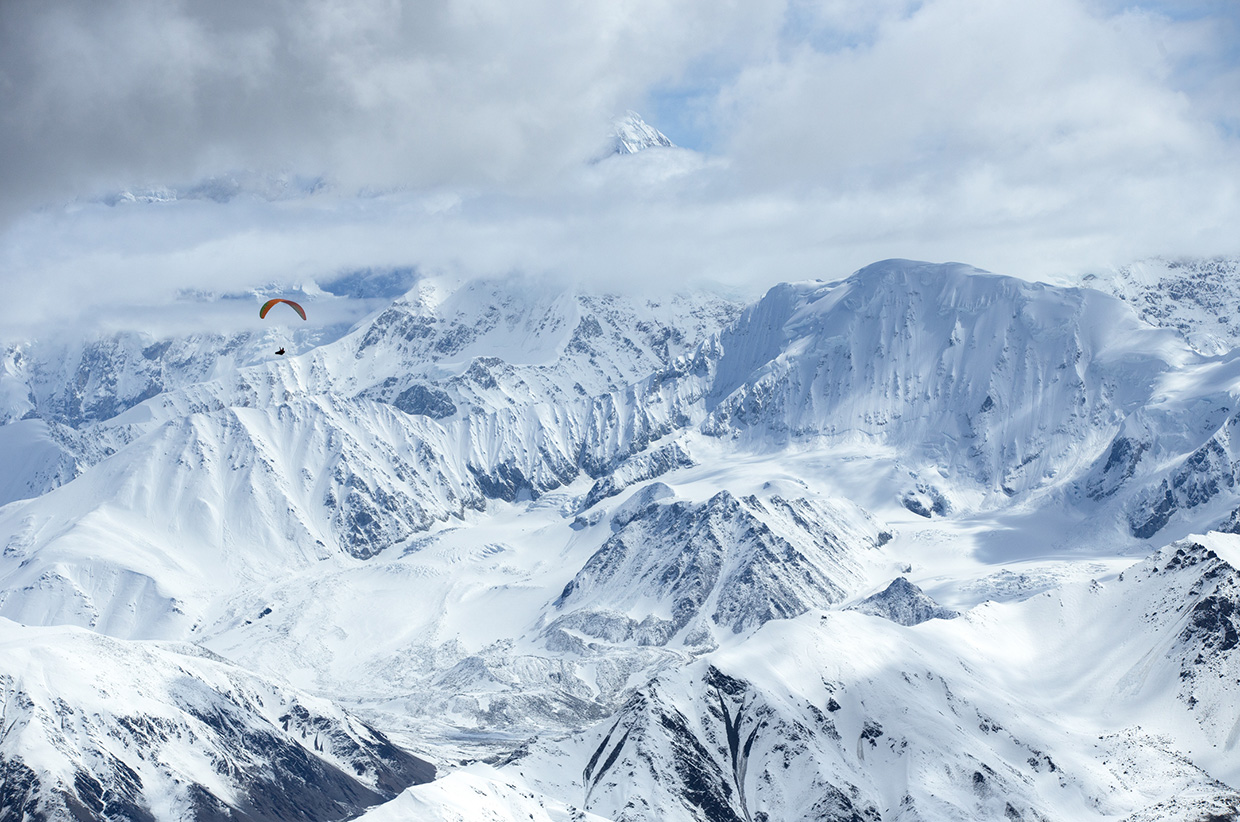 And after that, you completed the rest of the traverse alone?

Yeah, Dave and the film crew ran out of time. The weather had finally broken with nearly half of the traverse still to go. It was still incredibly tough, but I was able to fly much more. I had ten days out there by myself. It was obviously a totally different dynamic. I carried the weight of every decision alone. Should I launch? What’s on the other side of that col? Is the weather changing? Should I push on? How the hell do I get across that river? Is that bear going to approach? In some ways, it made things easier. I didn’t need to worry about Dave any more, or feel the pressure of a bad decision, but at the same time there was less of a safety net. I missed his friendship and sense of humour, but I gained solitude.

And you eventually completed the traverse in 37 days. To many people, the risk that you exposed yourself to, the hardship that you endured, would be unjustifiable. You clearly took steps to manage the risk, but it appears that it is part of what drives you.

You could say that. I feel that in today’s world, it is easy to be anxious, you know? With all of the pressures of everyday life, it is hard to feel present and in the now. I think I found it easier when I was younger, when all I worried about was ski racing. Things aren’t as simple any more, except when I’m flying, except when I’m in deep. Then, your job is to wake up, eat, stay alive, make progress, don’t die. That’s when the world starts to become clear. I felt a real sense of place in Alaska. There were times when I knew for a fact that no person had ever set foot where I was. I had a real feeling of discovery – not like Christopher Columbus, just an incredible sense of being able to appreciate true wilderness.

Maybe that’s where Gavin has got things right, while we take the safe option, and opt for comfort. We avoid the obvious scary risks, while invisible ones like day-to-day stress threaten to take over. Maybe the greatest risk is that we are so afraid to step out of the comfort zone that we miss the opportunity to truly live life. While few will be rushing to repeat the Alaska Range traverse, it’s impossible not to be inspired by it.

Gavin McClurg is the adventurer’s adventurer. He spent over a decade sailing around the world – and may be the only person ever to learn to paraglide while living on a boat. He’s a boat captain, expedition leader, climber, former ski-racer but it’s his skill under a wing that’s his true strength.
Website: cloudbasemayhem.com
Instagram: @gavinmcclurg
Twitter: @cloudbasemayhem
Facebook: /gavinnmcclurg