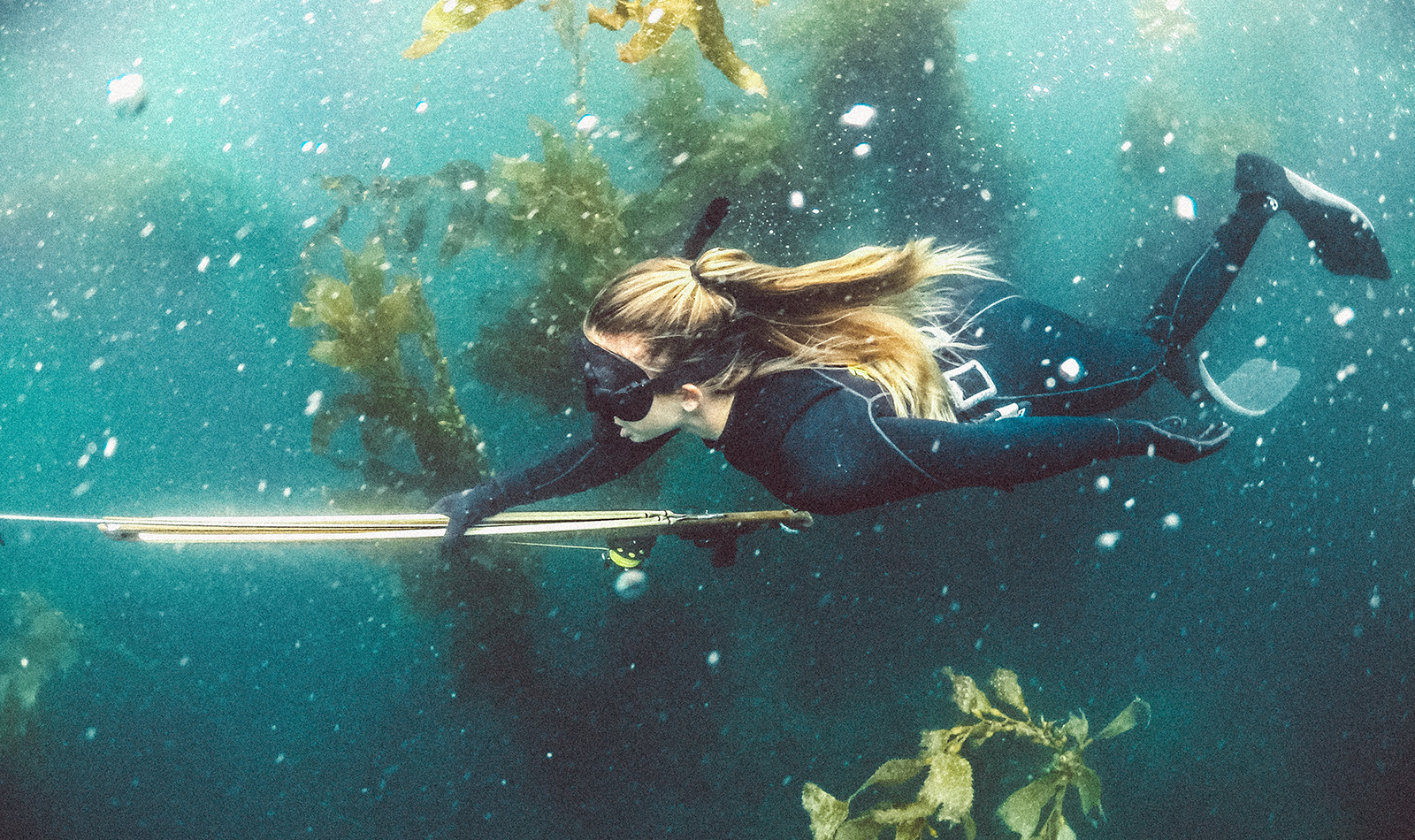 Surfing, Freediving and Fishing in California's Channel Islands
Story and Photography by Jay Kolsch // with Hank Gaskell and Malia Lauer // written by Daniel Neilson
Produced in partnership with Visit California

First came the dull crack of the speargun fired through the clear Pacific water, its target hidden by thick kelp forest.

First came the dull crack of the speargun fired through the clear Pacific water, its target hidden by thick kelp forest. Barely a moment later, as Hank and I watched, Malia turned and swam the 6m to the surface to begin pulling in the line. We hoped there’d be something big on the end of it. We were hungry.

At Ventura Harbour, 45 miles north of Malibu, California, we loaded our equipment onto the ferry bound for the Channel Islands. There were kayaks and surfboards, spearguns and cameras, three-gallon water jugs and dive gear. We had picked up some vegetables, a little lime and salt, plus a bottle of Tapatío Hot Sauce. But no protein. That we’d need to catch, but I was confident.

My companions for the trip were Hank Gaskell and Malia Lauer, surfers, spearfishers, divers, and kayakers. I’m more at home in the mountains, but Hank and Malia pretty much live off the sea, both literally and figuratively. At their home in Hawaii, they have a garden and the ocean. I don’t think they ever buy food.

The Channel Islands are an hour’s ferry ride from California’s mainland shore. They are formed of eight islands, five within the Channel Islands National Park. From north to south they extend for 160 miles. We were heading to Santa Cruz Island, the largest in the archipelago. It’s 22 miles long and measures 6 miles at its widest point, and is around 96 square miles in total. Not that we could see it through the morning fog that hung eerily across the island. The ferry ride had been short but energetic; the Pacific swell is pretty big out there. But as the sun burned away the mist, the island’s contours clarified. We saw towering sea cliffs, strewn with the entrances of hundreds of sea caves, and secret bays with golden beaches. 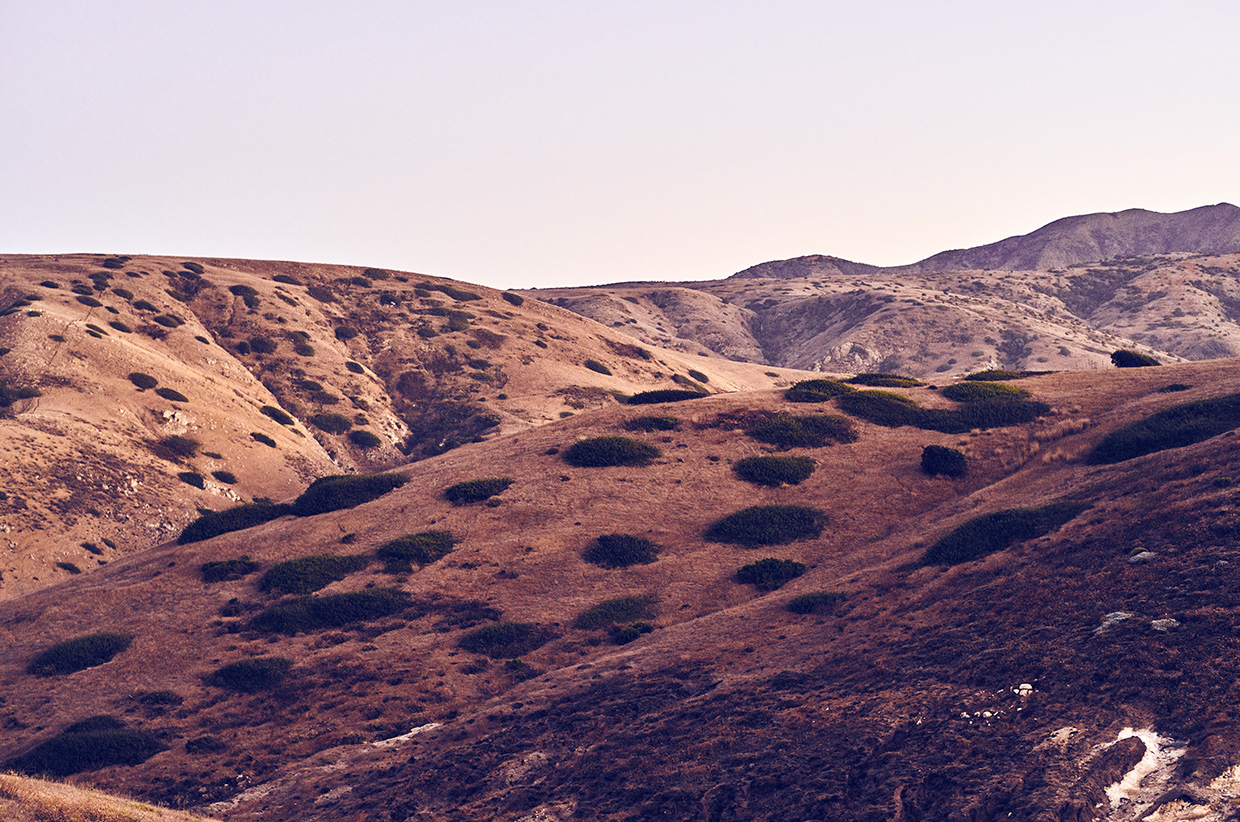 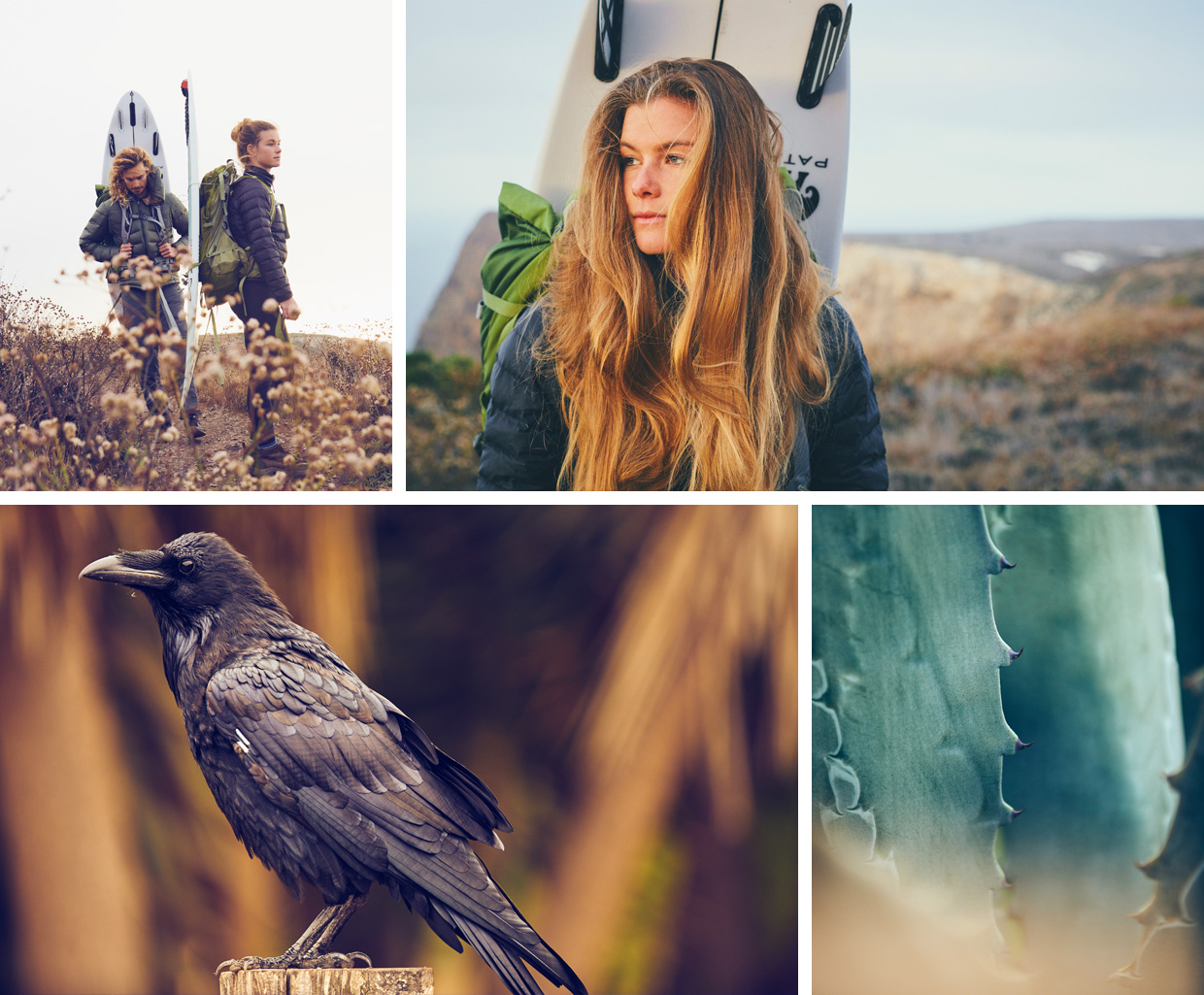 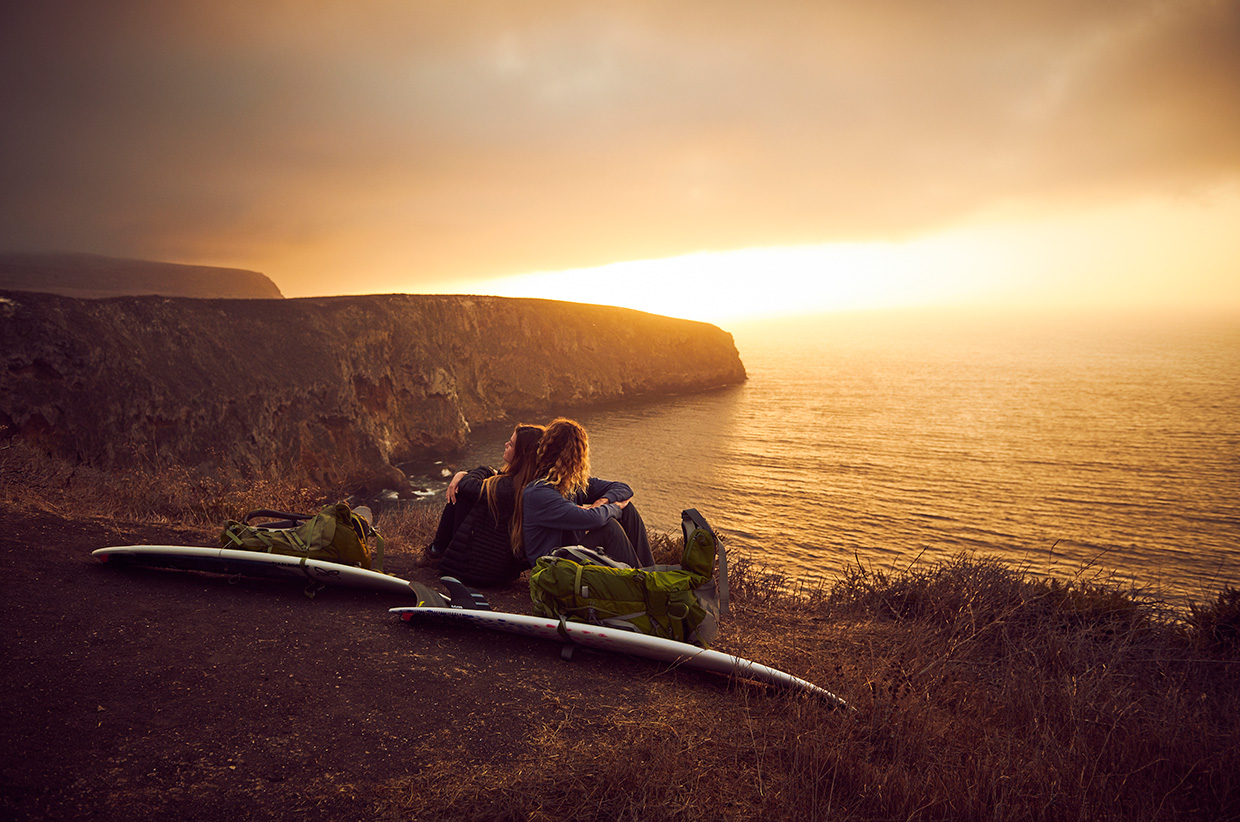 We landed at the small harbour and unloaded our gear. Of the two camps, we stayed at the lower one, in the shade of a eucalyptus grove, and were smitten by its majestic trees. Every time the wind picked up, it smelled so intensely that Hank said it made his nostrils smile.

We made straight for the water, and the chill of the Pacific in September, this far out to sea, took us all by surprise. The water, the land, everything, felt so different to the mainland. Despite the cold, we were out on the sea for hours. In our kayaks, we explored the outcrops around the island and the caves. We saw dozens of fish, stingrays, and lobsters (out of season, unfortunately). We found a particularly large underwater cave, but in the shade the water temperature dropped 30˚C. I’d never experienced anything like the shock of that cold before. The frigid water also affected how Hank and Malia freedived, how they held their breath. We returned to camp, somewhat licking our wounds.

Back on land, we headed up to the high point of the island. From there we could see the island stretch into the horizon, teeming with life. There were lizards and birds, island foxes, and then everything in the water. Seals sat on rocks, casual observers to a feeding frenzy of birds hunting crayfish frothing the sea beside them.

Santa Cruz hasn’t always looked this way, but it’s not been a wilderness for millennia. There were people living here at least 10,000 years ago. In the 16th century, the Chumash Indian tribe, who knew it as Limuw (‘place of the sea’), lived off the marine life and traded successfully with tribes on the mainland. Yet, within 40 years of the first Europeans landing there, guns and germs saw the last Chumash leave. By the 1830s, it was a prison, and by the 1850s, most of the island was dedicated to ranching; first sheep, then cattle. There was even an unsuccessful foray into oil exploration. A century of unbridled overgrazing decimated the island’s flora and fauna. The last sheep left in 1999, and the last feral pig in 2006.

There were lizards and birds, island foxes, and then everything in the water. Seals sat on rocks, casual observers to a feeding frenzy of birds hunting crayfish frothing the sea beside them. 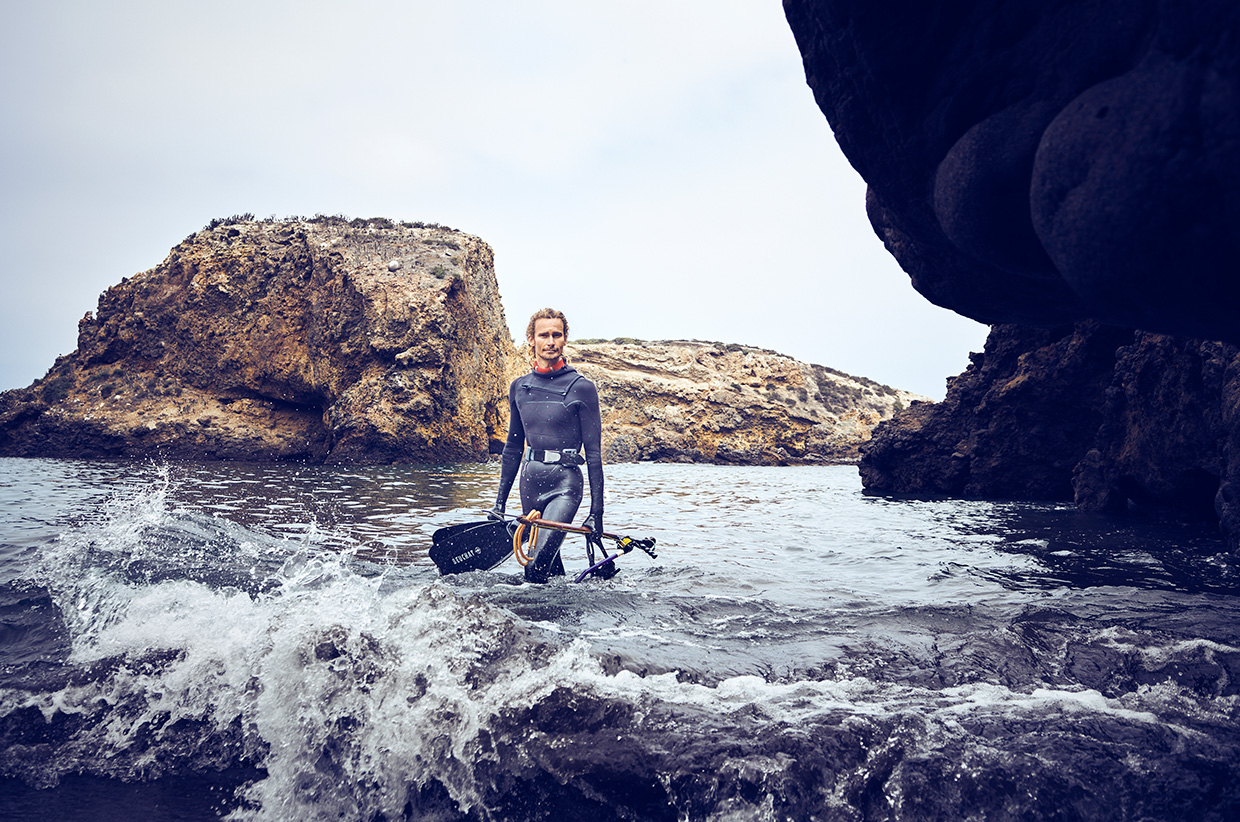 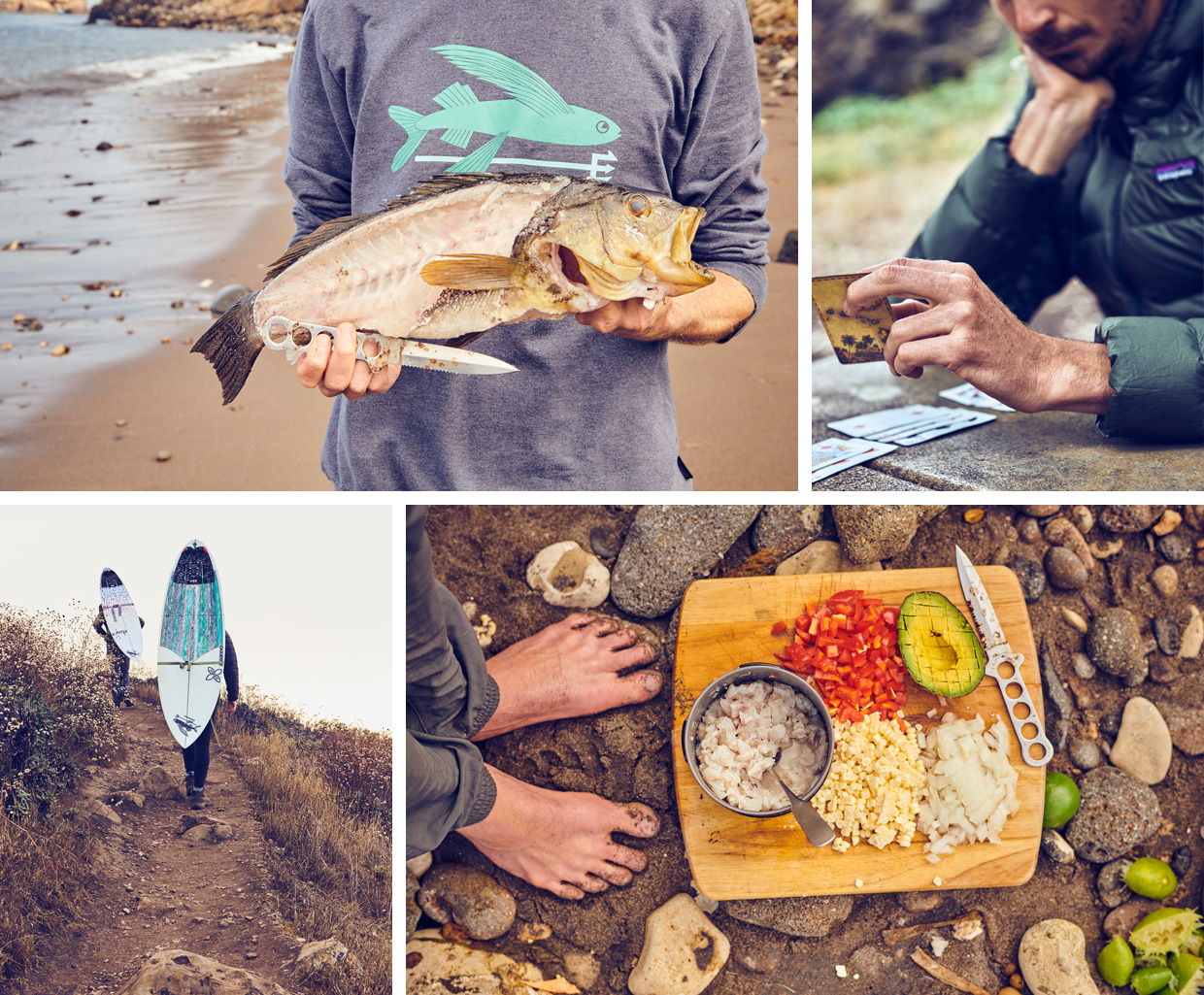 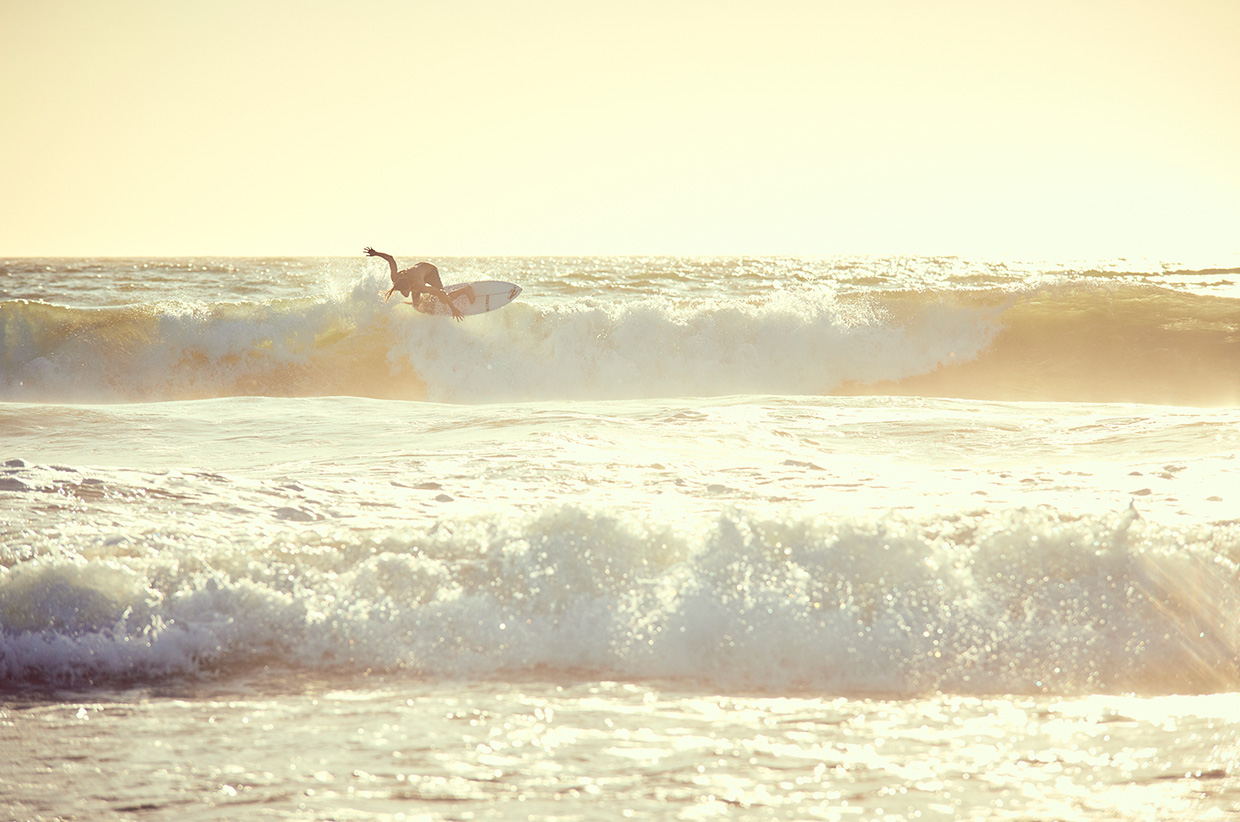 We watched a hazy, shimmering, huge, round dinner plate of a sun, an insane Californian sunset. We watched it dip and then I stayed and watched the stars come out, totally alone.

That evening we hiked out to Potato Bay for sunset. From there, we saw heartening signs of recovery. The colour and the shrubbery had returned. And according to the ranger we later spoke to, the conservation had brought unexpected surprises in the plants and flowers that paint the island in spring. We watched a hazy, shimmering, huge, round dinner plate of a sun, an insane Californian sunset. We watched it dip and then I stayed and watched the stars come out, totally alone.

The next morning, the sun was shining but our stomachs churning. It was time to fish. We kayaked out beyond the restricted zone, and among the tall, thick forests of kelp we found scores of Calico bass and sheephead. There were baitfish everywhere. Hank and Malia were hopping in and out of the kayak like a car.

On one dive, Hank and I heard the speargun go off. Malia appeared and started pulling the line. We weren’t sure she’d caught anything as the line went slack, but bubbling through the water, a fish came into view. It was a big one; a three-kilo California sheephead, a wrasse native to the eastern Pacific Ocean. It was exactly the fish we’d expected to see among the kelp forests off the Californian Channel Islands. We had our lunch.

We went back to the shore where Hank and Malia prepared ceviche. They brought out red bell pepper, corn, cucumber, onion, avocado, and seasoned it with lime, salt and Tapatío. They served it on tortillas and it was just as fresh as could be. And delicious. It’s such a different experience when you’re out for a day, and you’re hungry, and you just pull your food out of the water. 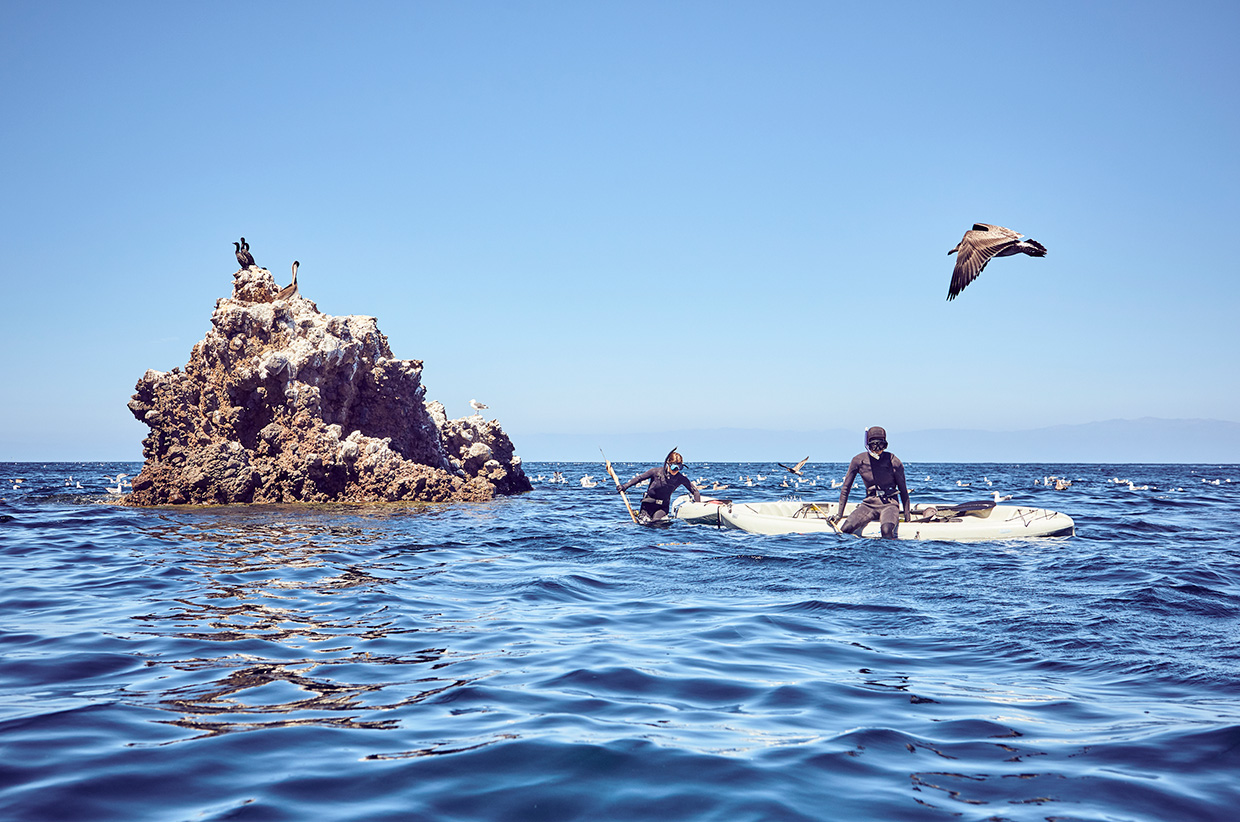 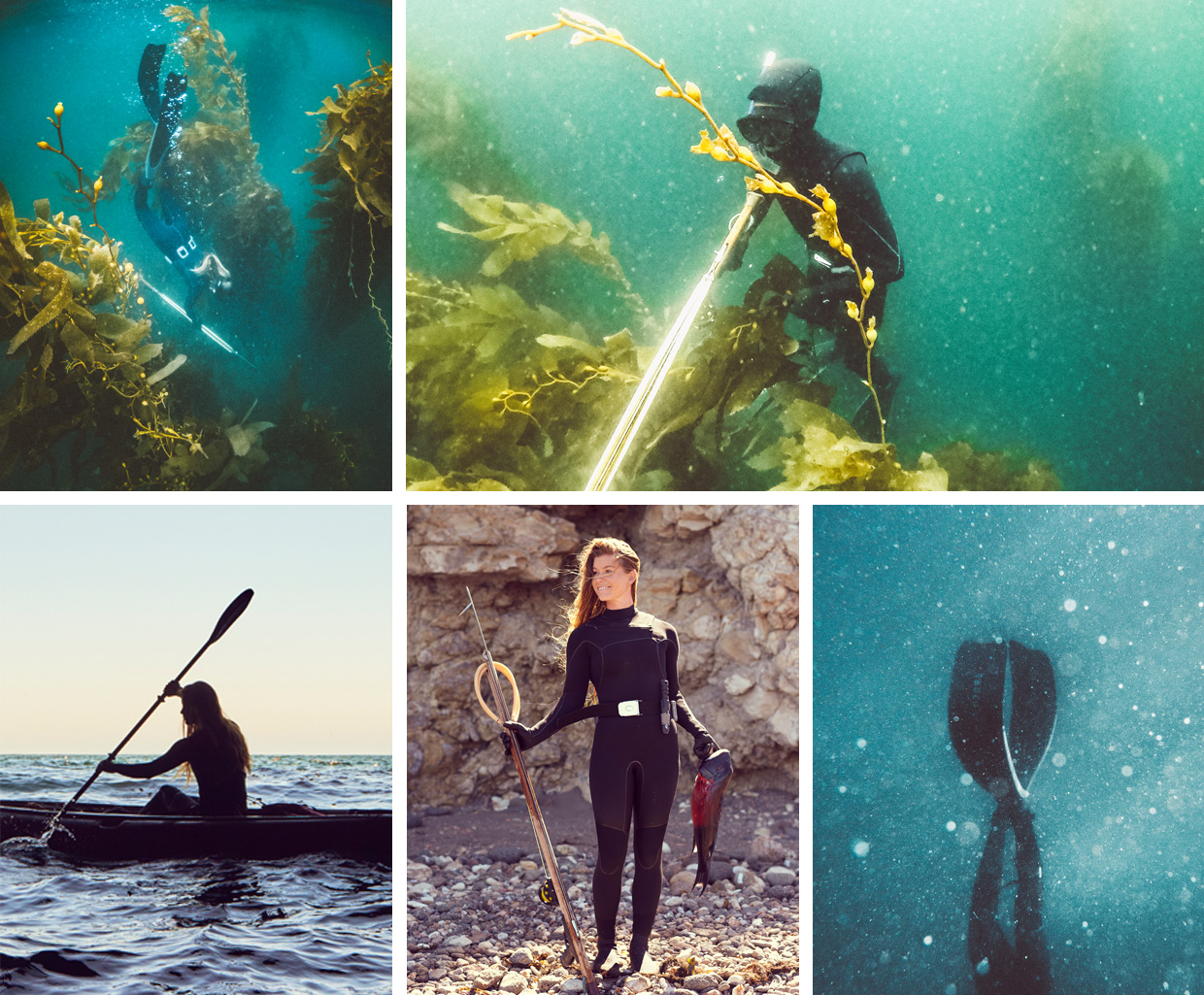 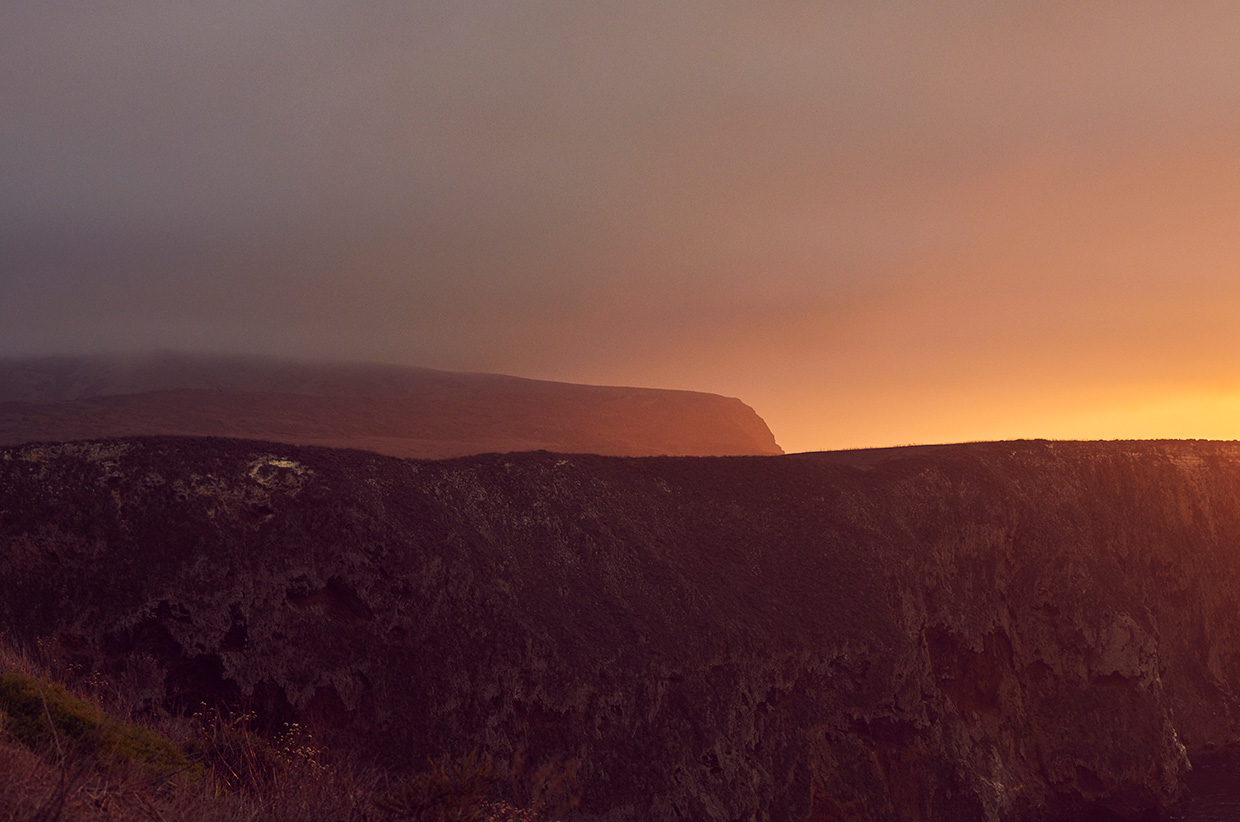 Very quickly I realised that living in New York City and spending most of my time in the mountains and the forests, spending time around the water with two great people who can fish, who know a lot about what to find in the area, about what you can eat, was an incredible feeling. If you live by the ocean you don’t need much at all – there are just so many different types of food. It also became clear that if you live sustainably, you need the ocean. If you were to lose that resource, it would be devastating.

To be able to hunt, and find your food by freediving, was mind-blowing. Over the coming days we caught Calico bass and more sheephead, and ate them fresh, right out of the ocean. But perhaps the biggest thing for me was being by the ocean, on an island, where you’re surrounded by the sound of the ocean every day, morning, noon and night. The Channel Islands defied expectation. To experience it with Malia and Hank, who can just pull lunch out of the sea, was incredible. It’s only a small island, but I’d go back because I only saw such a small portion of it.

The protection and preservation of the National Park’s biological, cultural, and historica resources is a major mission of the National Park Service. Please respect and protect the islands by leaving no trace and only fishing outside of the marine reserves. For more information, visit: nps.gov/chis/planyourvisit/

Jay, Hank and Malia travelled to the Channel Islands with Island Packer Cruises who’ve been cruising the California Channel Islands for Education, Recreation and Research Since 1968. To reserve a trip, book a cruise or for more information visit islandpackers.com and follow them on Instagram:
@islandpackers

Sea Kayaks supplied by The Channel Islands Kayak Center who offer a host of kayaking activities, from local kayak and stand up paddleboard rentals to guided kayak tours around the world famous Channel Islands. For more information visit cikayak.com and follow them on Instagram: @cikayakcenter

Tuff-Inish Where The Locals Play 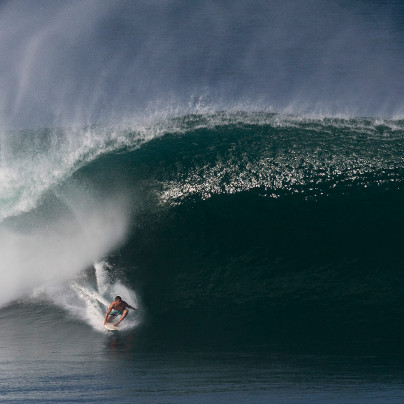 I Belong To The Ocean Cat Vinton 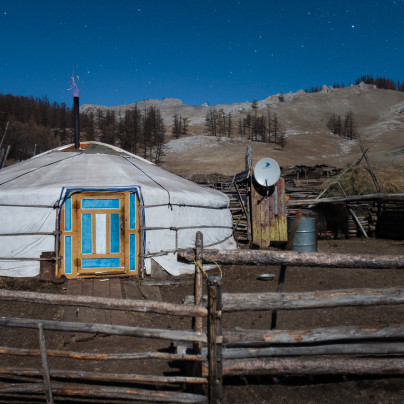 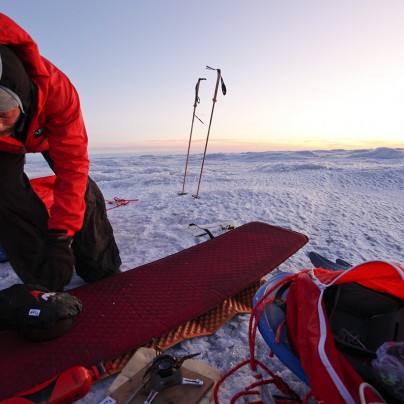 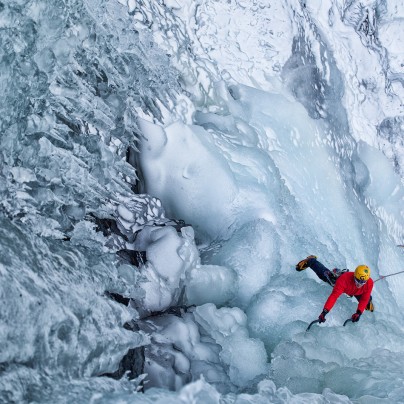 That Feeling Of Life Tarquin Cooper // Photography by Jon Mancuso