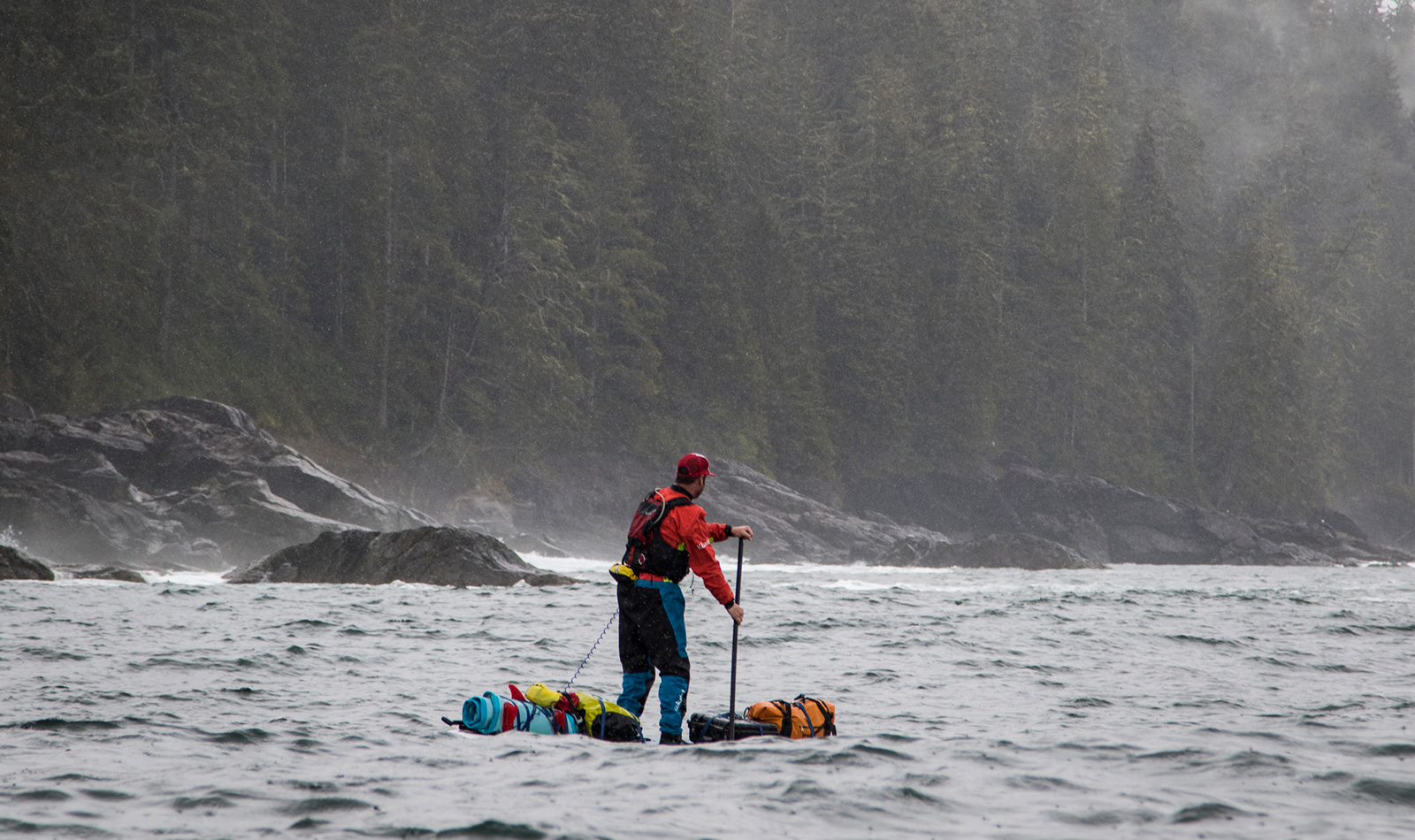 Rumours reverberated off the cabin walls of mysterious and inaccessible waves just down the coast. We drank another whisky, listening to the stories from the guys wearing Stanfields who called the gritty little resource town at the end of the road home while heavy rain drilled into the cedar roof shakes. Hoping another drink would loosen the location of this secret emerald bounty, we poured our new friends another, though I was not optimistic about this tight-lipped community of hardcore loggers and surfers where solitude is prized. On this rugged coastline, even the residents don’t acknowledge each other’s presence out in the line-up. If we wanted to surf here, we would have to find it for ourselves.

Shooting a narrow gap, open ocean swells need a very specific direction of travel to produce surfable waves in the strait off Vancouver Island. Winter storms from the Aleutians drive swells from a more north-westerly direction, which can light up this section of coast if it’s not too stormy. So, when a late-season swell appeared on the charts early last April, it was time to search for our own slice of surfing solitude.

I have explored the coast from the few points accessible by road and the muddy, ramshackle hiking trail traversing its length, but accessibility to the actual shoreline is the issue. Hemmed in by steep sea cliffs and deep river gorges, even the huge Sitka spruce and red cedars that crowd the shoreline are held back from the surf. In light of this, we take to the water to maximise our capabilities.

Beginning at a small First Nations reserve, the swell is already starting to awaken deep in the back of the bay with playful little waves reeling down a sandbank at the mouth of a wide river, and we can’t help but catch a few rides to start the trip off. We could surf here all day, but as conditions deteriorate we strap dry bags and waterproof cases to our paddleboards and set off, laboriously, into a steadily increasing headwind. Searching for any respite from the gale, we duck in and out of small bays and discover a green oasis. Obscured behind large cedar branches drooping under the weight of moss, an airy amphitheatre draped in ferns and hundreds of shades of green provides a temporary refuge from the struggle.

Three hard hours of paddling bring us to the mouth of the fjord where, instead of rounding the broad cape, we enter a labyrinth of sea stacks, channels, and tunnels seething in the open ocean swell, hoping for a shortcut.

In a game of cat and mouse riding swells, we take turns waiting for water to fill over a shallow reef, then paddle speedily to cross it before the water is sucked off or a larger wave breaks. Bull kelp forests dance with the surge, mesmerising us. The waves grow in size. Pushing hard to clear a narrow channel, we pop out into the open ocean with a welcome tailwind and a rising tide ferrying us south towards our unknown destination for the night.

Searching for any respite from the gale, we duck in and out of small bays and discover a green oasis. Obscured behind large cedar branches drooping under the weight of moss, an airy amphitheatre draped in ferns and hundreds of shades of green provides a temporary refuge from the struggle. 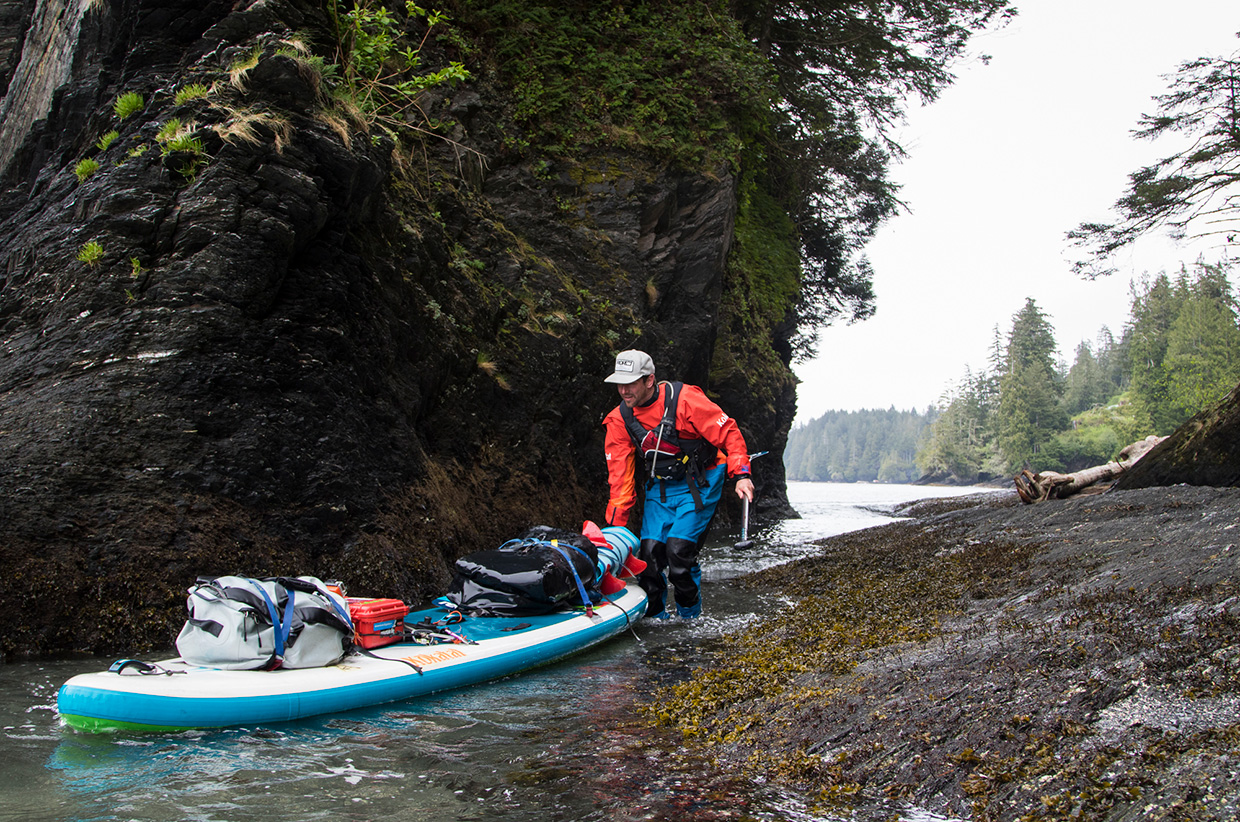 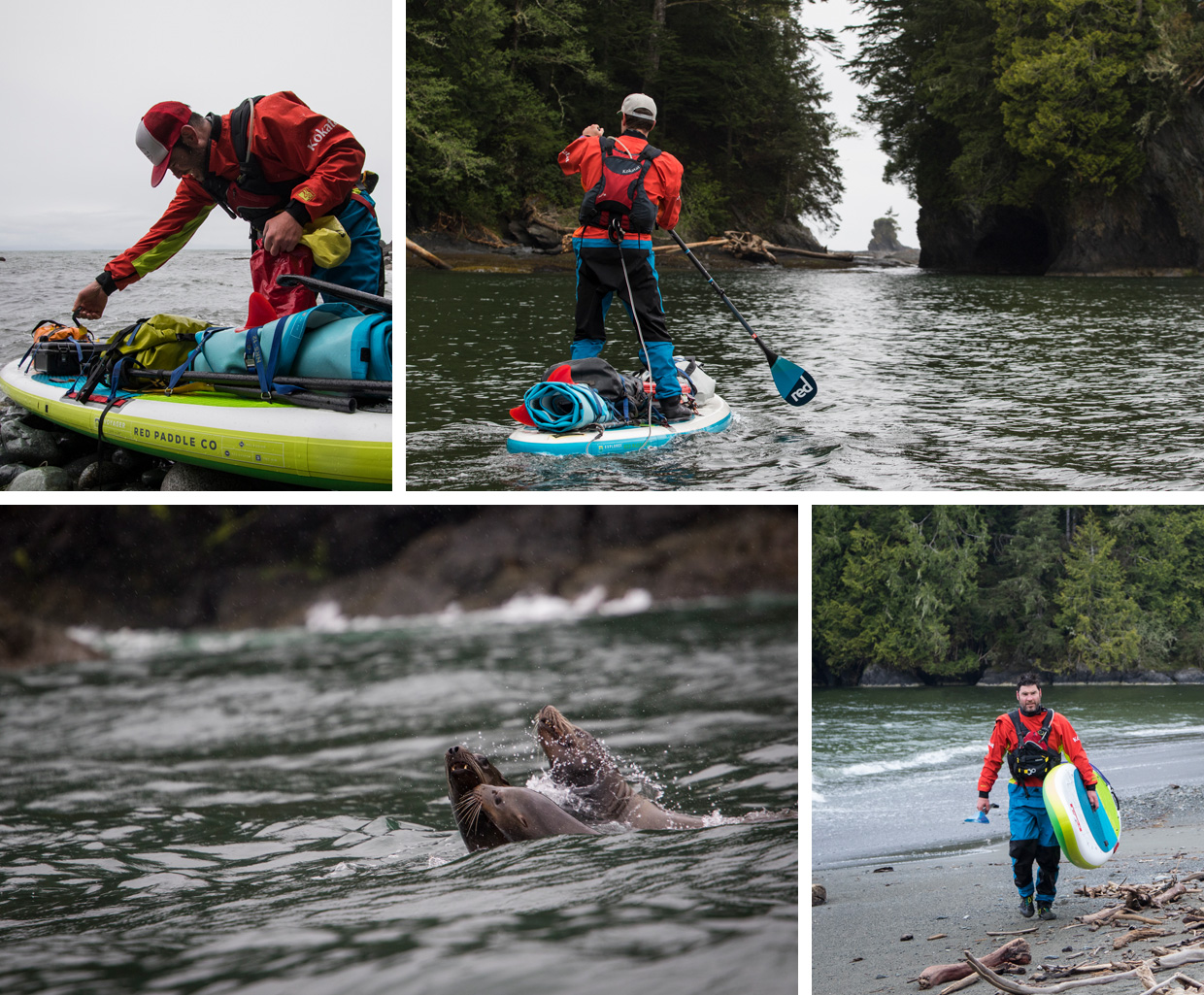 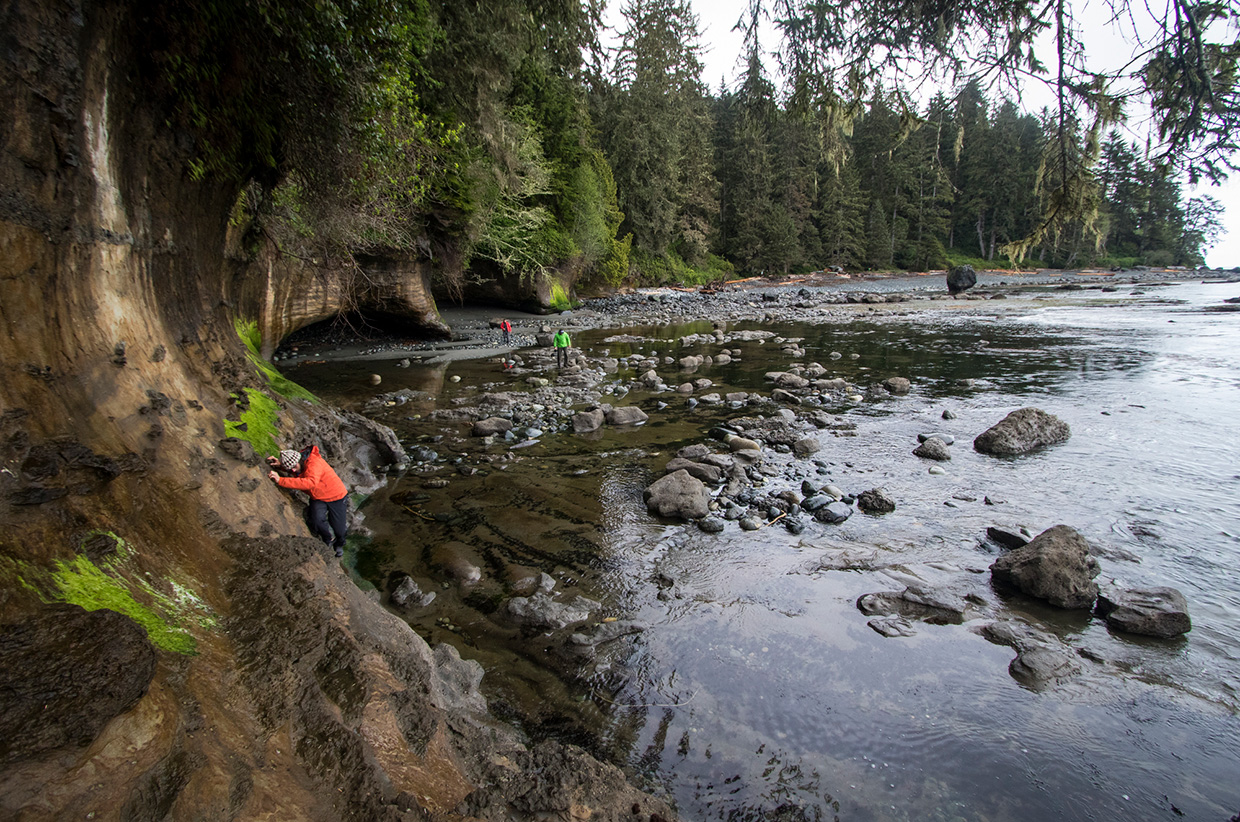 A natural dispersion draws us apart. The now steady drizzle and oppressive heavy fog drive us into our hoods while the rhythmic paddle strokes lull each of us deeper into our own worlds of thought as only a long-distance paddle can. The swell is still rising – and, at points when in the trough of the wave, I can see nobody in the group. Alone in liquid canyons of pure ocean power, I feel a simultaneous calm and unease thinking of my vulnerable position this far out to sea.

Escorted by a raucous raft of curious Steller sea lions, we find a steep pebble beach that will be our home for the night. The tide is low, and, unsure of how far it will reach, we scratch a small refuge for tents between the massive driftwood logs and the tangle of thick waxy salal bushes.

The coast takes on a new perspective from nearly a kilometre offshore. Ancient Sitka spruce tower above the canopy, like rampart sentinels dominating the dense temperate rainforest that stretches along the shore in an unbroken mass of deep green until an elevation gain brings an abrupt end to the beauty. Scratched to the skyline is a patchwork of cutblocks, forming an ugly and unnatural scene – like a drunken haircut. The mark of human progress has not been kind here. We paddle closer to shore to scan the reefs and points for waves, and the cutblocks slowly fade from view, blocked by the natural forest of the riparian zone. We had expected to find other surfable waves at the many rivers and points along the way, but had seen none.

Although it looks familiar, none of us recognise the rocky beach we paddle towards. Sitting outside and timing the sets, we sneak in to the beach without incident and pull our heavily laden boards to safety amongst the slippery boulders. This rocky beach is accessible by road and a 1km trail – quite accessible by Vancouver Island standards, a fact demonstrated by the other campers and surfers. We erect tarps in the now heavy rain and somehow get a fire going from the sodden driftwood as the last of the dull light fades into inky blackness. We eat by the fire, talking of past surf exploits, epic winter swells, and how it’s getting busier and busier in the water each year.

The day dawns grey and calm, adding an oily finish to the rolling sea. The waves look good out front, and knowing that the waves (and crowds) will grow with the tide, we paddle out early. For the first hour we surf by ourselves, but slowly our group of four becomes outnumbered six to one, sharing the single reef peak. It’s time to move on.

On our transit south, we paddle past waterfalls tumbling from sandstone cliffs as the waves expel their energy in giant explosions shooting water and foam skyward from caves. This stretch of coastline is beautiful but holds none of the shapely peeling waves we had hoped for. Escorted by a raucous raft of curious Steller sea lions, we find a steep pebble beach that will be our home for the night. The tide is low, and, unsure of how far it will reach, we scratch a small refuge for tents between the massive driftwood logs and the tangle of thick waxy salal bushes.

With the last of the evening light, gingerly climbing on the slippery cliffs and careful not to fall into the cold water, we explore arches, sea stacks, and the abundance of life. Tiny succulents cling to cracks in the volcanic rock in beautiful natural gardens while the round tide pools are bursting with a staggering diversity of aquatic plants, fish, and crustaceans.

As the tide rises throughout the evening, an oddly shaped sea stack takes on the appearance of a large black egg floating effortlessly on the surface of the water, but our attention is drawn by the set waves that begin to roll past the triangular-shaped rock reef at the south end of the small bay. We hope that the swell will keep rising with the tide. Our anticipation for the morning grows. 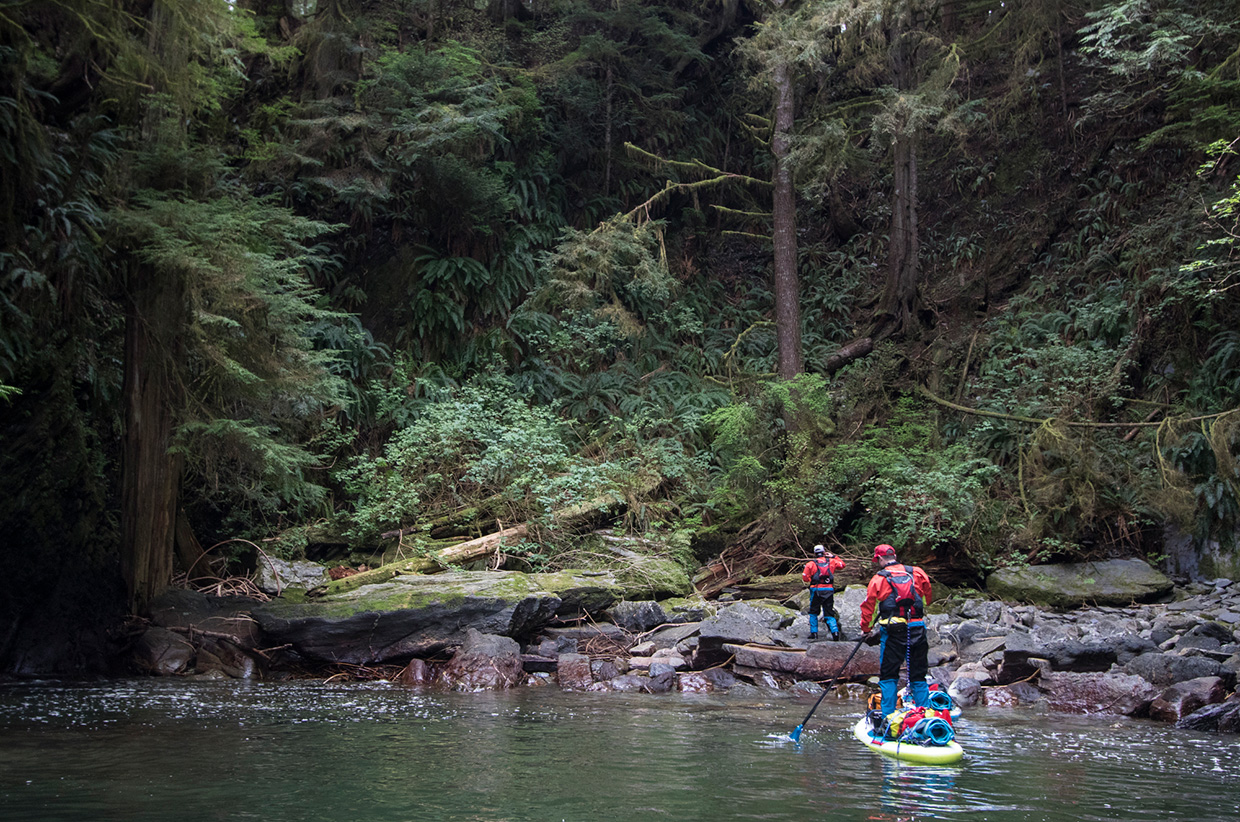 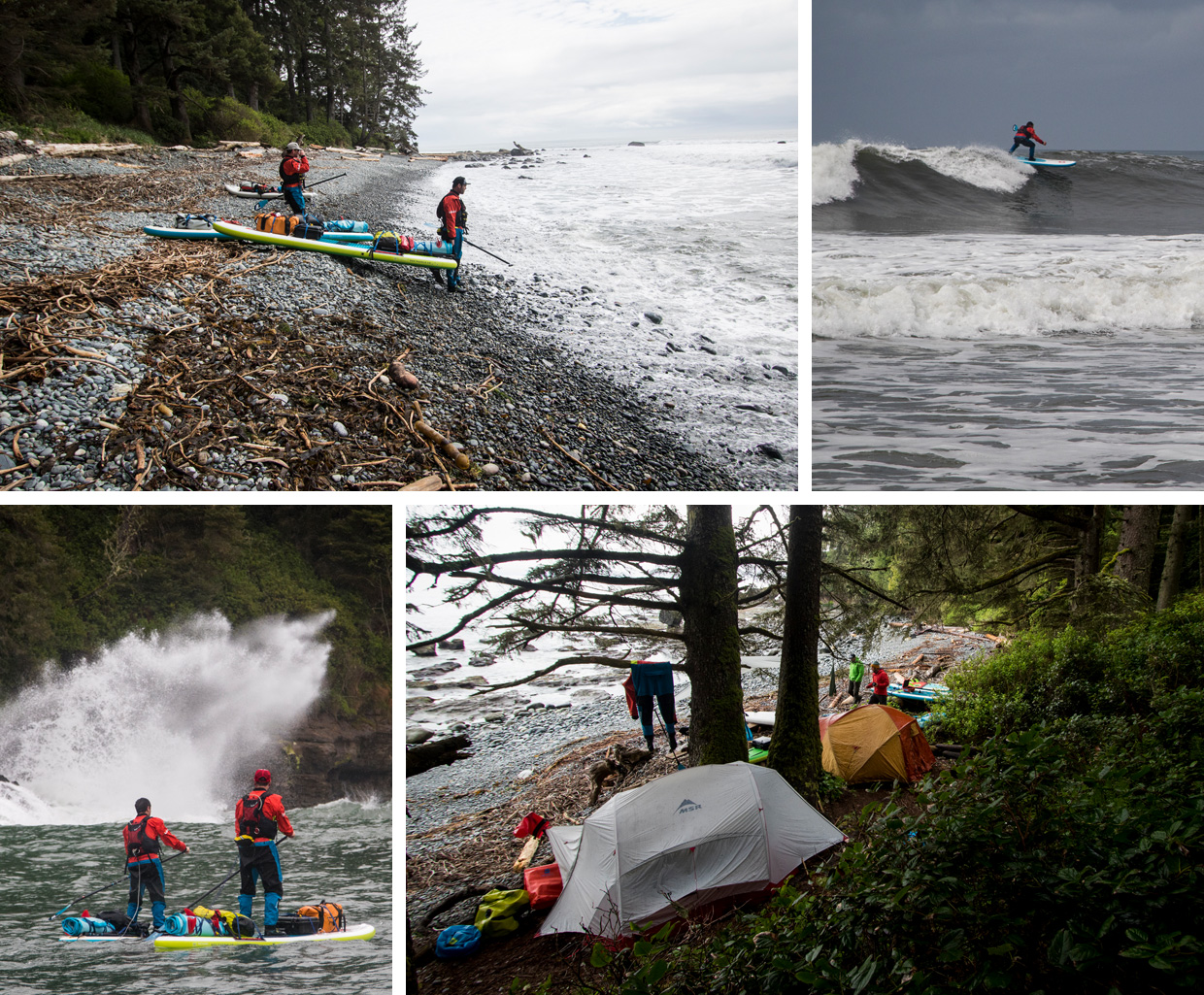 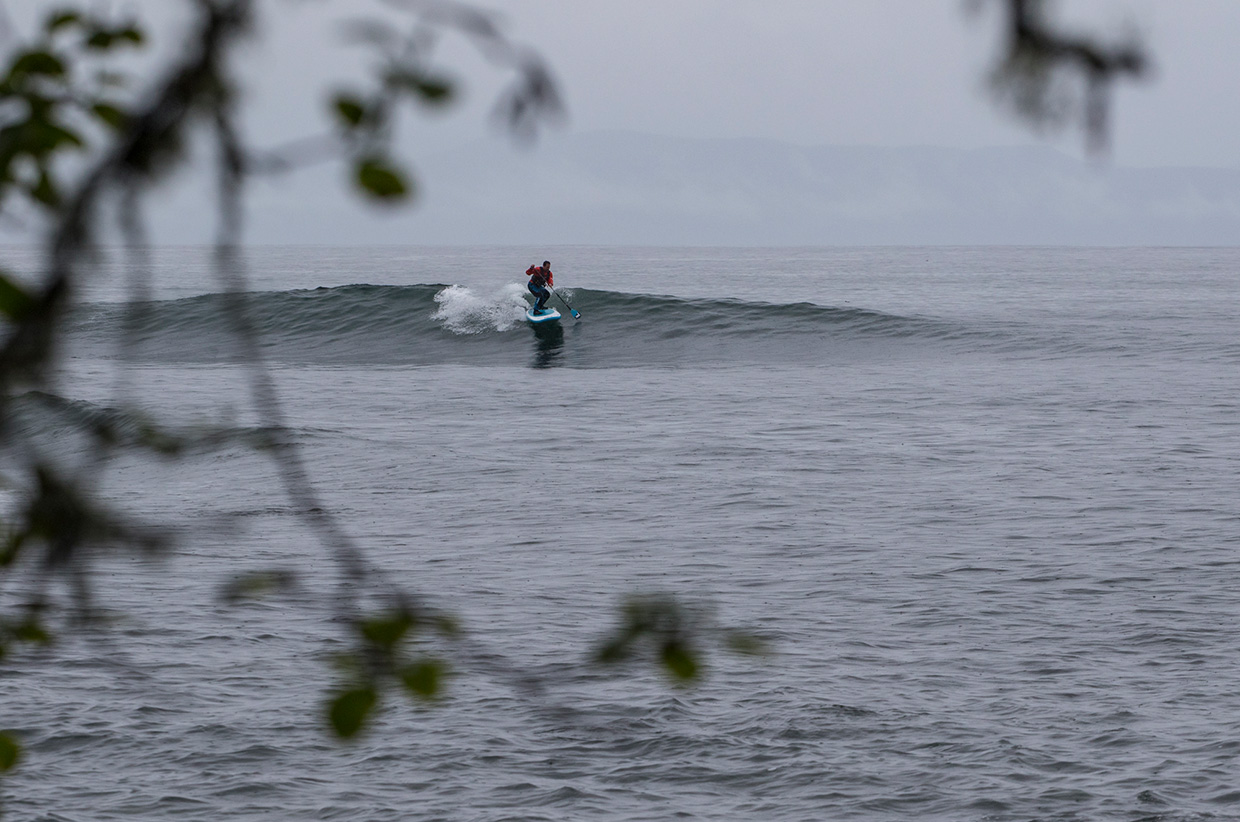 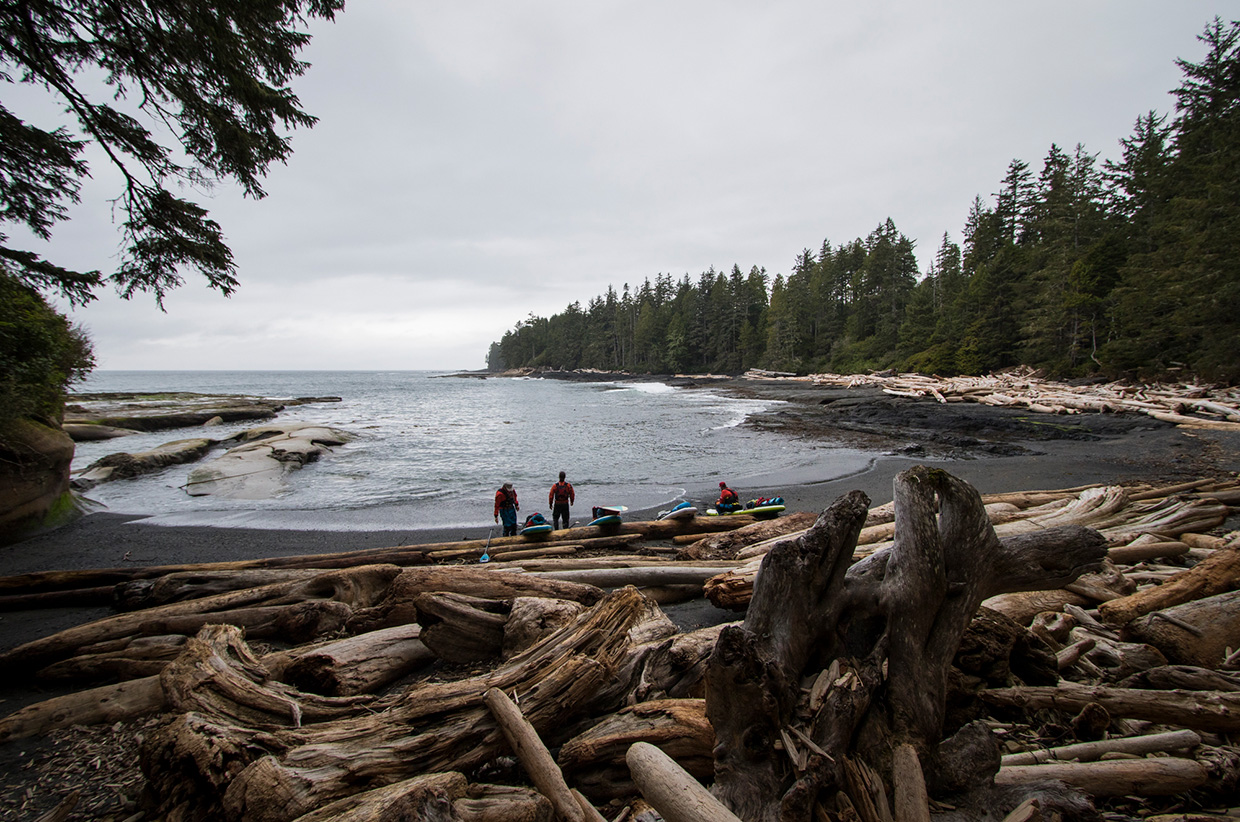 In the dim light of another foggy morning, my sleepy eyes have trouble focusing on the incoming waves. Beginning as nothing more than a dark shadow, gradually lured upwards by the shallowing of the reef, a wave rises abruptly. Like the wings of a great emerald bird expanding out in both directions, it unleashes a great plume of spray like liquid thunder and peels off in both directions from its peak, expending its energy gathered thousands of miles away from a distant storm born in Aleutian fury. I find it hard to sit idly by, sipping coffee, but as we had seen the night before, the waves would get bigger with the rising tide. There are also a few too many boulders poking their shiny heads out of the water just below the face of the wave. So we wait. Impatiently.

Dropping into the first unknown wave at a new spot is always the most exciting. If you are able to hold on after the steep drop, the following section is hard to make as the crest folds down on itself – dealing out a savage beating as it drags you under, tumbling you helplessly along the kelp-covered reef. After a few attempts, we figure out that a high line on the face seems to be the key to unlocking the pass to this freight train. As our confidence grows with wave after glorious wave, we begin to get bold with cutbacks and stalling behind the crest looking for a rare hollow section.

In between sets is a time for reflection and to recover breath – our solitude achieved. Looking back to shore, the tall trees lining the bay encircle us in our own perfect oasis. The only sign of humanity is our small colourful tents starkly contrasting against the deep temperate-rainforest green. As the thick kelp forest grooms the swell into perfectly smooth strands of aquatic glory, another set approaches and jolts me out of my reverie.

This coast seems to hold its cards as close as the locals and ends up being just as temperamental. An hour either side of the ideal tide and you would never know that a nondescript reef could create a perfect, elegant wave. I couldn’t help but wonder how many of these magic spots we had unknowingly paddled past on our transit along the strait. It would take years of exploration to unlock the intimate knowledge needed to score consistent waves here. We are fortunate that the ruggedness had let us in on a small slice of her graceful beauty, and I doubt that had we encountered any locals they would be as welcoming.

Looking back to shore, the tall trees lining the bay encircle us in our own perfect oasis. The only sign of humanity is our small colourful tents starkly contrasting against the deep temperate-rainforest green. 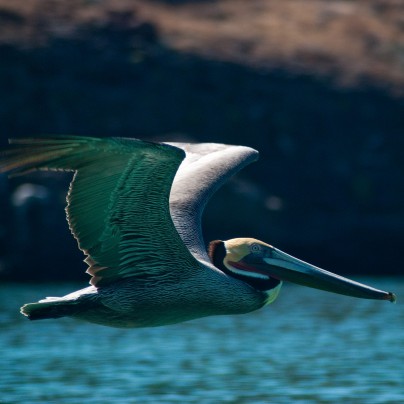