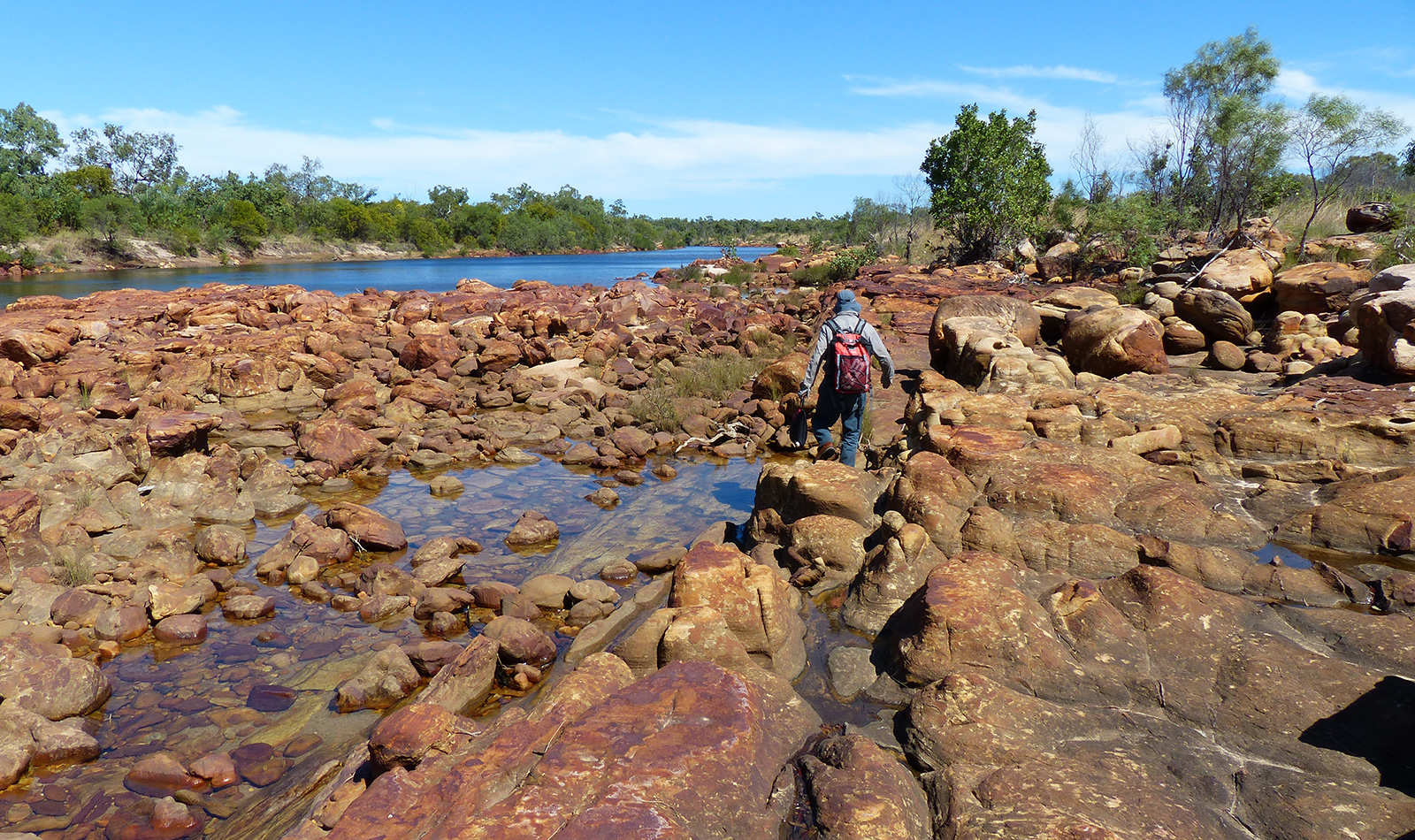 The River With No Name

When I first saw the thin blue line on the map, I knew two things for sure: I was looking at one of Australia’s last unexplored rivers, and there was no way in the world I was getting in or out of there without a helicopter. I also thought it was a terrible shame that topographical maps never show you exactly where the ravenous, five-metre crocodiles live.

Australia’s Kimberley wilderness is the perfect place for an epic adventure. With a total area three times the size of England and a permanent population of less than 50,000, it’s a wild and empty land. Its habitats include tropical savannah, stunning waterfalls, rocky gorges, crocodile-infested mangrove swamps, mud flats and small pockets of rainforest.

My 2010 solo paddle down Western Australia’s King Edward River was the first major packrafting expedition ever conducted in Australia. It was during this trip that I became fascinated by another isolated river system, 80 kilometres north of the Mitchell Plateau. On the map, the surrounding area looked incredibly rugged – even by Kimberley standards.

Last year, I chartered a helicopter and had it drop me off on a flat, sandstone ledge in the middle reaches of what I had dubbed ‘The River with No Name’. I arranged with the pilot to pick me up from the same spot 27 days later. From the air, the whole area looked as wild and beautiful as anything I had seen in 25 years of exploring the Kimberley.

My first campsite was directly opposite a wide, rushing waterfall. The water cascaded down the side of the gorge, staining the rust-coloured cliffs a dark grey as it plunged 30 metres into the transparent pool below. The weather was typical for early May in the Kimberley: 37ºC, and brutally humid.

My gear included a satellite phone, a comprehensive first aid kit and a 2.2kg inflatable packraft. As the Remote River Man, I’ve been venturing into the least accessible river systems on earth for three decades. I’ve used dugout canoes and inflatable kayaks, and have even conducted solitary, month-long expeditions on foot. My favourite travel method uses an Alpacka packraft. When not on the water, this tough, lightweight craft fits into a stuff sack about the size of a packed two-man tent. A fit and stubborn explorer with a packraft, a four-piece carbon-fibre paddle and enough food and gear to last a month can investigate just about any river on earth.

I became fascinated by another isolated river system, 80 kilometres north of the Mitchell Plateau. On the map, the surrounding area looked incredibly rugged – even by Kimberley standards. 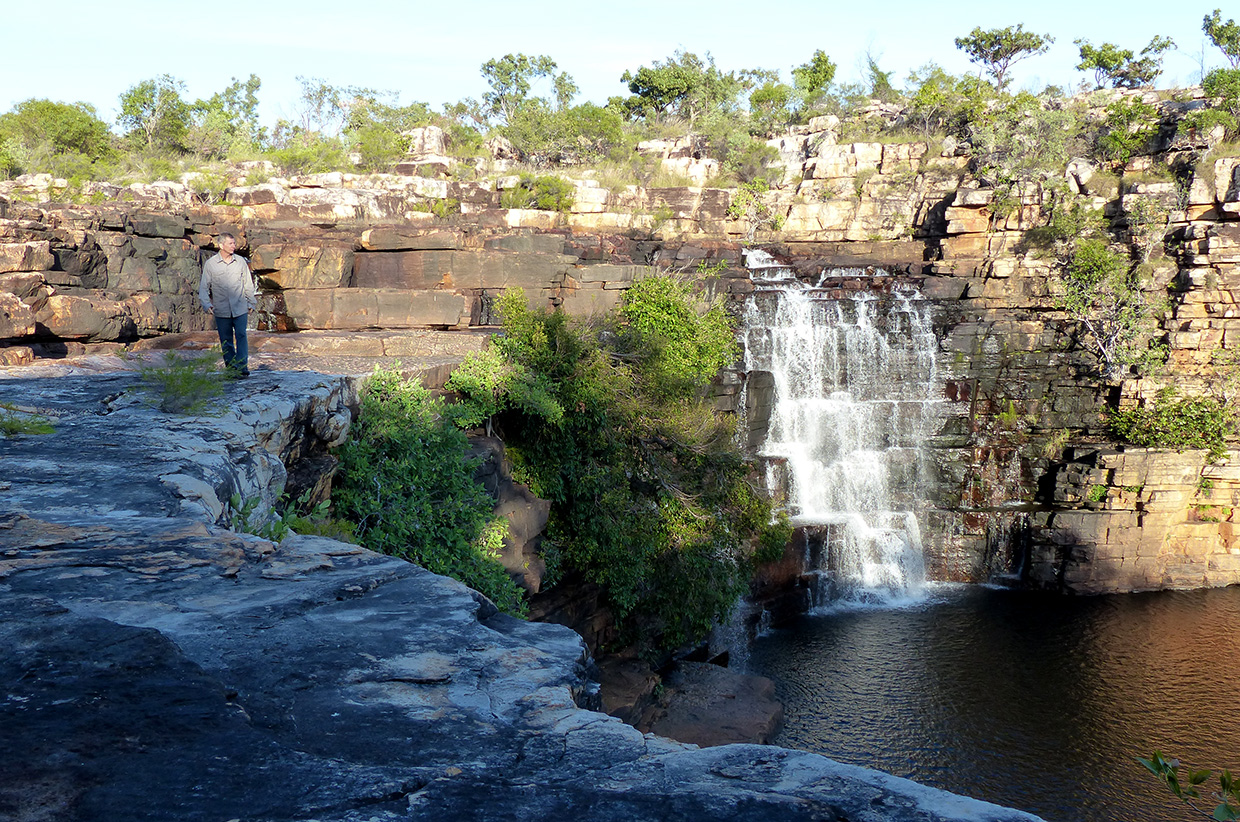 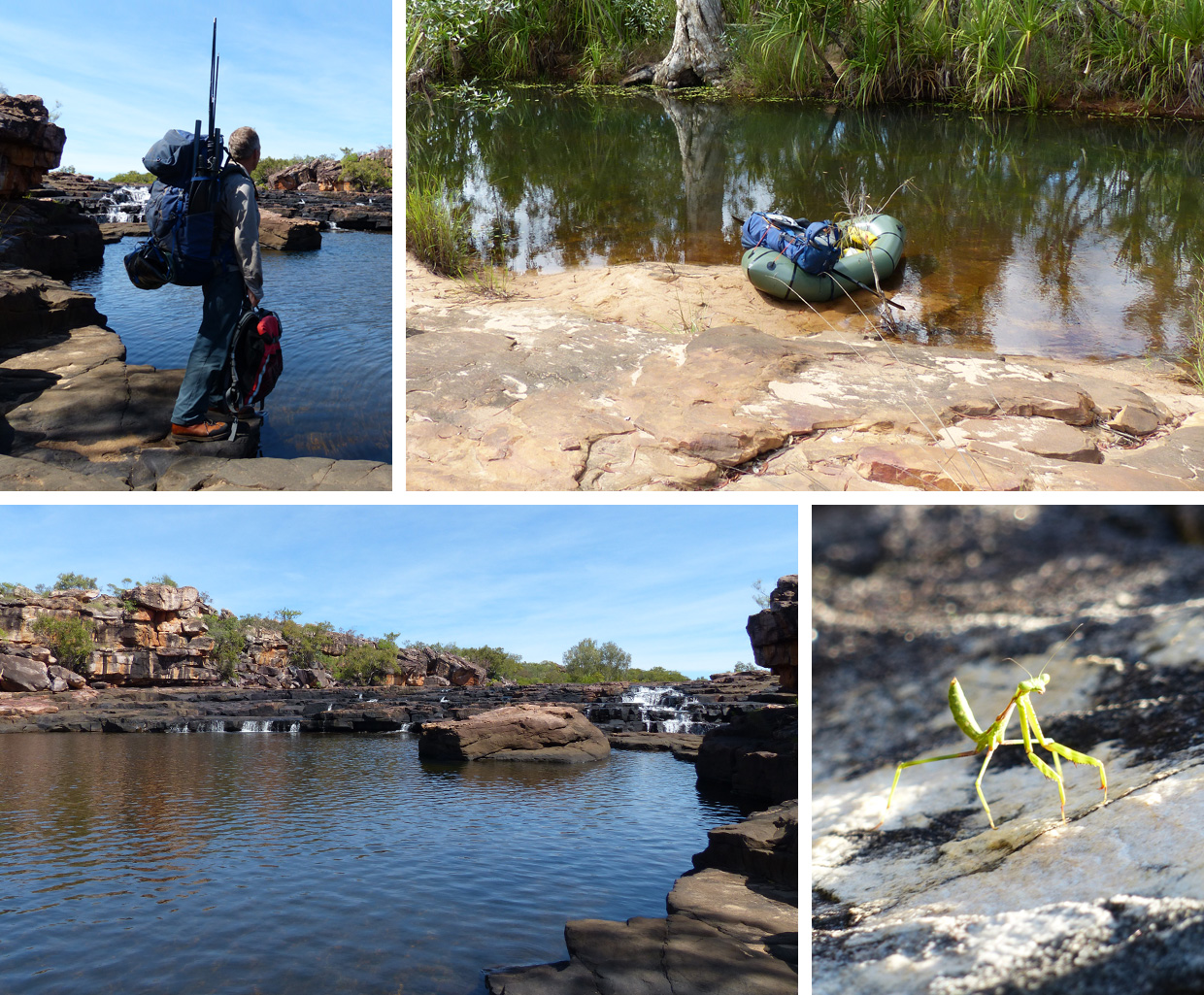 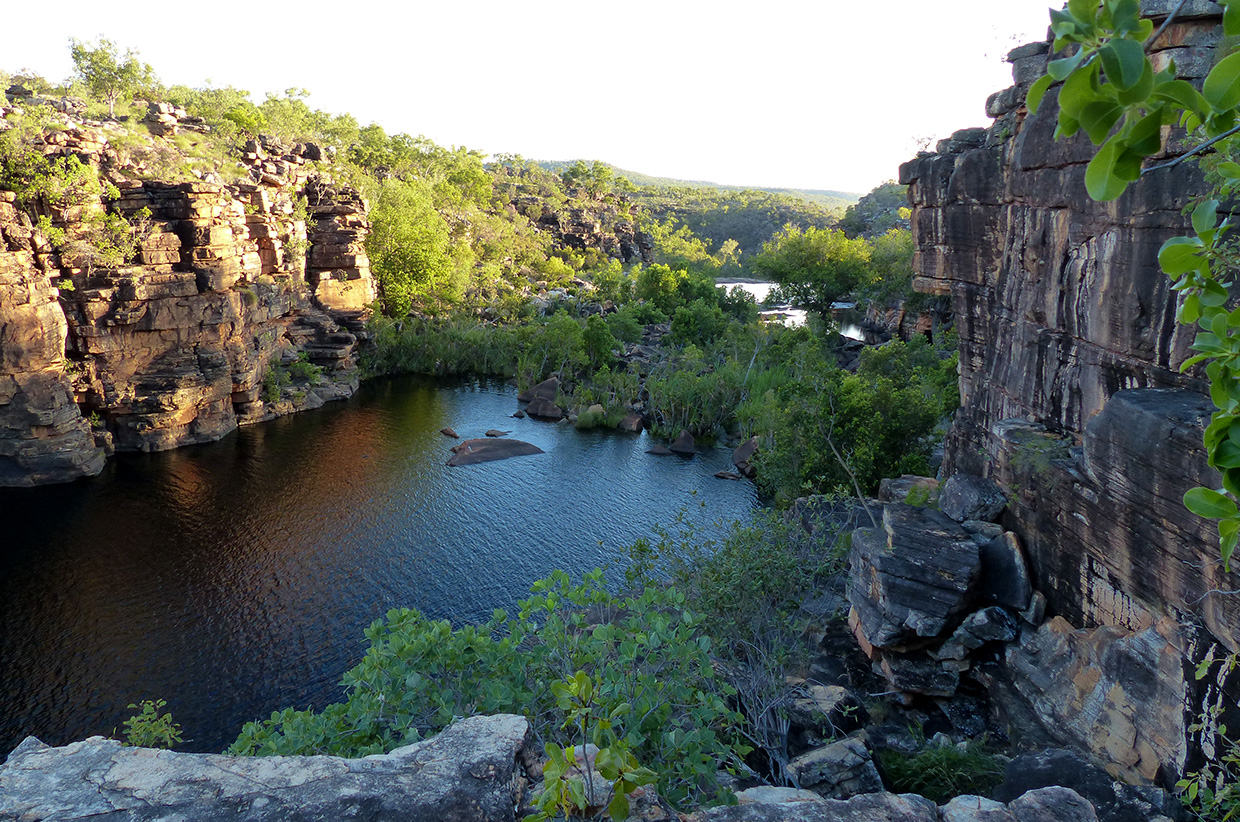 Wildlife was everywhere. Black cockatoos, brolgas and wedge-tailed eagles flew overhead, and I encountered several Merten’s water goannas, a beautiful water python and some rock wallabies at the river’s edge.

The dehydrated food in my 90-litre expedition pack consisted of the usual nutritious but unexciting fare: powdered milk, cereal, nuts, pasta, soup powder, muesli bars and dried fruit. With a small lure or a captured insect as bait, it’s easy to catch black bream on a handline in these tropical rivers, so I had no concerns about protein.

My plan was to venture downstream – on foot and by raft – until striking the saltwater reaches of the river and, eventually, the ocean. I would then have to turn around and return the way I came, to rendezvous with the chopper pick-up. Although the river mouth was only 15 kilometres (as the crow flies) from my initial camp, I knew it would seem more like 40. As I shouldered my massive pack and headed north along the river, I encountered a labyrinth of stony outcrops and deep chasms, interspersed with head-high cane grass. Carrying a camera bag in one hand and a spare food bag in the other, I struggled over tripwire-like supplejack vines and dodged loose boulders.

Wildlife was everywhere. Black cockatoos, brolgas and wedge-tailed eagles flew overhead, and I encountered several Merten’s water goannas, a beautiful water python and some rock wallabies at the river’s edge. Smaller creatures were less appealing; when I brushed past a clump of wild passionfruit I was attacked by a swarm of stinging green ants. Fortunately, the abdomens of these ants have a pleasant lemony flavour when you bite into them; while removing them from my skin and clothing I was able to enjoy a refreshing snack.

For several days the physically demanding gorge country continued, until I finally arrived at the first of a series of long, slender pools. I was pleased that I could now inflate the packraft, stop hiking in the heat and make better time down the river. However, this placid stretch of water also meant I had officially entered crocodile country. At this stage the croc population would be limited to the harmless, freshwater species common in the upper reaches of Australia’s northern waterways. Unfortunately, there was no way of knowing exactly when the adorable, fish-munching crocs would end, and the huge, man-eating saltwater crocs would begin. I wasn’t worried yet, because the river was still well above sea level and there were several rapids between me and the salt water. But having once seen a four-metre ‘saltie’ drag a full grown steer into a Kimberley river, I had no intention of testing my flimsy raft against such powerful jaws once I was in their territory.

The lack of current meant I would be able to paddle this stretch of river on the return journey as well. It also made it easier to control the boat through the encroaching stands of pandanus. Pandanus trees are covered with spiky protrusions that are ideal for puncturing inflatable boats. It’s easy to get caught in a strong current, blunder into a pandanus trunk and spend the rest of the afternoon repairing holes in the raft. 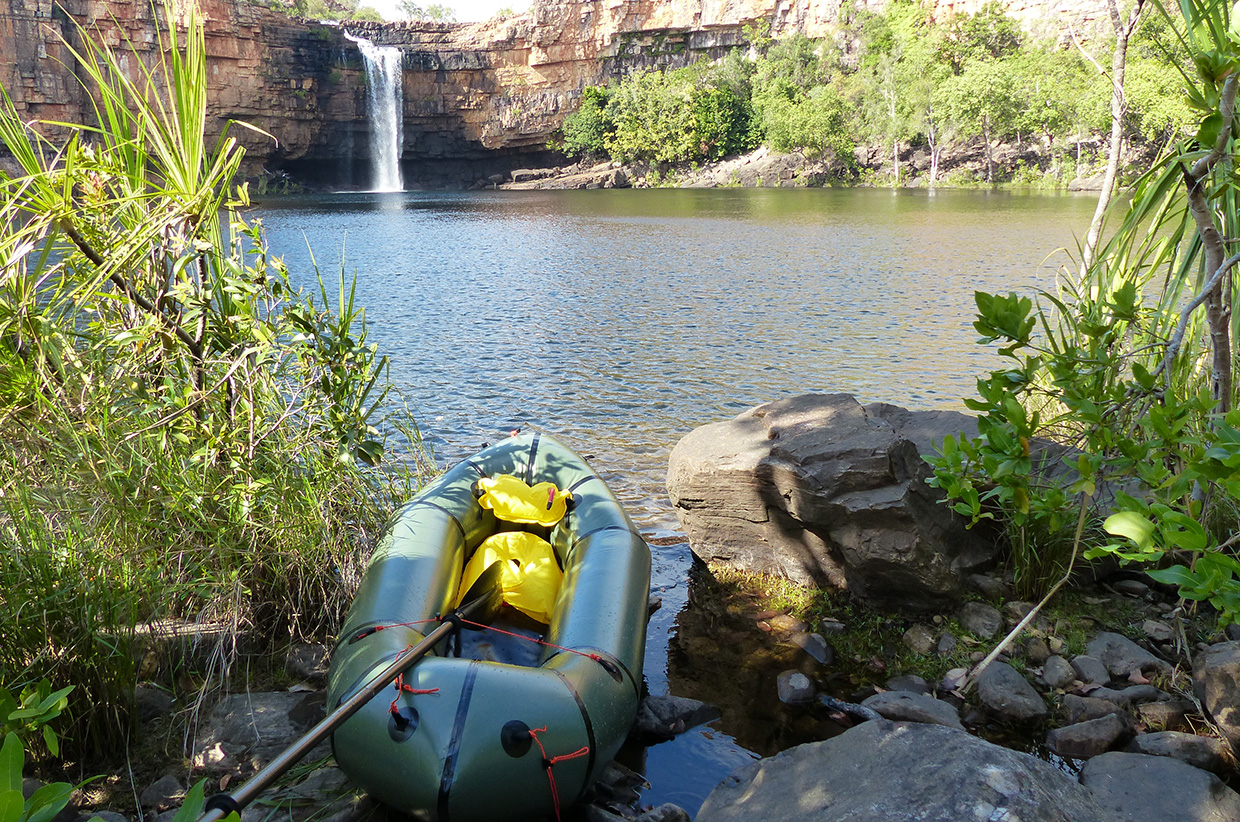 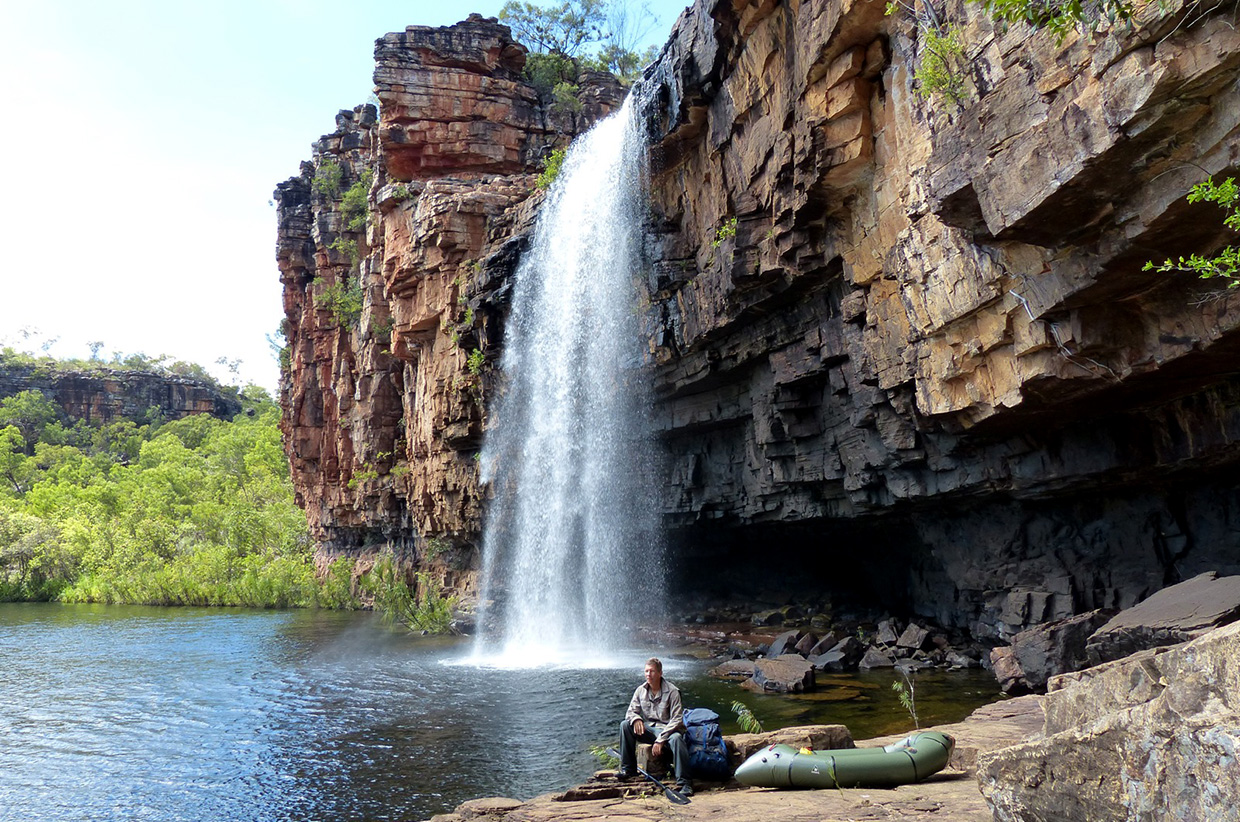 I made good time, with occasional portages around thicker pandanus sections and rapids. With a heavy pack strapped to the front of the raft and my body in the back as a counterweight, running rapids was out of the question. It was safer to hop out and carry the raft and gear around obstructions. When the navigable section ended, the river opened out into a picturesque gorge, hemmed in by huge, square cliffs and decorated with a lengthy set of step-ladder rapids. I made camp in the shade of a 30-metre-high stone block, being careful to position my tent well away from any overhangs. On more than one Kimberley trip I’ve heard big rocks falling off cliff edges during the night, so I never sleep too close to vertical stone walls.

Just past the end of the gorge I encountered the river’s final set of substantial freshwater rapids – the last obstacle separating me from the realm of saltwater crocodiles, deadly jellyfish and tiger sharks. I packed up the raft and took the sensible precaution of continuing to the river mouth on foot. This was much harder than expected, thanks to a jumbled maze of refrigerator-sized rocks that made up the final stretch of terrain. Eventually, I began to notice mangrove trees and small garfish in the water. A thin ribbon of rock across the river mouth created an energetic set of tidal rapids; beyond that was the blue of the sea.

I stood on a ledge three metres above the surface of the bay and soaked in the scene’s grandeur. The bright blue of the water contrasted with the reddish cliffs, and big fish were jostling for position in the middle of the inlet. They looked like large mullet of some kind, but showed no interest in my fishing lures. Fortunately, there were other species around. I spotted a medium-sized mangrove jack at the water’s edge, and noticed a couple of large, silvery shapes further out in the clear water: big barramundi. Within twenty minutes I hooked a gleaming, lunch-sized specimen, and soon had it cooking in the coals. It wasn’t long before a 3.5m crocodile cruised past to investigate. Eventually it moved away, perhaps realising I was too far from the cliff edge to trip and conveniently fall in the water.

The river mouth was a beautiful spot, but I didn’t linger. There wasn’t much shade, and the reflective rocks intensified the searing heat. I finished off the last of the baked barra and headed back across the salty rapids, before the tide completely submerged them. The crocodile watched my activity with interest as I made it safely to the opposite bank. A kilometre upstream I turned around to see its scaly head breaking the surface once again – it had been following me surreptitiously as I walked along the rocks.

The return journey upriver was uneventful, aside from two broken tent poles and a leak in one of my water containers. My gear was falling apart under the strain, but I was as happy as a water-logged adventurer could be. I had explored a pristine, unknown river in the remotest part of Australia’s greatest wilderness, and survived intact. In the end, the pure and spectacular River with No Name had produced a final score I could live with: Remote River Man – 1, big, hungry croc – 0.

Kevin Casey would like to thank Sea to Summit, Landwide Satellite Solutions, Macpac, Paddy Pallin and Heliworks (Mitchell Plateau) for their assistance in making this Remote River Man journey possible.

Remote River Man DVDs are available from the products page of Kevin Casey’s website at: www.remoteriverman.com