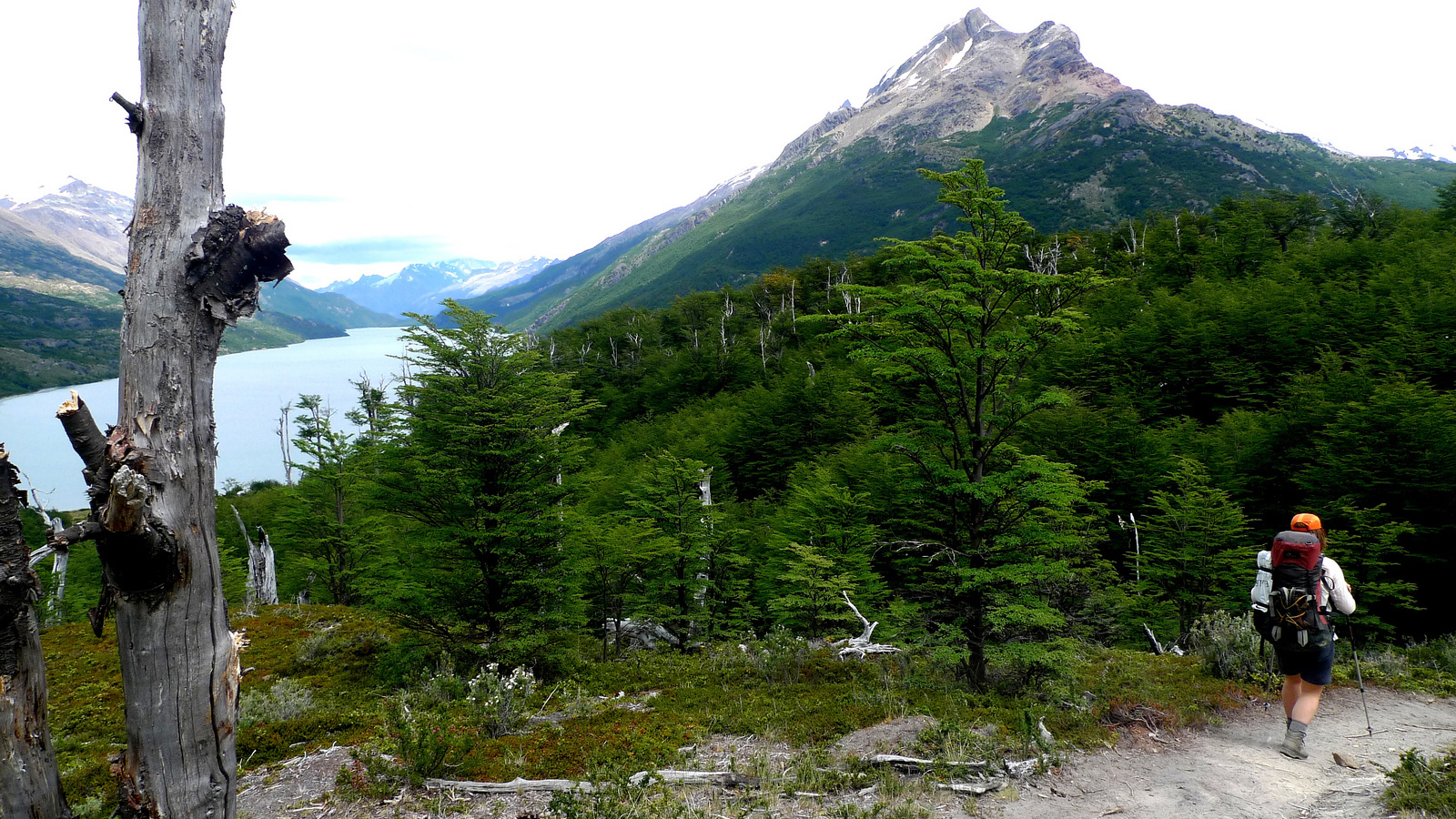 The ferry departed leaving us alone at the roadside. Puffed up clouds filled the sky and a cold breeze set an ominous tone for the beginning of our journey. Reluctantly we stripped to our underwear, clambered over the rocks and fell gracelessly into the sea.

The electrifying tingle of cold salt water rippled up my body and lifted my cheeks into a smile. This was the Pacific coast of Chile. Our next taste of seawater would come from the Argentinian Atlantic. We would get there on foot. Towelled down we extended our walking poles, shouldered our heavy packs and started walking.

It had taken three planes, four buses, one boat and a series of long waits for hitch-hikes over several days to get here. We were eager to begin. We talked excitedly about how good it felt for our progress to be once more determined by our own efforts and not by transport schedules or the good will of strangers. It was clear too that nerves underlay our excitement. We had a stiff marching schedule for the next 48 hours if we wanted to reach the next ferry on time: close to 100km.

Sunset came early on that first day and there was little doubt that we both would have kept walking if enthusiasm made the decision rather than daylight. A wide clearing presented itself and we pitched our tiny tent in the middle of it. The wind blew and the flysheet went taut.

It is hard to convey the joy to be found in the simplicity of cooking your own dinner on a fold-away stove, sheltered in the porch of a tent. It will not be as good as a restaurant meal and it will be not be as comfortable as eating at home but it will be better than both.

It is hard to convey the joy to be found in the simplicity of cooking your own dinner on a fold-away stove, sheltered in the porch of a tent. It will not be as good as a restaurant meal and it will be not be as comfortable as eating at home but it will be better than both.

The afternoon brought heat and we matched it with determination. It threw hills at us and we responded with a complete rendition of Bohemian Rhapsody. And finally it delivered beauty, an overhead condor circled to protect her young with an almighty hanging glacier as a backdrop.

As I sit now in my dressing gown, typing away at my computer, I am filled with nostalgia for the feel of a fresh sleeping bag and the yellow hue of our tent overhead. Night arrived slowly then morning. We slept, arose, packed and walked again.

The morning march was carried out in a silence reinforced by a lack of sugar in the blood later returned through the medium of porridge eaten in drizzle at the side of the road.

By midday the sun bore down with a vengeance as it would for weeks to come. Our track was dry and dusty, and the flies – oh, the flies! – were unrelenting in their quest for blood. Swiping, spinning, running, ducking, shouting. None of these things were off-putting to the horse fly. I saw their attacks as a challenge to my rationale. I would remain calm no matter how infuriating they became. But it was futile. Flies are bastards.

’How dare you? HOW DARE YOU!?’, Laura roared at a particularly impertinent specimen.

I, meanwhile, developed my own technique for defence: slowly approaching the enemy with a hand, maintaining a distance of a few centimetres, calmly taking aim and then FLICK! The invader would be sent scurrying. Usually without return.

We sought shelter beneath a bridge. Two cyclists we’d encountered on the other side of fjord the day before sped past overhead. We broke bread, ate cheese and picked salami gristle from our teeth.

The afternoon brought heat and we matched it with determination. It threw hills at us and we responded with a complete rendition of Bohemian Rhapsody. And finally it delivered beauty, an overhead condor circled to protect her young with an almighty hanging glacier as a backdrop.

Evening came with a weariness compounded by the additional five kilograms of water we carried in preparation for the night’s camp. We collapsed within a yard of the road, picking a corner exposed to the wind so as to minimise mosquito attacks. Before pitching the tent we let ourselves slip into the neighbouring lake and have its cool waters ease our sorrows. Could we do this again tomorrow? 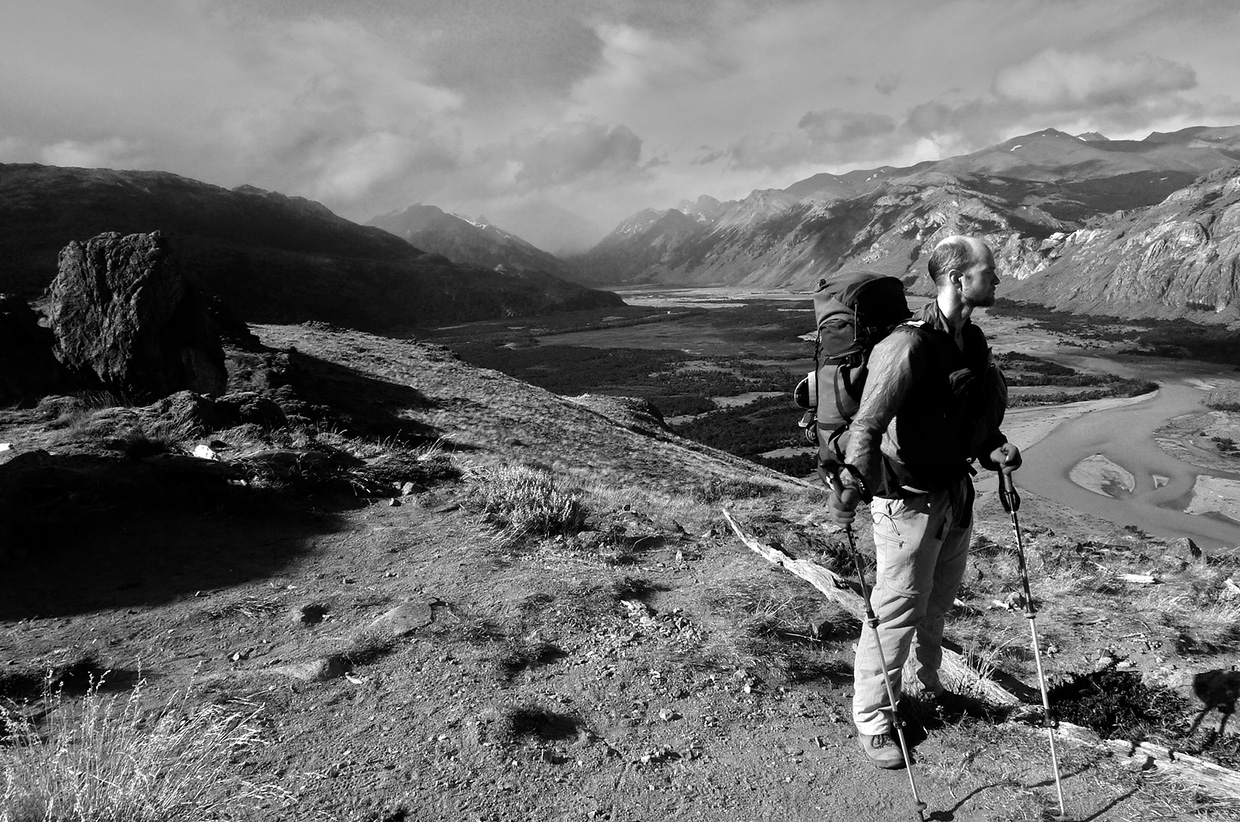 The second day was a hardship unlike many others I have experienced. The sun returned with its army of blood sucking insects. There was no respite. These were a foe without respect and they tipped me to breaking point. At breakfast I flew off in a silent rage, eating my porridge whilst power walking to outrun them. The burden of our laden packs bore down through our shoulders onto every step, dragging us backwards like a kind of horizontal gravity. Progress was painstaking.

Some mirth was provided with delightful irony as I dropped our hand-cleaning alcohol gel into my own turd and spent some time painstakingly wiping it clean but before long we were back beating against the current in the direction of the next village.

I would be lying if I said I could remember how hard it was but I don’t. All I remember is sitting in shade, listlessly gulping water, standing up to walk and getting no further than half a mile before my energy was sapped and I found myself in a sitting position once more, unable to make any further forward movement. How could it be so difficult after just two days?

A coach rattled past leaving a plume of dust. Our supply of water ran lower and our throats grew parched. The sun dropped slowly towards the horizon as night time approached and we still hadn’t reached our destination. I was weary and ready for rest. We shared a chocolate bar in silence and plodded onward to the sound of barking dogs.

In darkness now we descended a steep hill and the glow of civilisation appeared in the distance. We were less than half a kilometre away when a jeep pulled alongside.

’I saw you guys get off the ferry the other day. People don’t normally walk that road. Do you want a lift into town?’. Yes.

In January this year, husband and wife Tim and Laura Moss travelled to Patagonia to walk across the narrow bit of South America. This story comes from the first two day’s walking on the Carretera Austral. They continued for two and a half weeks before aborting two-thirds of the way across when a food package failed to arrive.

Tim has organised expeditions to all seven continents, made first and first-British ascents of several mountains from Russia to Bolivia, and has travelled around the world using eighty methods of transport, a trip for which he won the Year Of The Volunteer ‘Award for Innovation’. He is a Fellow of the Royal Geographical Society and a current Guinness World Record Holder.

Tim runs The Next Challenge, a website aimed at getting people to live more adventurously.

My Unconventional Playground The Wrath of Broken Things 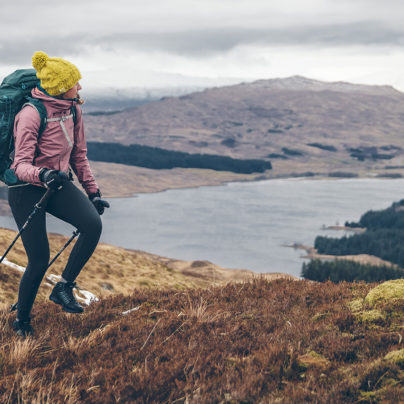 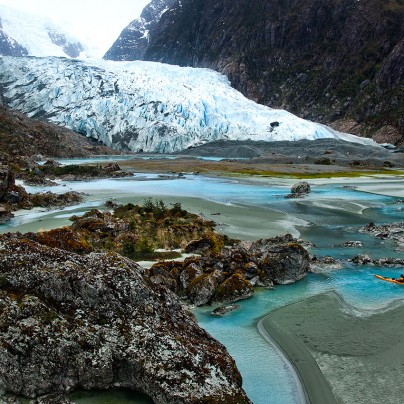 Paddle and Portage in Patagonia Will Copestake 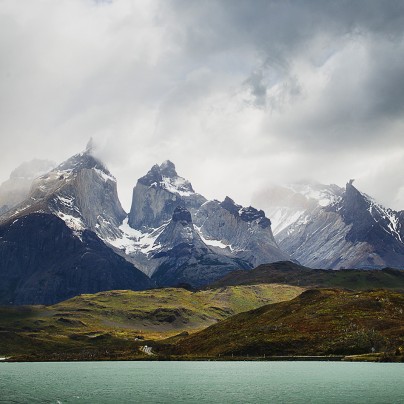