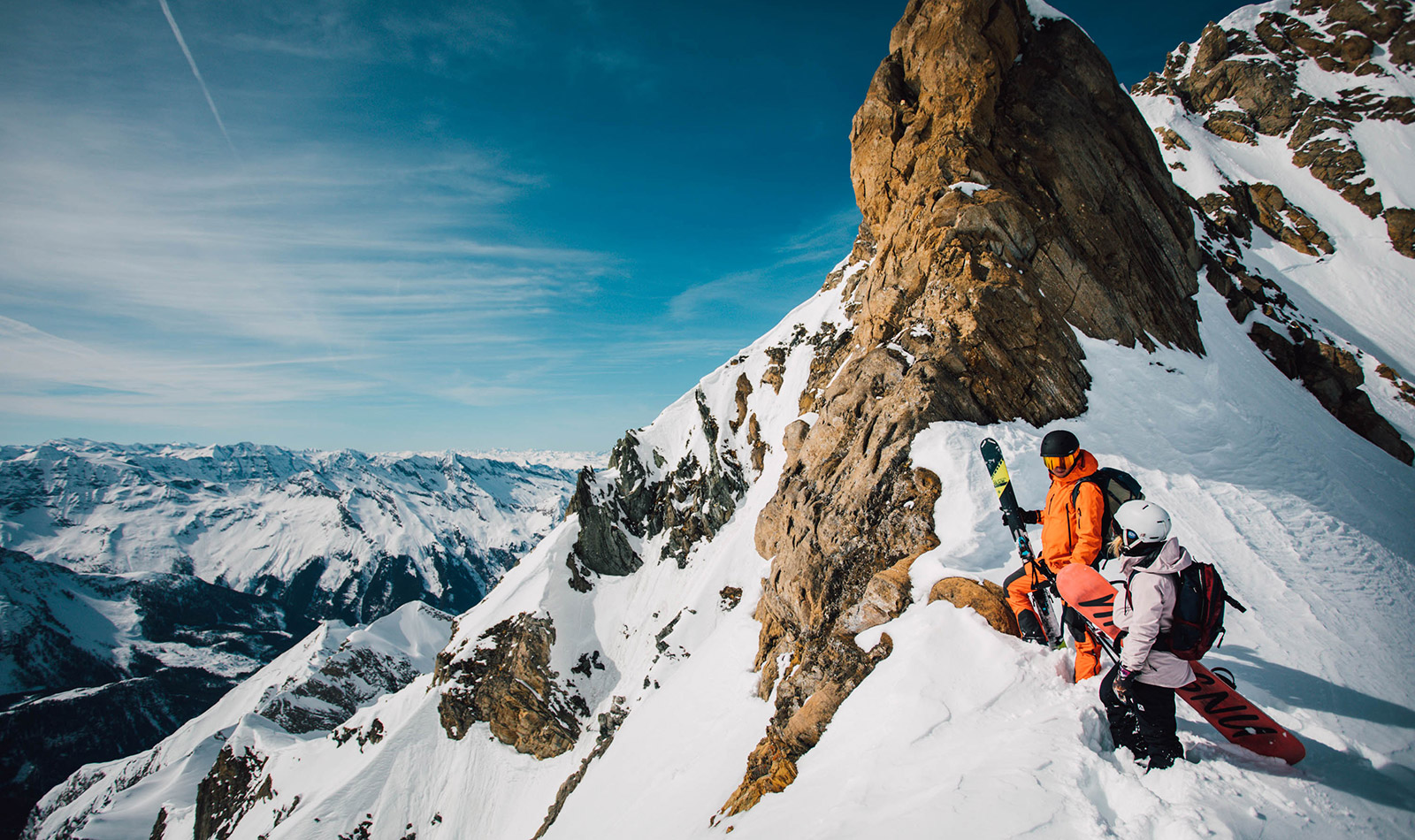 Produced in Partnership with SalzburgerLand

‘I was standing at the top of the lift. Below me was the huge turquoise-blue lake surrounded by huge mountains – the 3,000m peaks of Austria. It was just stunning!’ Gee Milner, skier and filmmaker for Sidetracked spent a few days on the slopes around Zell am See-Kaprun.

The ruggedly beautiful landscapes of Austria, Zell am See, and neighbouring Kaprun take some beating. It is geography and geology, of course, that conspire to make Zell am See-Kaprun such a brilliant place to explore via skis or boards. ‘And the ski lift comes straight out the middle of the town. It’s an incredible place to ski,’ Gee says.

In summer, the lower slopes are painted with wildflowers poking through the Alpine pastures, but in winter there’s an excellent network of lifts on the slopes of Zell am See-Kaprun and due to the ticket alliance “Ski ALPIN CARD” of Skicircus Saalbach Hinterglemm Leogang Fieberbrunn, Schmittenhöhe in Zell am See and Kitzsteinhorn Kaprun in Winter 19/20 there are 408km of pistes available. From the summit of the nearly 2,000km Schmittenhöhe, more than 30 of the giant 3,000m peaks can be seen. Many come to ski the Kitzsteinhorn, the only glacier ski region in the Salzburg area and one that can be skied, weather willing, from October to early summer.

Our team from Sidetracked, Gee Milner and photographer Clement Hodgkinson, arrived late in the season, but to some incredible powder. ‘We took a short hike up above one of the chairlifts, and it was super scenic. You look across all the highest peaks in Austria, it’s an insane panorama, and you can see right down into the valley. It was incredible, a beautiful day, and we only needed to take a small hike to get to some fresh snow. We traversed in, carved some turns together, gradually making our way down the mountain. Eventually we arrived at the lift, and did it all again – and again.’ 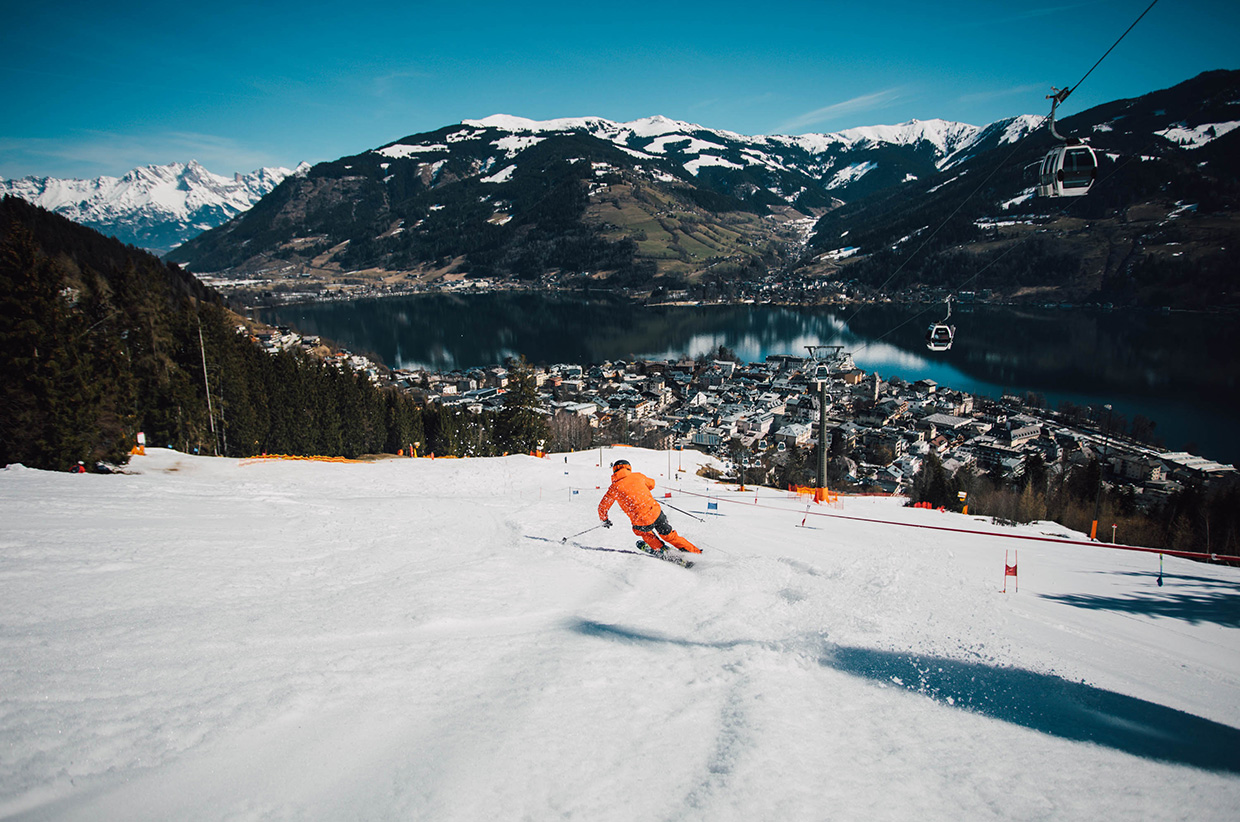 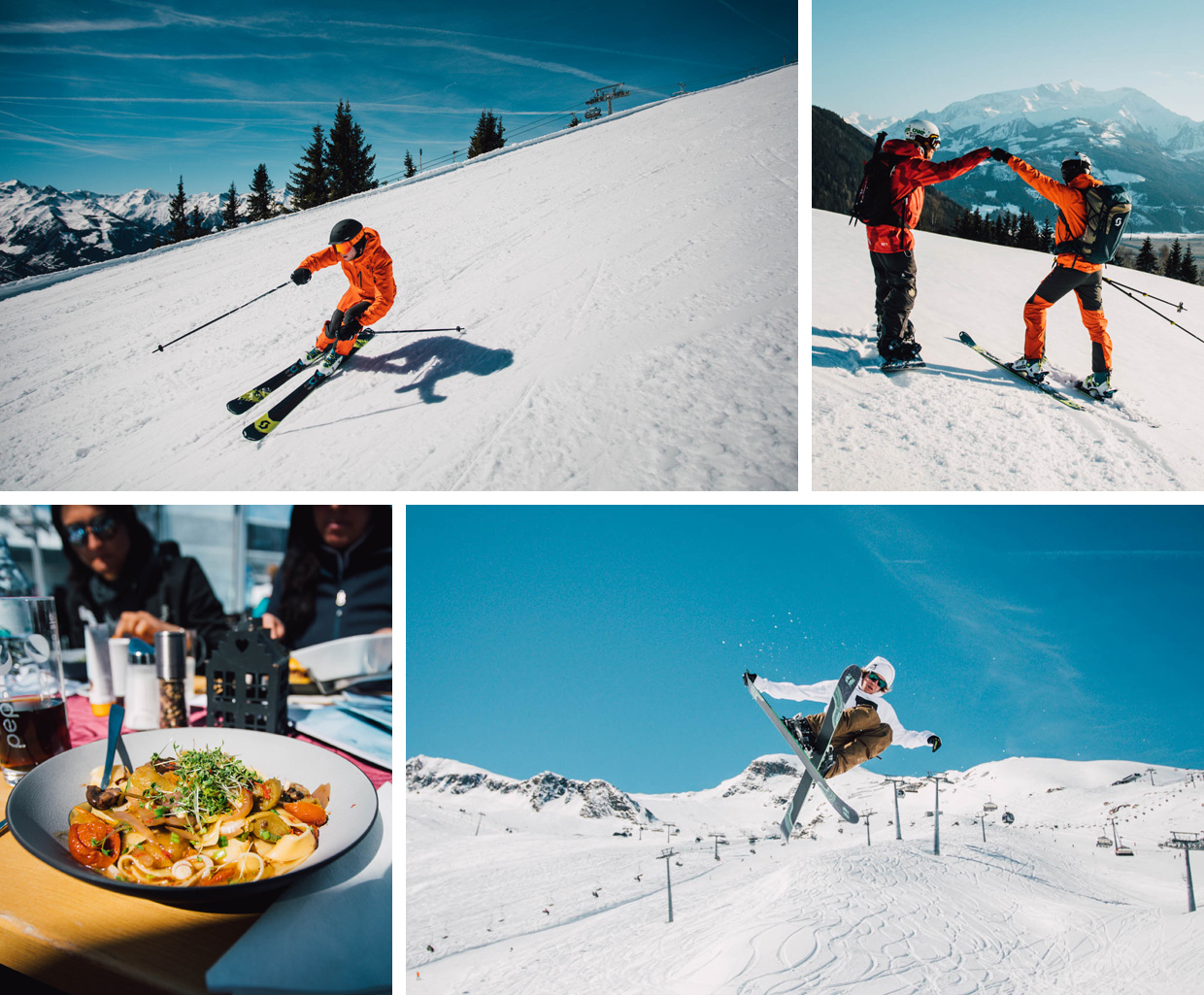 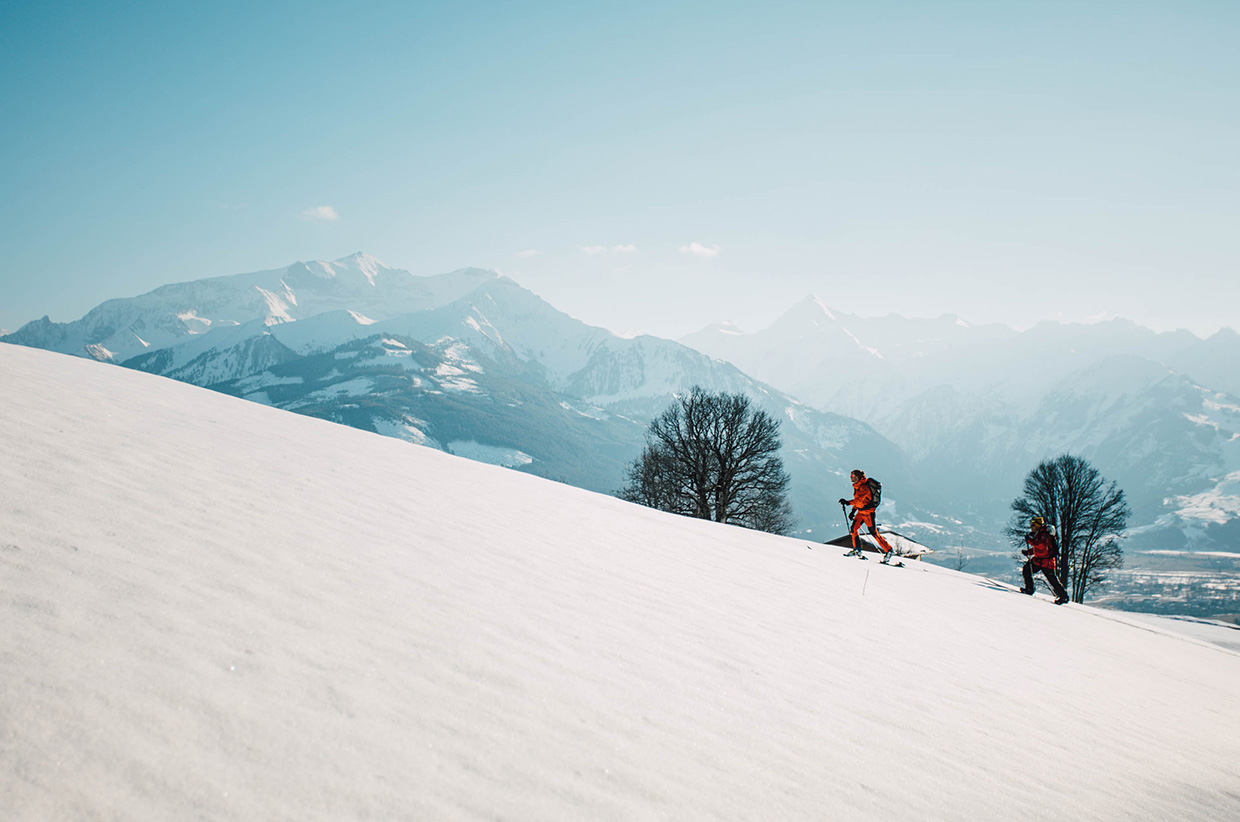 The next day, Gee and Clement visited the neighbouring town of Kaprun. The view from the town is dominated by the Kitzsteinhorn, accessed from Kaprun. Lifts run up to Gipfelwelt, less than 200m shy of the summit, and the skiing below is dominated by the namesake glacier. Kitzsteinhorn has attracted skiers since the dawn of the sport. The first hut opened on the mountain in 1909 and the first cable car in 1965, making it the first glacier ski slope in Austria.

‘This is the best place for freeriding,’ Gee says. ‘You have these vast, wide slopes giving you loads of great options for getting off-piste, plus you can ski above 2,000m up to 3,000 m so the conditions are always superb. It’s amazing.

‘But perhaps the best thing is the freeride accessibility of the resort. We went up to the ridgeline and saw the next valleys as well. There’s great variety for those starting out in freeriding through to some far more challenging options for the experienced rider.’

Starting from the upcoming winter season there are an incredible 408km of slopes to explore thanks to the ticket alliance Ski ALPIN CARD. These are accessed by 121 cable car and lift systems, including a funicular railway. Zell am See-Kaprun is an area known for its wide and well-groomed pistes, and as a backup, if the weather won’t play, snow-making machines will ensure slopes stay open. They’re always in tip-top condition every time you get onto the slopes. Thanks to the Kitzsteinhorn glacier, there is always snow guarantee and the season also runs later here, as well as offering a new experience for visiting skiers. Across the two towns, there are 10 ski, carving, snowboard, and cross-country skiing schools and plenty of hire shops.

The skiing areas are in three zones:

Schmittenhöhe ski region (Zell am See). The lifts operate from the end of November to mid-April. There are 77km of slopes between 757 and 2,000m.

Maiskogel and Lechnerberg family ski region (Kaprun). This beginner and family-friendly region is open from early December to mid-April. There are 20km of slopes between 800 and 1,750m.

The ‘K-onnection’ project will see two new cable cars from Kaprun, over the Maiskogel directly to the glacier on the Kitzsteinhorn. The new 3K Kaprun-Kitzsteinhorn-Konnection, the first tri-cable gondola lift in the Salzburg region, will start operating from the Maiskogel to the Kitzsteinhorn on November 30th 2019. It will then be possible to reach the mountain station on the Kitzsteinhorn (TOP OF SALZBURG, elev. 3029m) directly from the town centre of Kaprun (768m) via the Maiskogel. This 12 km scenic ride will not only be the longest continuous gondola axis, it will also rise the greatest elevation (2261 vertical meters) in the Eastern Alps.

With the zellamseeXpress starts the connection of the Schmittenhöhebahn with the Glemm valley. The new cable car opens on 7th of December 2019 and enables an entrance to the Schmittenhöhe from the Glemm valley for the first time. From the new modern station you are just a few bus stops away from entering the slopes of Skicircus Saalbach Hinterglemm Leogang Fieberbrunn. You can get back again to the zellamseeXpress via the fantastic number 168 natural snow slope. 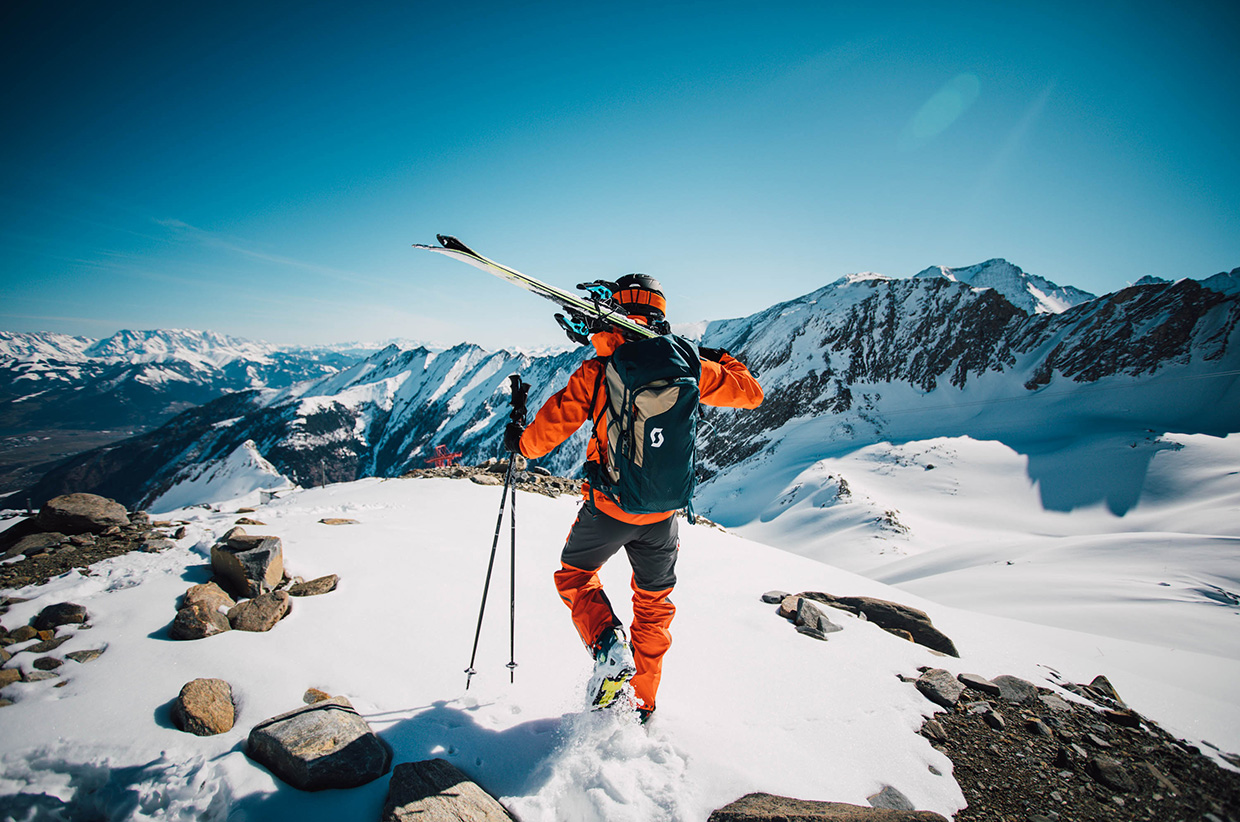 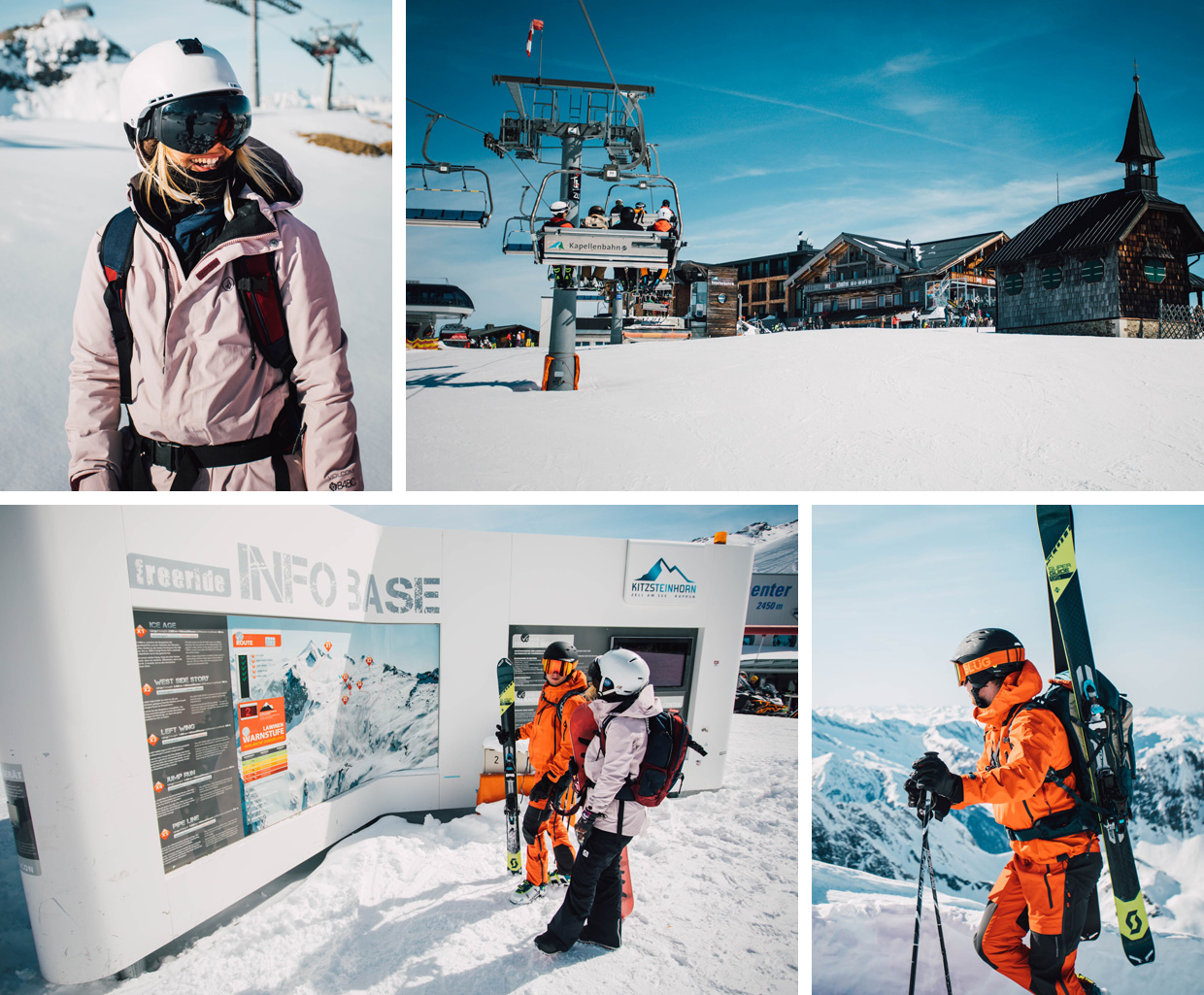 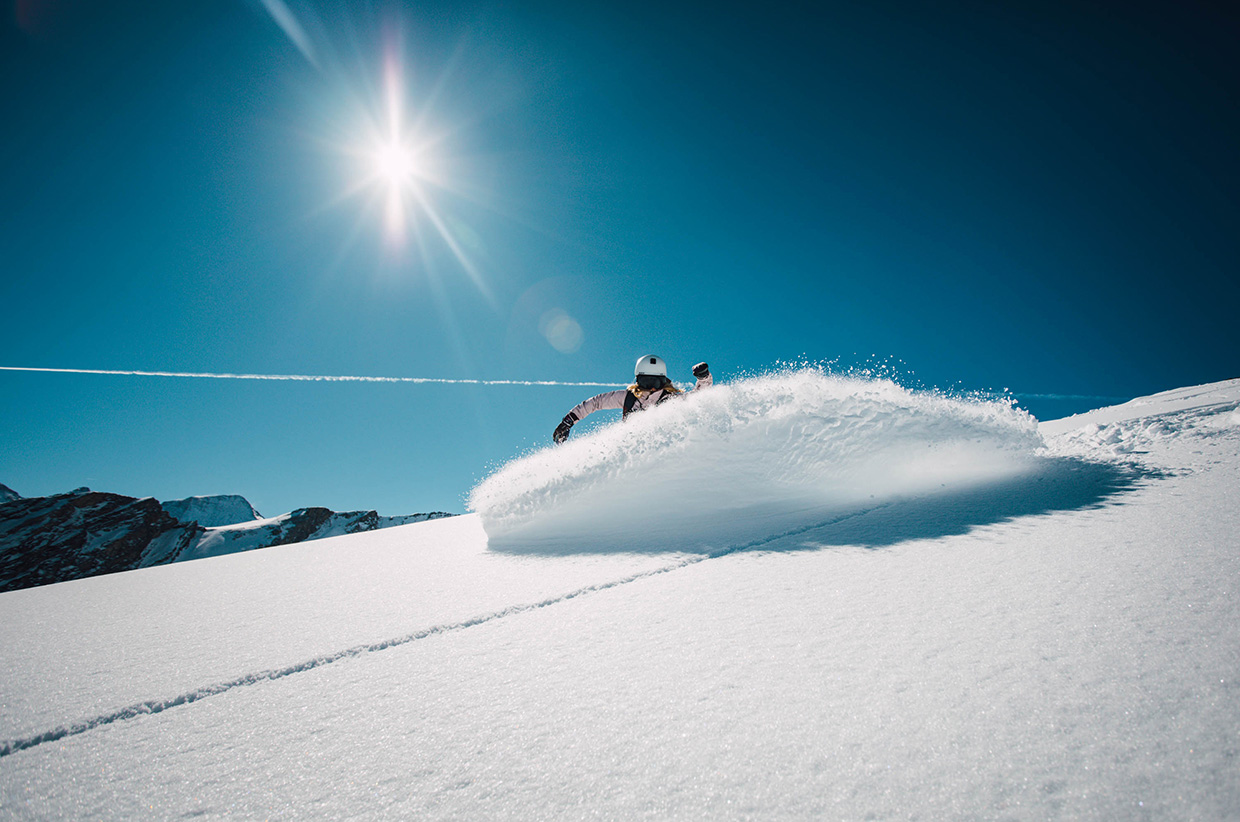 New for the 2019/20 ski season is the Ski ALPIN CARD, which allows visitors to enjoy Skicircus Saalbach Hinterglemm Leogang Fieberbrunn, Schmittenhöhe in Zell am See and Kitzsteinhorn Kaprun, forming one of the largest and most diverse ski areas in Austria. It opens up 408km of slopes and 121 lifts. For more information, visit alpincard.at.

There are five freeride runs across the Kitzsteinhorn Glacier Ski Resort: Ice Age, Westside Story, Left Wing, Jump Run, and Pipe Line, all with 100 per cent snow reliability, thanks to the resort’s altitude of 3,000m. Experienced skiers will find powder lines, cliff jumps and pipes around the Kitzsteinhorn. The Freeride XXL signposting system provides information about skiing the glacier, while the Freeride Info Base has up-to-date information about the routes, weather, snow conditions, and avalanche warning levels. Topographic maps help to gauge steepness and identify the danger spots so you can plan the best lines.

Snowboarders and skiers aged 13 and over interested in freeriding the glacier can join FREERIDE Monday on the Kitzsteinhorn glacier. Safety equipment can be hired. There are also ski guides who offer visits to some of the best ‘secret’ spots on the mountain.

STAYING AT ZELL AM SEE-KAPRUN

There are around 900 hotels and guest houses for visitors across Zell am See-Kaprun, from cosy family hotels to five-star luxury residences. Along with the great selection of hotels, you’ll also find more than 90 restaurants, including four that have been awarded Gault Millau toques. Fans of après-ski will enjoy the selection of bars, including outdoor bars.

The events schedule is active all year round – including a free SnowNight in Kaprun and Zell am See every Monday and Wednesday, where you can watch professionals perform stunts and tricks. You’ll also find professional events held throughout the winter like the Winter Spartan Race or the GP Ice Race.