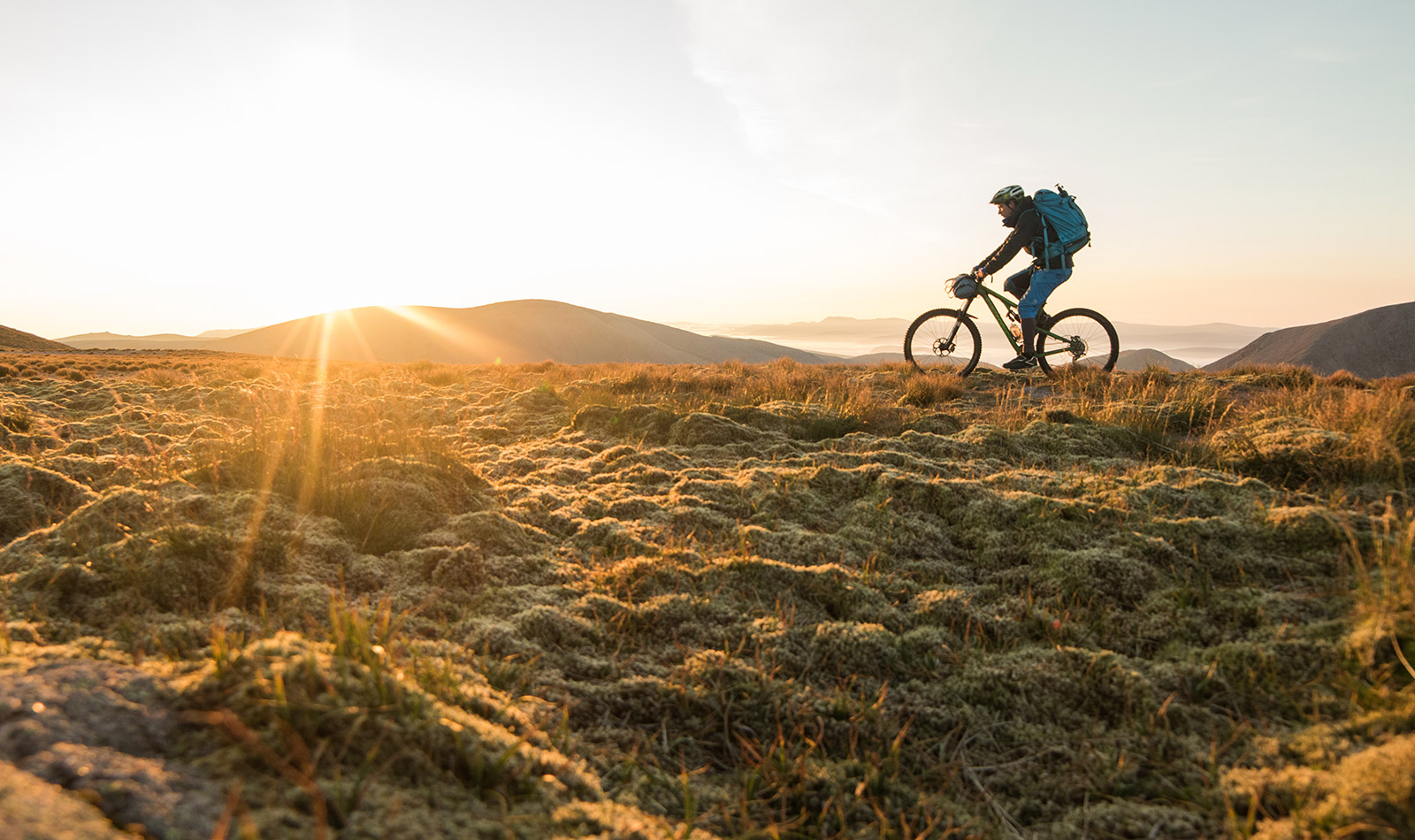 I live in a land of contradictions. Scotland is fiercely independent, but not quite willing to go it alone; it is tiny, but home to a landscape and culture that speak far beyond its borders. In summer I tramp up and down hills, but in winter I stand with trepidation at the feet of mountains. Although we frequently look south from here as the sun withdraws and the seasons turn, we lose our grip on the land and it looks northwards to the cold, the wind and the silence of winter skies.

Those of us with adventure on our minds have a tendency to look outwards, to wider expanses in emptier corners of the map, but we forget what we might find right here at home. On a very few nights in Scotland a lucky watcher might see one of our fleeting northern visitors, the aurora borealis, and nowhere could be better to do so than the whaleback granite domes of the Cairngorm mountains. To go in hunt of the Scottish aurora, Ronan and I planned a mountain bike ride with a difference: simply to stay as high as possible, for as long as possible, and not to forget to look up.

Climbing the ski road, we break free from the clinging damp to pure white sunlight and a sky that belongs firmly to the sun for now. We aren’t alone – other people have climbed out of the mist that laps at the mountain’s feet, and they stand around us, blinking and grinning. If you could put the world through the washing machine and hang it out in the sun, it might have the same clarity and fresh feeling of promise. The buzz of anticipation is infectious as other people set off on their own adventures. On the climb we overtake some fellow travellers: stunted pines that are making a slower march back up these slopes to reinstate the natural tree line, seeking their own space.

Instead of a steep slope to mirror the one we just sweated up, the summit is a gate through which we emerge into the bit no one tells you about in the brochure. Green meadows sit in their own hidden valley beside the clear water of Feith Buidhe as it meanders towards the edge of the plateau, where masses of old snow still lurk beneath shaded crags, dripping into the moss. The local herd of reindeer has retreated up here to escape the late summer heat, only adding to the feeling that we’ve stumbled into the geographical equivalent of a forgotten store-room full of treasures. The animals are a lovely sight, but they can be nuisances: in snowy conditions they eat anything green poking above the snow, especially the slow-growing pine saplings. Life here is fragile and precarious. A carelessly locked back wheel can destroy years of growth for the tiny dwarf juniper and birch, just as easily as a hungry reindeer.

Those of us with adventure on our minds have a tendency to look outwards, to wider expanses in emptier corners of the map, but we forget what we might find right here at home. 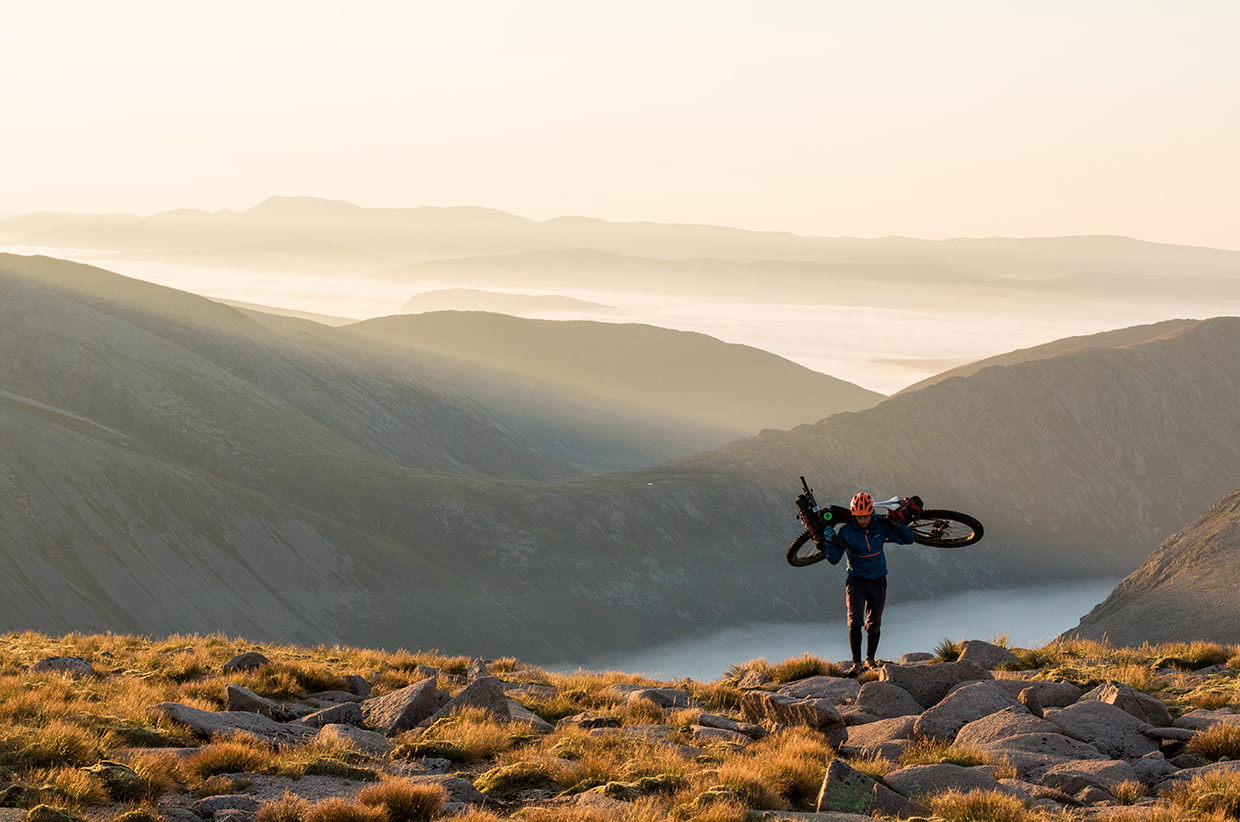 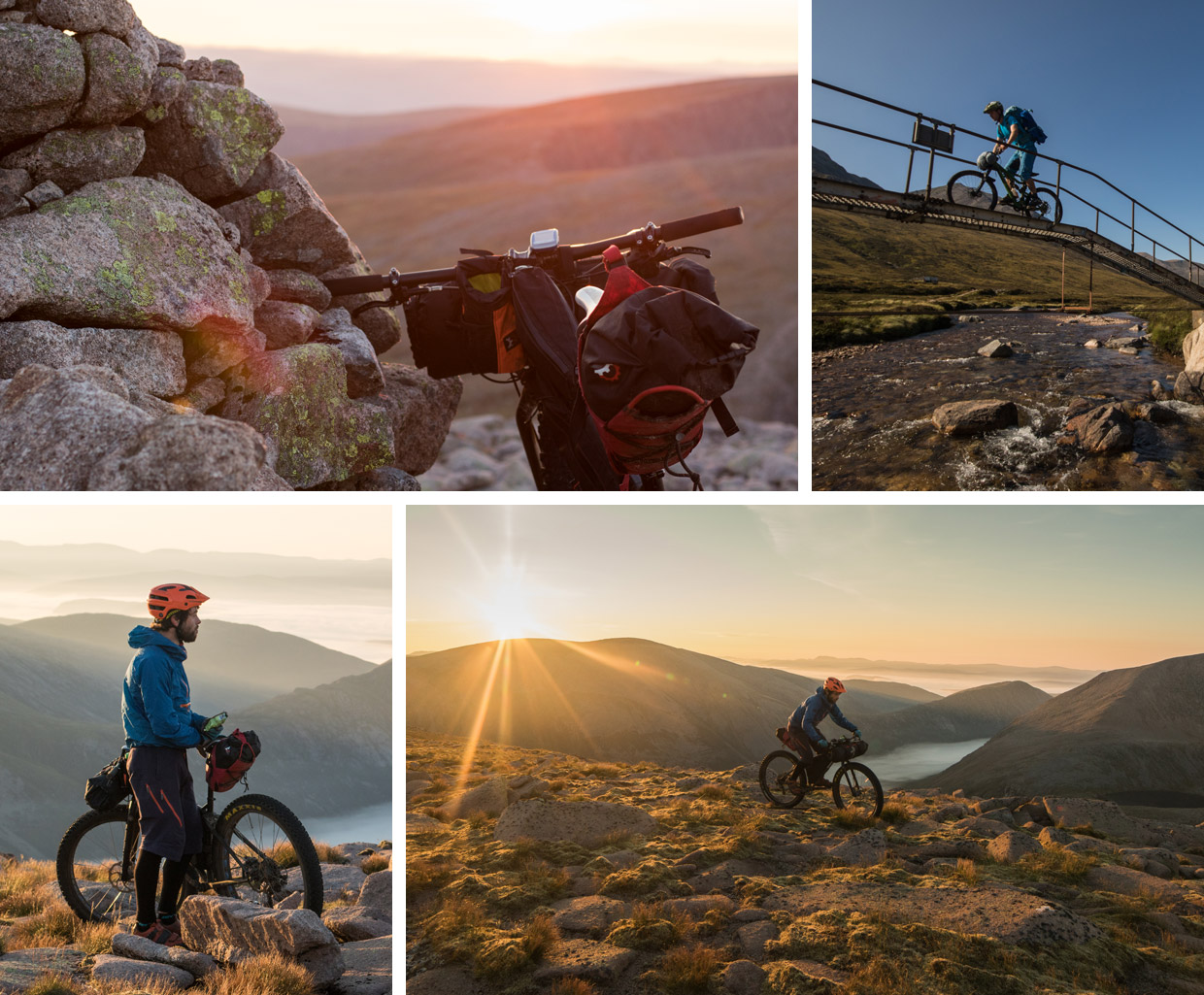 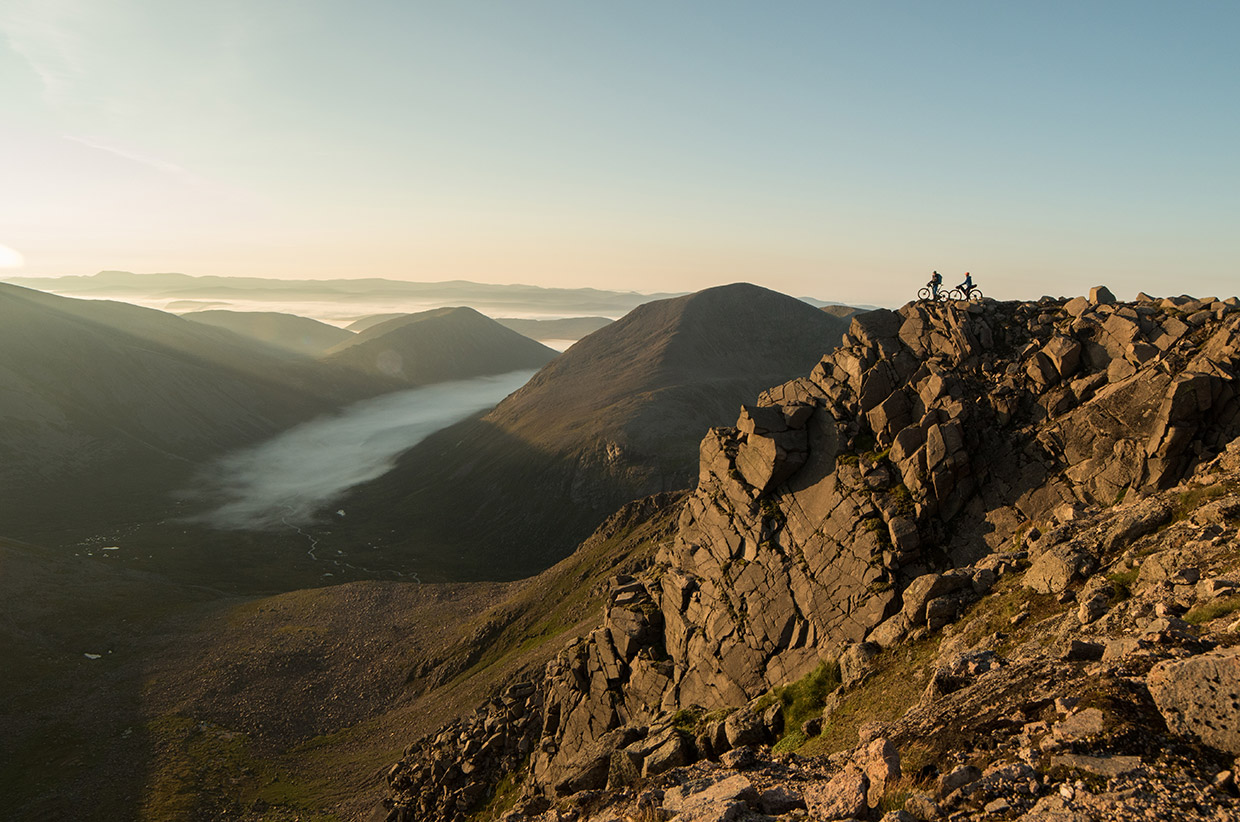 Each step burns with the pain of unfamiliarity, our chatter stutters and fades as our heads drop to the task, and we count the metres, one by one, until at last the skyline of the coire rim becomes just another footfall.

Aviemore, now free from the mist, sparkles below us among the reflections from the many lochs and rivers. We turn our backs on the buildings and roads and people, and listen to the voice that says it’s too crowded here: go further, and higher, and find space. We thread a sandy trail through the meadow, towards emptier places and sweeter air. The greenery and the river are the starting point for a new climb onto the barren and boulder-filled back of Ben MacDui. It isn’t long before we’re standing on the roof of the Cairngorms, at 1,309m above sea level, and nothing remains above us but the burning sun in an azure halo. Perhaps that isn’t impressive if you scale it against the Alps, Rockies or Andes, but we can see more hills in every direction than either of us can name, and it is good, and we are here.

Our planned camp spot for the night is at a similar altitude, but with the unfortunate problem of being on the other side of the Lairig Ghru. This deep trench contains the infant River Dee, striking through the heart of the hills, and for us means a descent of 600m, followed by an immediate climb out the other side. The descent itself takes some time, bouncing and laughing our way down improbable rocky lines – sometimes the Velcro-like granite beckons, but caution is our friend when help is far away, and pride ends up suffering so that our bones don’t. The local residents are out in force – ptarmigan waddle about among the boulders and wait for winter to return, while the dotterel are beginning to think of packing their bags to flee south from the advancing cold.

It’s going to hurt, but the need to be back up on the plateau at sunset shouts louder than tired legs and arms. I’ve never actually carried a fully loaded bike on my back before, and quickly realise this is for good reason. Each step burns with the pain of unfamiliarity, our chatter stutters and fades as our heads drop to the task, and we count the metres, one by one, until at last the skyline of the coire rim becomes just another footfall. The sun is slipping away, but we press harder, racing to catch it before the curtain of night is pulled over us. As we reach the blocky summit of Cairn Toul we admit defeat: for the second time that day we simply stand watching the spread of land beneath us as the shadows ooze gently into the glens from the east.

Stove out, kettle on, brew’s up – a tea break seems appropriate, but staying still doesn’t seem to fit this place, and soon we move again, tracking north across the roofspace of the hills towards Braeriach. It’s a huge mountain – not so much a lone summit as a separate tract of land, elevated and isolated from everything else around it. There are head torches in our packs but that’s where they stay. The last dregs of the daylight lead us on. We chatter constantly, buoyed up on the adventure and the knowledge that we alone are here to see this place tonight. The stage remains the same, but someone has set a different backdrop behind it: stars begin to pop out of the gloam, and below us the lights have been lit in Kingussie and Aviemore. 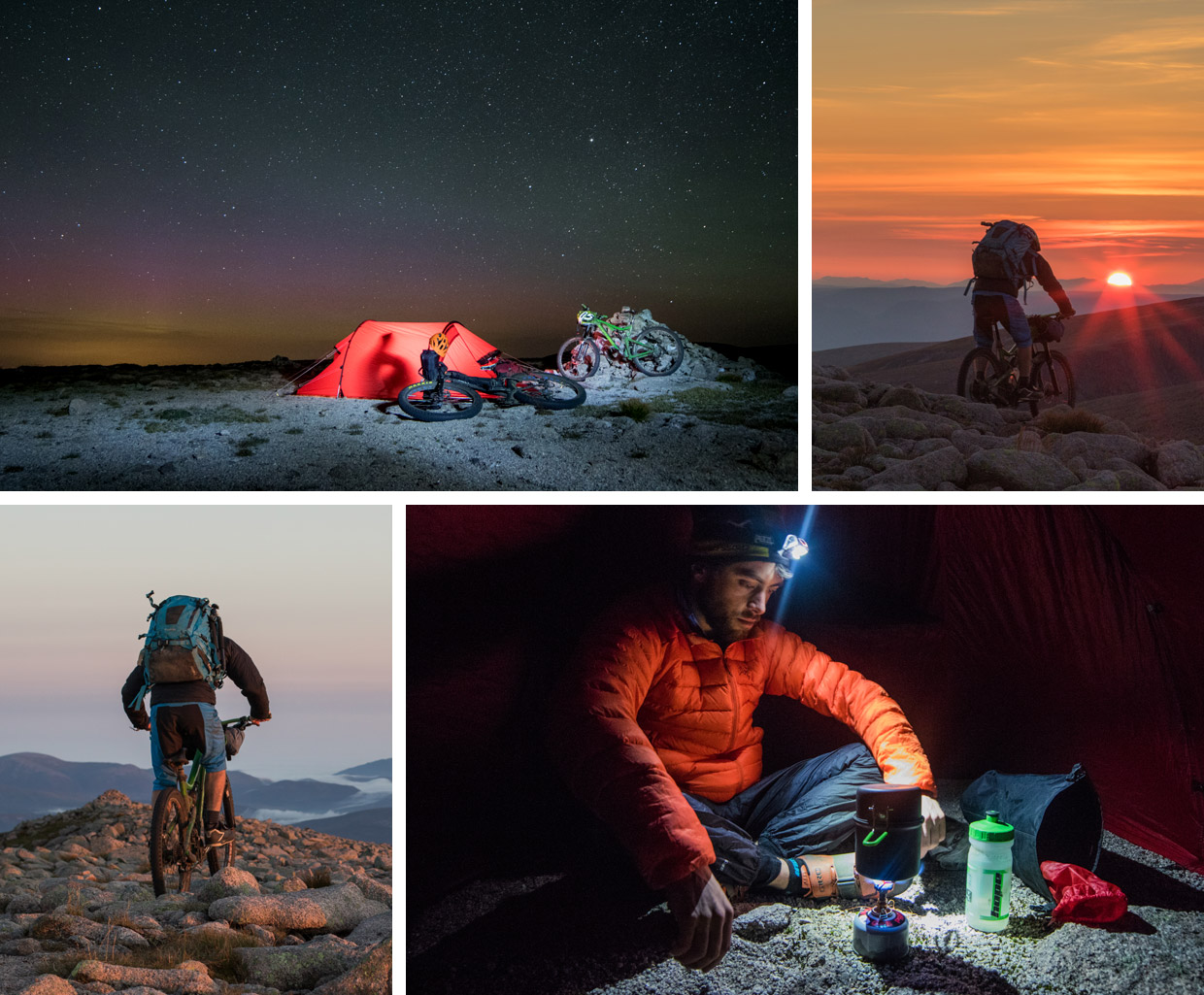 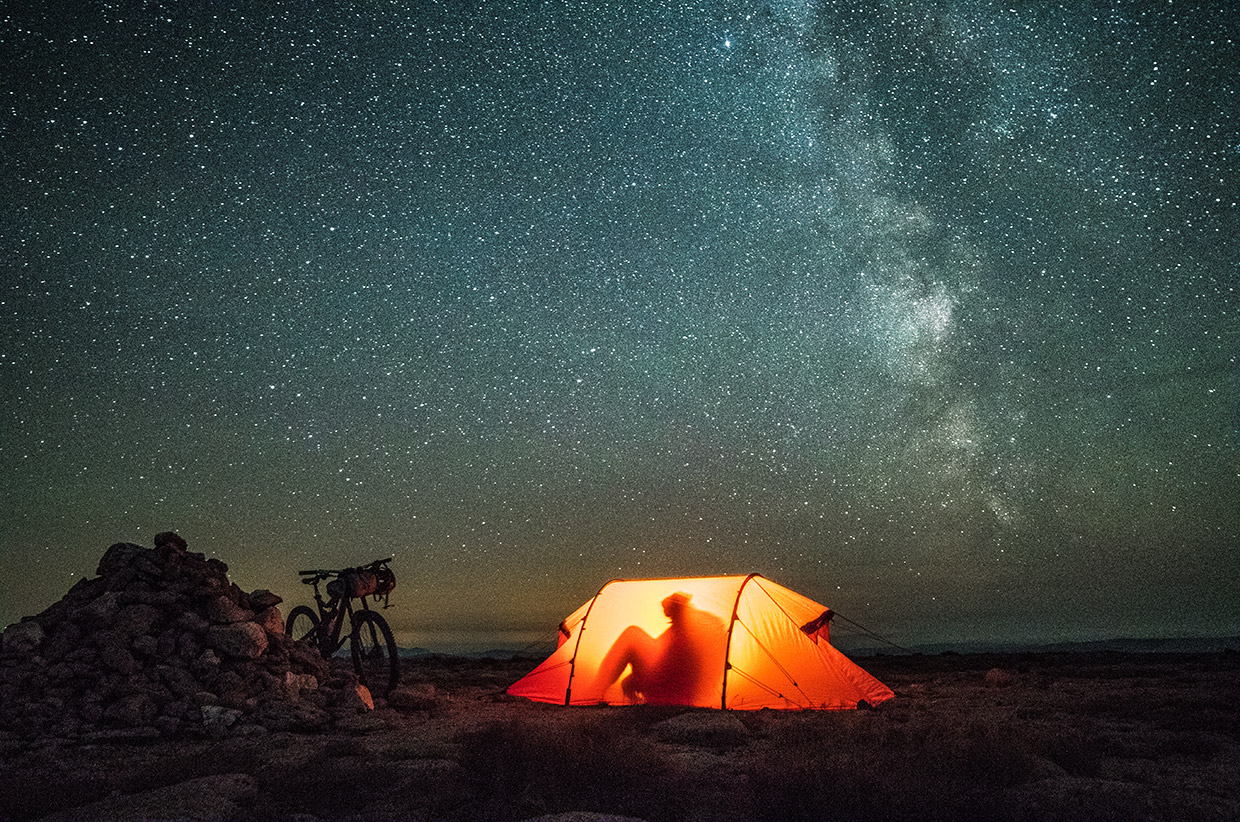 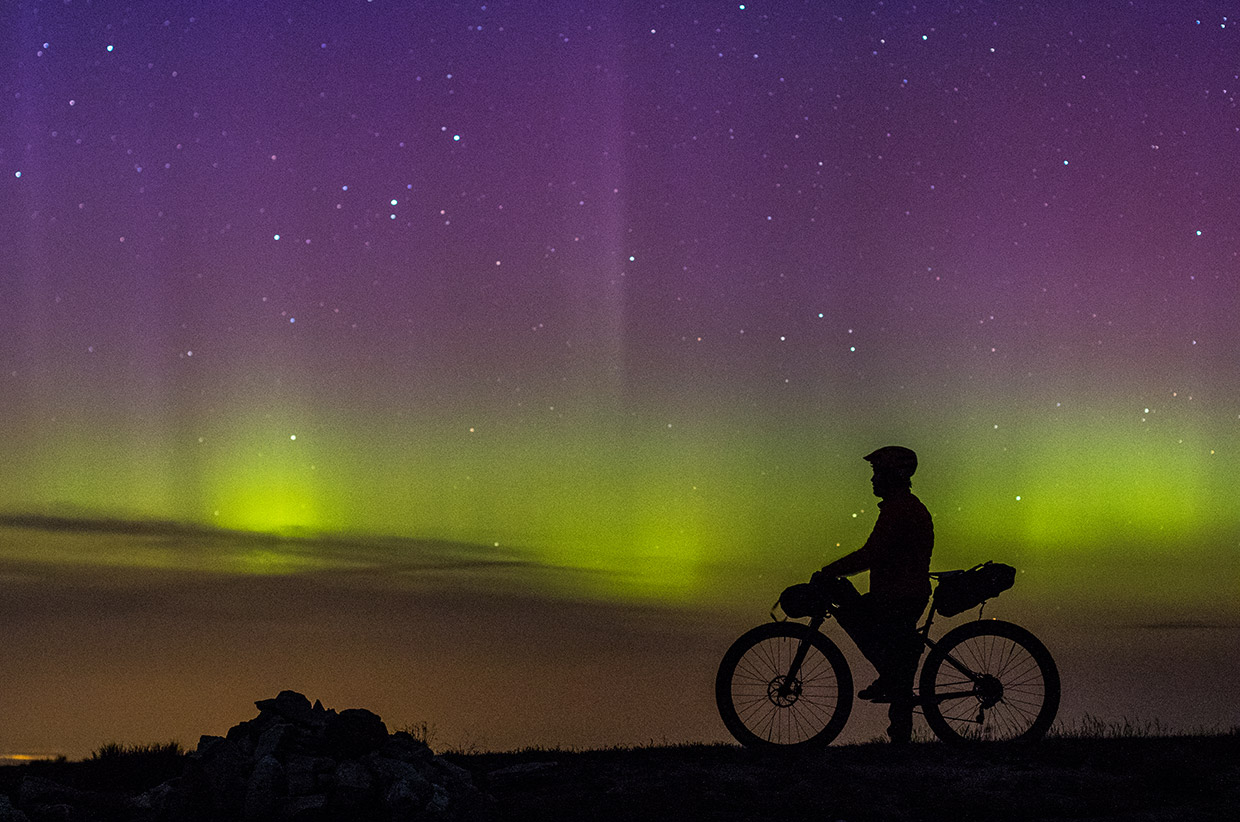 Low light stops play by half past ten. We accept that we can barely see each other any more, let alone the crags waiting to swallow us. The kettle goes on once more, and the lightweight tent outer goes up to keep off the now icy breeze. Sipping hot chocolate and filling my empty belly, I look upwards and feel myself going a bit Ferris Bueller: you know, the scene with Cameron staring at the painting. Ronan can’t sleep either; he’s too excited taking photos of the night sky, running around like a child at Christmas. I lie back and search the stars overhead, trying to understand the distances involved and failing. Just as I give up and begin to think of sleep, the aurora flares into life on the northern skyline, breathing green and purple fire over the forests, below and above us all at once. The world freezes as we watch the play of light and colour flow into the sky. No words are spoken – how could they fill this space? The hills shrink into insignificance as we look upwards to the cold and deafening silence of the sky.

Sleep does finally come to our mattress of moss, but I wake early with the chill wind still lapping over my face. In the pre-dawn light the sights of the previous night seem to belong to somewhere entirely different, but they’re hard to shake off as we loosen stiff limbs and pack up, eager to move again. Above us now is just the pale, watercolour blue of another day, stained with the first rays of sunlight. Below us there is nothing but white fog – the glens have been submerged and we float on our mountain island above the cloud inversion.

Following the faint path along the ridge, we watch the sun catch us up once more and set fire to the scene. Another summit, another moment to stop, watch, listen and be very, very glad that we are here. No man is an island, though, and it’s nearly time for us to rejoin the rest of the world. Soon winter will take back the high places, and we will content ourselves with riding in the valley until next year (well, mostly…). We take one last look at the silent space and empty sky behind us, take a breath, and plunge head-first away from the light into the darkness, down into the fog.

Huw Oliver is a mountain bike guide and writer based in the Scottish Highlands. He’ll try anything as long as there’s pedalling involved, is powered by peanut butter and is kept awake by all those trails that nobody has ridden yet.

Ronan Dugan has a passion for wildlife and wild places. He is an accomplished photographer and has traveled extensively and is now making a career out of his love for photography and the great outdoors. 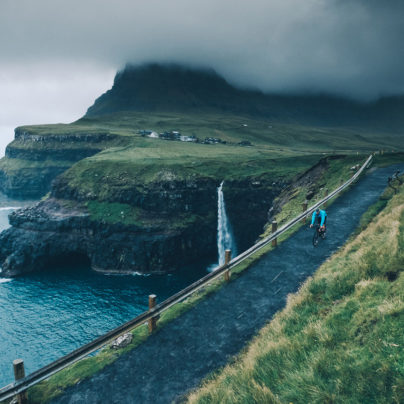 The Draw of the Faroes Chris McClean