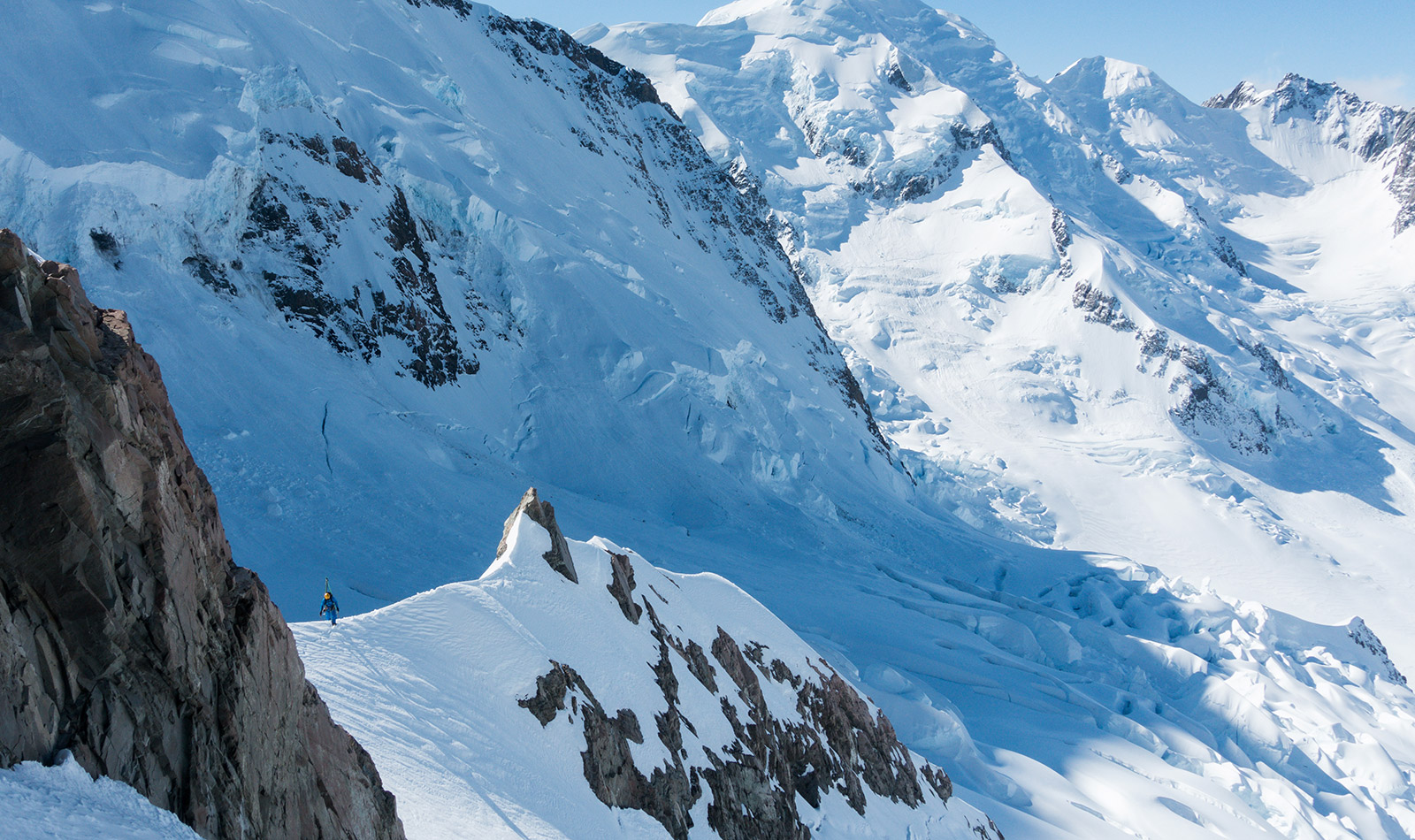 A Line In A Photograph

Kiwiland, or ‘Skiwiland’ as New Zealand’s Southern Alps quickly became known, is home to big wild mountains, snowy ridges and elegant ice arêtes, so it’s no wonder that native Edmund Hillary was the right man to ‘conquer’ Everest with Sherpa Tenzing Norgay. Rapidly changing weather and depressions bring incessant gusty wind, and the southwesterly storms roll in heavily laden with moisture falling as snow over the high ground. There is nothing but ocean between the South Island and Antarctica and the snowfall amounts to nearly three times what the Northern Alps might receive.

The mountains themselves are badass, with a plethora of faces bigger than 800m and all the ski features you could possibly hope for: spines, ridges, faces, hanging glaciers and couloirs. The range is split east and west by the main divide formed by a chain of impressive peaks that include Cook and Tasman. Here, the best way to utilise your time is to spend your money on a ride in a ski plane, or helicopter in to the huts and avoid travelling on unstable moraines at all cost.

New Zealand has such a unique, spectacular, rugged and colourful landscape: once you learn to take advantage of the weather windows you’ll check yourself in wonder of how such a place was created. This is how Tom Grant and myself spent 3 weeks exploring the Aoraki/Mt Cook range discovering that New Zealand has some incredible adventures on offer. A few weeks prior to departure an Instagram photograph of Elie de Beaumont’s west face revealed a line that instantly caught my attention.

The line is complex. Burly yet elegant, isolated and unskied. Local opinion was that the line was a rock slab with several overlaps that wouldn’t be skiable. I live with the north face of the Alguille du Midi in my backyard, and spending a lot of time on that type of terrain changes your perspective on what’s possible. Although discouraging, the local opinion didn’t put me off the idea completely. The difficulties were not limited to the skiing but also the logistics of getting back from the bottom of the face. Our experience of the howling wind induced too much fear at the thought of setting ourselves up in a tent, so that option was quickly dismissed.

Without a convenient hut to use either, we came up with a plan to traverse the mountain, ski the face on sight, and then find a way back over the divide. Altogether there were a number of unknowns that we would have to solve en route. Firstly, without the luxury of climbing or even seeing the face, we would just have to deal with what we found. Our second big unknown was the state of the glaciers below the face for re-crossing the divide, and whether they would offer an easy passage or leave us stranded in a crevasse maze. On reflection this seemed an implausible plan with low chance of success, but every chance of becoming a prolonged epic due to one of the unknown factors baring its teeth. Quite a daunting thought when you are used to planning every last detail, but the line in the photo had been enough to motivate us to fly halfway round the world to attempt this and we were committed to seeing it through.

The mountains have all the ski features you could possibly hope for: spines, ridges, faces, hanging glaciers and couloirs. 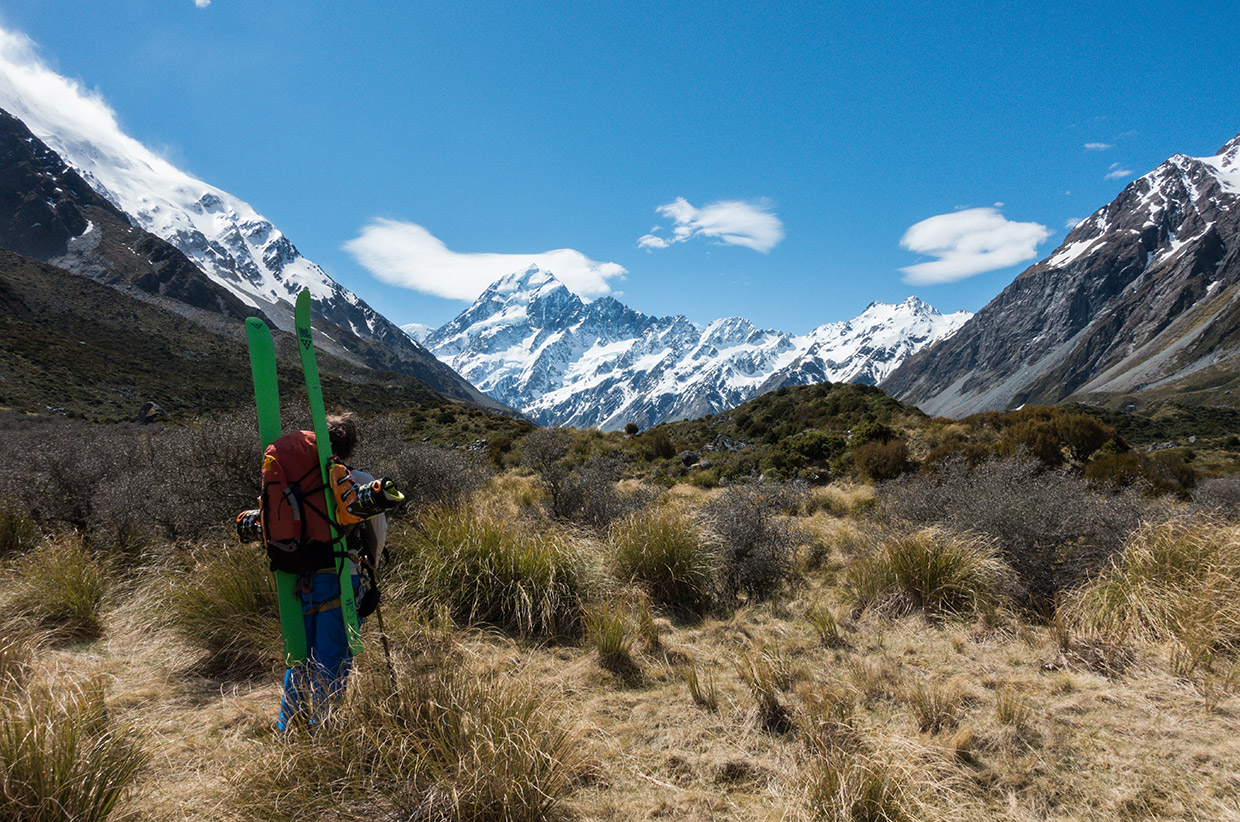 We transitioned in silence, feeling the pressure build in our chests but knowing to take our time to make sure things were done right: boots in ski mode, binding surfaces de-iced, skis locked on.

Once the next rip-roaring southwester cleared we took the ski plane in to the Tasman Saddle hut with the forecast showing a 48-hour window. Landing about noon we were pleasantly greeted with perfect conditions of cool temperatures and light wind. The opportunity was too good to miss and I was feeling too excited and nervous to sit around waiting in the hut all afternoon. We dumped our gear, ate a snack and downed as much water as possible before racing up Elie to catch corn time on the west face – snow that’s not too hard, not too soft, but just right. We lumbered up the steep east facing slopes in hideous crust and deep unconsolidated snow that was still undergoing transformation. As we arrived on the broad summit ridge the view expanded across the stunning west face; mountains stretched out to the subtropical jungle, tucked in under a sea of clouds. The sun beat down onto the slope and the corning snow below the ridge confirmed our timing was right. We transitioned in silence, feeling the pressure build in our chests but knowing to take our time to make sure things were done right: boots in ski mode, binding surfaces de-iced, skis locked on. Below, the slope rolled over in a vast expanse with no obvious feature to orientate us on our photo. Doubts about finding the right line added to my pre-ski nerves as the face had some serious obstacles we needed to avoid. For want of a better strategy, we decided to ski back along the summit ridge and simply handrail down the left side of the mountain. There was a niggling worry in the back of my mind that we would encounter some kind of un-skiable overlap that would require down-climbing. Would the route go sweetly or turn into some time-consuming mountaineering nightmare landing us in a crevasse maze below?

Low angled turns down the summit ridge helped loosen the muscles and sharpened my focus for what lay ahead. We paused briefly above a band of rime ice at the top of the face and without saying a word checked each other’s body language for psych levels. The brief moment allowed my brain to register the tension rising. Anxiety, doubts, fear, all trying to sabotage the day and make you turn back towards the safety of the hut. The driving forces of excitement, desire and inquisitiveness battling to keep you on track. For me the battle line between the two warring camps advances and retreats with my daily biorhythms and energy levels and equates to the overall feeling of psych. With the seconds passing it was time to focus the mind and become centred as we committed onto the face itself. We skipped the band of rime and sweet corn provided flawless skiing, letting us descend in fluid turns. The slope continued to roll over, finally reaching a maximum sustained pitch of about 45 degrees. To our amazement and relief the line of snow kept coming and led us cleanly off the face onto the Times Glacier with no obstacles to overcome. Skiing is just so much sweeter when the flow isn’t broken. 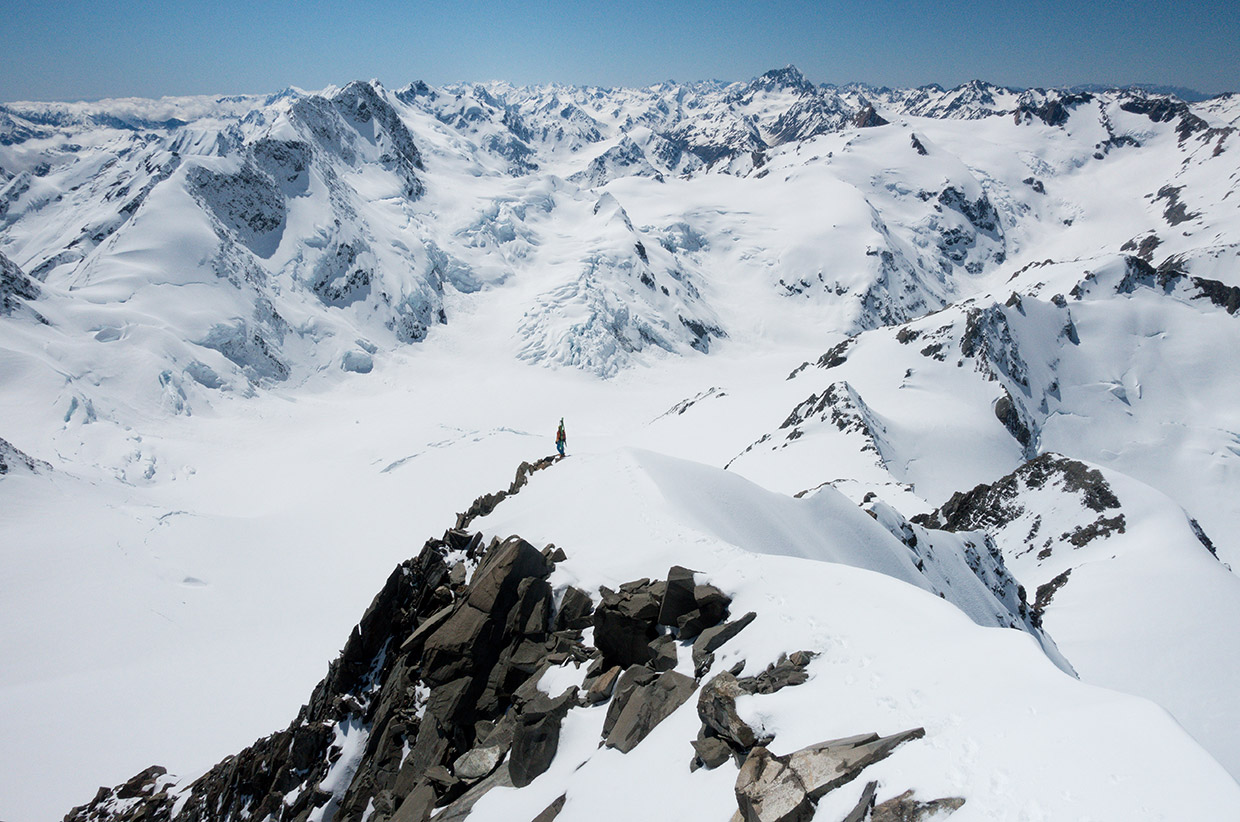 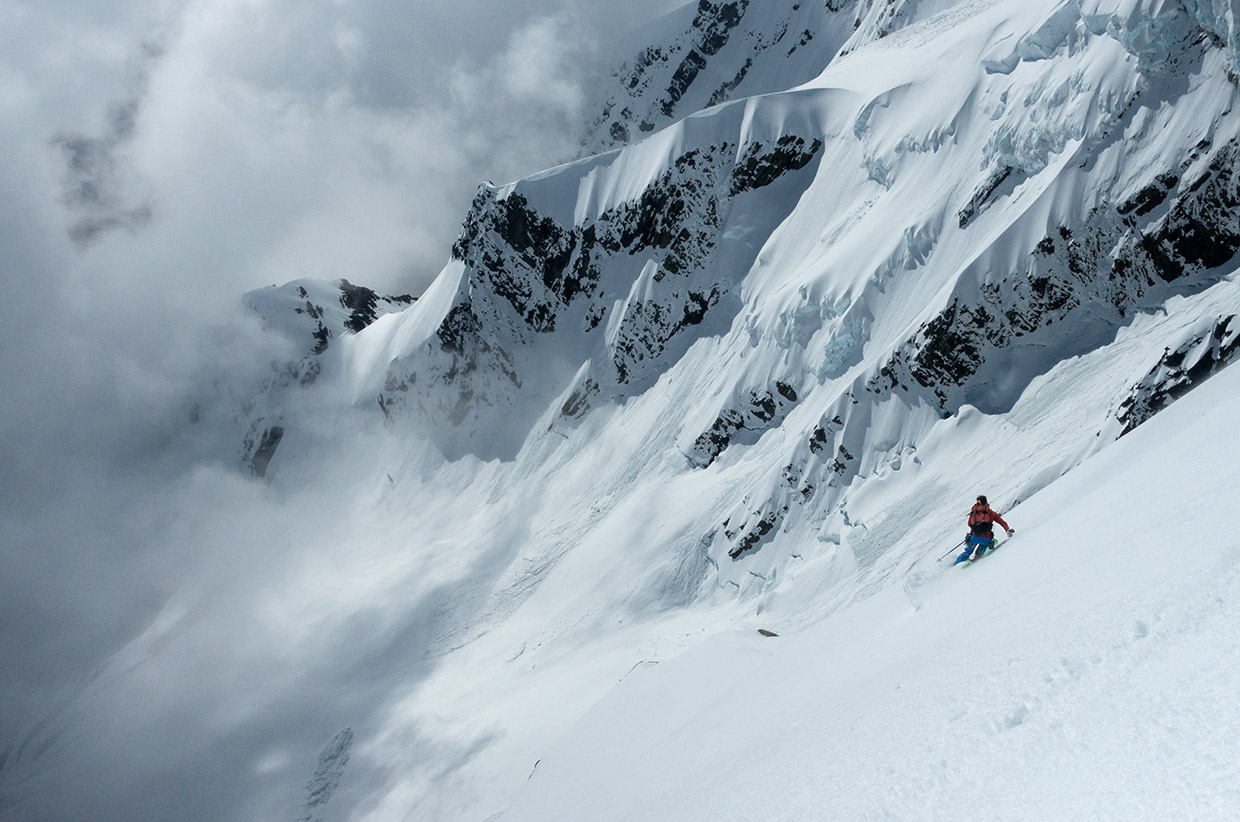 The second major unknown section of our journey lay ahead. As we surveyed the surroundings for a route back over the main divide, we decided to forgo the heavily crevassed trad route to Divers Col via the Stevenson Glacier and instead take the northwest couloir on Mount Walter. It was baking hot on the Times Glacier and we soon ran out of water. However, the sun was moving off and with the cloud level building our anxiety lay around losing visibility and navigating unknown complex terrain east of the main divide.

We made quick progress up onto the watershed, but before we could get our skis on the cloud rolled in and our visibility was reduced to a few metres. I had taken photos of the descent terrain on our way up Elie and these were crucial for us to determine the escape line – a beautiful knife edge arête that connected our hanging glacier to easy ground on the Tasman below. By this time the sun was low in the sky: skiing the arête in the dark was not an option. We window-shopped, travelling as fast as possible during each break in the cloud and eventually we located the start of the arête. At this moment visibility began to improve, allowing us to relax a little and enjoy intermittent spells of golden evening light. The arête provided some incredibly exposed turns with tails breaking through the crust one side and icy snow on the other. We stayed on the crusty side as it gave our skis more support and slowly found our way down to the Tasman Glacier; from there it was an easy hour skinning back to the hut and after the fast pace and challenges of the day, fatigue, thirst and hunger made themselves known.

Slowly a warm glow of satisfaction flooded through me as I had the first opportunity to reflect upon our outrageous idea, inspired by a photograph.

Ross grew up in the North East of Scotland and started skiing at the age of 7. Since then his skiing has morphed somewhat from resort skiing and slalom racing into ski mountaineering where an impressive list of achievements sees Ross at the forefront of the steep skiing today. Ross’s passion has him regularly exploring the big mountain ski lines in and around his home of Chamonix, France as well as adventuring the world most interesting mountain ranges around the world.

A Dream In The Clouds The Last Slice 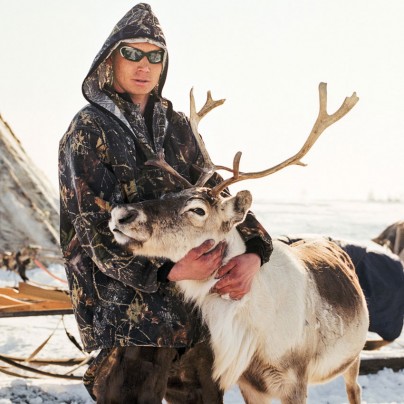 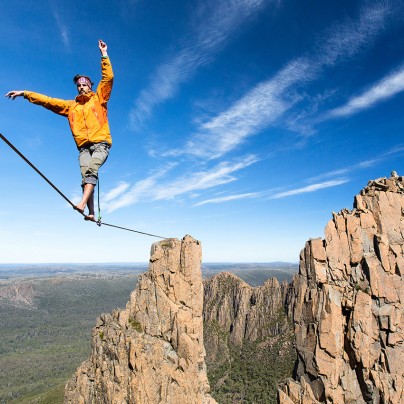 The Book of Laughter and Forgetting Simon Madden // Kamil Sustiak