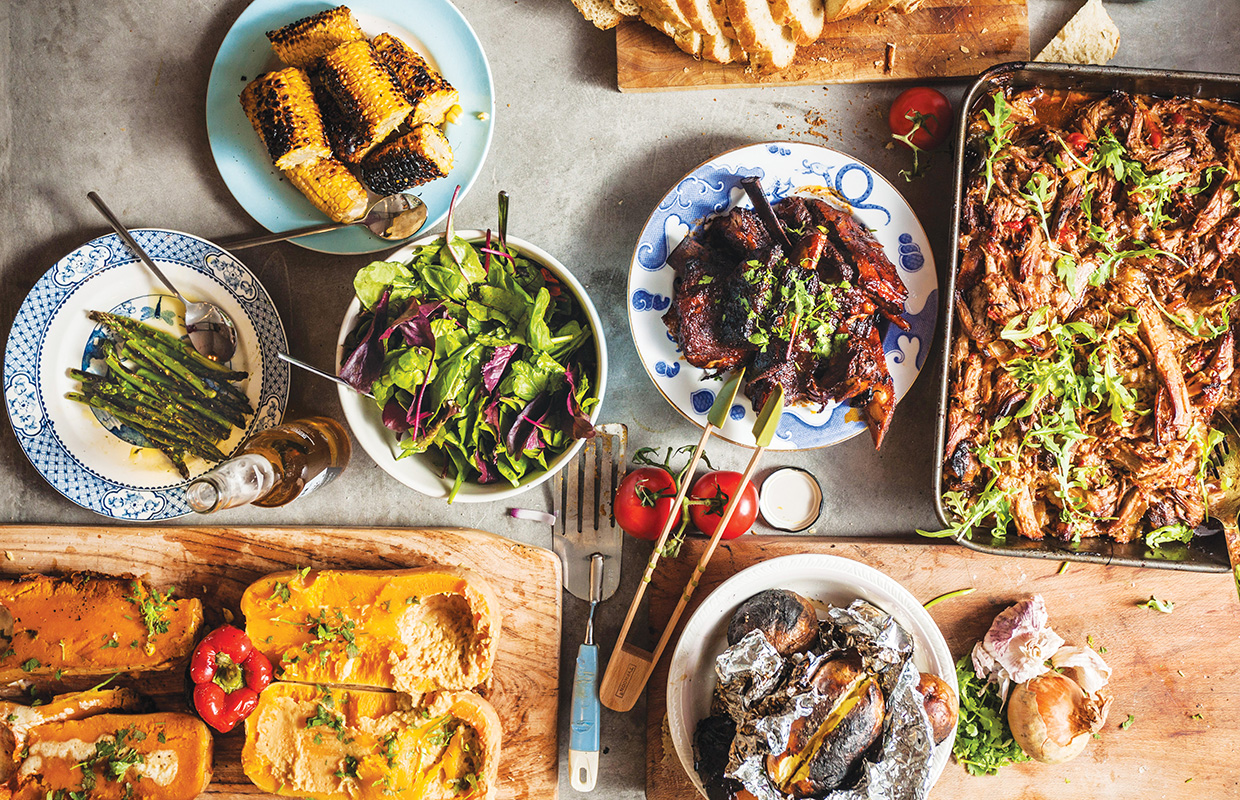 Lightly score the skin and fat of the pork joint with a sharp knife and rub lots of salt, pepper and allspice over it. Give it a good massage. In a deep tray or oven-proof pot, place the chopped carrots, celery and onion into the bottom and pop in the joint of pork. Pack it in nicely for a long bake.

Add the bay leaf and Coke and half the barbecue sauce. Next add water so that the joint is two-thirds covered up with a nice dark spiced stock. Cover tightly with a lid or foil and place in the oven for at least 6 to 8 hours. Low and slow is the key here.

Check after 4 hours, baste the juices over the joint or turn it over if it is looking dry on top. Re-seal with foil. After a very long time, take the joint out and give the meat a tug, it should pull off nice and easy. If not – back into the oven.

Allow to rest for about 30 minutes or so, then transfer the pork onto a tray. Transfer the stock into a pot to reduce down to a nice sticky consistency. With a pair of tongs and a fork, pull the meal off the bone. It should break off in long strands – basically attack the meat with a fork. If it’s quite fatty cut away the large bits, but stir in some of the smaller bits of fat. Transfer the pulled meat into a bowl and add in some more barbecue sauce or reduced stock to flavour. Ready to serve!

It’s not very often I say this, but barbecues aren’t just for meat! Grilling or slow cooking veggies over hot coals gives them a beautiful, smoky flavour. I like to use soft vegetables, like peppers, onions and aubergines, or sliced thin portions of fennel, sweet potatoes or pumpkin.

Corn On The Cob
The most popular vegetable for the barbecue is corn on the cob. Just pop them on the grill and rotate gently every few minutes. The barbecue sweetens the kernels nicely. Serve hot with salty butter.

Asparagus
Asparagus literally takes seconds to cook. As soon as the meat is cooked roll out a couple of bunches of asparagus on top of the grill. Keep an eye on them, roll them around every 20 seconds or so. They should be done in under three minutes. Pop them into a dish, sprinkle with salt and a knob of butter.

Peppers
Set a couple of whole peppers on the side of the grill while you barbecue away. Turn them slowly. Peppers take a little longer, and are juicy and delicious sliced up over the salad or eaten as they are. No seasoning is required.

Foil Wrapped Potatoes
Grab a potato per guest. Pop the potatoes into a bowl, drizzle with olive oil and a generous sprinkle of salt. Get your hands dirty and give the bowl a good stir. Make sure all the potatoes get a nice coating with the oily salt. Individually wrap each potato with foil and toss directly onto the hot coals just before you put the barbecue grid on. After 20 minutes turn the potatoes once. Leave for another 15 to 20 minutes depending on the size of the potato and the heat of the fire. Poke a skewer through one of the potatoes; if it slides through easily they are done! Keep them wrapped in a bowl until serving. It’s easier if the guests do the unwrapping. 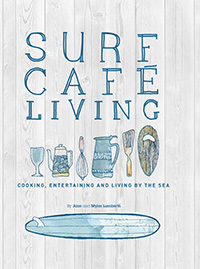 This recipe is from the new book ‘Surf Café Living’ by Jane and Myles Lamberth and we have three copies to give away. Surf Café Living encapsulates all that is great about coastal living; early morning surfs, community yoga, sensational sunsets, gloriously messy beach barbecues, outside gatherings and candlelit dinners, the fresh sea air and the sand between your toes.