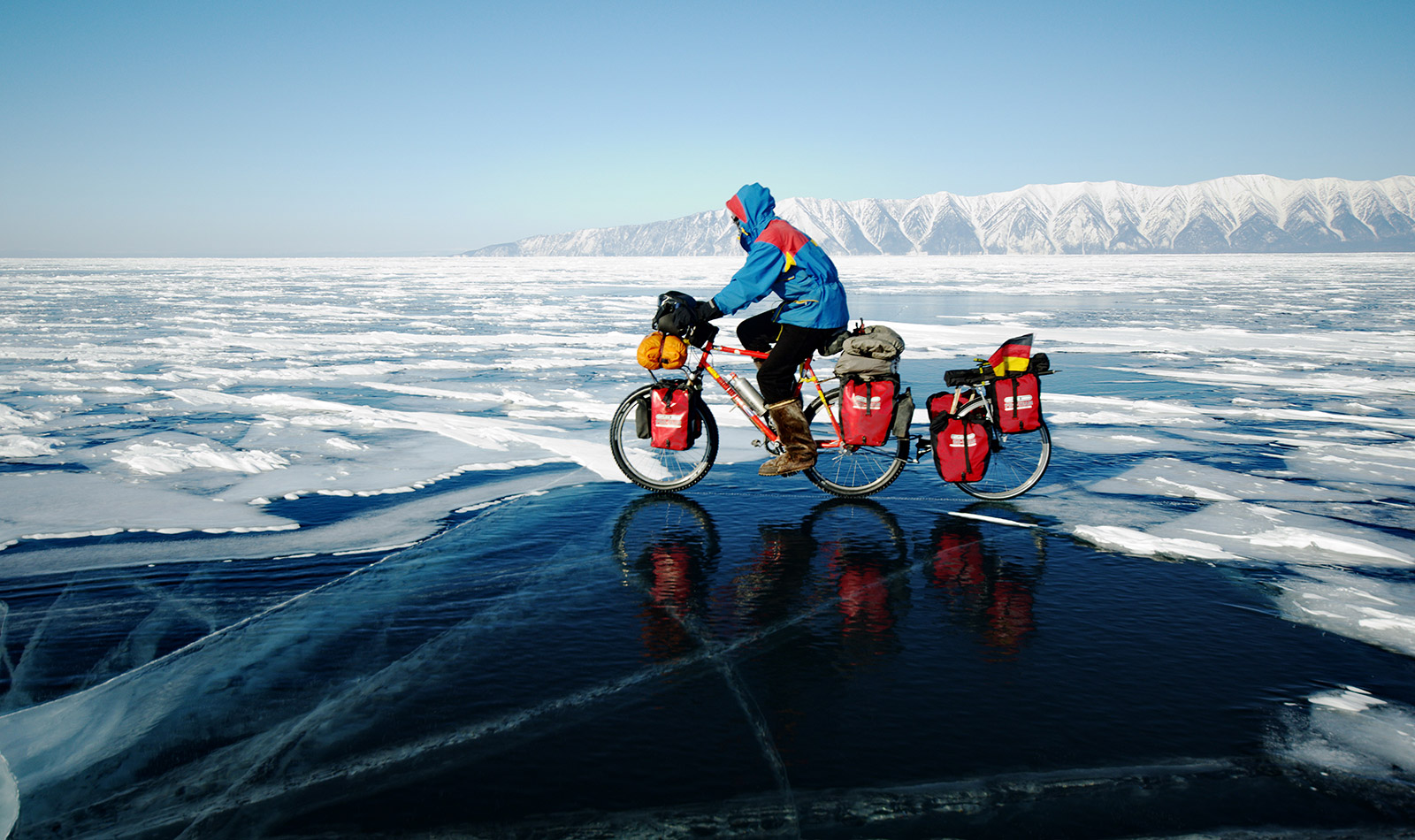 For many years we have enjoyed exploring remote regions of the world, mainly by bike. After several adventures exploring high altitude regions, we became interested in a winter bike trip. We quickly fell upon the heart of Siberia: Lake Baikal. It is well-known for outstanding natural beauty and for its surrounding high mountain ranges. Consequently, the region offering amazing scenery. The lake completely freezes over in winter and the locals use its surface as a winter road. This seemed ideal for a winter cycling adventure.

Lake Baikal is a considerable distance from our home in Germany, so we needed five days on the Transsiberian-Baikal-Amur train to reach the starting point of our cycling tour in Severobaikalsk at the northern part of the lake. It was a shock to the system to leave the warmth of the train and enter the minus 25ºC January day and so we took a couple of days to adapt to our new environment. From then on, our daily rhythm was defined by the outside temperature, the day length and the total time period of five weeks we had available to finish our tour to the South tip of the lake.

So, on 31st of January, in wonderful, cold winter weather we cycled to Nishneangarsk to start our trip at the northern point of the lake. However, on the next day, we experienced the diversity of Siberian Winter with dark, portentous cloud and snow flurry. It was hard to see the car tracks heading south to Baikalskoje in these conditions, and cycling on snow was generally very tiring. It became pretty clear that weather, wind, snow and ice conditions were the dominating factors and we would have to adapt our daily schedule to these conditions.

It was a shock to the system to leave the warmth of the train and enter the minus 25ºC January day and so we took a couple of days to adapt to our new environment. From then on, our daily rhythm was defined by the outside temperature, the day length and the total time period of five weeks we had available to finish our tour to the South tip of the lake. 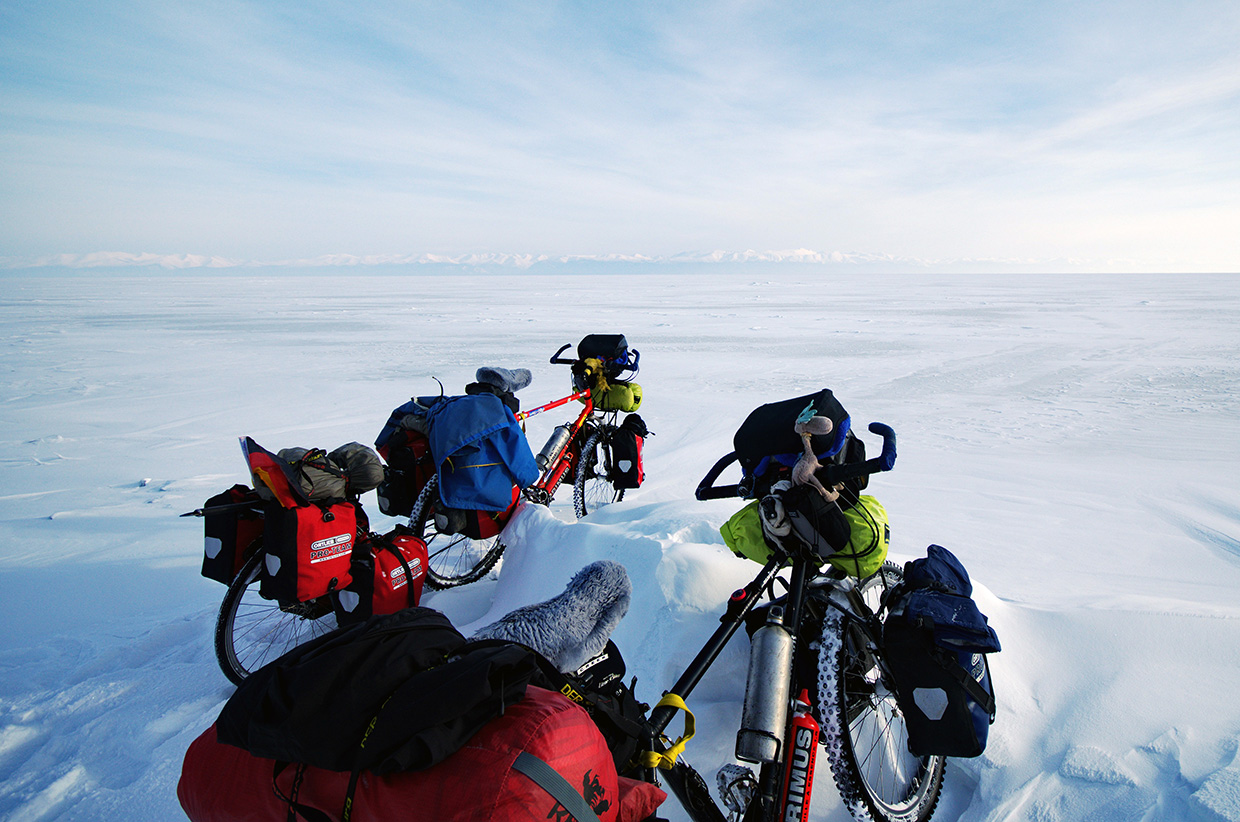 Although the lake is frozen with a thick layer of ice, some sections of the ice are in constant movement. Especially during low night temperatures and in full moon period, cracks appear and move. One never knows how far away from the tent new cracks will open

Our first night on the lake was rather unpleasant as we were constantly wakened by the cracking and snapping sounds of the ice beneath us, sounding like thunders or earthquakes moving through the ice below us. Although the lake is frozen with a thick layer of ice, some sections of the ice are in constant movement. Especially during low night temperatures and in full moon period, cracks appear and move. One never knows how far away from the tent new cracks will open.

We quickly learned where to find “quiet” zones on the ice or we simply pitched our tent on the shore of the lake. A good night’s rest was vital for us, as we were active basically from sunrise to sunset every day. The route we followed took us from Nishneangarsk to Baikalskoje and further south to Kotelnikovskij. From there we crossed the lake to the East coast to then follow the car track south via Davsha and Kurbulik to Ust Bargusin. Then, we crossed over to Olchon Island and continued South along the West coast to Listvianka. Endpoint of the ice-bike adventure was in the town of Kultuk. The Northern section of our tour was the hardest in terms of snow cover, on some days we had to push our bikes for many hours and kilometers through deep snow. Our daily mileage varied from 25 kilometers to 60 kilometers depending on ice and snow conditions.

The coldest nights we experienced in the snowy parts in the North. Snow was too deep for cycling, and for hours we lost any good car track. There was no choice, but to push and drag the bikes through ankle-deep snow. Hour after hour passed and our progress was desperately slow. Temperatures were at minus 35ºC and due to the arduous physical work of pushing the heavy, fully-loaded bikes, we were soon covered in a layer of snow condensing on our faces and clothing. In the late afternoon, finally and to our surprise, we reached a car track running south along the east coast. After twenty frustrating kilometers on foot, we now enjoyed another half hour of good riding before we pitched our tent in the last of the sunlight.

Temperatures dropped as the sun disappeared behind the horizon, and at these low temperatures, properties of materials changed drastically. The PVC-plastic of the panniers became rock-hard and simple procedures like packing and unpacking stuff took considerably longer than usual. Also rubber bands connecting tent poles lost their elasticity, so that putting up the tent also was more difficult and took longer than anticipated. Once the tent was set up, one of us usually took the ice axe to chop off some fresh-water ice cubes to melt for our daily water supply. Lake Baikal is one of the cleanest sweet water lakes and water is drinkable and of high quality.

A few days later, we were rewarded for the hard work in the snowy sections: south of Ust Bargusin, finally we found the ice conditions we were hoping for and dreaming of. No more snow, but a huge black plain of ice extended all the way to the horizon. Our studded tires were just right and gave us good riding grip. It took some time before we had full confidence in the surface we were riding on. Especially, when looking into the distance, the clear ice surface took on the appearance of still liquid. Patterns of small waves could be seen, as if the wind moved the surface of a still lake. However, everything was solid hard, frozen in time. Patches of ice, rich in air, alternated with clear sections of ice. White cracks ran through the solid ice and we found fascinating patterns of air bubbles. In bright midday sun, the surface of the lake became a huge mirror. 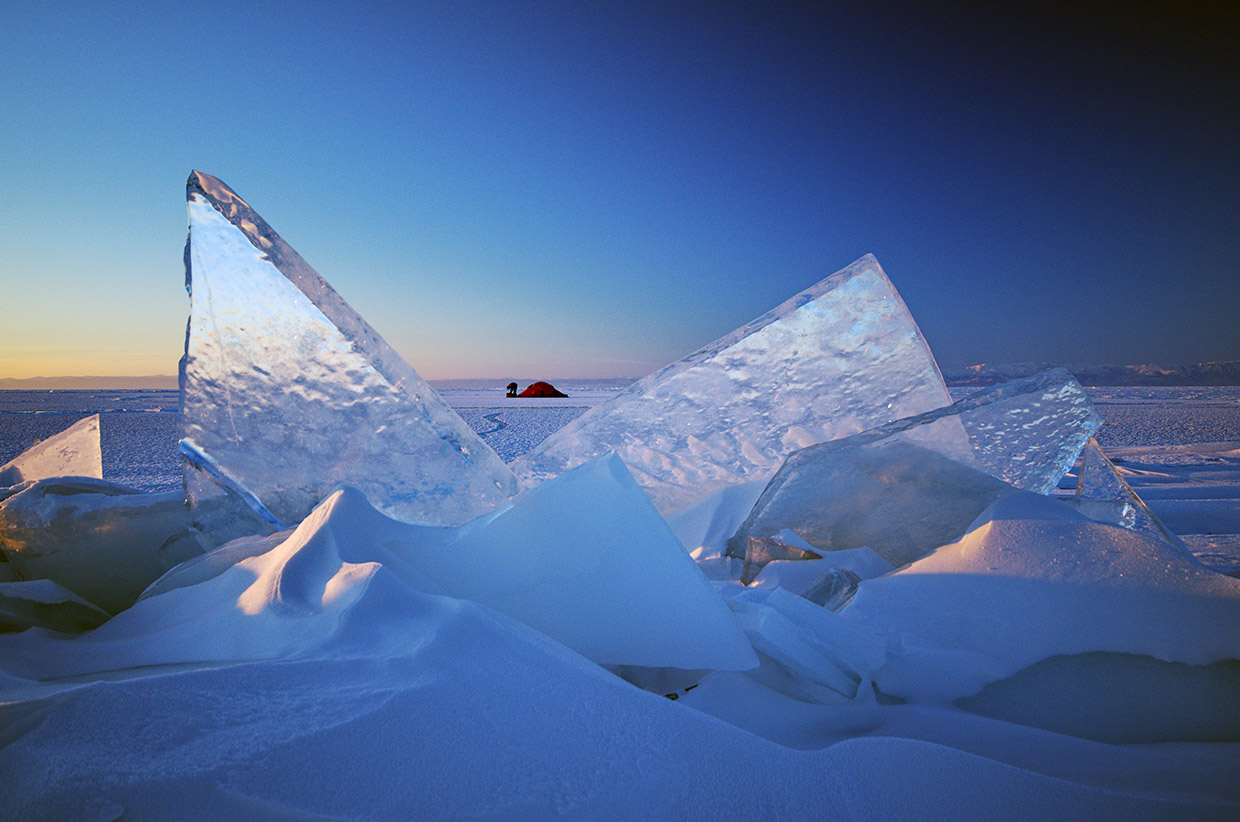 Finally, we enjoyed the endless freedom of being able to move in any direction. We were not trying to break any speed records and had to keep in mind that, at cold temperatures, it was not sensible to breathe in too heavily. When speeding across the ice, only a meter of solid water separated us from the deep darkness of the lake. Lake Baikal is the world deepest lake with up to 1600 meters in depth, and now we were about to cross over precisely at this deepest part. A frightening thought, that just a meter of ice was enough to give us this freedom of riding and the safety of not breaking into the deep void of the lake. Every now and then, our ride was interrupted by large cracks where ice plates had piled up to a meter high. Amazing forces become apparent when ice is moving and pressing. For us, these cracks were never real obstacles, it was always easily possible to find a gap between stacked ice plates to push the bikes across.

We headed towards Olchon Island and followed the lonely East coast of the Island, then continued south towards Listvianka. The east coast of Olchon Island was particularly impressive. We relaxed on the remote shore, taking in the landscape and the almost flat, sable ice; conditions ideal for cycling. There we no humans for miles but we saw many wolf tracks and heard the animals howl at night. Moments like these you remember, and make you forget the hours of pain and endurance to get to this point. And make you yearn for more.

During the final weeks we battled with deep snow conditions and strong headwinds. It seemed the lake would not allow us to finish. However, at midday on March 2nd, we reached Kultuk after 27 days of cycling and covering a distance of 1075 kilometers on the ice of Lake Baikal.

Although being physically strenuous, we enjoyed the beauty of Lake Baikal and the harsh conditions of a Siberian winter. We met very friendly and helpful locals who made our adventure a special and pleasant memory.

Waltraud is a biologist with passion for plants and their adaptations to difficult environments. While in her job as a professor of Plant Systems Biology at Hohenheim University, Germany she has a lot of computer work to do, she regularly maintains sufficient time for exploration of the real world remote regions.
Waltraud has since her childhood been an active outdoor’s person particularly in mountaineering, trekking, and cycling (mountain bike, long-distance randonneuring). In the recent years, together with Andy Heßberg she set her focus on self-supported expedition style adventures on bike and on foot to central and high Asia as well as Siberia and the Russian Far East. She is co-author of travel guides as well as books about their adventures.

The Pole Of Cold On Skis Across The Baltic 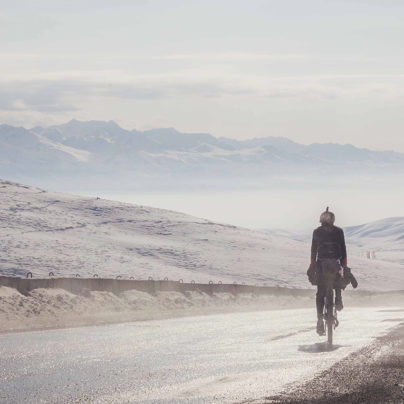 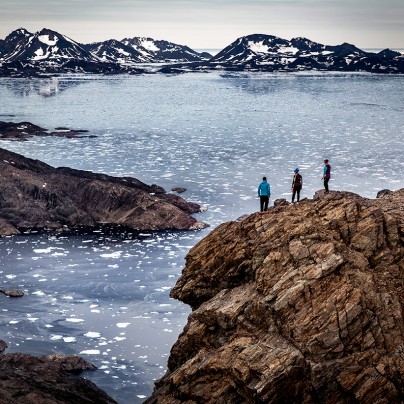