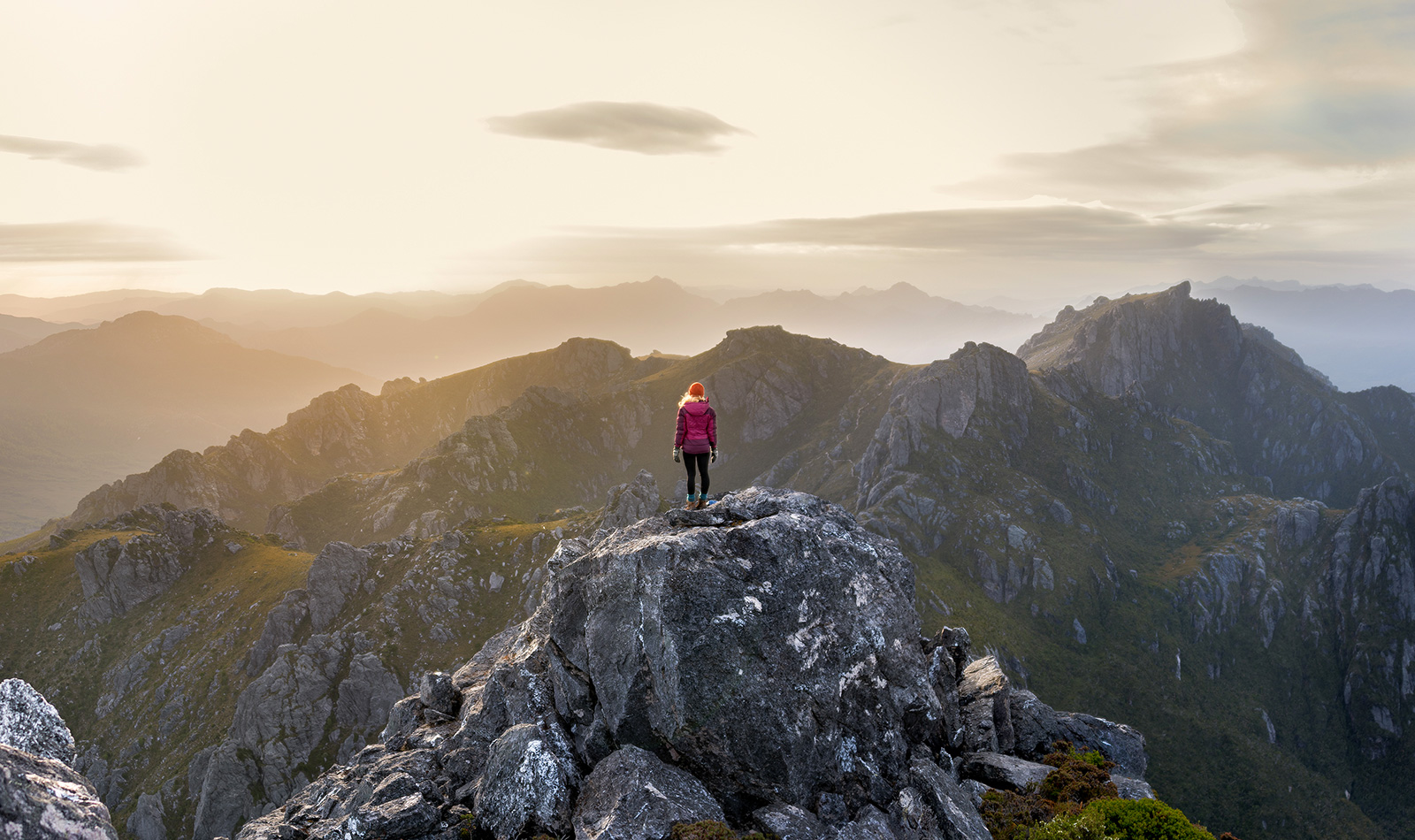 Swirling wind whipped our shelter with a ferocity I had not encountered before. The tunnel tent swayed helplessly within the maelstrom. It was 3.00am and I had not slept a wink. The noise of flapping nylon, and then the partial suffocation as the walls leaned in for a long pause over my face, made it impossible to focus on anything but the storm. I never doubted the equipment, but I was extremely aware of the agitated rustling from my girlfriend’s sleeping bag as she lay next to me. She was experiencing her first multi-day hiking trip. The difficulty of the terrain combined with a dubious weather window made circumstances less than ideal for a first timer.

It had been five years since I had last been on home soil. Constantly searching for adventures on foreign shores, I had become addicted to the unknown, the thrill of the unpredictability that comes with journeying into these different worlds. Finally, Tasmania, my home, was calling. But I wondered if it would live up to how I’d always remembered it: wild. Raw. Unpredictable.

A break in our work schedule had us closely examining the forecast for the next week. Weather travels westerly from the southern tip of South America, creating erratic weather systems that steam across Tasmania’s coastline, situated within the Roaring Forties. Desperate to get our adventure fix we decided to roll the dice and head to the Western Arthurs for a five-day hike. The skyline traverse of these mountains would be a gruelling introduction for Lova my girlfriend, as a first timer, but with the promise of endless jagged peaks and the appeal of remote wilderness I knew she would tough it out.

As we strode through the lower Arthur Plains, the Western Arthurs Range rose high above us, only the rocky summits concealed by cloud. Slowly gaining elevation allowed us to see the coastline where a large mass of rain-laden nimbostratus was bearing down on us. I swallowed hard. The first seed of worry was planted. Soon the rain began, but we embraced the precipitation that cooled our hard-working sweaty bodies. A big adventurous grin still shone from Lova’s face as I turned to see her enthusiastically matching each one of my strides, contradicting my initial fears. I convinced myself the rain was going to pass as we climbed even higher towards the summit.

Constantly searching for adventures on foreign shores, I had become addicted to the unknown, the thrill of the unpredictability that comes with journeying into these different worlds 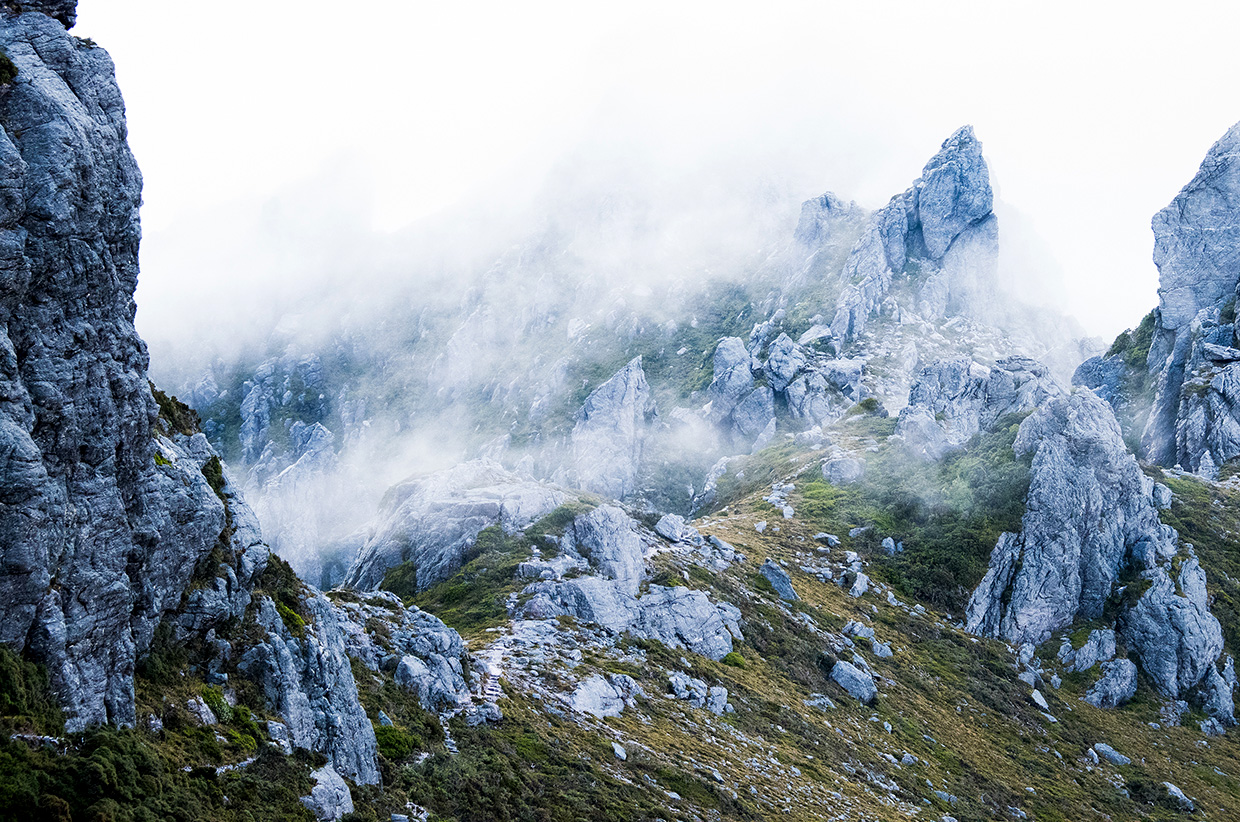 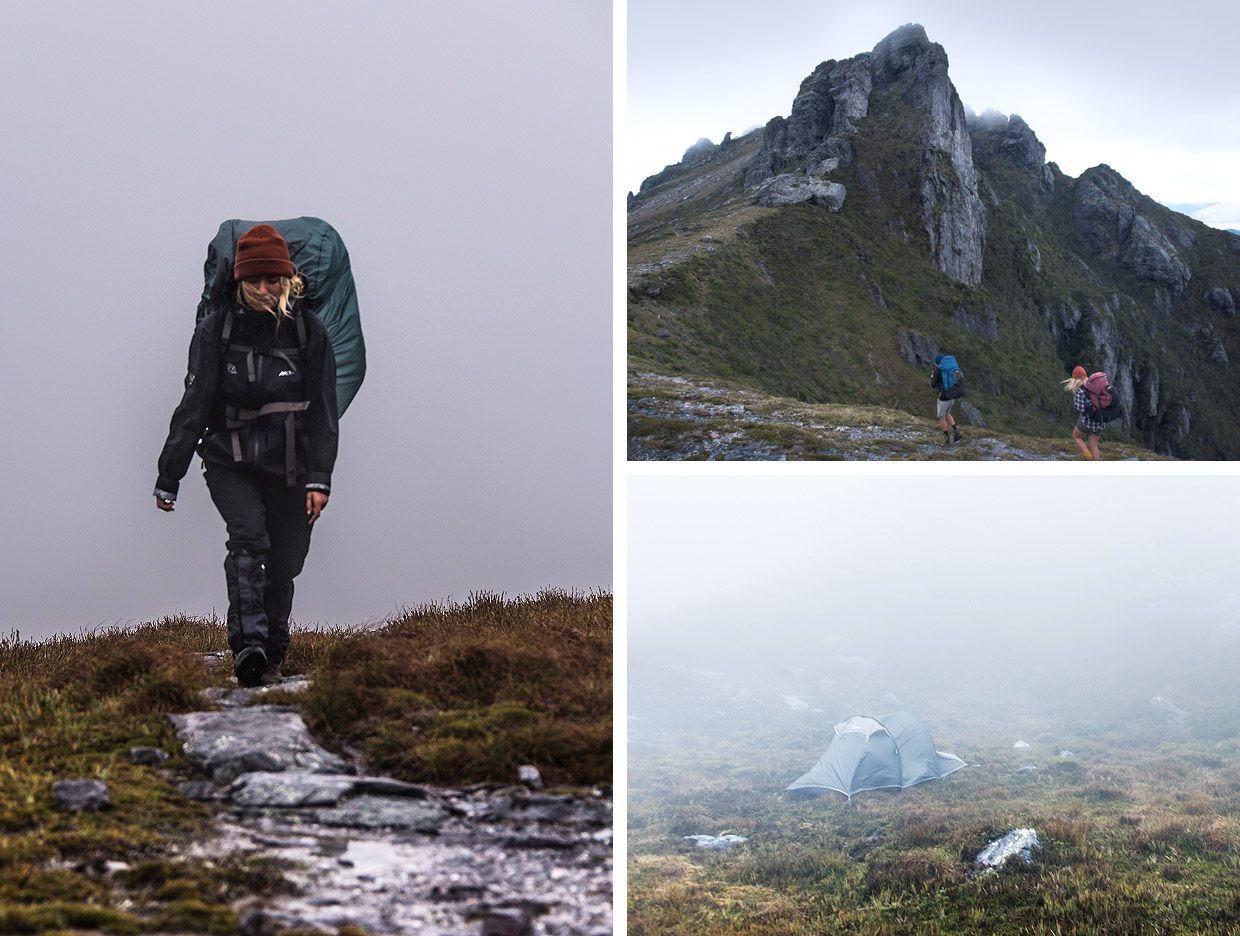 Daybreak came with only one change: impenetrable white replaced the darkness. We were now engulfed in dense fog that reduced our visibility to a mere metre or so. Rivers flowed under sections of the tent, rendering half of it uninhabitable.

Exhausted after the hard climb, Lova gladly threw her pack down where we assembled our home beside Lake Fortuna for the night. This picturesque hanging lake surrounded by weather-carved rock formations seemed to be an idyllic place to rest up and wait out the weather. The rain intensified. Engulfed by the blissful sensation of lying warm and dry in our tent, we had no idea how small and vulnerable we really were. Then it began. The wind increased, howling down on us, and we shared a glance.

I made several dashes into the tempest, muddling adjustments to make our home more stable. For the sake of saving a few ounces I had left the extra tent pegs at home, a decision that seemed inconsequential when in the security of a warm, dry house. I cursed that choice now as I shifted heavy rocks to anchor the guy-ropes, but it was to no avail. The tent would halve in height as a gust drove it one way before sharply whipping it straight back in the other direction, instantly shifting the anchors vital millimetres. We could feel the ground beneath us become soggy and waterlogged. ‘Are we going to be OK in this tent?’ Lova asked, worry heavily set in her voice. I smiled, and quickly replied, ‘Yeah, the Kiwis designed this bad boy and they love their foul weather over there.’ A dubious look, maybe a little sarcastic, was thrown my way while I tried to laugh off my pathetic answer. But I knew I had to play it down. Both of us craved morning light and lay there with eyes fixed on the shifting ceiling. Dawn could not come quickly enough.

Daybreak came with only one change: impenetrable white replaced the darkness. We were now engulfed in dense fog that reduced our visibility to a mere metre or so. Rivers flowed under sections of the tent, rendering half of it uninhabitable. Groggy from lack of sleep, we discussed our options; not one was appealing. I wasn’t willing to risk the traverse of a slippery mountainside trail with abysmal visibility and gusts that you braced for like a rugby player expecting a hit. Lova begrudgingly concluded the obvious, ‘Well I guess we’re trapped here until the weather changes, aren’t we?’ Hunkering down in our sodden surroundings, again we waited.

Late evening the fog lifted enough for us to saddle up and push for a less waterlogged locale. It is always a humbling experience being at the mercy of a weather system, but now that we could see our stunning surroundings again, high on the crest of the Western Arthurs, the hopelessness of our camp receded and I started feeling the love and respect for our environment again as we pushed on along the trail.

The next morning, after waking from a deep energy-replenishing slumber, a warm yellow glow engulfed our tent. We unzipped the fly and were instantly hit by bright morning light backed by cloudless blue. The sun’s kindhearted rays made us jitter with excitement. Hiking up to the first saddle above us revealed a vastness of plains and lakes in one direction, and a string of coarse mountain peaks shimmying their way down the range in the other. The south-west region now glimmered in the open skies with no visible sign of the previous 30-hour storm. 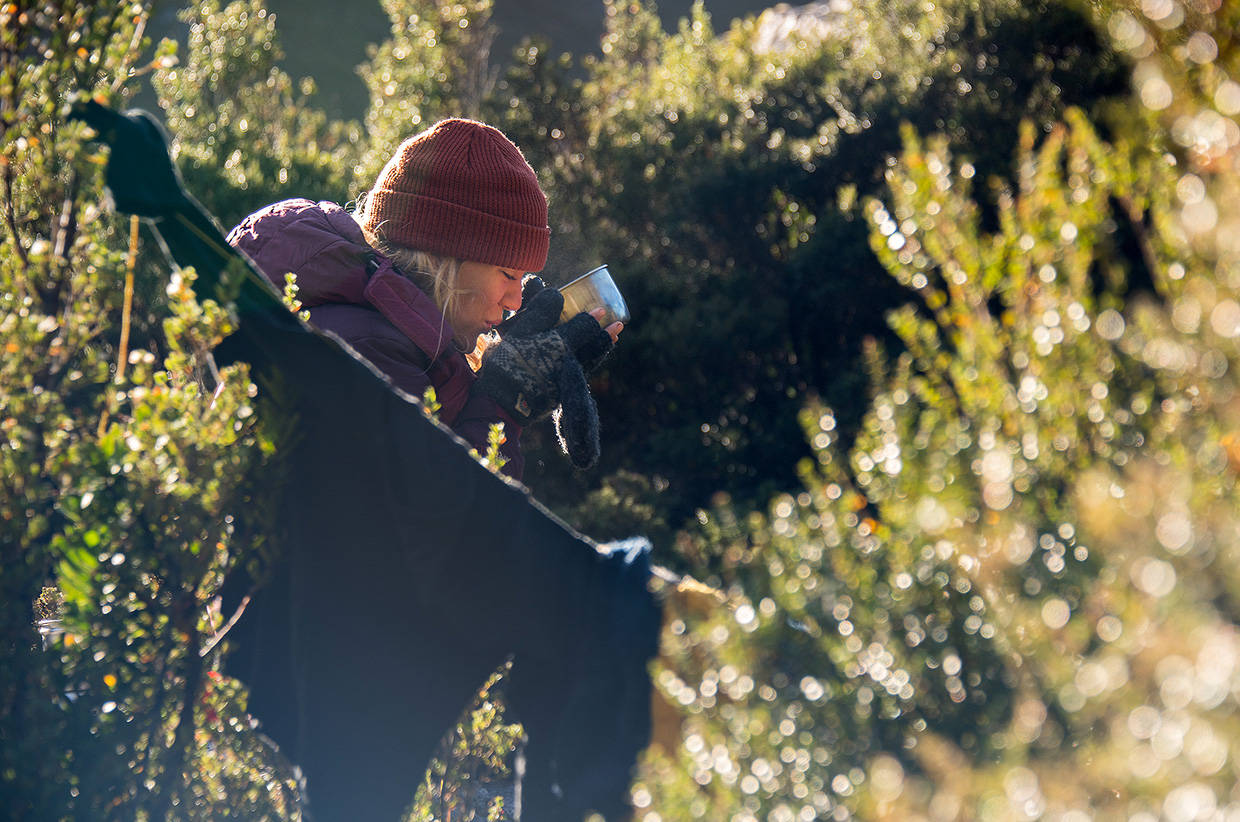 It was hard work, and we now understood why the traverse of the Western Arthurs is one of the most demanding walks in Tasmania. But we instantly forgot our hard-blowing lungs and burning thighs as we swayed 360 degrees, mouths open and eyes gaping in awe. A full day of climbing and descending had us filled to the brim with wonder and astonishment at each change of aspect. The sun dipped and golden waves coursed over the undulating landscape as the cloud formations shifted. Pressing back for a full sunset show on the saddle above camp, our strides lengthened and our hearts raced as the sky slowly transformed from dreamy pink hues to a vivid backdrop of flame. Shell-shocked again, we stood in silence and watched as the magma sky shifted our minds from reality into a phantasm-like state.

As we lay motionless and thought back on the last gruelling 72 hours, I found it hard to conceive that this was my home state. Rugged wilderness united with a turbulent climate crafted an aspect of Tasmania I had not witnessed before. In reflection, I realised that spending more time wandering foreign shores had forged a deeper connection to my homeland. Perhaps I am biased, perhaps it was the storm, or perhaps it was the remote wilderness; whatever it was, we both agreed it was the most mind-blowing place we had ever been.

After a rollercoaster of emotions, we made a final decision to turn our backs on the mountains and hike back through the plains a day early. This time it seemed the decision was easier than most premature endings to outdoor adventures. As the clouds gathered once more and the wind gusted, our minds and hearts were content. In this unpredictable environment being greedy would only be foolish. We got our adventure fix, learnt our lessons, surpassed our expectations, and were undoubtedly tamed by nature.

Jess is an avid traveller with adventure running through his veins. After spending time doing some soul searching his is now getting back to basics on The Sunshine Coast in Australia. While he is sitting still for now the next adventures are already being planned.
Facebook: /jbondephotography
Instagram: @j_bonde

It’s Not About The Summit Return to the Arctic 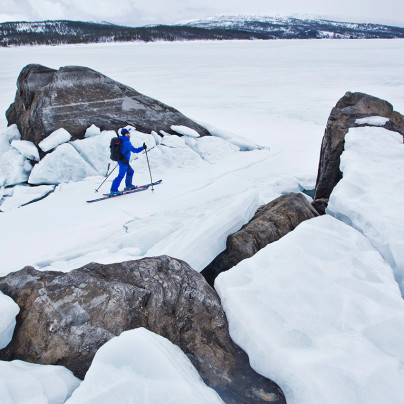