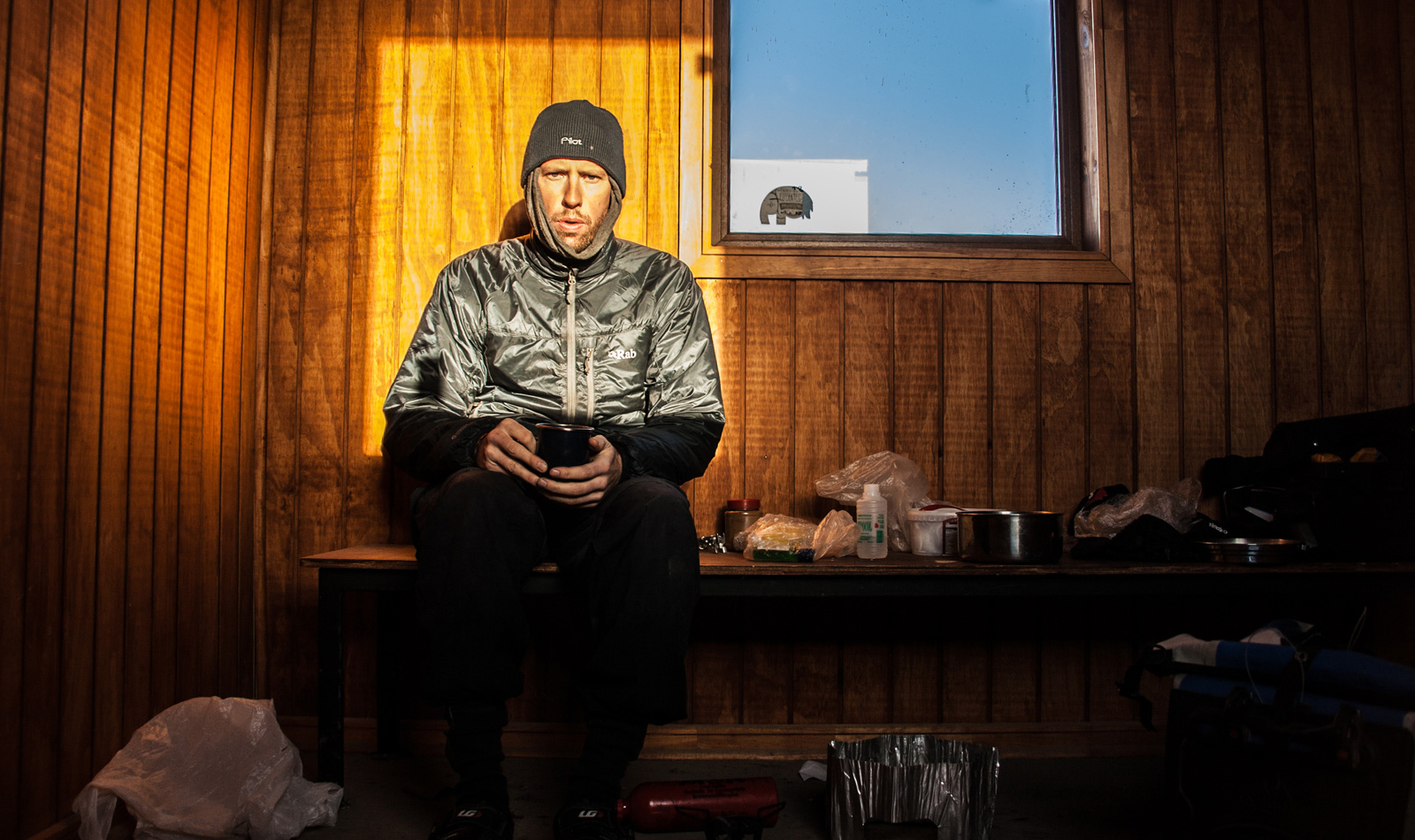 Sitting in the waiting room at the Argentine Customs post of San Sebastian, my dream shattered on the floor in front of me. It had turned into some kind of living nightmare I couldn’t escape from. Tormented by the wind for days with only occasional respite, exhausted and demoralised, drowning in self-pity, I did the only sensible thing I could do at that time. I ate. It was around midday. I had already dug deeper than I thought, just to get here.

The room was heated. There was a sink with running water and even a stove to cook with. Next door was the en-suite toilet, the only thing missing was a shower. This was the perfect staging post to collect myself and go again. But my head was gone. The last few kilometres had broken my will. I sat there and decided that this was too much; I was in over my head. I knew this first part of the trip was going to be one of the hardest parts because of the wind. I’d underestimated it, maybe I was just hoping that I’d get lucky and it would be okay. It wasn’t okay, it was far from okay. As the wind roared outside I slipped inside my sleeping bag and slept for a few hours. I was mentally and physically drained, crying out for rest.

That evening, as I considered my options, a number of hitchhikers came through there, all managing to get lifts. One even spoke to a Japanese cyclist who had left Rio Grande the same day as I had, but had made it much further down the road – twice as far as I had, in a day when I physically couldn’t manage any more. This road was meant for a certain breed of character, one much stronger than me, physically and mentally. I was out of my depth.

The other issue was the road from here on was gravel and there were no settlements until Porvenir, 160km away. Open land where the wind would take no prisoners.

It was 15km to the Chilean Border post, another 25km to a shelter of some description by the road, 20km to a bus stop, 40km more to another bus stop and an estancion I could camp at. All possible places of safety – shelter from the wind. Then the final 60km or so, with nothing apart from the relief of the land for protection. I looked at my out-of-date wind speed forecast for the next few days – up to 100km/h wind. It just wasn’t possible to cycle it.

This was the perfect staging post to collect myself and go again. But my head was gone. The last few kilometres had broken my will. I sat there and decided that this was too much; I was in over my head. 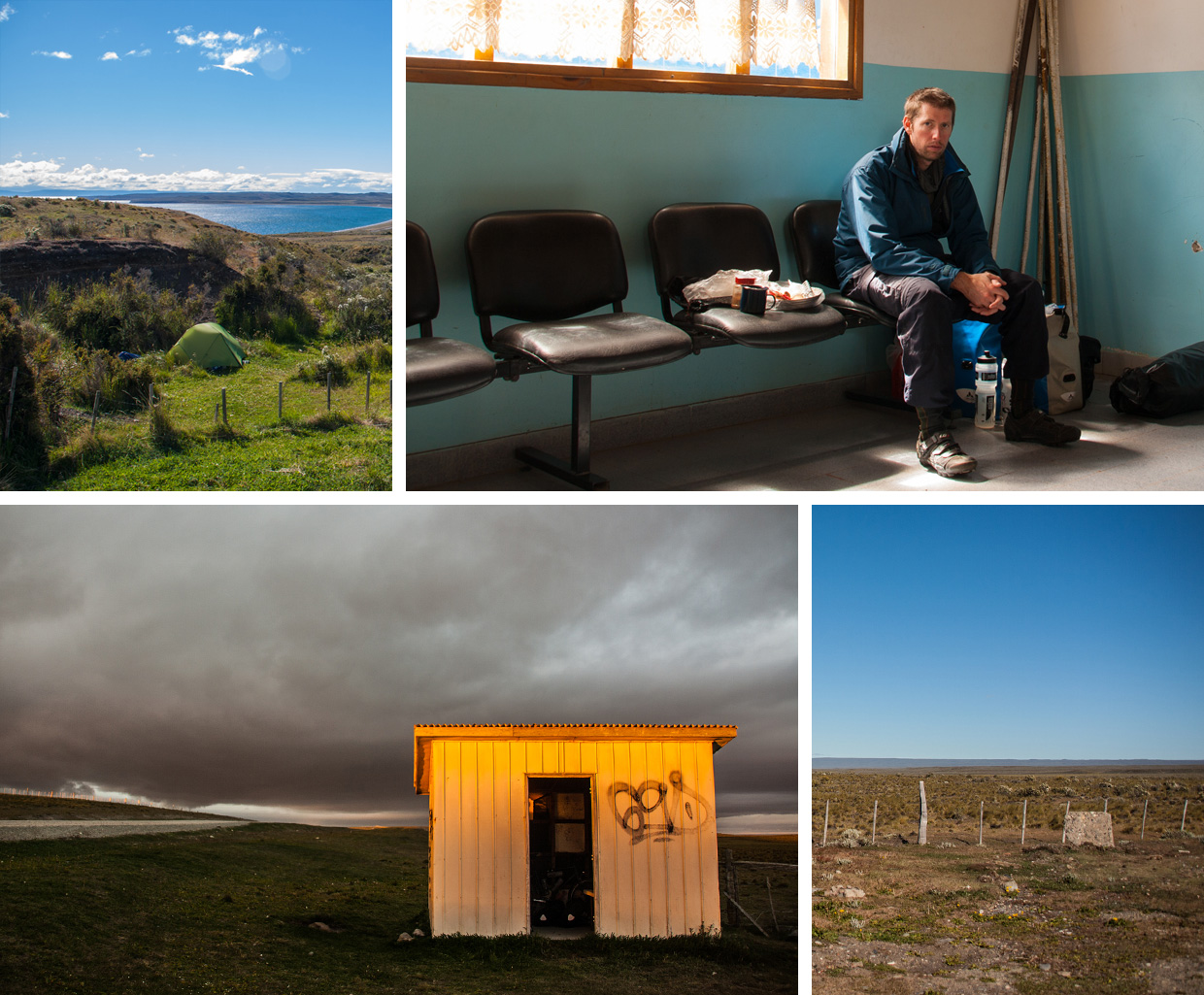 As I cycled out of the border post, down the dusty, gravel road, the horizon stretched out in front of me. As I gazed west towards the setting sun, the excitement flooded back, but when it got dark the wind started blowing hard.

I went to sleep on a wooden bench in the waiting room that night with no real intention of getting up to cycle in the morning. When I woke, the howling outside confirmed it. I ate a bland breakfast and went to speak to the border guards. If I was to try and hitch out of there, I needed to get stamped out of Argentina first as a lift wouldn’t wait. What if I didn’t get a lift though? After some discussion, they said go get stamped out, so I did. I walked back to the waiting room, now officially ‘between countries’ and wrote Punta Arenas on a piece of cardboard.

It was 8.30am. I had quietly tossed my dream away and began asking for a lift from anyone with a vehicle that looked big enough to get the bike in. I got two positive responses, both of which evaporated when they realised there was a bike involved. I was that close to getting out of there on four wheels not two.

By mid-afternoon, I was despondent and still without a means of escaping Argentina. I wondered what the border guards would do as I had been stamped out of Argentina that day – a bridge to cross if I came to it. Unable to cycle on, and unable to hitch, my only other option was to cycle back to Rio Grande and get a bus from there to Punta Arenas. This utterly depressing thought was the spark which made me rethink. I studied the wind forecast again and the distances to the shelters. The wind was forecast to be less at night – still strong but manageable. More like only 50kmph. Only.

I managed to convince myself that, although it seemed like madness to cycle into the night, in this wind and on this road, it was infinitely better than cycling back to Rio Grande. My mind was set and I would leave at 9pm. I would ride to the Chilean border, rest for an hour or two, then try to reach the first shelter. If I could make that shelter I was still in the game. I grabbed a nap.

Just before leaving, as I was packing, four English guys arrived on bikes. They were planning on hitching from where we were instead of riding the road. I told them about my experience and left them to ponder overnight.

As I cycled out of the border post, down the dusty, gravel road, the horizon stretched out in front of me. As I gazed west towards the setting sun, the excitement flooded back, but when it got dark the wind started blowing hard. I arrived at the Chilean border post just before midnight. Still wearing my cycle helmet, I approached the immigration desk, a line of officials behind the counter. I understood enough of their startled conversation – what the hell is this guy doing on a bicycle at this time of night? I told them my story in stilted spanish. They know about the wind here, it’s not a glamour posting and they tended to agree that it was less at night.

Instead of having my bags x-rayed, I received a man with a torch who didn’t want to be outside in the cold. I volunteered the small amount of honey I had left as a sacrificial lamb and he didn’t look very hard in my bags – the benefit of crossing a border at midnight. We went back inside and I asked the immigration official if I could just rest there for a while. He was fine about it, clearly taking me for a madman that I was cycling at this time of night. I stripped off my damp, sweaty layers and dried them on the radiator. As I warmed myself by it, the same immigration official called me over.

Would you like a coffee? he offered.
Si, si, si, por favour, muchos gracias!

He didn’t need to do that, and probably shouldn’t have, but I sat and drank my sweet, black coffee. It’s warmth, along with that simple human gesture, buoyed me. 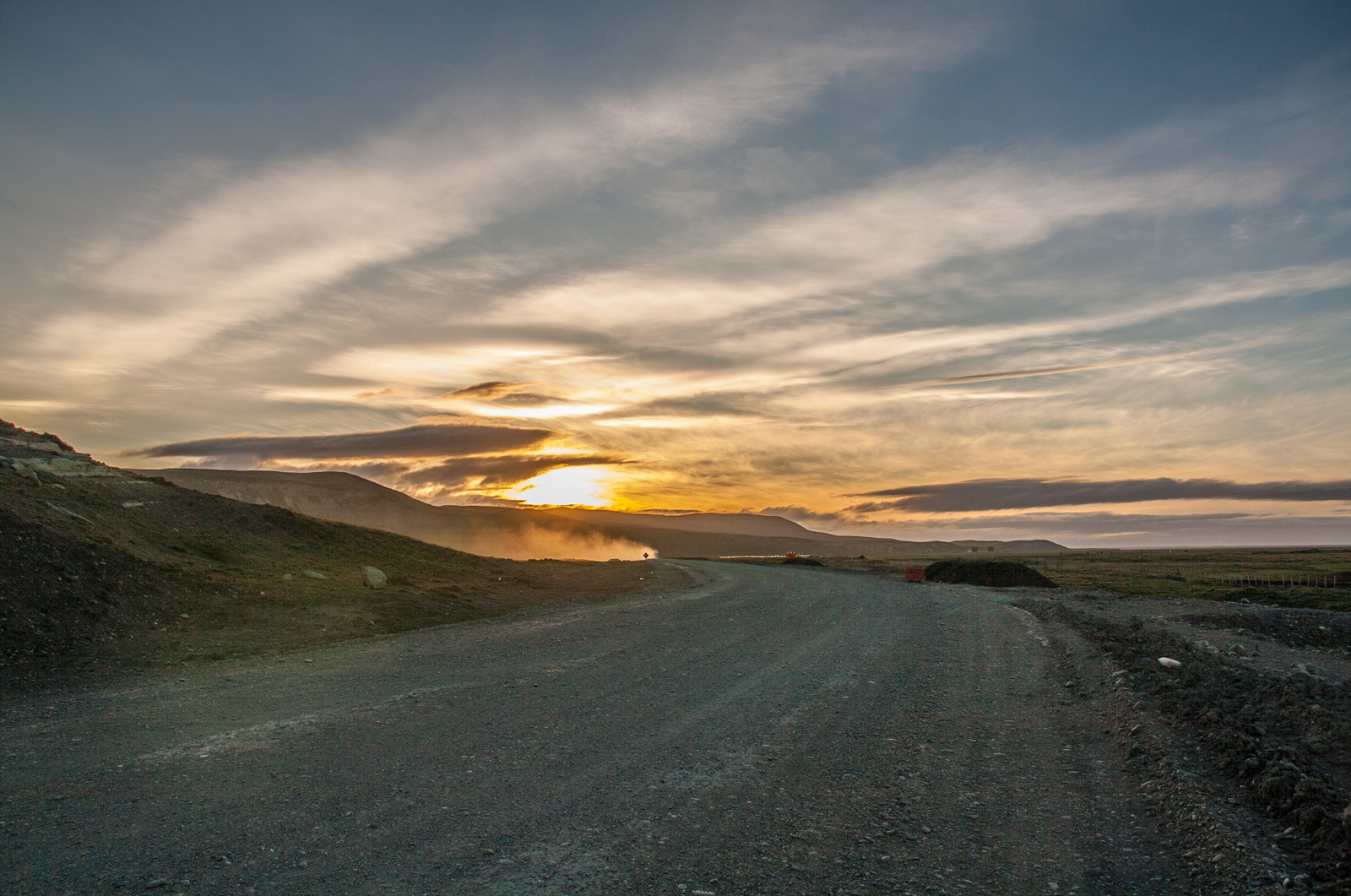 It was gone 1am when I finally decided it was time to go. I didn’t want to get to where I believed the shelter was located in the dark – I had no idea what I was looking for and didn’t want to miss it.
I profusely thanked the immigration staff, zipped up and went outside to greet the chilling wind. It’s the whining as it rushes past a building or flag pole at speed that gets to me. A portentous threat of what’s still to come.

I set off, clearing the lights of the border post wondering again what the hell I was doing. I told myself, over and over: 25km, that’s it and you are still in the game. There was very little traffic; the second car I passed stopped and gestured me over. I thought he wanted to check I was alright, but instead he asked directions. I laughed and apologised – I’m not from round here, I told him.

The wind turned up its intensity until I was once again struggling to keep the bike pointing forward. The bags acted like a sail, shoving me into the deep gravel where I would have to stop to avoid falling over. I checked my distance after two hours and found I had barely done 12km. I thought then I wasn’t going to make it, but I couldn’t turn around so I had to throw all my chips in. I focused the anger and frustration into pedalling motion and emptied my tank.

Finally at around 5am, with the sun rising I saw a shelter. I knew it wasn’t enough kilometres down the road – it was 3km short. In my exhausted state I convinced myself to head on. I made another 300m or so down the road before reality kicked in and I turned back around. Once inside the shelter, the force of the wind evaporated. It was a glorious feeling. I ate heartily, then got my sleeping gear out, laid it out on the metal bunk frame and slept for nearly seven hours, broken only by another quick meal.

I decided to leave at 3am the next morning, Sunday, to make the 20km to the next shelter, another bus stop. The forecast told me Monday would be less windy, so I got going. Getting out of my relatively warm sleeping bag at 2am was a feat in itself, but the motivation to make it to Porvenir was enough to drive me on.

The wind was bitingly cold. Thankfully the physical effort of riding a laden bicycle into a crazy headwind soon warmed me up. I made it to the bus stop and found a hut with a door – amazing! Time for another breakfast and a rest. On the roof of the shelter someone had drawn a map of the road showing where travellers could seek some respite from the wind. There was apparently an abandoned building another 20km down the road. I aimed for that.

Then a strange thing happened. The wind died down, no longer gusting in waves; instead it simply chilled me. It started to become enjoyable again – there was no traffic on the road, a pristine blue sky and the Magellan Straits in front. There was even scattered foliage by the road and the occasional running lama. I carried on past the abandoned building, to Estancion Amonium where four old men live and tend to their land. They let me camp for the night and filled me up with as much water as I could carry.

By Monday, again beautiful, the road became undulating and hard, but it also sheltered me from the wind. I camped just short of Porvenir, in a spot out of the wind and with a majestic view. There was no point riding into Porvenir as there was no ferry until tomorrow – I would only end up in an expensive hotel. When Tuesday came the wind was back, but I knew that even at the slowest pace I would get there in a couple of hours. The road surface was loose and bumpy, but my frustration soon vanished each time I considered what it had taken to get here. Arriving in Porvenir was a milestone, a reminder to look back on. If I don’t try, then I’ll fail and always regret it. Yet if I try, I may just succeed.

Iain Denley is a dreamer who finally turned his dream into his reality. Attempting what he feels is impossible for him to achieve, by cycling from Argentina to Alaska. His aim is simply to encourage others to go beyond their fears and doubts and try to achieve their impossible, whatever that may be.

The Peruvian Grind Between Mountains and States 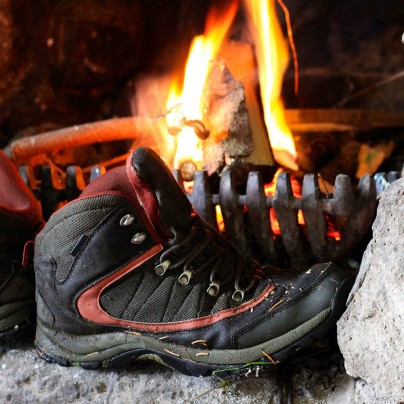 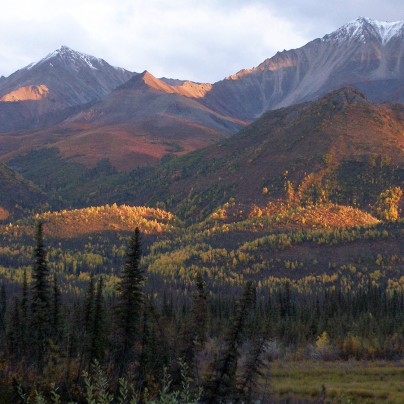 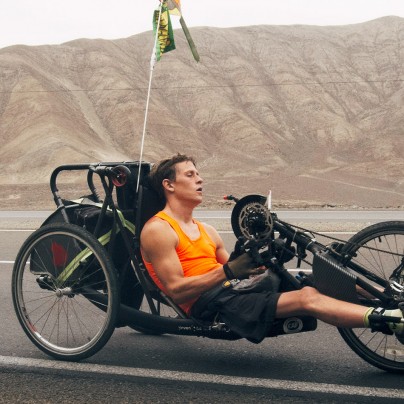