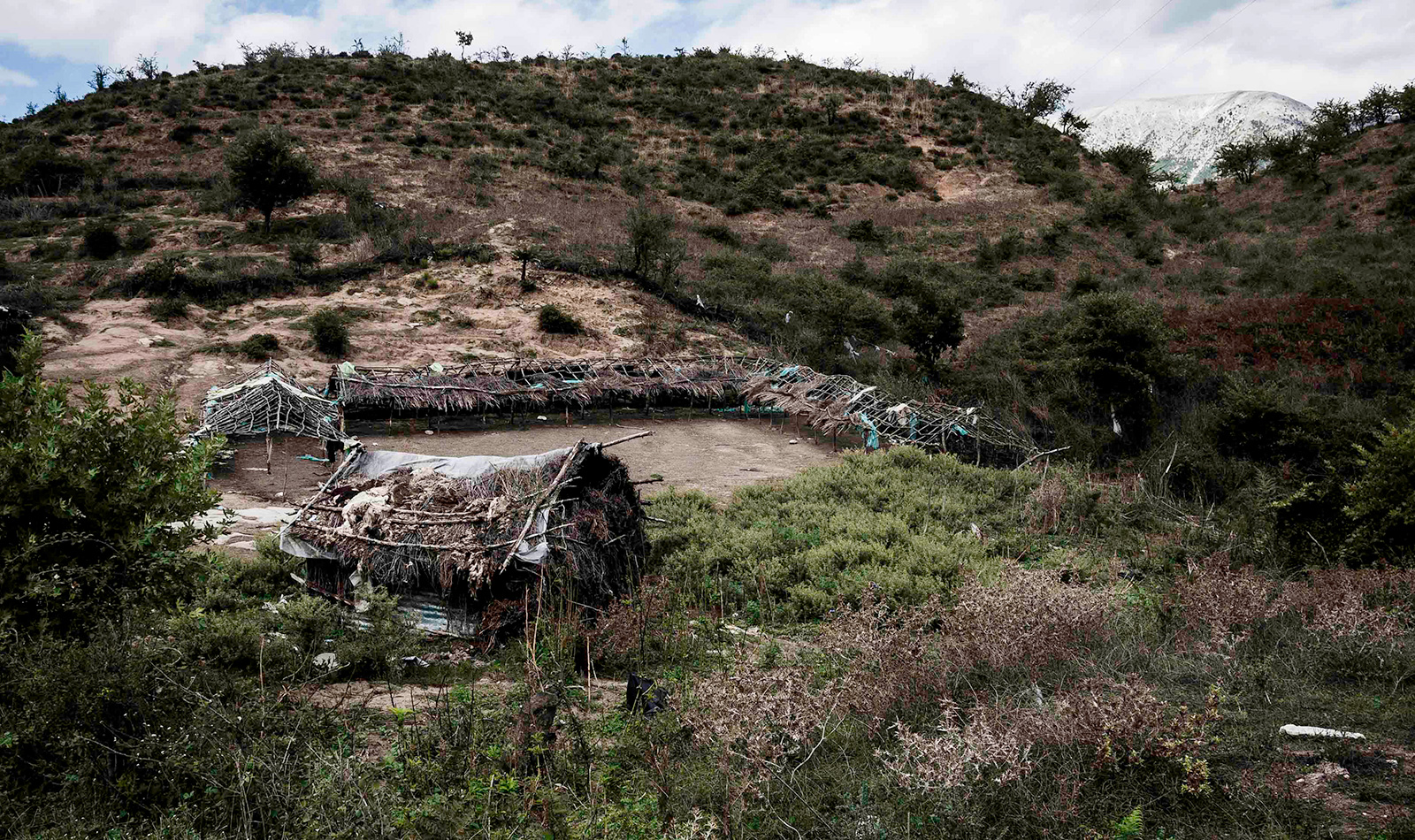 Between Mountains and States

When bad weather forced Matthew Gibbons off his planned route whilst trekking in Albania, he found himself stumbling into Europe’s biggest cannabis farm. He tells Sidetracked the story.

Trekking towards the peak of Albania’s Sopoti mountain, we watched a dark cloud shroud the radio mast we had been aiming for all morning. It submerged the entire summit of the 1500m peak and, with it, our route. We found ourselves faced with a choice: continue our journey along a ridgeline, or bypass the summit and head down the eastern slope. Neither option was appealing. The ridgeline was exposed and, with the weather closing in, we didn’t want to take any risks. Yet the eastern slope posed a threat, too: this route would take us straight into the remote village of Lazarat, rumoured to be home to a large marijuana farm.

When my friend, Ally Lomas, and I made a plan to spend three days hiking in southern Albania, from the coastal city of Sarandë, in Vlorë County, 26 miles north-east to the city of Gjirokastër, we didn’t know what we’d be letting ourselves in for. We wanted to travel on foot to help us connect with the country’s rural landscape and allow us to get a deeper understanding of the regions between towns and cities. But after arriving by ferry from Corfu into Sarandë, problems quickly began to emerge.

The first sign that danger lay ahead came on our first night. When we told the owner of our guesthouse our plans, he became agitated. ‘There might be some danger,’ Tomorr told us, ‘but it is Albania so no one will harm you’. When he started talking about local drug cartels and battles with the police, it became difficult to separate fact from fiction. We thought he was exaggerating so we stood firm on our intention to walk.

Hiking out of Sarandë on our first morning, the scenery gave way to tall cliffs of rock, pitted with villages that clung to hillsides. We met only a few people. A hunter with a shotgun slung over his shoulder shook our hands and muttered something in Albanian, then Greek, before moving on. Cars paused to offer us lifts but moved on, confused when we didn’t accept.

That evening we stayed in the town of Delvinë, bunking at the house of an artist, who we had met in a café earlier. Our conversations with the locals were limited; very few spoke English, and we had only learned a few basic Albanian words.

The following morning, we trekked up Sopoti mountain, part of the Balkan state’s Mali i Gjere mountain range. A man with a donkey cackled at us, and, with a toothless grin, patted the worn satchels on his donkey. Mules are the main mode of transport here: there are few roads, so only donkeys can traverse the mighty peaks.

Once we’d made the decision to head down the eastern route off Sopoti, rather than walk along the ridgeline, we rested. A stiff wind from the coast ruffled our rucksacks and scarves. I looked back to see where we’d come from: the road we had followed traced the valley, eventually melting into the Adriatic, miles away. Ahead, jagged rocks and dry land gave way to a lush broad valley of pine trees. But we could not see a path. We had little choice but to head to Lazarat – and risk walking into the cannabis farm.

A stiff wind from the coast ruffled our rucksacks and scarves. I looked back to see where we’d come from: the road we had followed traced the valley, eventually melting into the Adriatic, miles away. Ahead, jagged rocks and dry land gave way to a lush broad valley of pine trees. 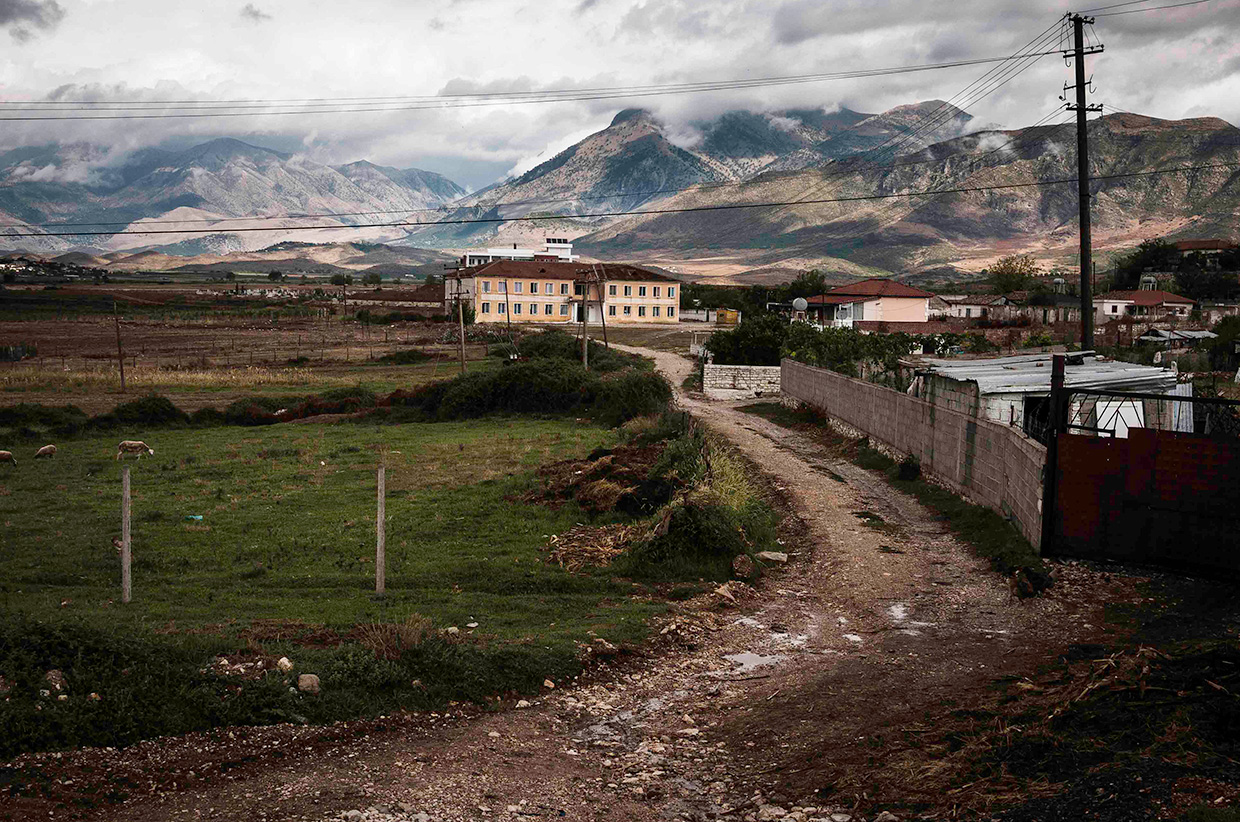 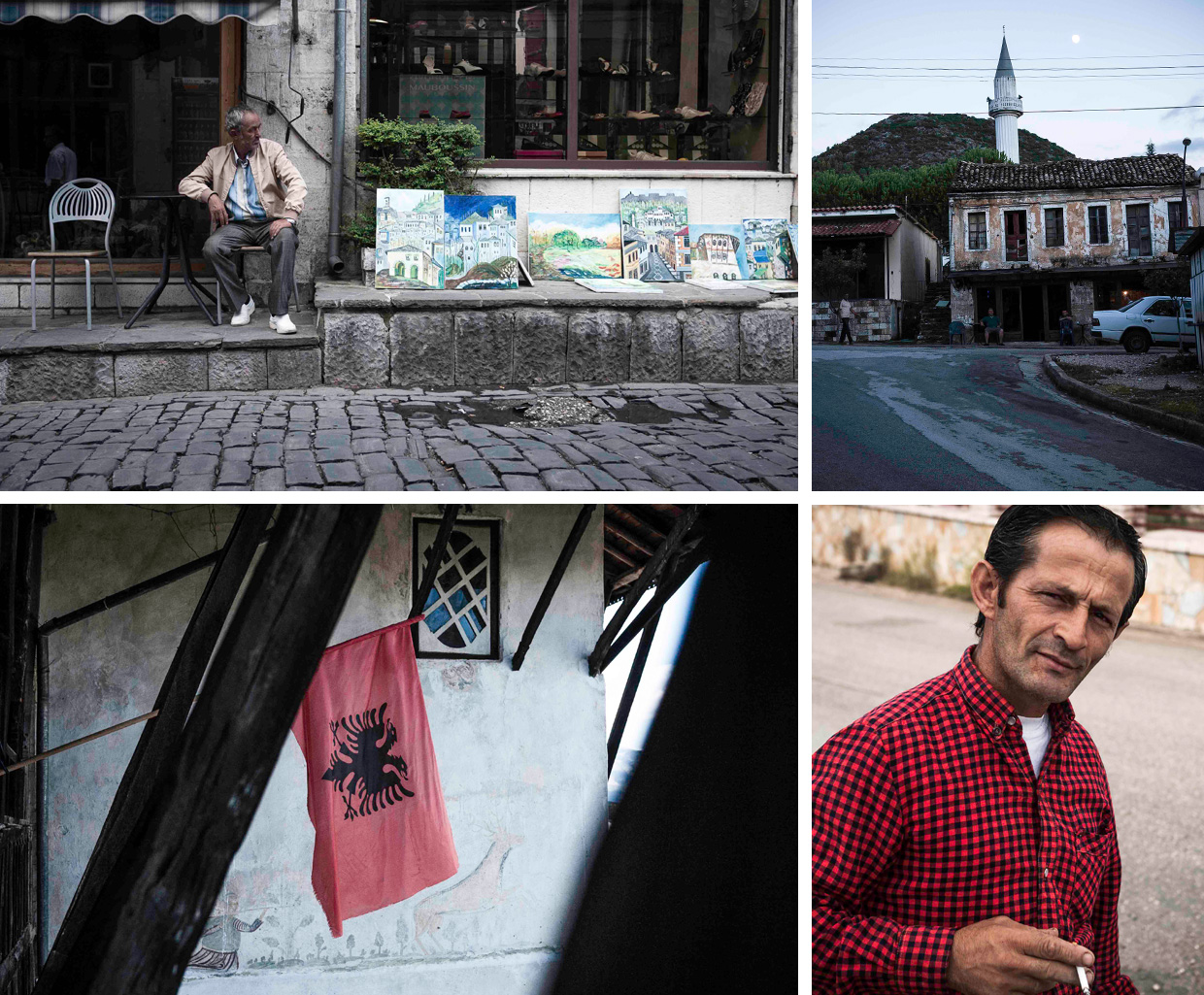 By mid-afternoon, at the base of the mountain, we came face-to-face with what we’d feared: in front of us lay a vast field of cannabis plants, casting long shadows on the ground. The plantation stretched up the hillsides and disappeared into the far distance.

As we descended, I tried to focus my thoughts, but they drifted to what might be waiting for us below. We could see the white specs of Lazarat in the distance. Until now, we had encountered a few people, but now there was no one.

There was silence in the valley as we pressed forward. The only sounds were the faint rustling of branches in the wind and the tinkling of sheep’s bells. In the distance, the air was punctuated by the shrill noise of gun shots, but we ignored them, assuming they were hunters. In any case, we were too busy searching for a clear path to worry about anything else.

By mid-afternoon, at the base of the mountain, we came face-to-face with what we’d feared: in front of us lay a vast field of cannabis plants, casting long shadows on the ground. The plantation stretched up the hillsides and disappeared into the far distance. As Ally and I tried to find our way out, we passed a gate, decorated menacingly with a goat’s skull. We continued up a hill, and I looked back at the gate to see the silhouettes of two men emerge. They paused, looked at us, then unloaded a volley of gunshots into the air. Three consecutive shots echoed out between the valley walls, no doubt to warn us that we were trespassing.

We wanted to get out as quickly as possible but, unsure of our route, we had little option but to go back and ask the men directions. We hoped that caution and hospitality would see us through. Albanians are famous for their hospitality, but there was a lot at stake here: security, discretion, money. I had no idea what would happen.

The men wore sport clothes, loose denim jackets and cigarettes hung from their lips. They seemed friendly and shook our hands, but seemed unsure what to do with us. ‘Send them back up the hill,’ one appeared to say. ‘No, let them pass,’ another gestured. One of the men, armed with a rifle over his shoulder, gave a big grin and asked us if we wanted a cigarette. It seemed to break the ice. The guards appeared confused by our presence, but, after managing to convince them we didn’t have any cameras on us (we did – but they were hidden deep in our packs), they ushered us through.

It took over an hour to walk through the plantation. It was huge; far larger than either of us had anticipated. Cannabis plants consumed the valley walls, basin – and even the front lawns of homes. Loose leaves dried on blankets in fields. Behind chicken-wire fences, I saw leaf pickers at work, and middle-management barking orders to staff. Silver Mercedes cars occasionally weaved between the enclosures. 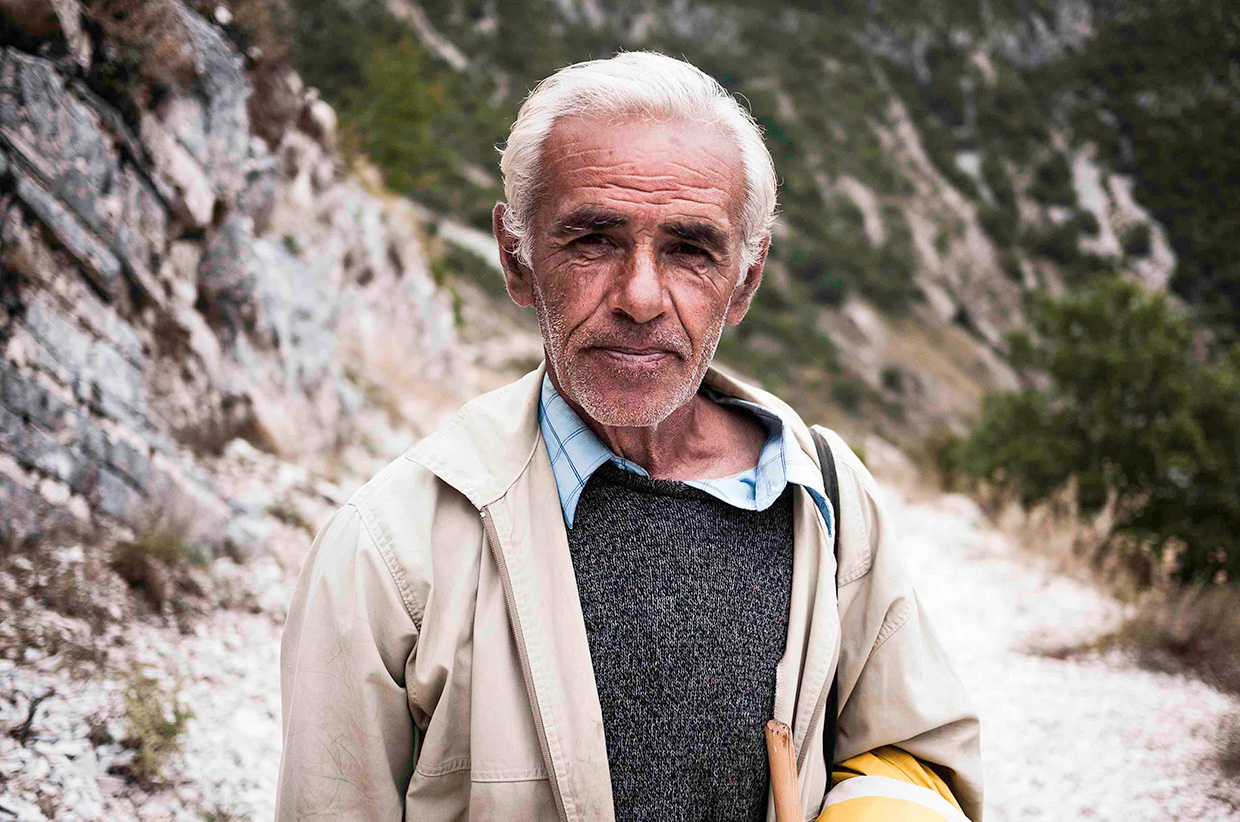 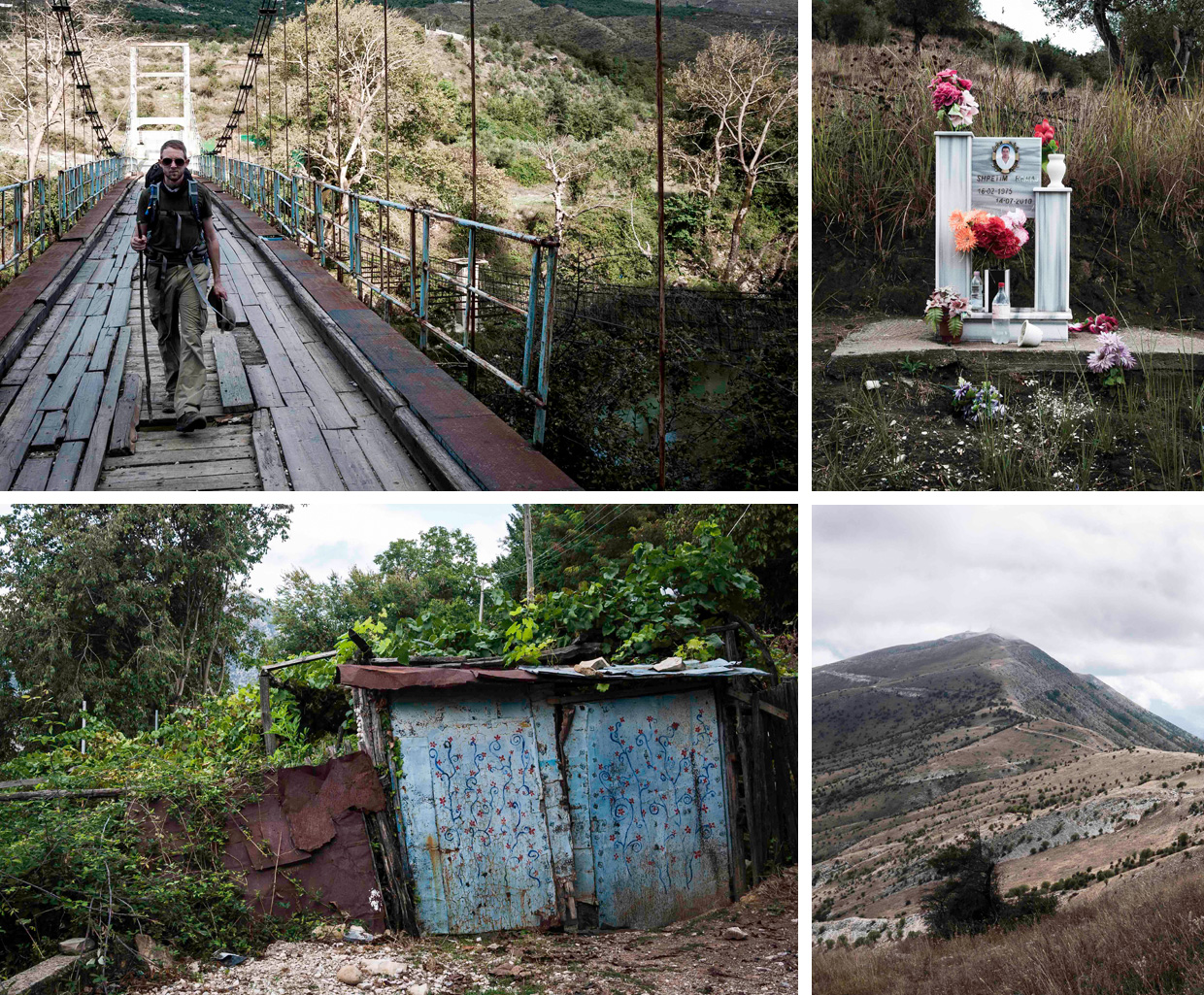 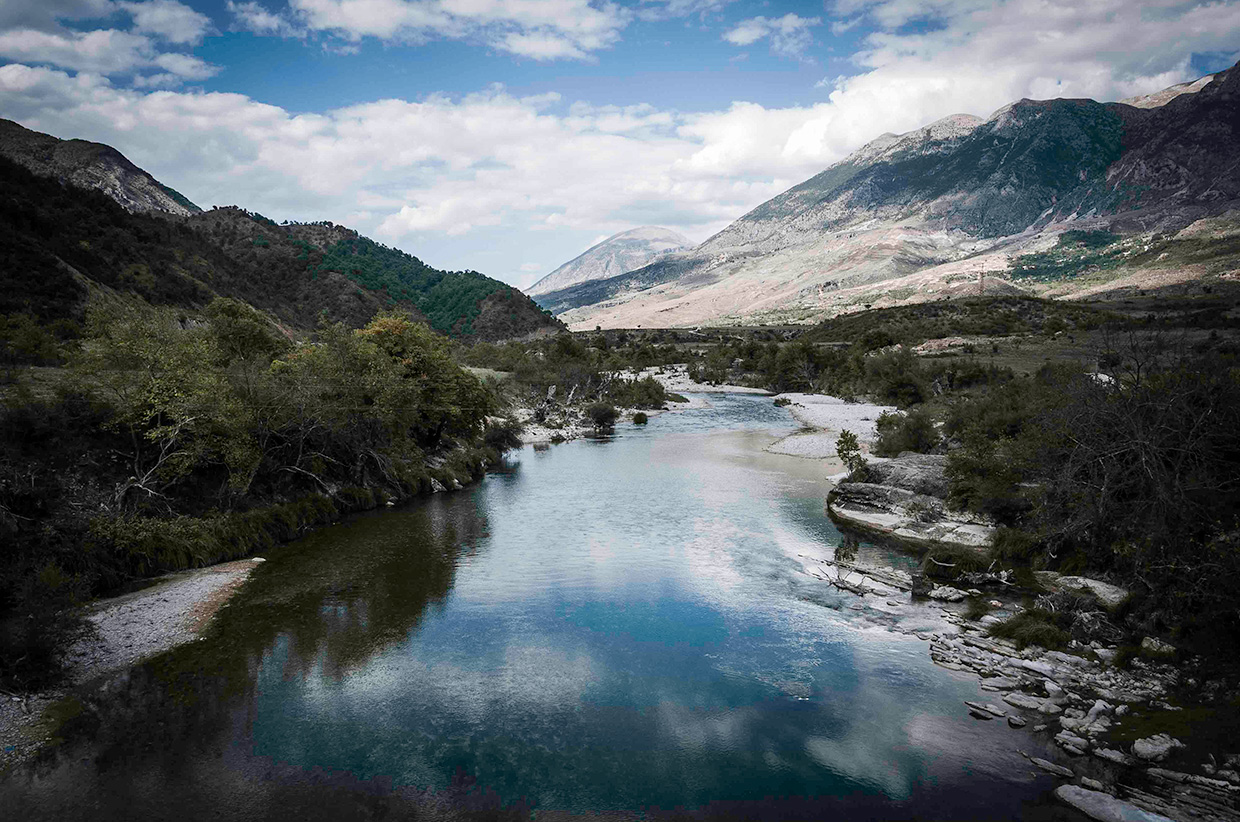 Through fatigue, we trod carefully, alert to the faintest sound of snapping trees, or voices from the fields. I wondered what equipment was used to farm this drug, and how much the operation was worth. Occasionally men approached us, but only to ask our names and shake our hands. Alongside the path, dry produce lay open in the naked sun. Ally and I were surprised at how freely we were allowed to walk through the plantation.

When we finally found our way out, I glanced back at our route. It was easy to see why this location had been chosen to grow illegal produce: the farm lay in a valley, with just a single track leading into it, meaning arrivals would instantly be spotted. There were no check points, barriers, or guards – just a road which stretched endlessly into the distance. The sharp walls of rock melted into a broad valley. What should have been a six-hour walk had taken closer to ten.

That evening, arriving in Gjirokastër, we tried to come to terms with what we had just seen. We felt exhausted and uneasy. Under the evening sun, we paused outside a police station and looked through a chain-link fence. Officers leaned on car bonnets and smoked cigarettes, laughing. For a few moments we watched them go about their business. It all felt so normal.

Just a few months after our trip, Lazarat hit the headlines. Police had raided the cannabis farm, sparking a three-day shoot-out in which farmers attacked them with rocket-propelled grenades, heavy mortars and machine guns. Lazarat, we learned, had been Europe’s biggest marijuana-growing operation, employing 3,000 labourers, and producing 900 metric tonnes of cannabis a year. The annual profit was a massive £3.6bn, equivalent to almost half of Albania’s gross domestic product. If we’d travelled there a few months later, our story could have been very different. I left Albania wondering what else lay between its mountains.

Matthew Gibbons is a travel writer and charity worker based in London. He has lived and written about South East Asia and the Balkans.
Website: matthewgibbonswriting.com

Alastair Lomas is a photographer with an interest in cultural heritage and migration.
Website: alastairlomas.com
Twitter: @Alastair_Lomas

The Broken Man Songs of Rock and Wind 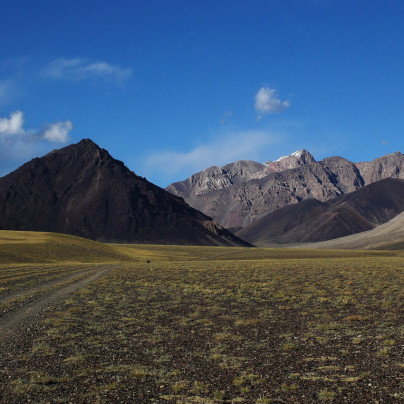