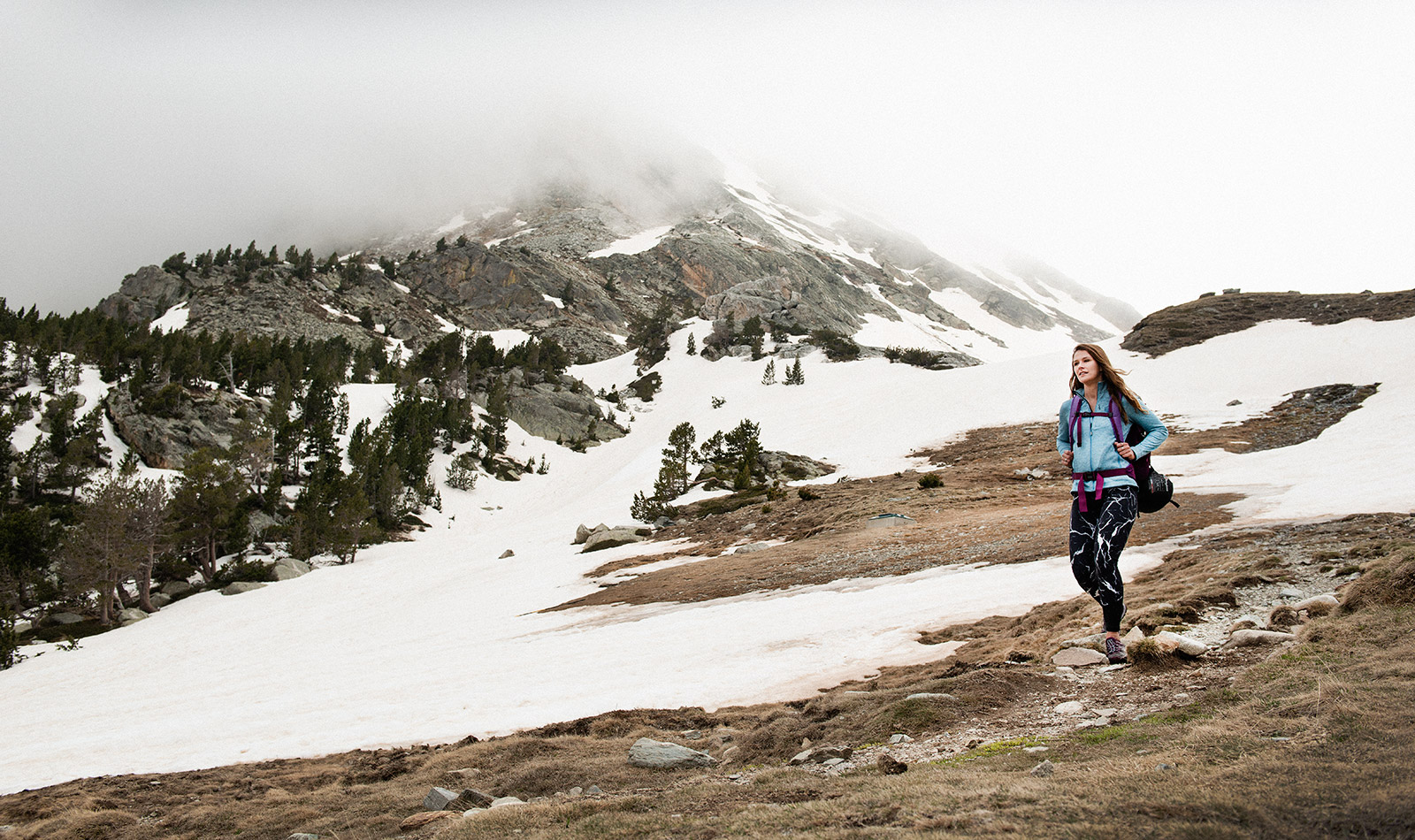 We want to understand the river, the people who live by it and the wildlife that calls it home, and to examine the delicate ecosystems surrounding these fragile waterways.

Every river has its twists and turns, and the Ter, which runs through the heart of Catalunya, is no different. Our short journey, in partnership with KEEN Footwear, follows this little-known river upstream from its confluence with the Mediterranean in search of its source high in the Pyrenees.

Going against the natural flow of the river is not about racing through the changing landscape to reach the source. It isn’t about the quickest time nor the physical challenge; instead, we want to understand the river, the people who live by it and the wildlife that calls it home, and to examine the delicate ecosystems surrounding these fragile waterways. We seek a rhythm that allows us to meet the people along the river, understand how they use this waterway for pleasure and, most of all, why it is such an integral part of their lives. When we disconnect from our day-to-day life for just a short time, I think we’re able to genuinely connect with ourselves and the people and landscapes around us. We seek a better life balance, and more time outside within better environment. To do this we need to take action.

The journey starts in a way that feels most natural to me: paddleboarding. After navigating the tricky rips and swells from the meeting of the river with the Mediterranean, suddenly all is calm. Guiding the board up the river’s mouth, almost in silence, immersed in the natural beauty of the surroundings, it’s hard not to feel removed from the world. It’s a good leveller, and the simplicity of paddling gives me an unparalleled sense of perspective.

Since I first took to the paddle just three years ago, it has become a huge part of my life. I feel protective of our waterways both in the UK and around the world, and have a deep connection with them. Paddling shows how humans and wildlife intertwine to use the water – for both enjoyment and livelihoods. 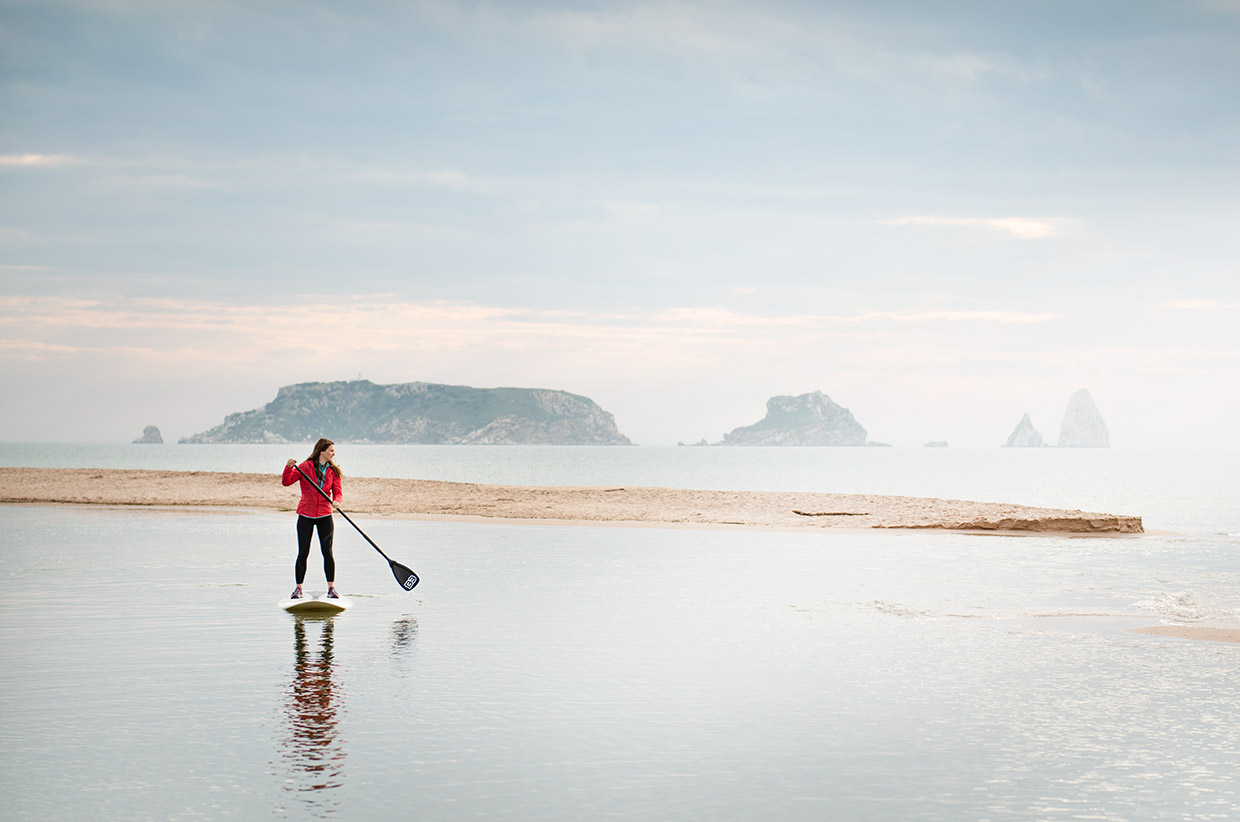 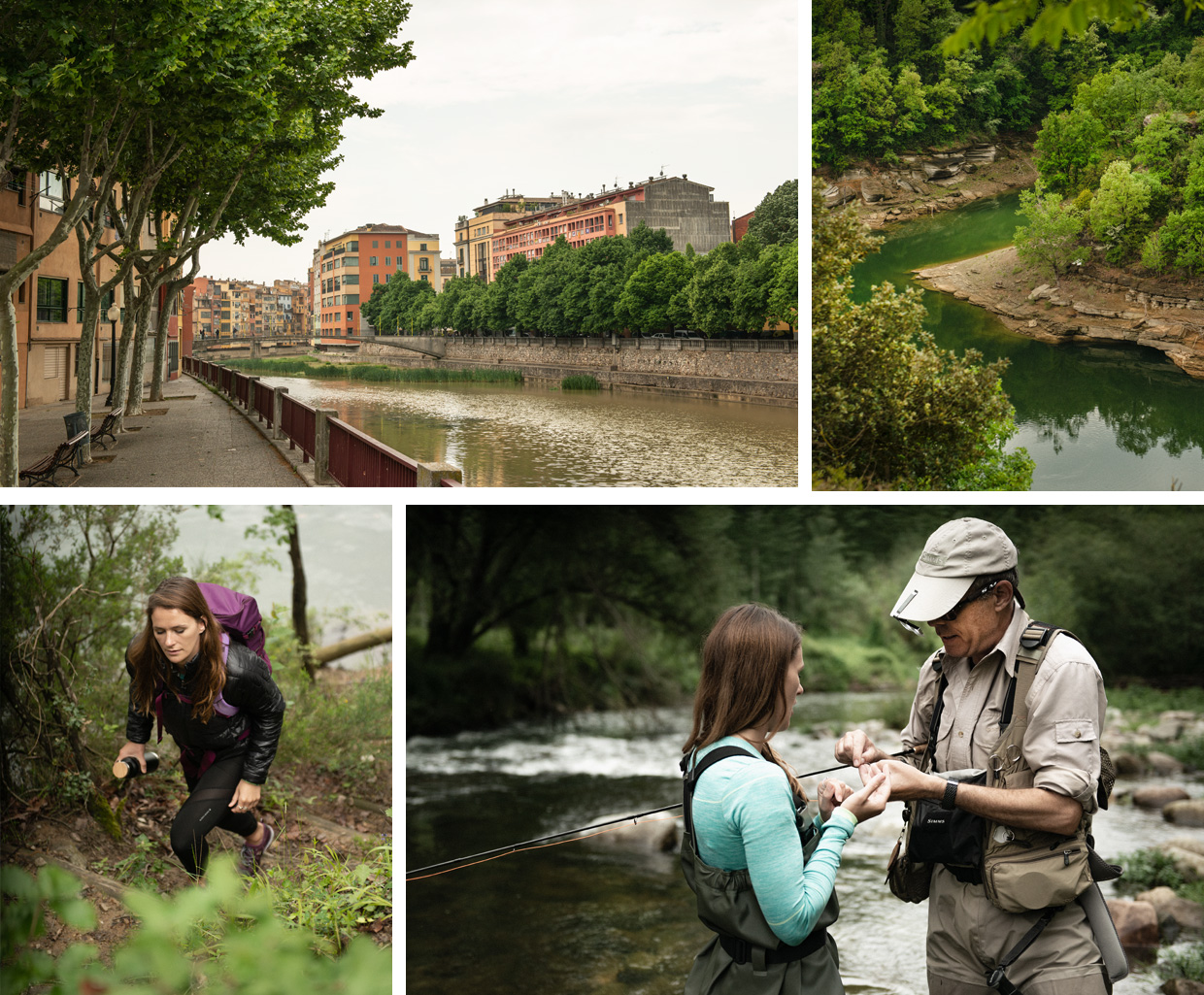 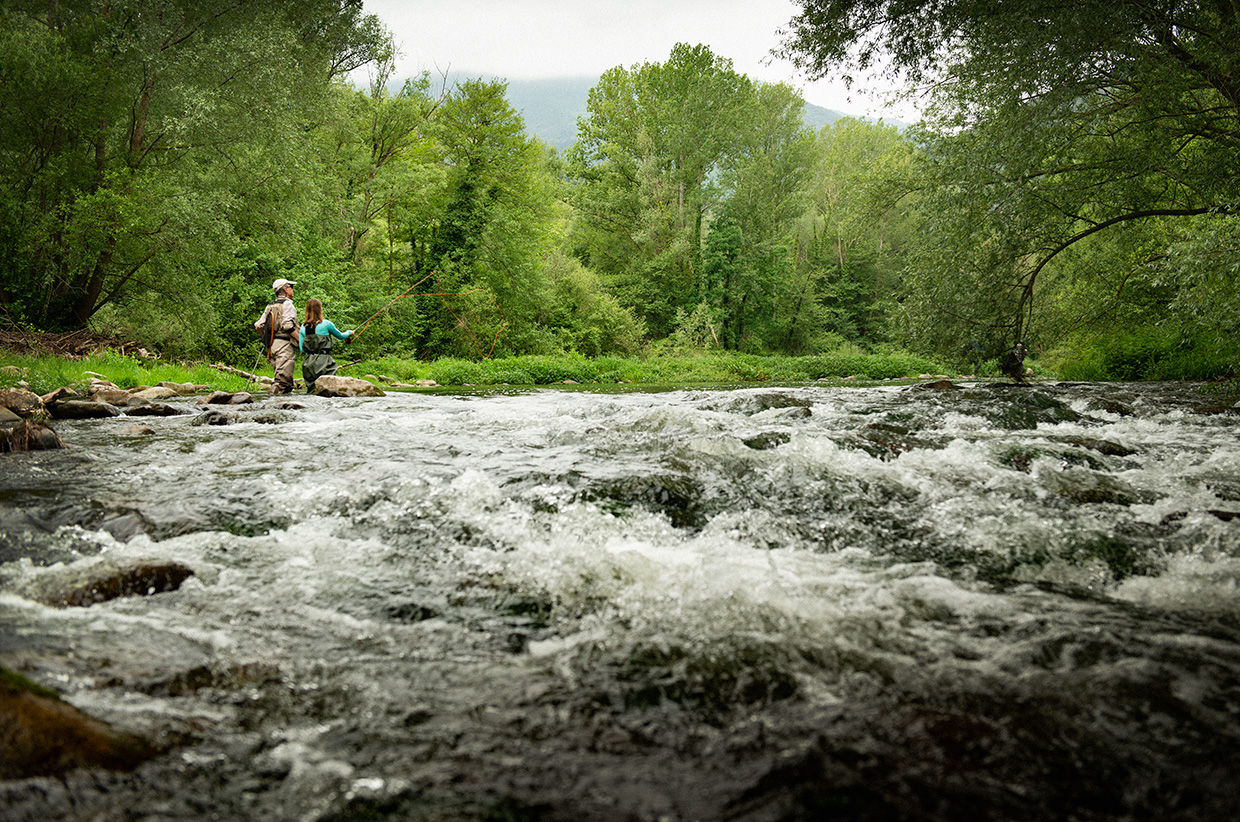 The paddling leg of the journey is over all too soon, and I hop on a bike to reach the city of Girona. Here, the landscape shifts from open countryside to small conurbations on the city’s periphery before finally entering the heart of Girona, a city that grew around the River Ter. We take time out to explore the city’s cobbled streets and medieval architecture. The Romans were the first to build permanent buildings in the area – an area that has been fought over ever since. Its position on the convergence of four major rivers, including the Ter, was a prime strategic location. Today, it is tourists and fishermen who enjoy the river.

Further upstream we meet one of those people. Local fly fisherman Carles has enjoyed his sport on the Ter for more than 20 years. He’s patient with me, simply wishing to share his passion for the sport. It’s a joy just watching him, thigh deep in the fast current, effortlessly flicking the rod, completely immersed in the moment. He talks with passion and enthusiasm about the river and his relationship with it, sharing tales of his experiences along the water; but he also talks about how much it has changed since the dams upstream were built. The barriers have had a severe impact on the river’s flow and depths, and – most importantly – the ecosystems that rely on it.

Rivers should be unstoppable forces. They carve and shape the landscape from a trickle in the mountains to the ocean. Untamed rivers provide life for animals and humans and offer a place to escape and to reflect. They provide a steady supply of water for farmers, a place for trade and transport, and for communities to come together. A river is a place for connection along its meandering path.

But like so many rivers around the world, the natural flow of the Ter has been disrupted. Seeing the scale of the dam for the first time was heartbreaking. The largest wall, spanning 360m and standing 135m high, stems the natural flow and controls the release depending on energy and water usage in the major cities. Its steep, concrete sides break up the natural flow of the water and commands attention, detracting from the once wild and bucolic views that make this place so magnificent. Downstream, a habitat misses out on essential nutrients and oxygen. Upstream, huge lakes are formed. The damage is irreversible.

Rivers should be unstoppable forces. They carve and shape the landscape from a trickle in the mountains to the ocean. Untamed rivers provide life for animals and humans and offer a place to escape and to reflect. 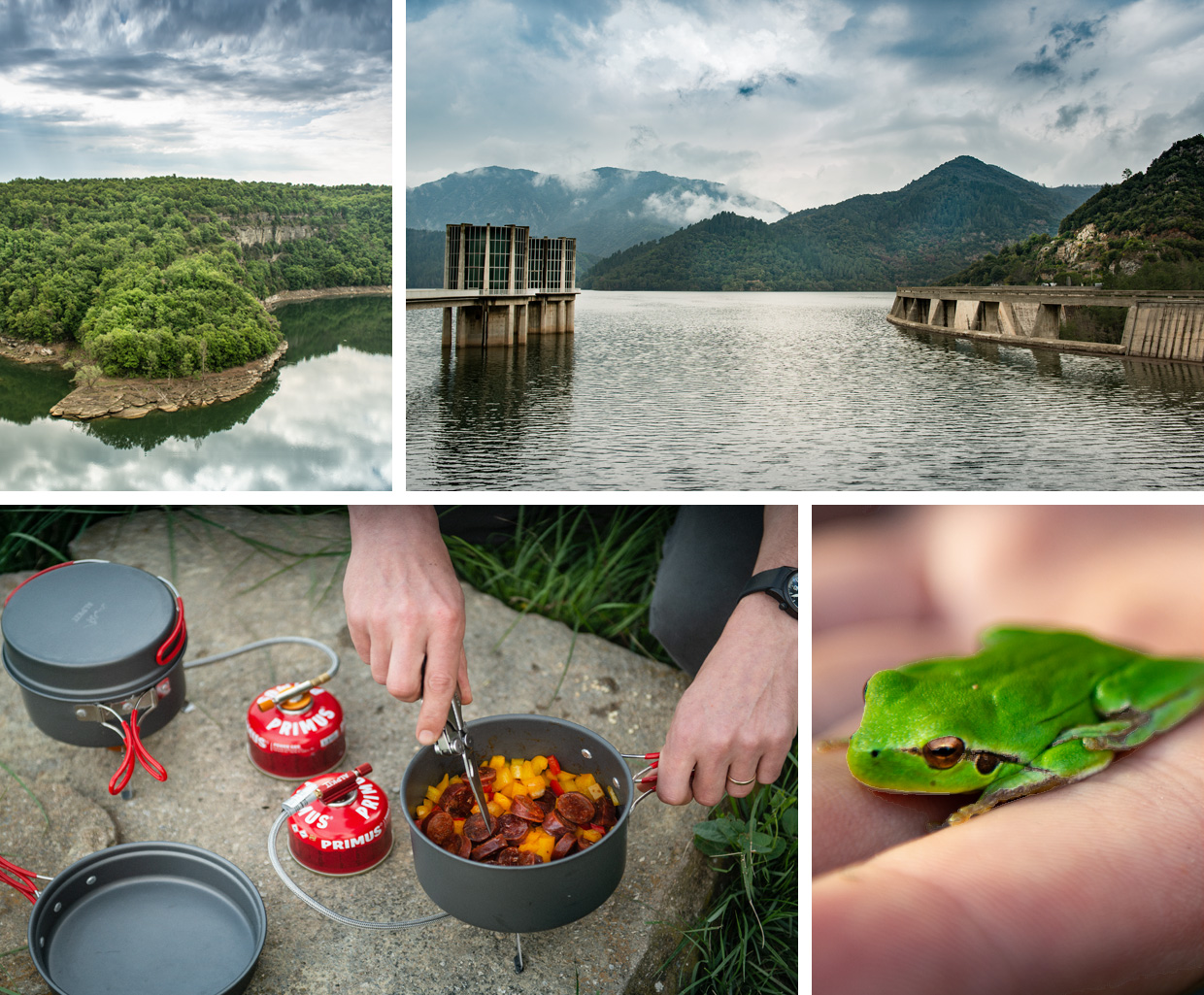 Above the dam, the river becomes a vast lake and we hike alongside it through verdant forest. Along the pathway, small man-made steps are cut out so lake fishers can access the water. Stopping at one of those points to fire up the stove and make a mug of coffee, I am reminded of these simple pleasures. Ducks glide over the water’s surface as the riverine birds circle overhead. There’s a sense of isolation – but also one of comfort – as we revel in the sounds of nature.

We continue along the winding river, higher up the lakeside path carved into the mountainside. We start to deviate from the water, moving further inland, as the high banks make it impassable by foot.

But some of the fishermen who, like me, use this waterway as their playground, a place to unwind, relax and gather some perspective, have left a Hansel-and-Gretel-style trail of destruction. The concept of ‘leave no trace’ clearly isn’t understood by everyone. I uncover beer bottles, cans of sweetcorn, wrappers, bags, and netting – either floating along the water’s surface, strewn across the ground or, in some cases, caught up in the trees and bushes that line the banks.

With heads low, we continue along the winding river, higher up the lakeside path carved into the mountainside. We start to deviate from the water, moving further inland, as the high banks make it impassable by foot.

The views, while impressive, rarely change at this pace. We push on by foot and decide to detour to an ancient Benedictine monastery, Sant Pere de Casserres, which sits in a defensive position on a great bend of the Ter. Here we see how human life can work in harmony with the river environment. Teetering high above the bend is the Sant Pere de Casserres (Saint Peter’s Castle). The monks first moved in during the 11th century on the site of ruins dating back to the 8th century – a castle built to fight the Moors. The building we see here has been mostly untouched since 1410.

Beyond the monastery, we climb higher towards the Pyrenees, through modern industrial towns and historic farming villages. We arrive in the relaxed, ancient town of Camprodon. The River Ter here runs under elegant stone bridges as slowly as the pace of life feels; the locals are going about their daily lives without, we assume, a care in the world. But on closer inspection, there is more to it. Banners of yellow ribbons hang from windows and balconies. I had spotted them further downstream too but they seem more prominent in this town. A metal bridge along the river is also lined with yellow ribbons, and I realise it is more than decoration. It is a sign of political unrest running through the veins of this community; an unspoken frustration vented through a united symbol and displayed at every turn. The current issue around Catalonia separating from mainland Spain is clearly still a raw subject. 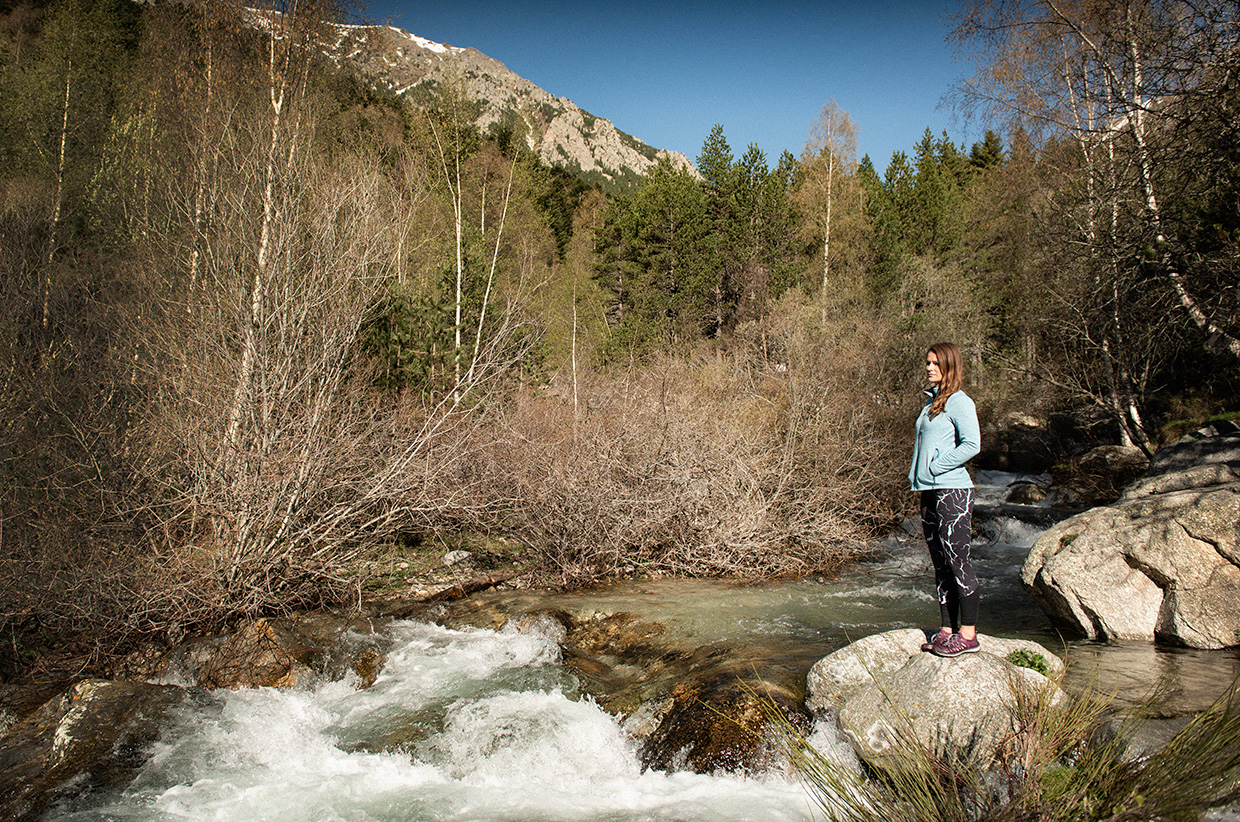 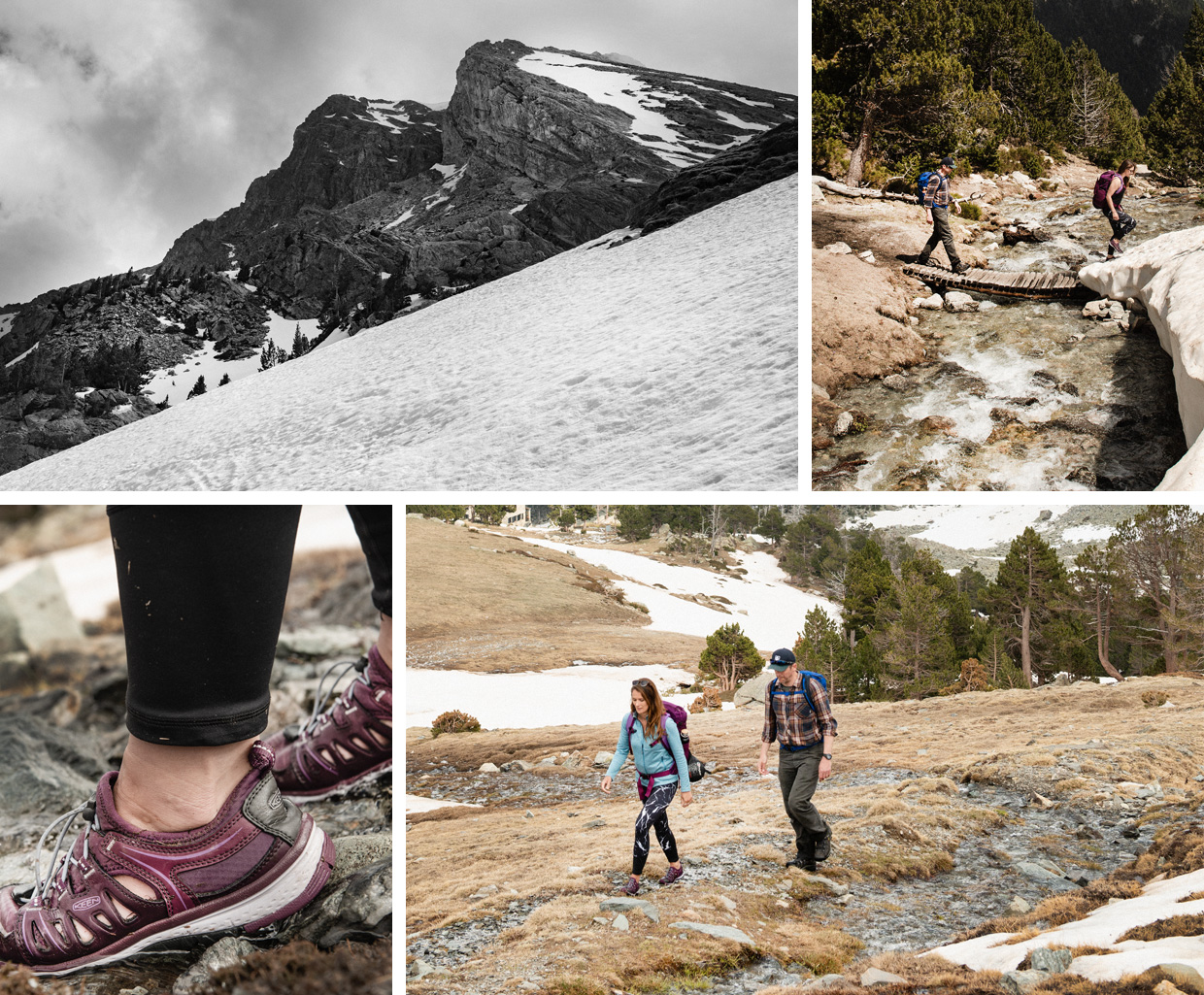 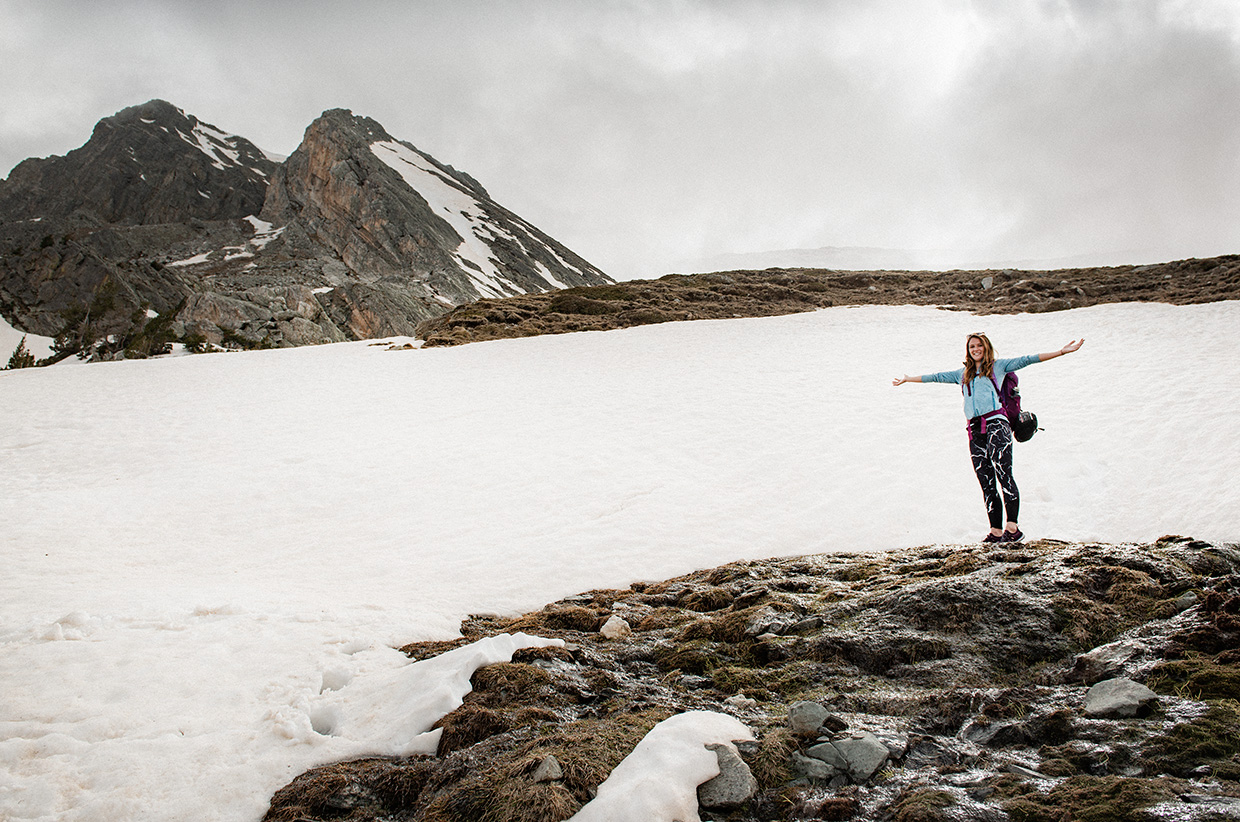 As we move higher into the Pyrenees, the river once again has spirit which in turn lifts ours. It feels as though we’re travelling back in time to witness the river in its infancy. It has an eagerness, a playfulness and innocence, that is to be expected of something so young. We’re enthusiastic and excited as we ascend higher into the mountains, embracing the challenge as it toughens and the river’s flow becomes more ferocious with the gradient. Feeling far from civilisation and the issues that lie downstream, we relish being in this environment – moving up through pine forests, close to the water’s edge and surrounded by mountains on a beautiful sunny day. Nature is giving us a real treat today.

We lose track of the stream several times above the snowline as it buries itself under thick sheets of ice, and then it briefly breaks through, clear and rapid. As we near the source, evidence of the river is almost non-existent. We stand in the silence of this dramatic mountainous landscape, listening for the sound of trickling water. Following the noise like a dog picks up a scent, we spot a small stream between a blanket of snow higher up. Here, we’re sure, is the source of the River Ter, 208km from where we started our journey just four days earlier. The source of this immense natural energy, beauty, and provider of life.

As we wander back down the mountain, we talk about the people we’ve met and the things we’ve seen. For me, water is a place of calm, reflection, and perspective, and over the course of this journey I have learnt that the people who depend on this river for their livelihoods feel the same connection as I do. Like the many twists and turns of the Ter, life too has its meanders through which we must navigate.

Live and breath summer on any trail with KEEN Terradora Ethos. KEEN Footwear makes shoes to make a difference and are taking action for a better world. Find out more about #BetterTakesAction. 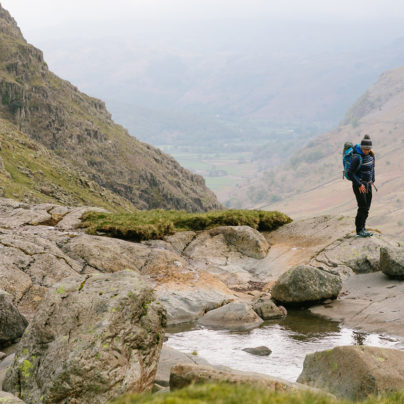